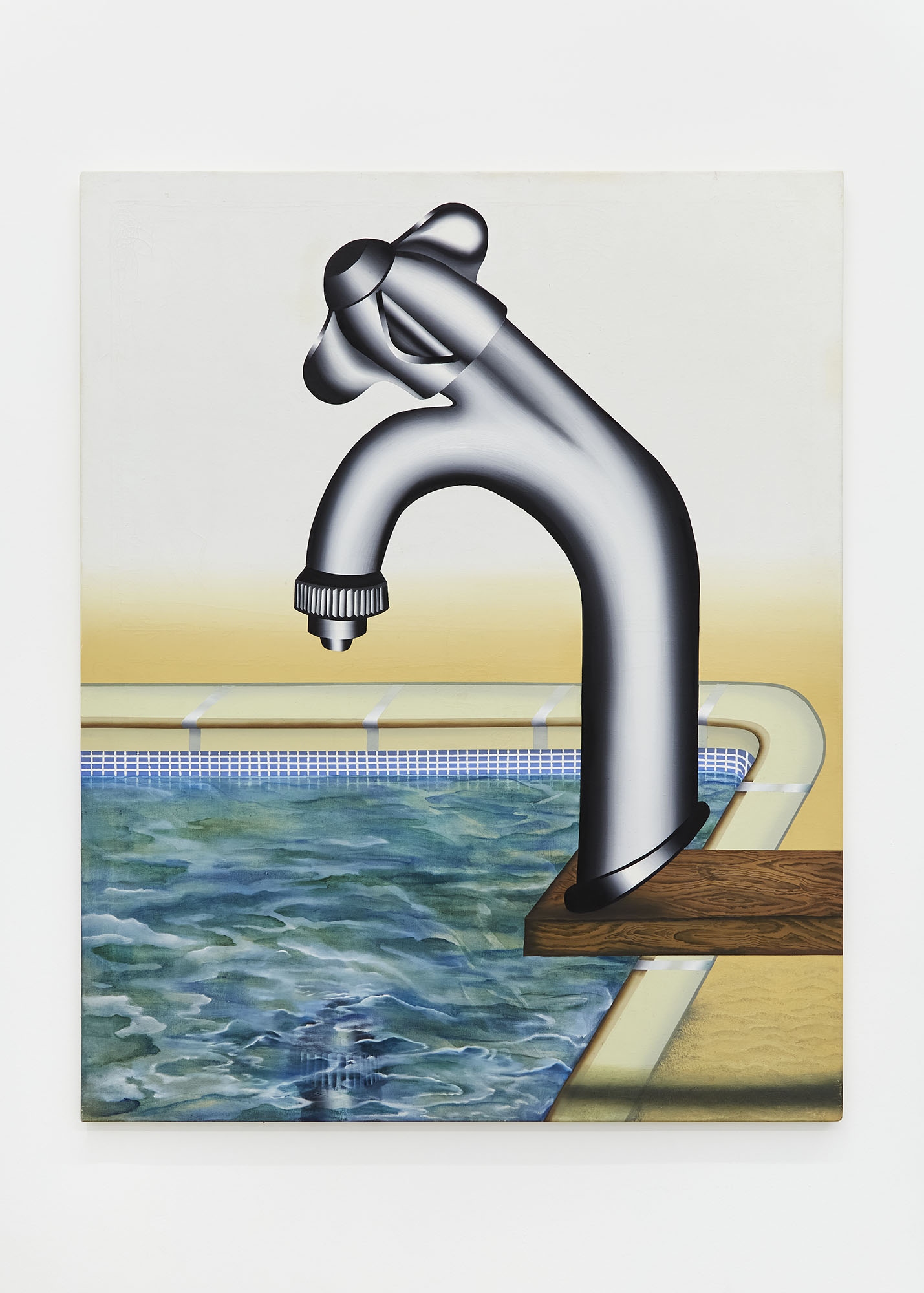 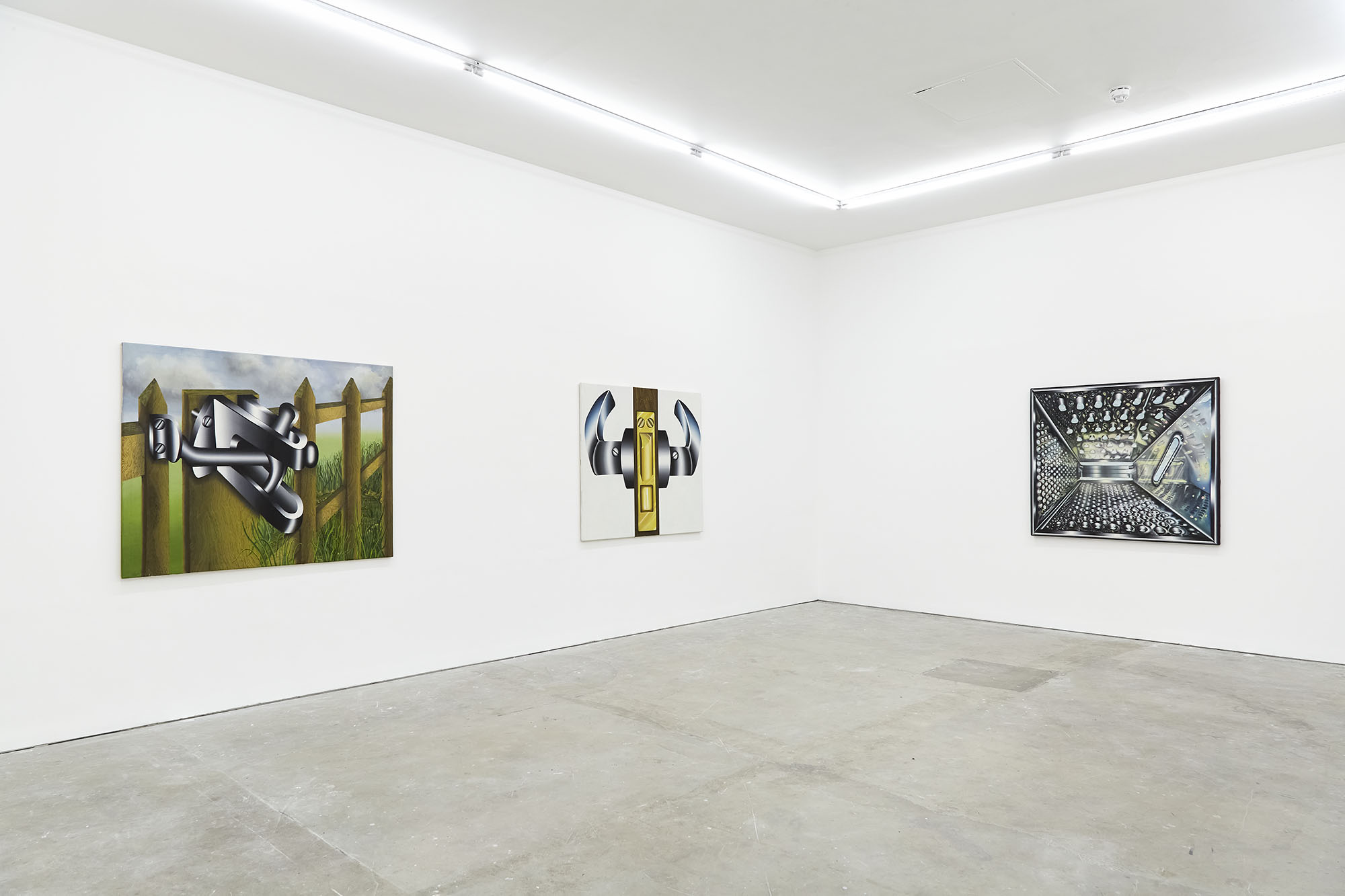 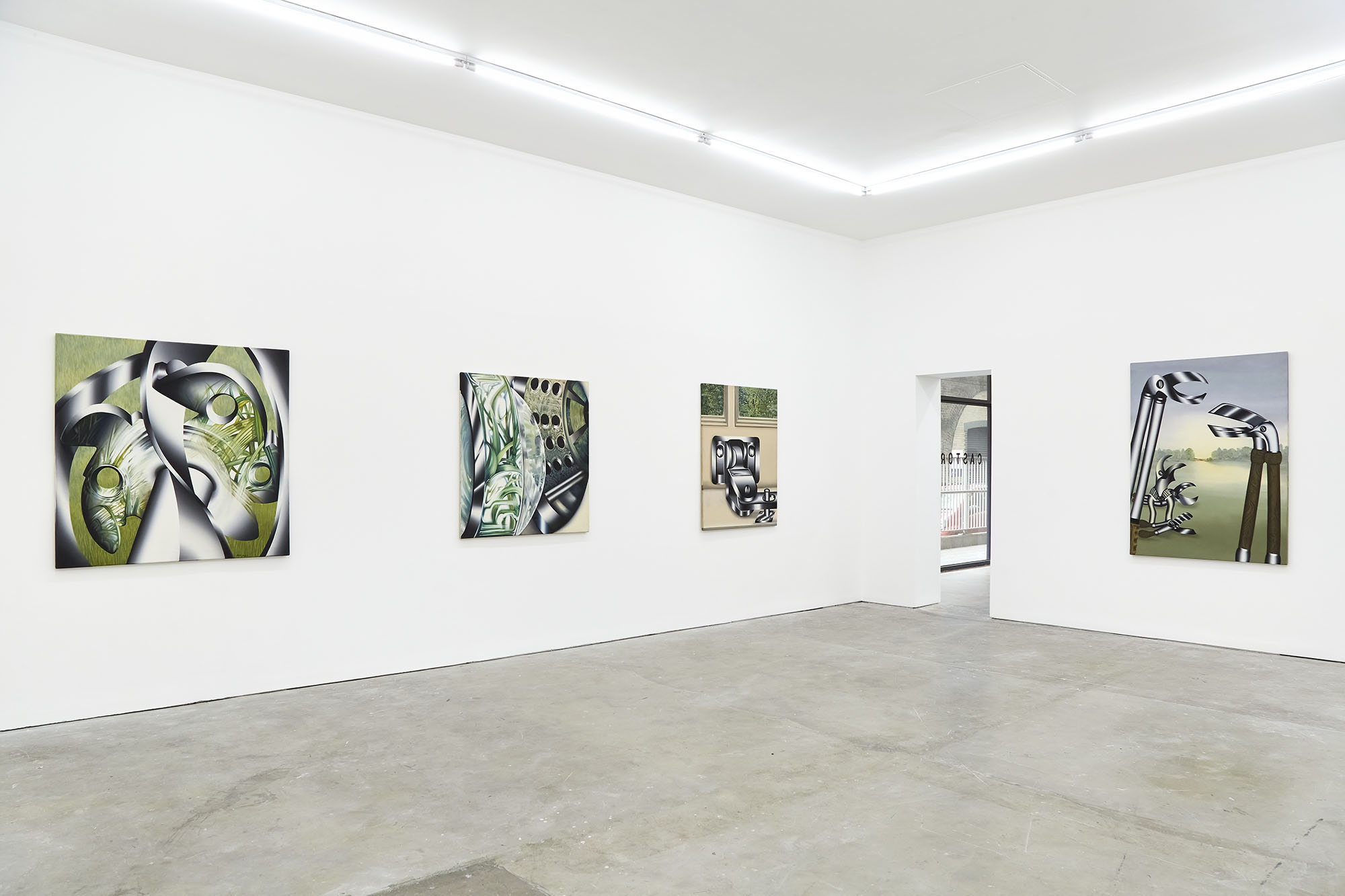 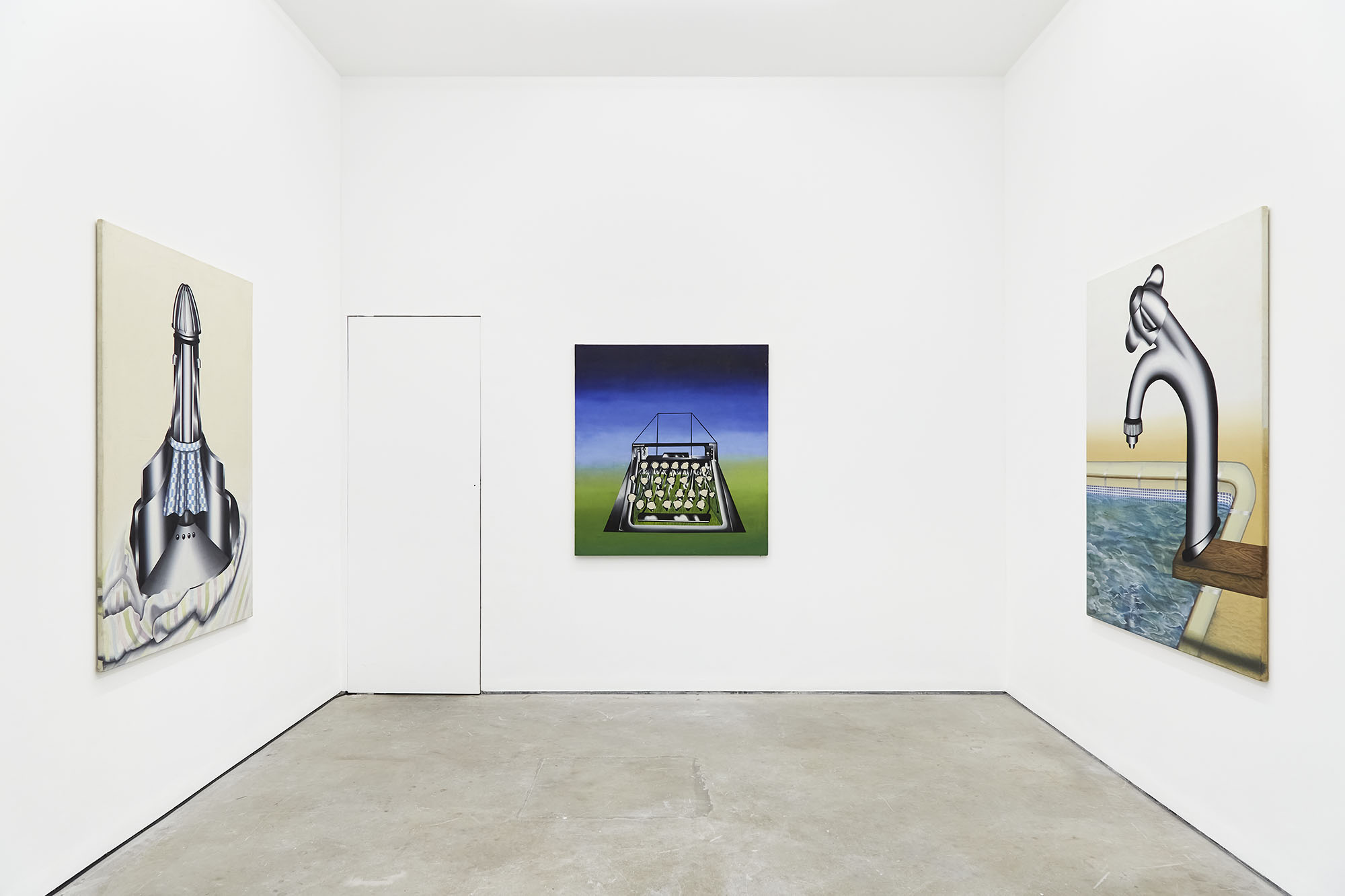 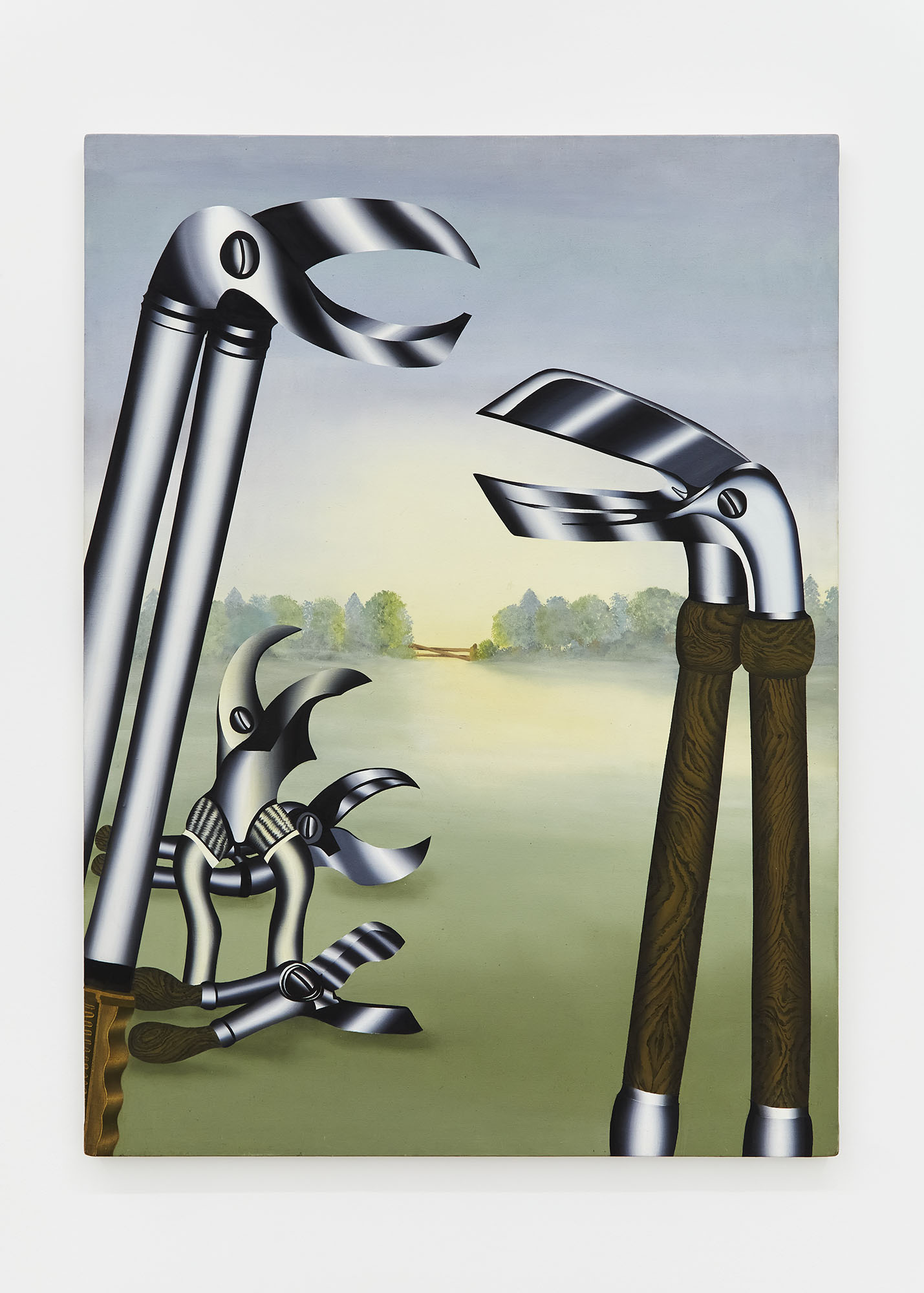 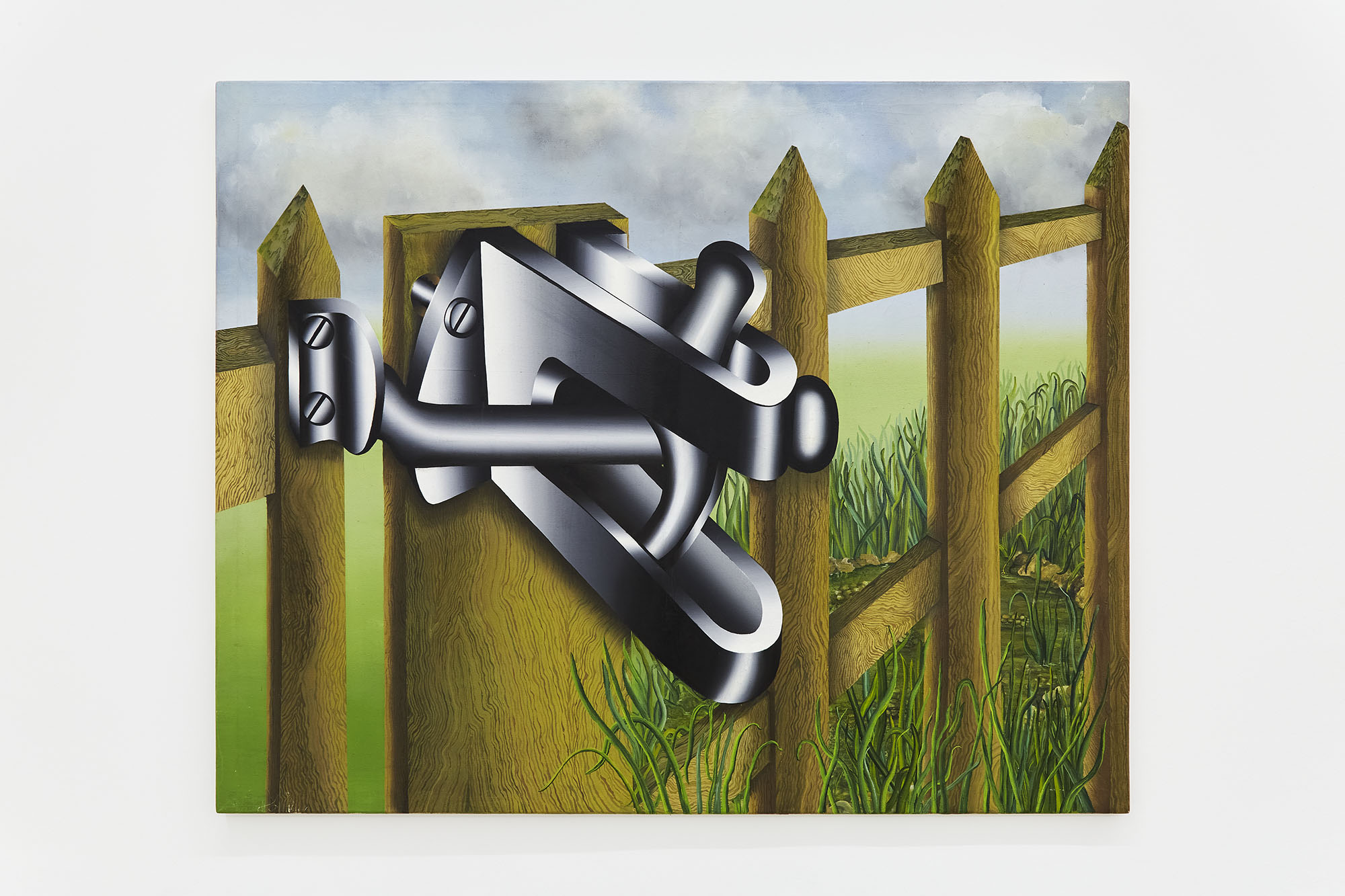 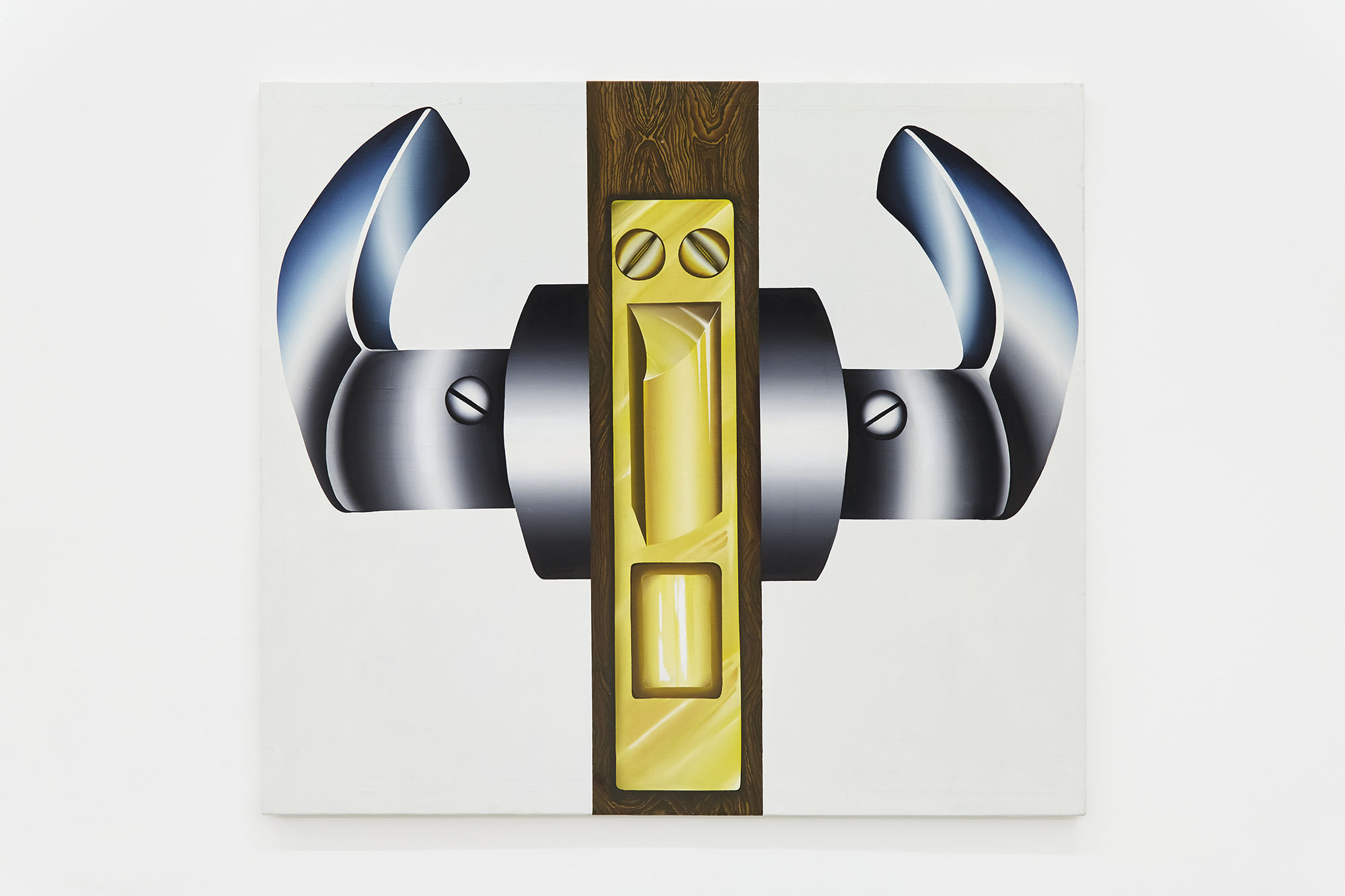 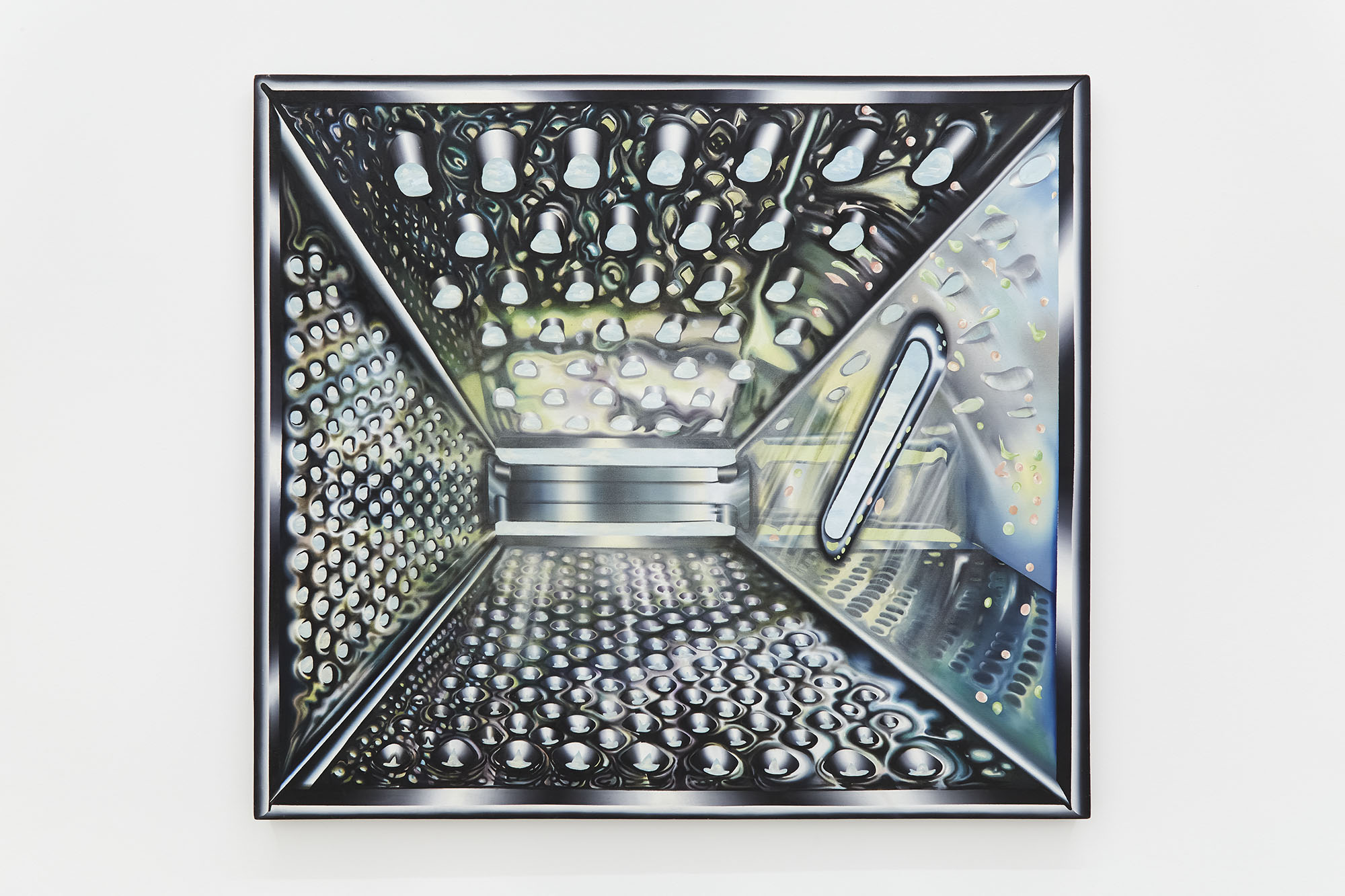 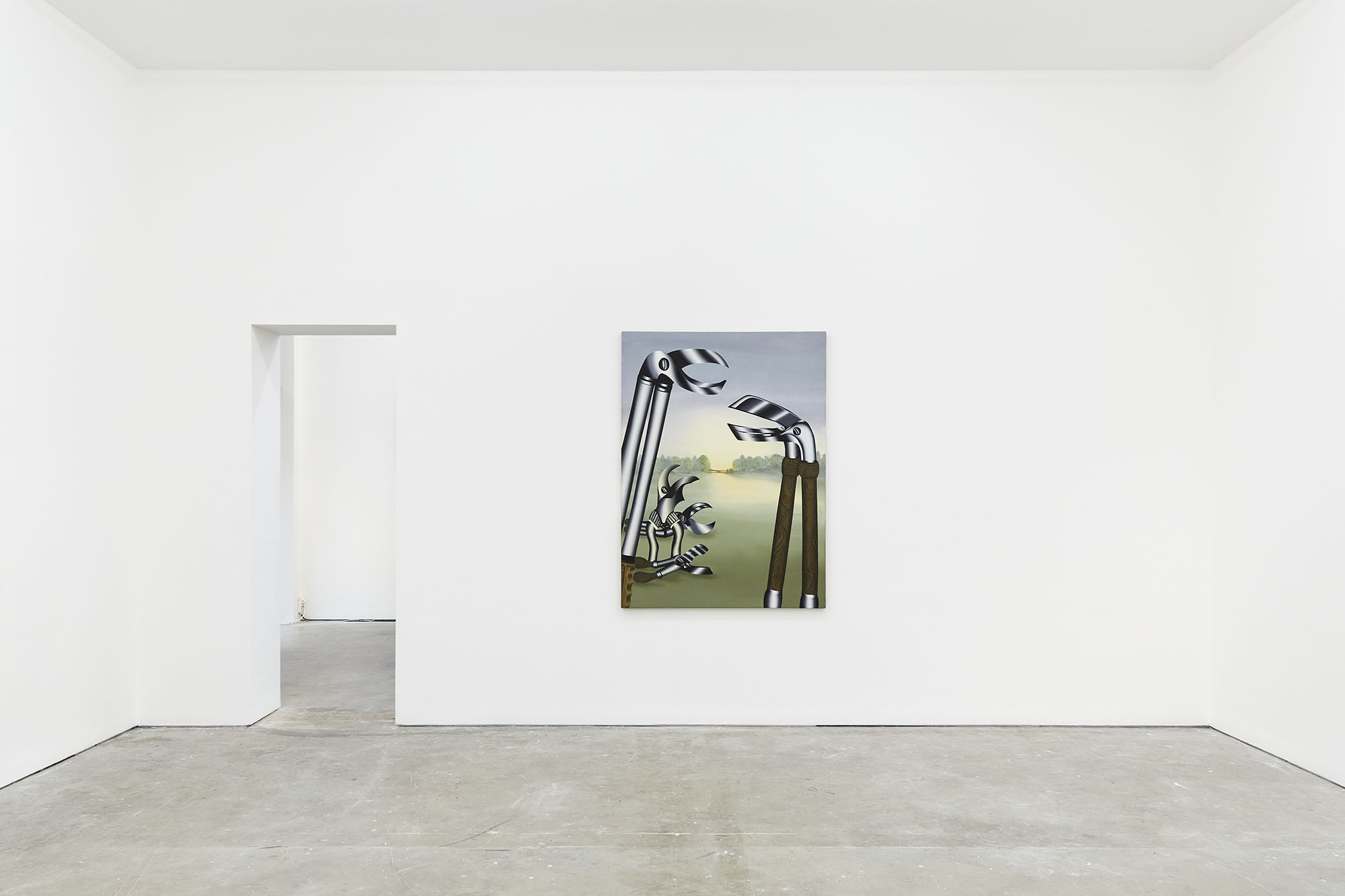 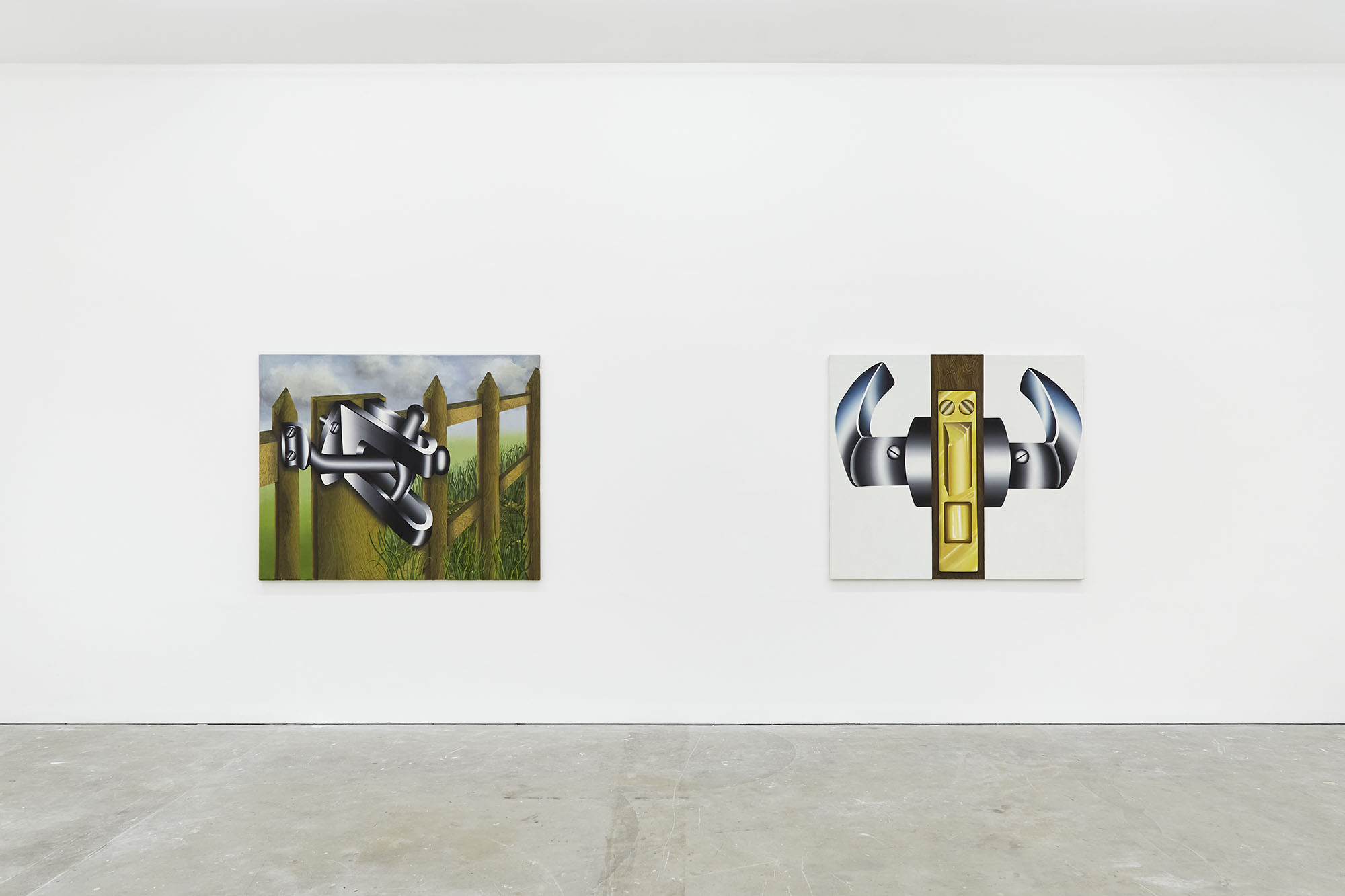 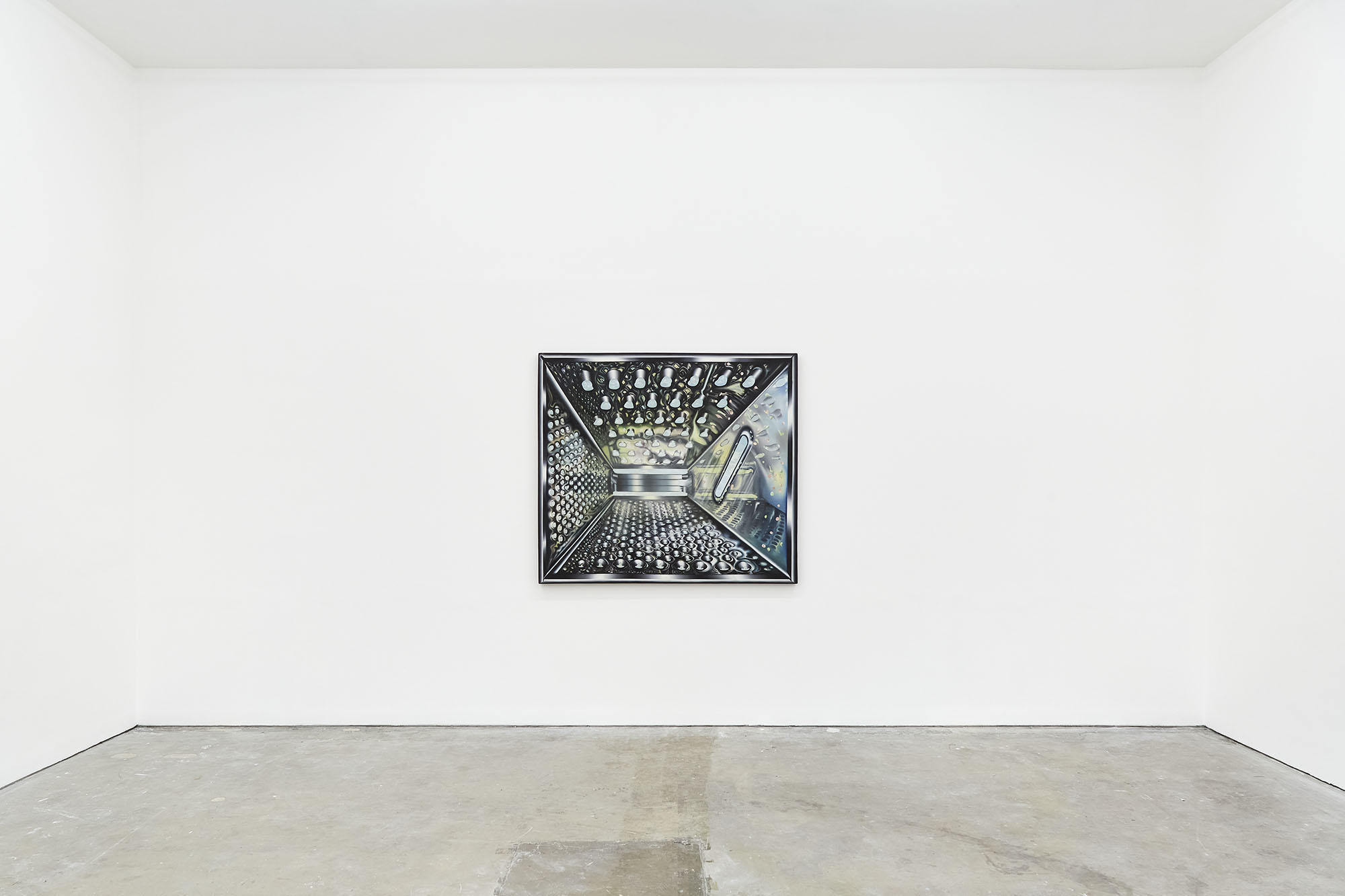 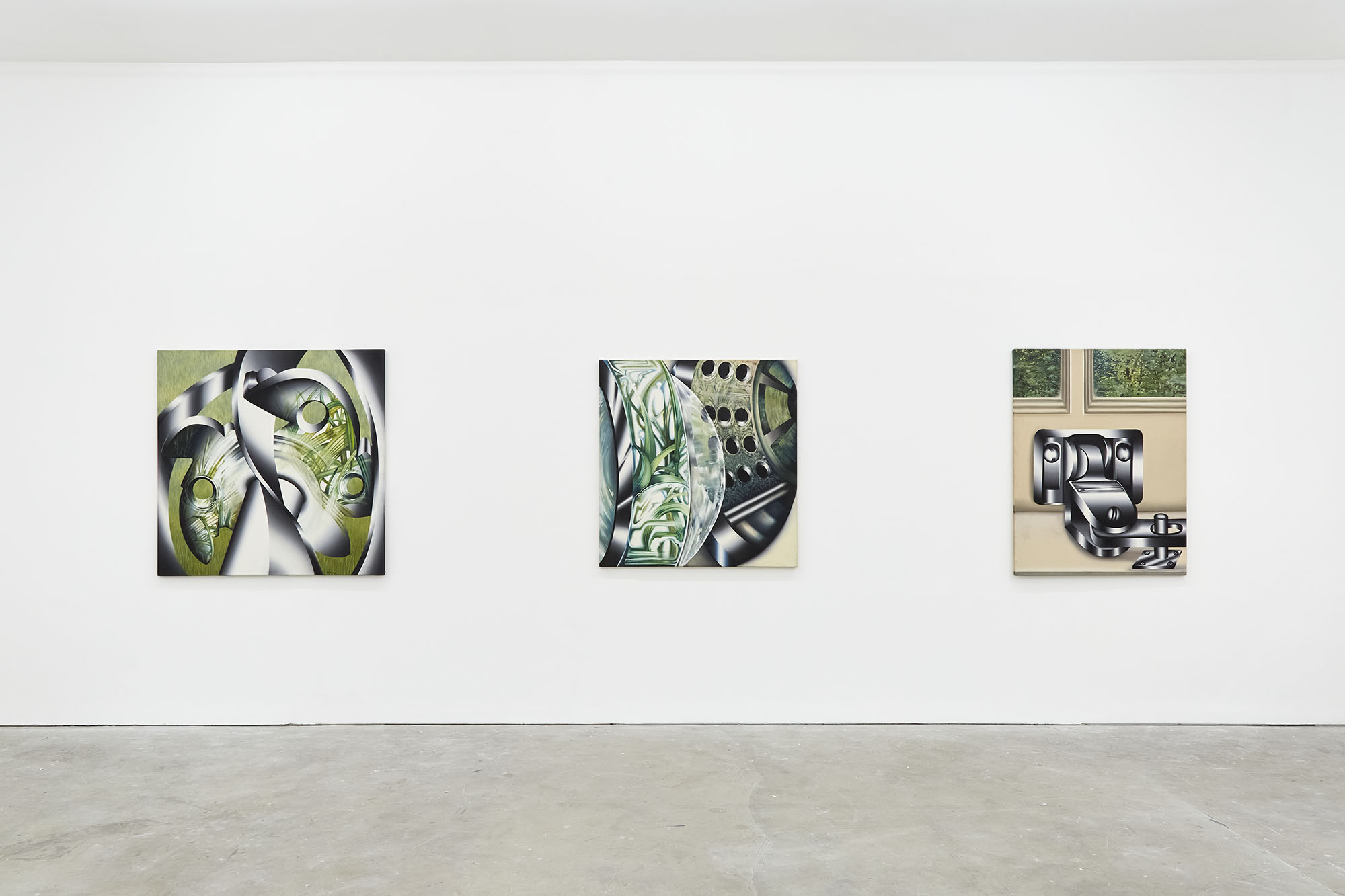 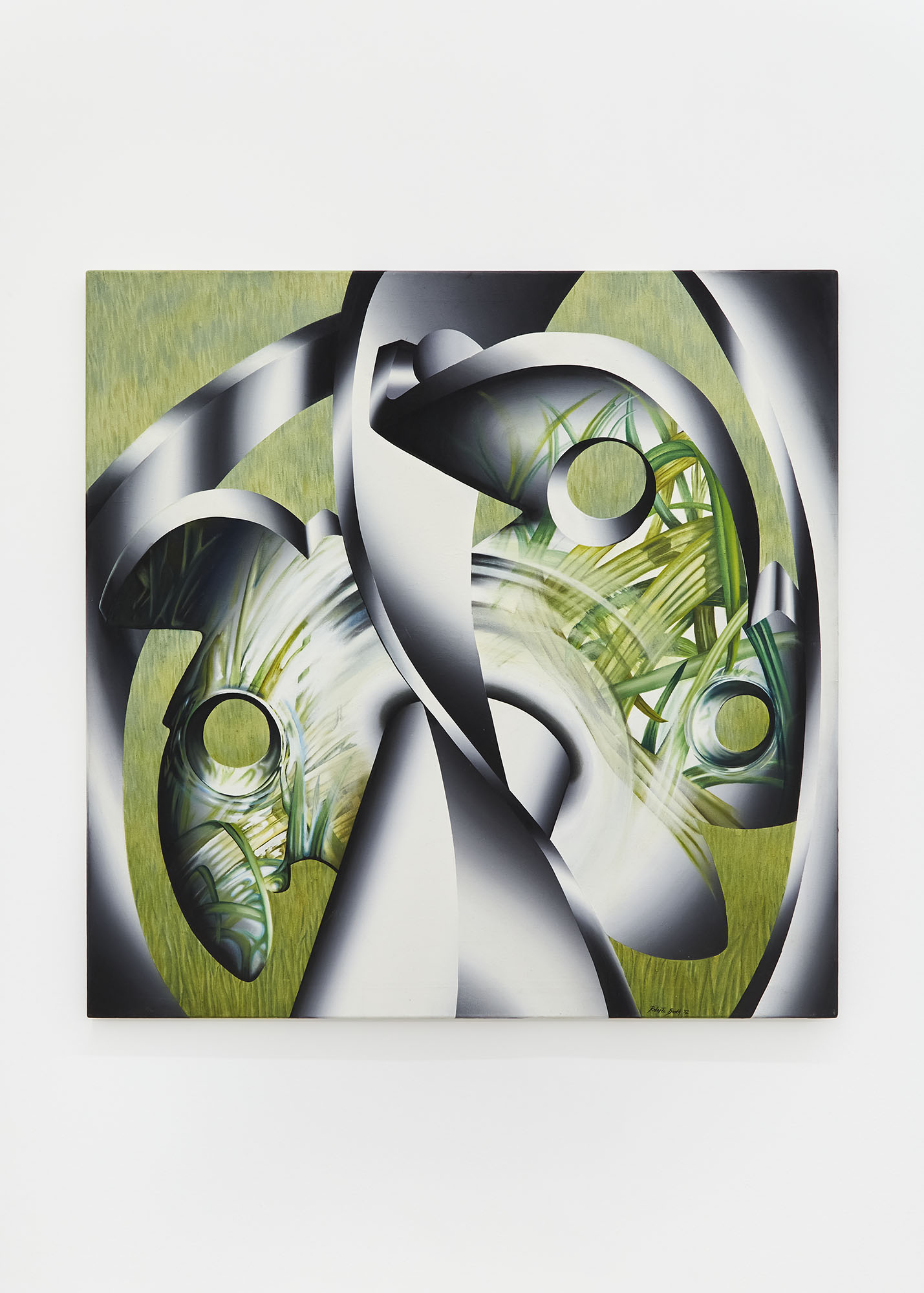 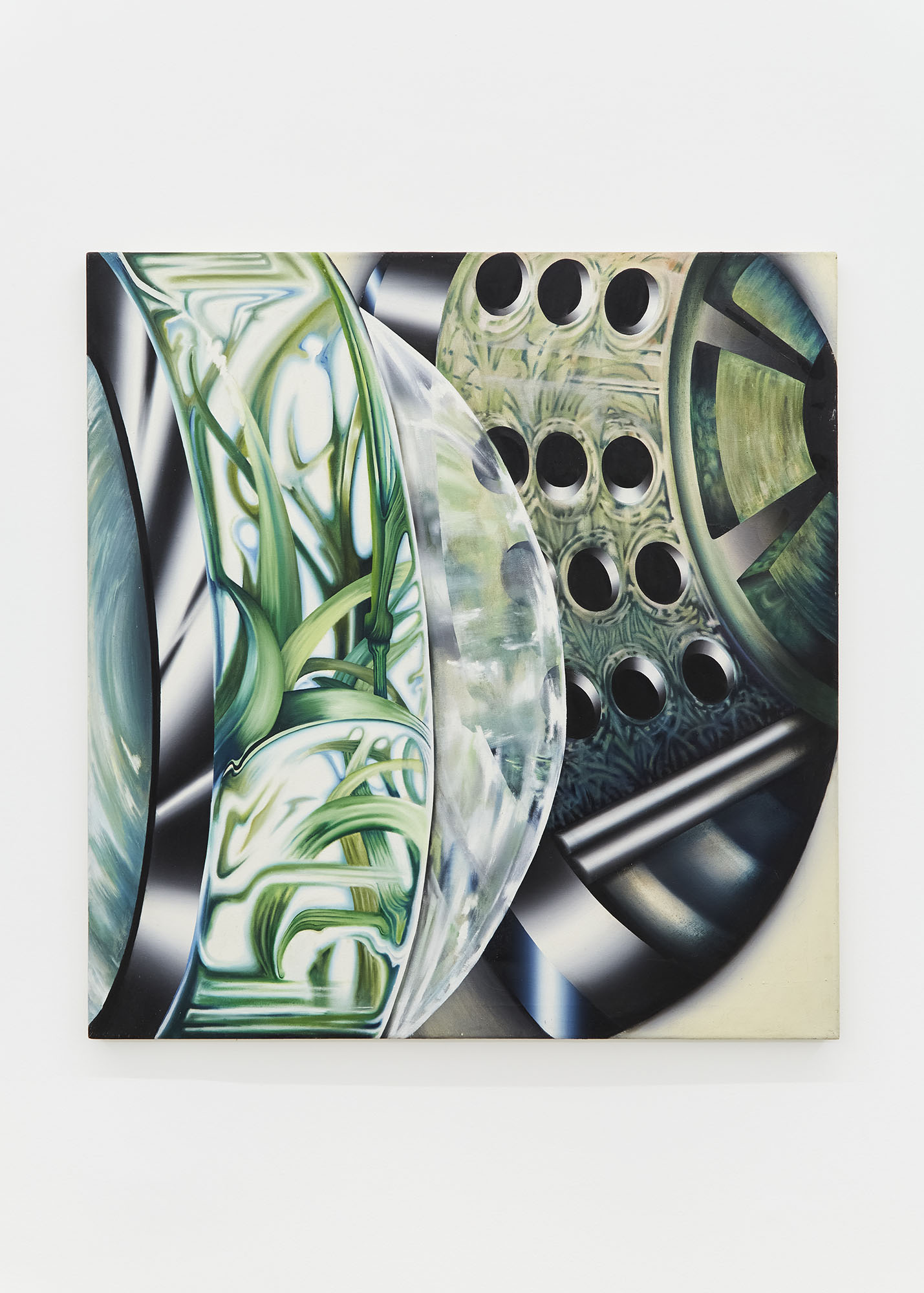 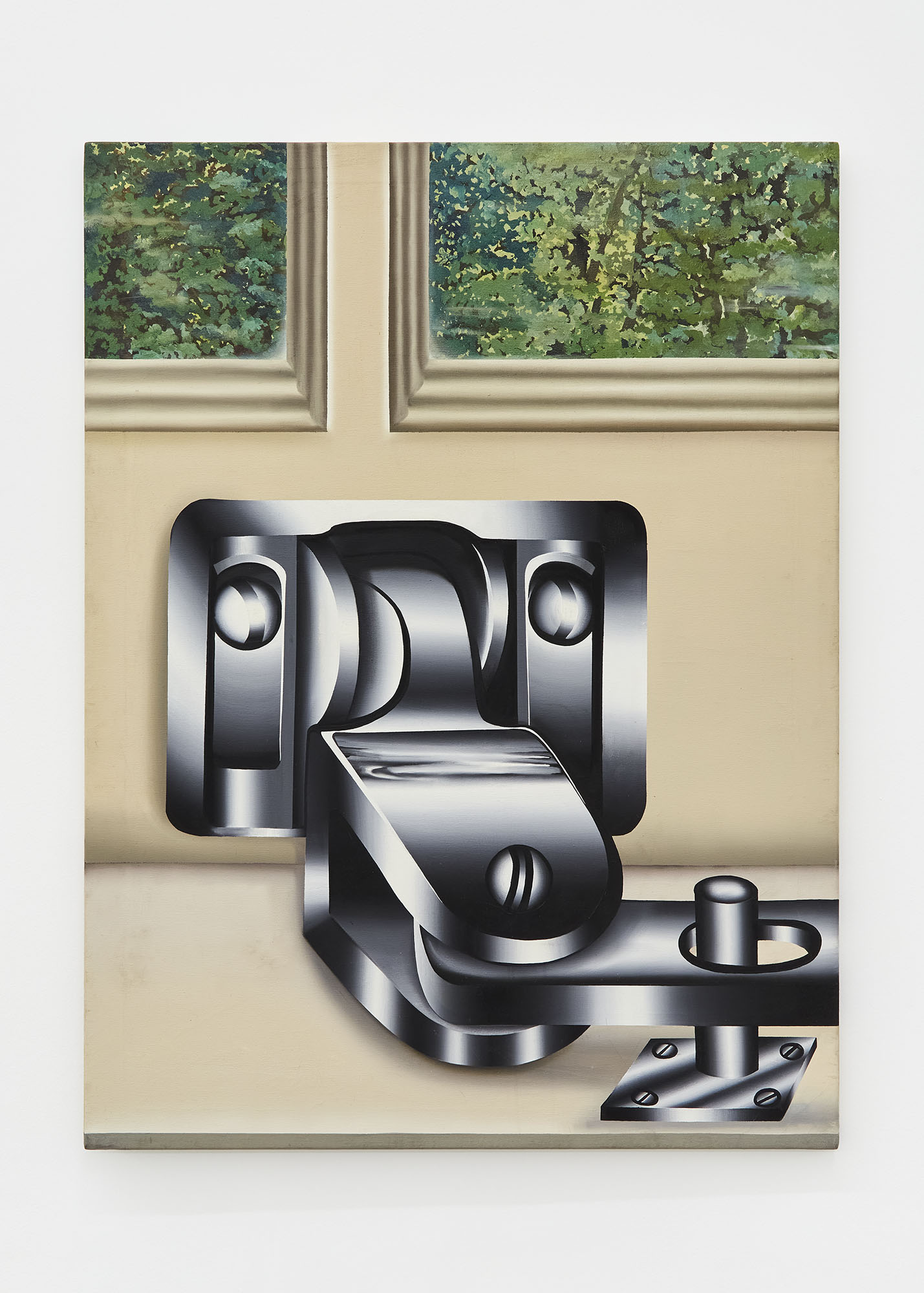 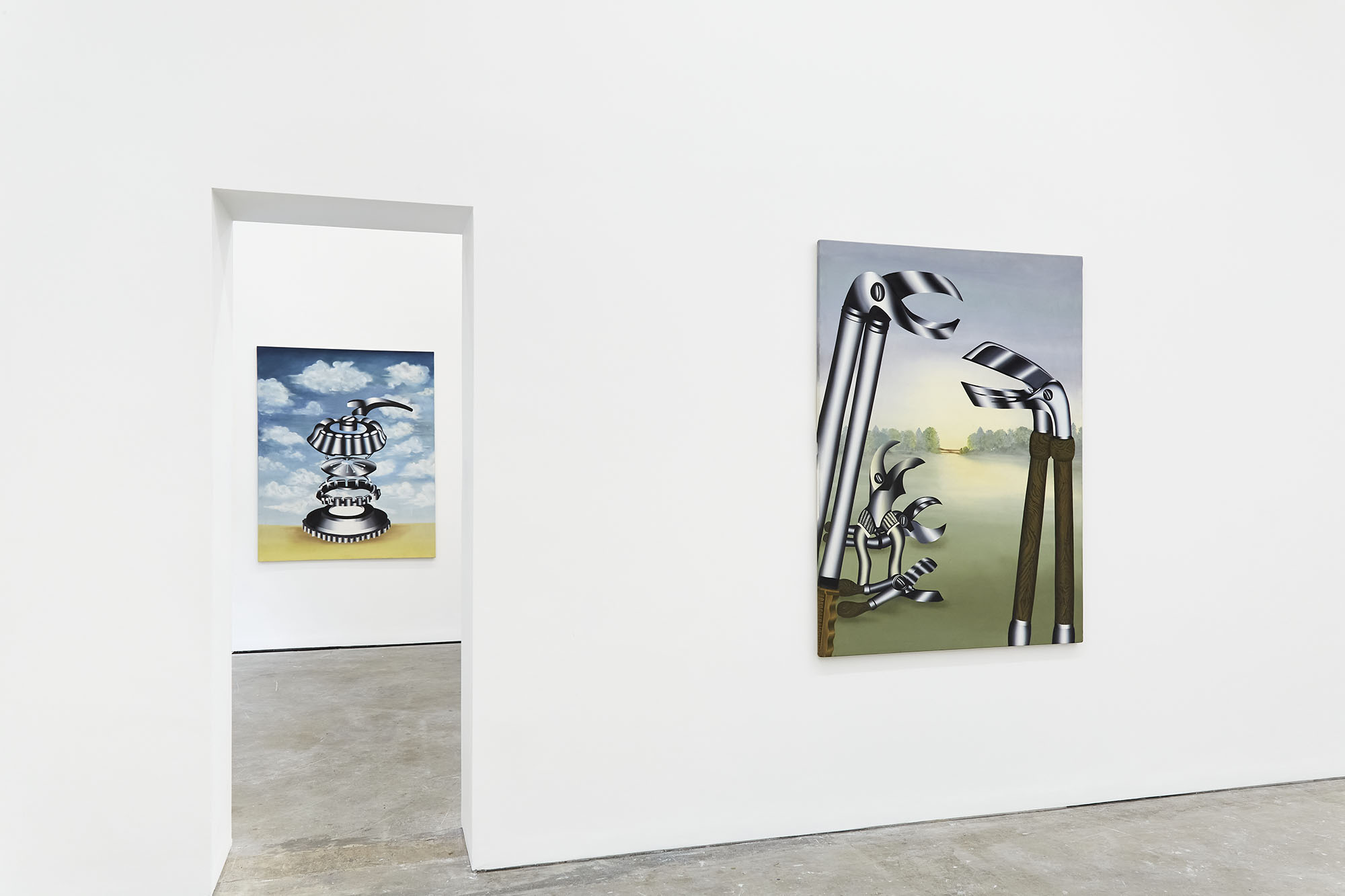 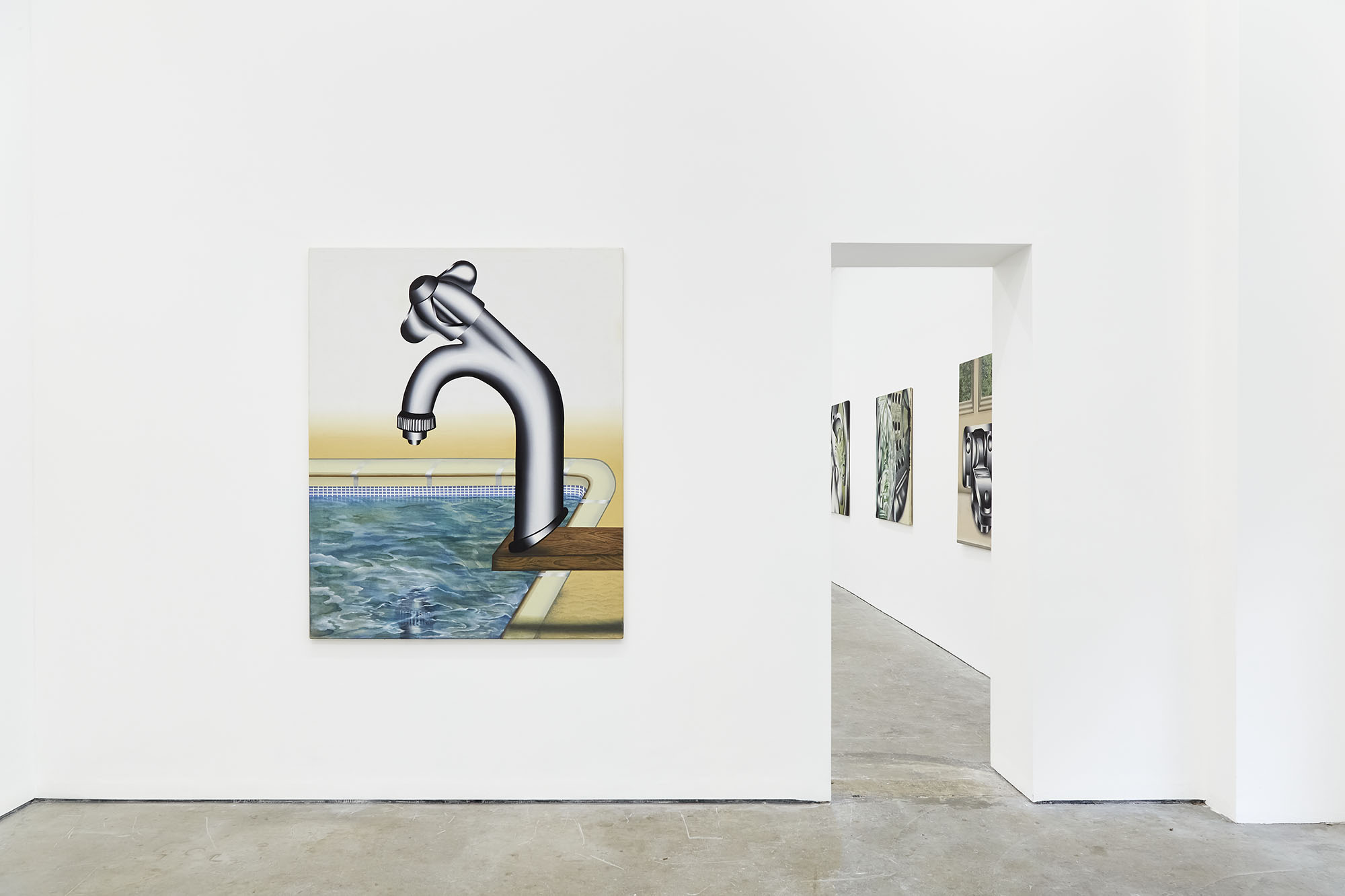 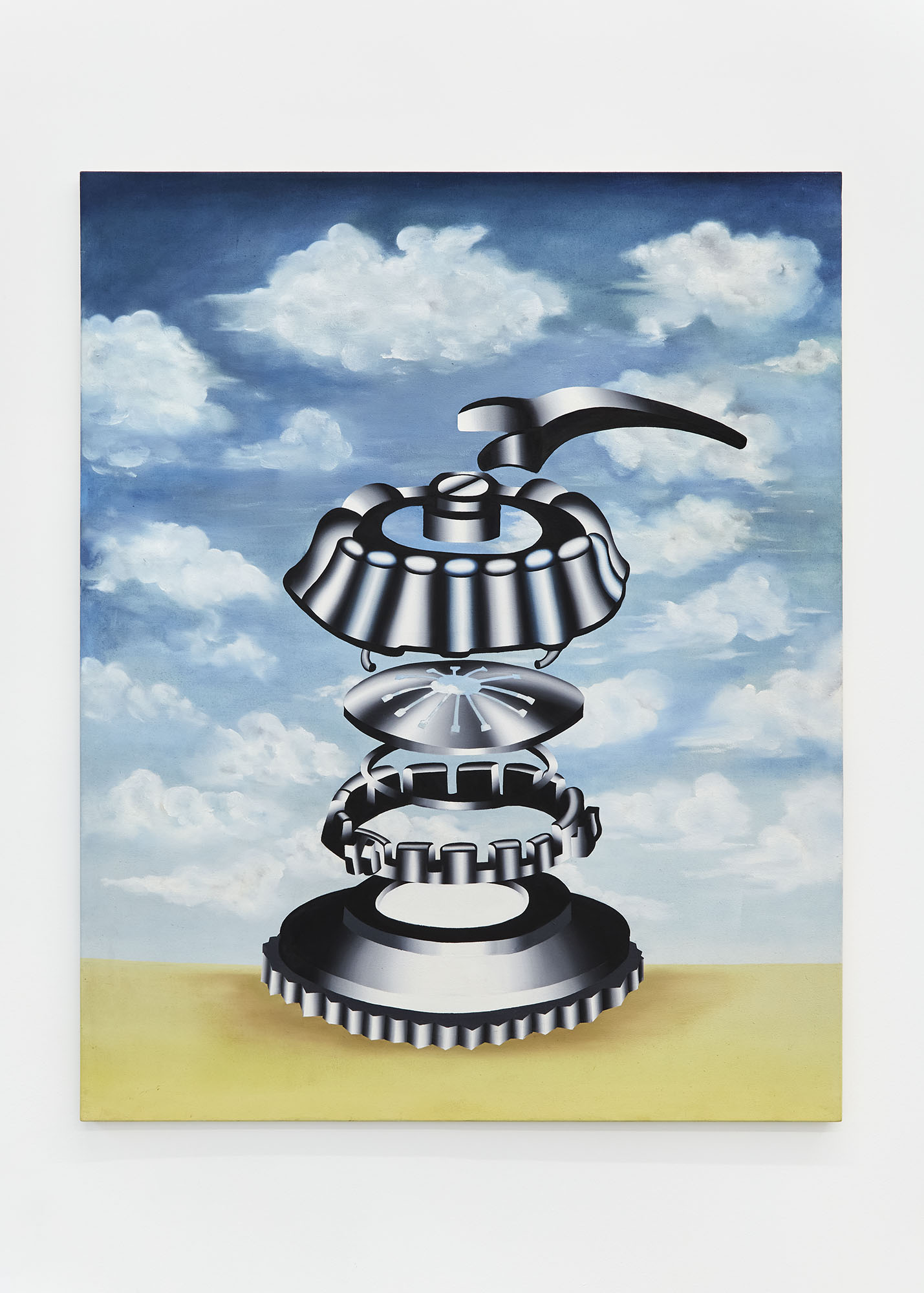 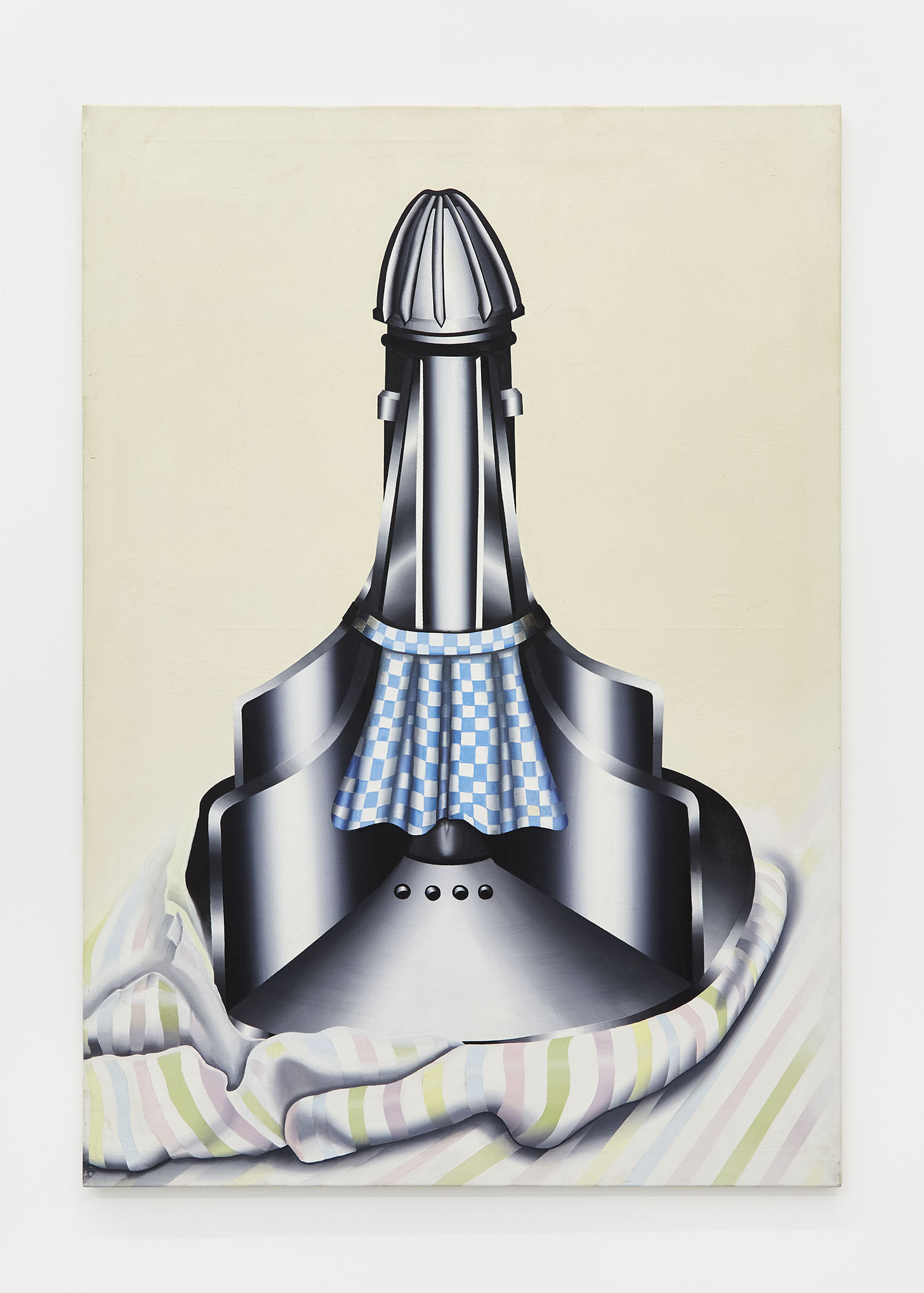 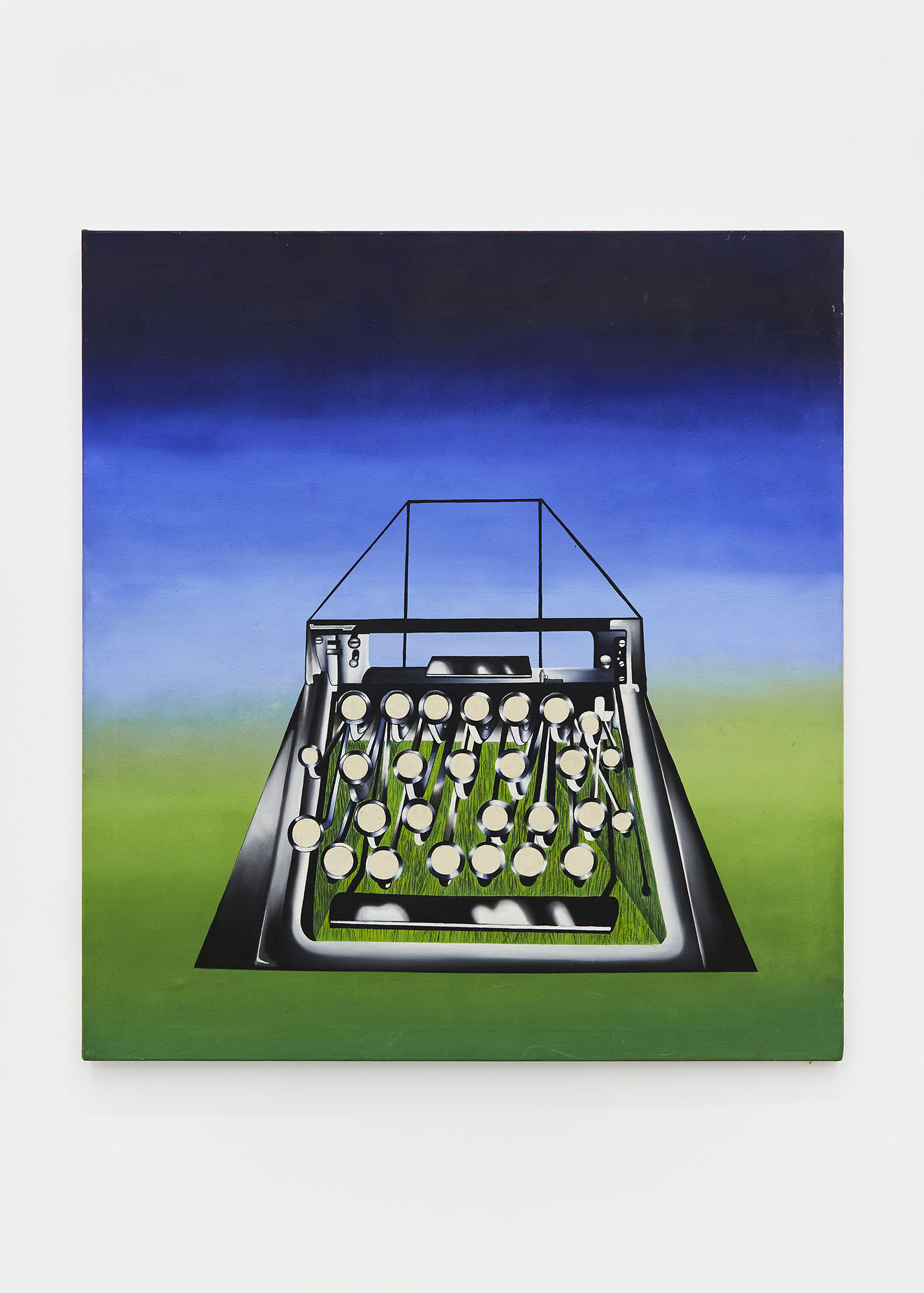 Typewriter
Oil on canvas
122 x 112 cm, 1972
I am standing in front of Oasis, 1976, an oversized tap, which is staring at itself in an opulent and ethereal pool. At first, the clarity of Booth’s painting strikes a contrast between a perfectly machined, reflective and masculine figure; it’s base teetering on the edge of a delicately grained diving board above soft, petal-like waves.

Drawing attention to the techniques of the hyper-real, almost air-brushed forms and the softer painterly marks present in Booth’s work, there is an intentional idiom in the neo-futuristic worlds she was building. Intrigued by such modern motifs combined with what felt like digital computerised precision, each painting from this era has a domineering feel. The figures themselves are constructed of robust material, gears and scale. I am intentionally referring to them as ‘self’ here because it seems as though Roberta’s cogs, bottle openers and taps encapsulate a soul and humanist vulnerability, there is an inherent conflict in the creation of these characters and like us; the agency they embody. On the surface they are intimidating, but on closer inspection you notice an animated fragility. In Oasis, we watch as the tap is about to fall into the pool whilst trying to find itself in the ripples of the water below; an observation of the human condition perhaps.

In works from 1972-1982 we see a comprehensive series of eerie machines, reflective bodies with arrogant postures and surveilling mirrored surfaces against luscious greens, pastel pink and atmospheric blues. I consider the depiction of machines and tools in Roberta’s compositions and note soft reflections of the often botanical environment these exist in; but with an unnerving potential for the reflection of the onlooker in the metallic facets of locks, graters and utensils. Booth was keen on referencing the dawn of technology, how it reduces human burdens and displaces banal chores to another ‘existence’. However, the machine was becoming the slave, reflective of its master. In time, Booth believed the machine would rise and itself become the master but what then becomes the slave? Booth was not just telling us something, she was warning us.

There is the not so subtle suggestion here that we create or conceive objects within our likeness, as a form of understanding ourselves. These ideas are born of our experiences in a physical and temporal world, yet Booth wanted us to look beyond corporal encounters. The anthropomorphic forms of Booth’s hardware directly speak to the intimacy between man and its creations. The nature in which we treat machines, the industrial fruits of our creation and how this becomes an exercise in exploitation and depreciation.

In modern technology, we strive to create a labour force which disappears from view, one that becomes autonomous, banal and doesn’t deserve our attention. Yet more and more, we see the depiction of reality embedded in technology, be it through the familiar sound of Alexa or the human likeness of AI-DA, the world’s first AI artist. These animated skins that we wrap technology in are now increasingly familiar and provide us with a sense of kinship or parenthood.

It was on my second visit to see Roberta’s work that I was offered the chance to understand her concepts more, through sketchbooks, notes and clippings. I had already started to think about how Roberta might be influenced by Jung or Koestler and was decoding the messages woven throughout her sketches and unequivocal painting language.

Booth’s reference often pointed to the notion of the metaphysical, a place in which the reflection of ourselves can be cyclical and endless throughout life. If there is a mirrored surface, we will always be forced to see ourselves within it. One theme in particular was ruminating inside me, this merging of the masculine and feminine within Roberta’s code, represented in her brush strokes and clean lines. In the 1920s Jung wrote about the anima and animus, the theory that describes the inner feminine traits of men and the inner masculine traits of women. Originally, these terms were used to describe the complimenting traits of a vital life force or spirit in ‘anima’, or rationality, courage and desire in ‘animus’. These values course throughout Booth’s paintings, showing the violence of machinery intersecting the elegance and frailty of nature, it speaks to a spectrum of qualities embodied in every human. Marie-Louise von Franz ​​warned that:

‍"the anima and animus have dual aspects: They can bring life-giving development and creativeness to the personality, or they can cause petrification and physical death".

‍Booth’s obsession with the rise of the machine, was of the same warning. What we create or teach machines, if not ideal or paragon, can bring pain, violence and trauma. A detailed sketch of a discarded wet umbrella, it’s handle poking out above the ‘knees’ and ‘skirt’ of the folded mechanism, sees the words “Anima / Animus” scribbled above it in one sketchbook. Roberta had written notes on the expectations of being a woman in the 1970s, whereby many felt  burdened with the realities of home-making and mothering. There was a new language in her work of this time, Roberta, an accomplished academic, was asking us to see the ‘woman’ in the ‘machine’, asking us to recognise this man-made object as ‘worn out’.

In 2021 the movement to accepting non-binary gender expressions means that Jung’s theory becomes a simplistic and binary description of the ‘persona’, which no longer fits modern societal exposition. However Booth’s future-facing work and ideas somehow reinforced the idea of the spectrum in life and the notion that we cannot exist as just one binary value; her depictions and messages are of plurality; against the frictions of an objective singularity.

These sketches and notes took my mind to my favourite of Booth’s paintings, The Little Woman, 1976. Showcasing the collision of man, machine and woman more boldly, The Little Woman shows us a towering great phallic figure, that sits among soft, pastel linen and wears an apron. The metallic surface is void of colour, providing a desaturated centrepiece to a soft, candy-coloured sheet. This intimidating statuesque form takes on a brief moment of femininity and reinforces the hidden strengths behind domestic roles, again blurring the lines between gender, species and object. These intersections often incorporate the natural world which Roberta often painted into her works as the backdrop to technological subjects. This natural world is positioned where the viewer observes the art work, the reflection of nature and bloom is omnipresent in both Booth’s work and our everyday lives, presented to us on reflective surfaces all around. It is a window to a plush landscape, which actually already exists. There is a hidden beauty and strength in everything if you look hard enough and this was Roberta’s core message. Booth wanted us to return to beauty to uncover the strength within ourselves for if we do not, man merely exists to be a machine.


“Beauty is eternity gazing at itself in a mirror, but you are eternity and you are the mirror.”
‍Kahlil Gibran | The Prophet | 1923


Text by Ema O'Donovan
Curator and Director
‍
‍
Roberta Booth was born in Derby in 1947, graduating the Royal College of Art in 1972. She died in 2014.
‍
A prolific painter and academic, Roberta Booth exhibited widely across the UK and internationally throughout her long career

Her work has been critically acclaimed both nationally and internationally and was represented by Duncan Campbell Fine Art in Kensington, London for 15 years. Her work is held in the public collections of the Victoria and Albert Museum, London; the University of California, USA; Waikato University, New Zealand; Oxford University, Cambridge Universities including Anglia Ruskin, and The Institute of Astronomy, Northampton Museum, Herbert Museum, Coventry; Kettles Yard, Cambridge and The Royal College of Art:, London; and subsequently the National Collection. She also has work in the largest collection of woman’s art in Britain at New Hall, Cambridge.