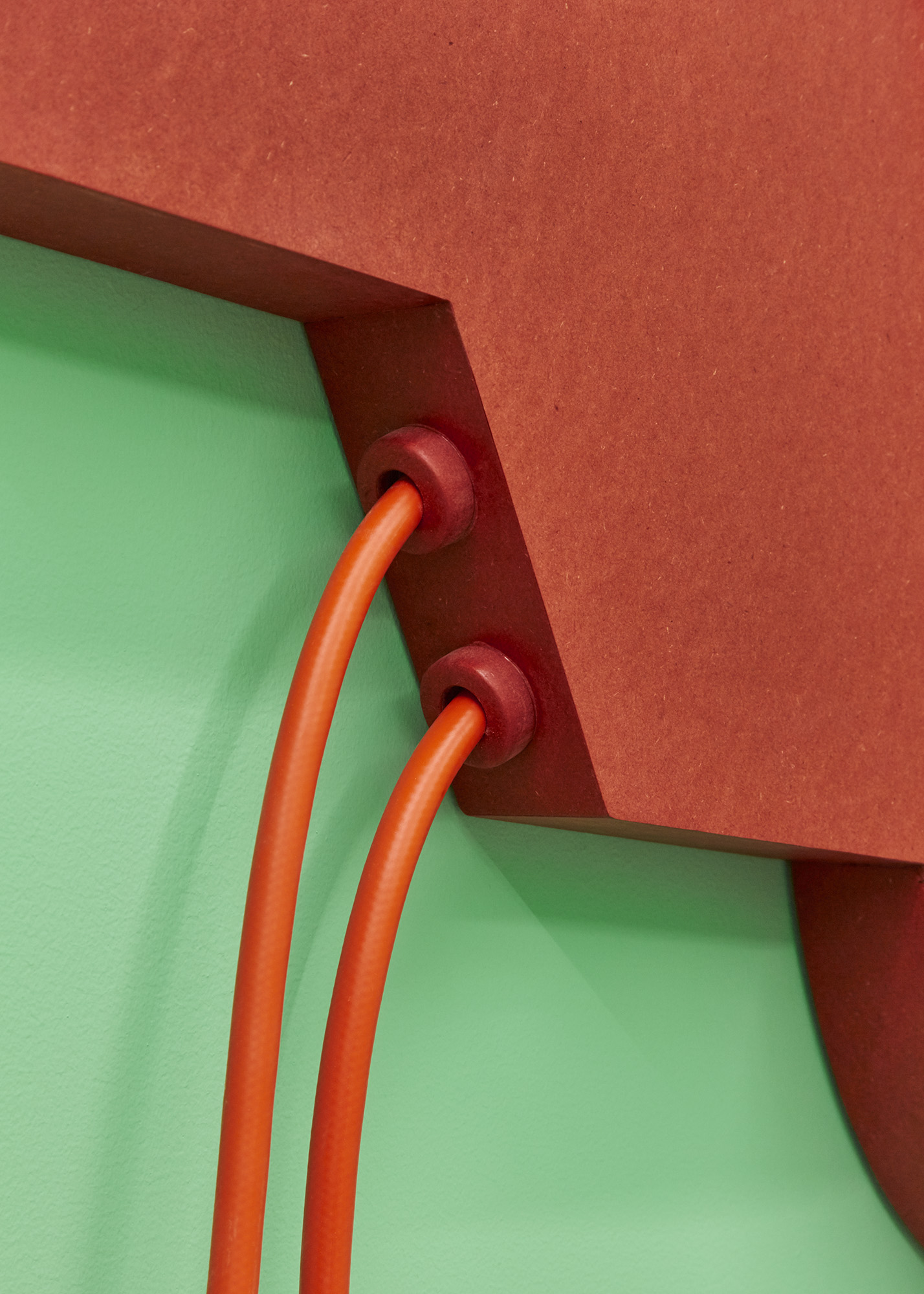 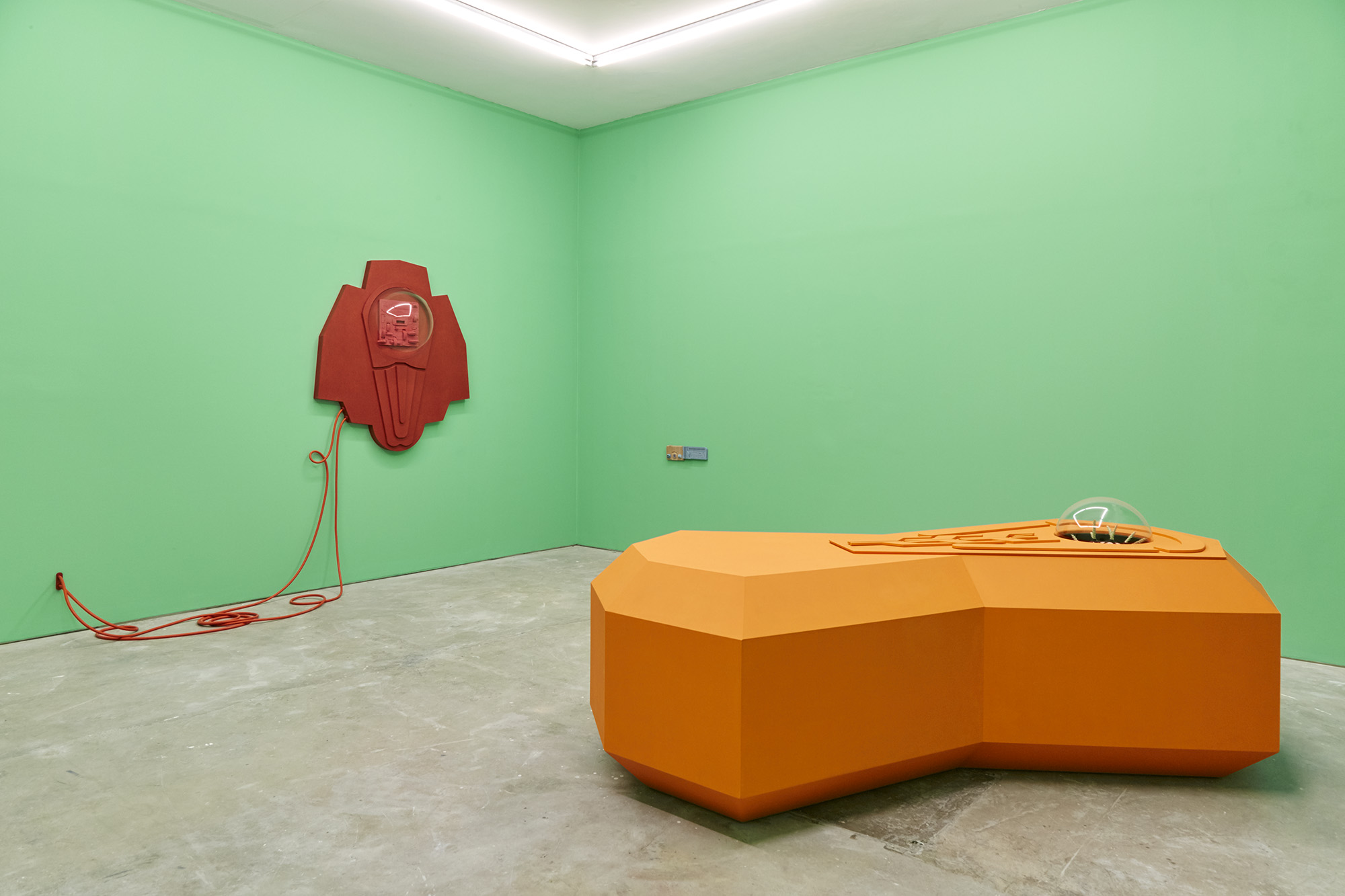 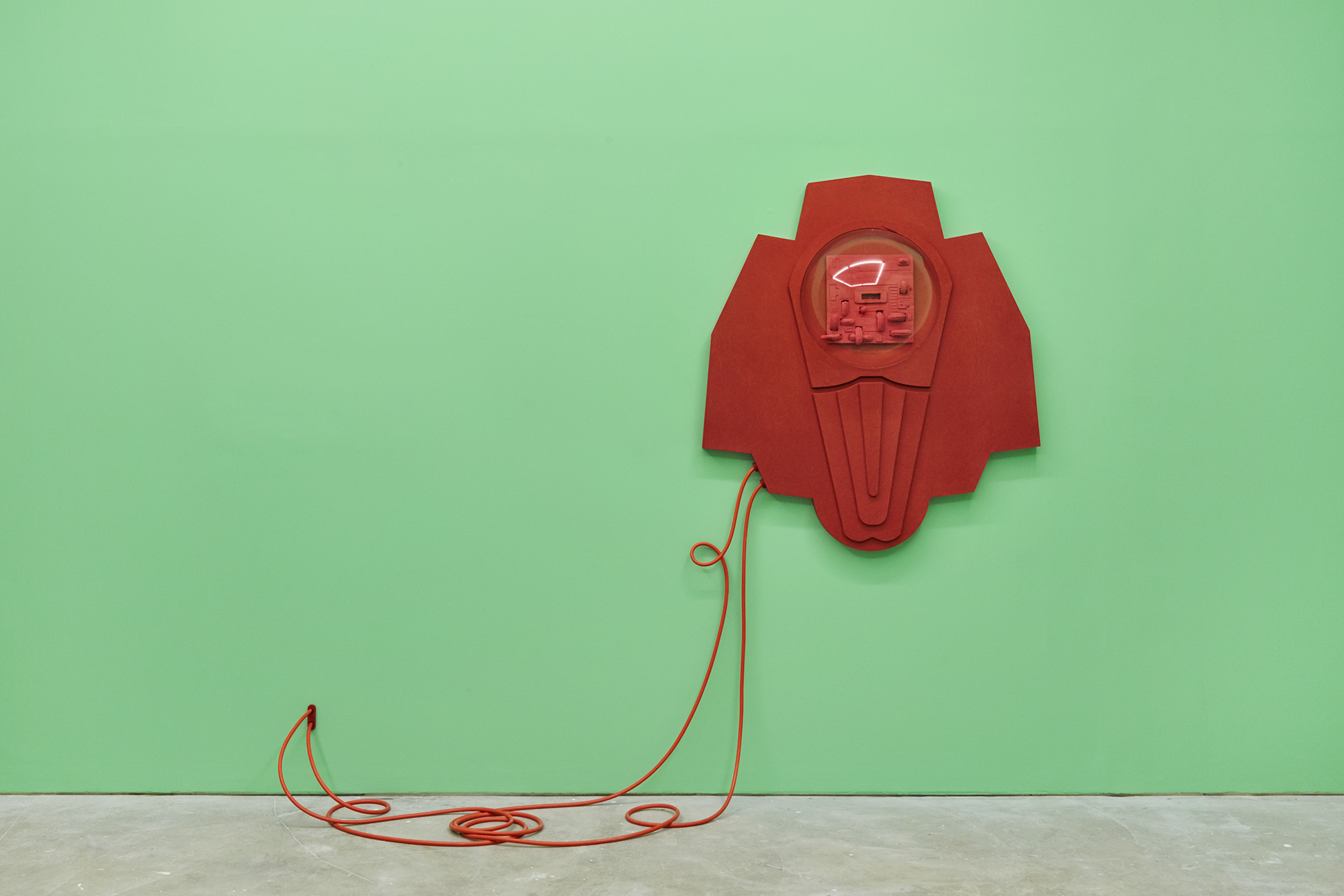 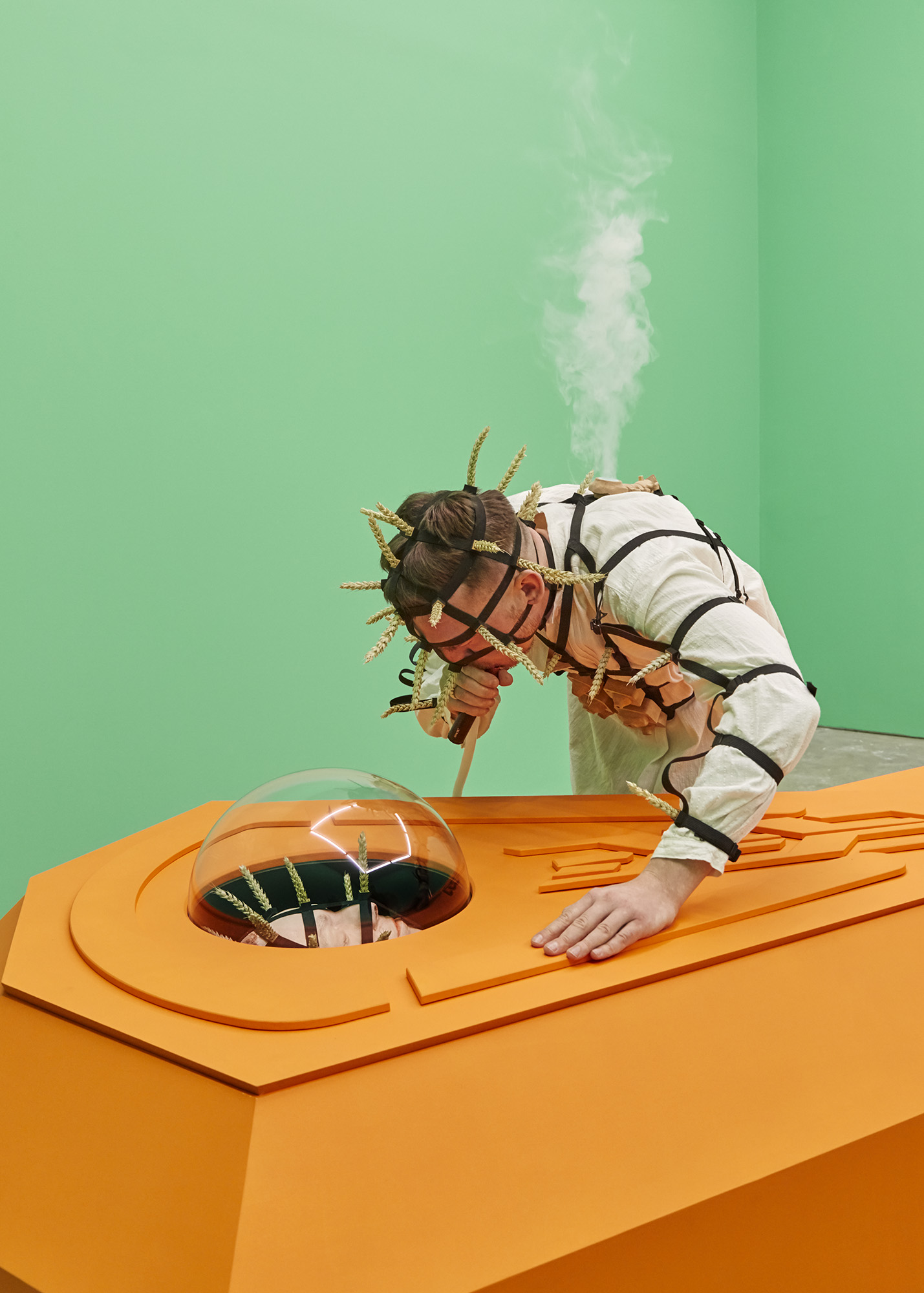 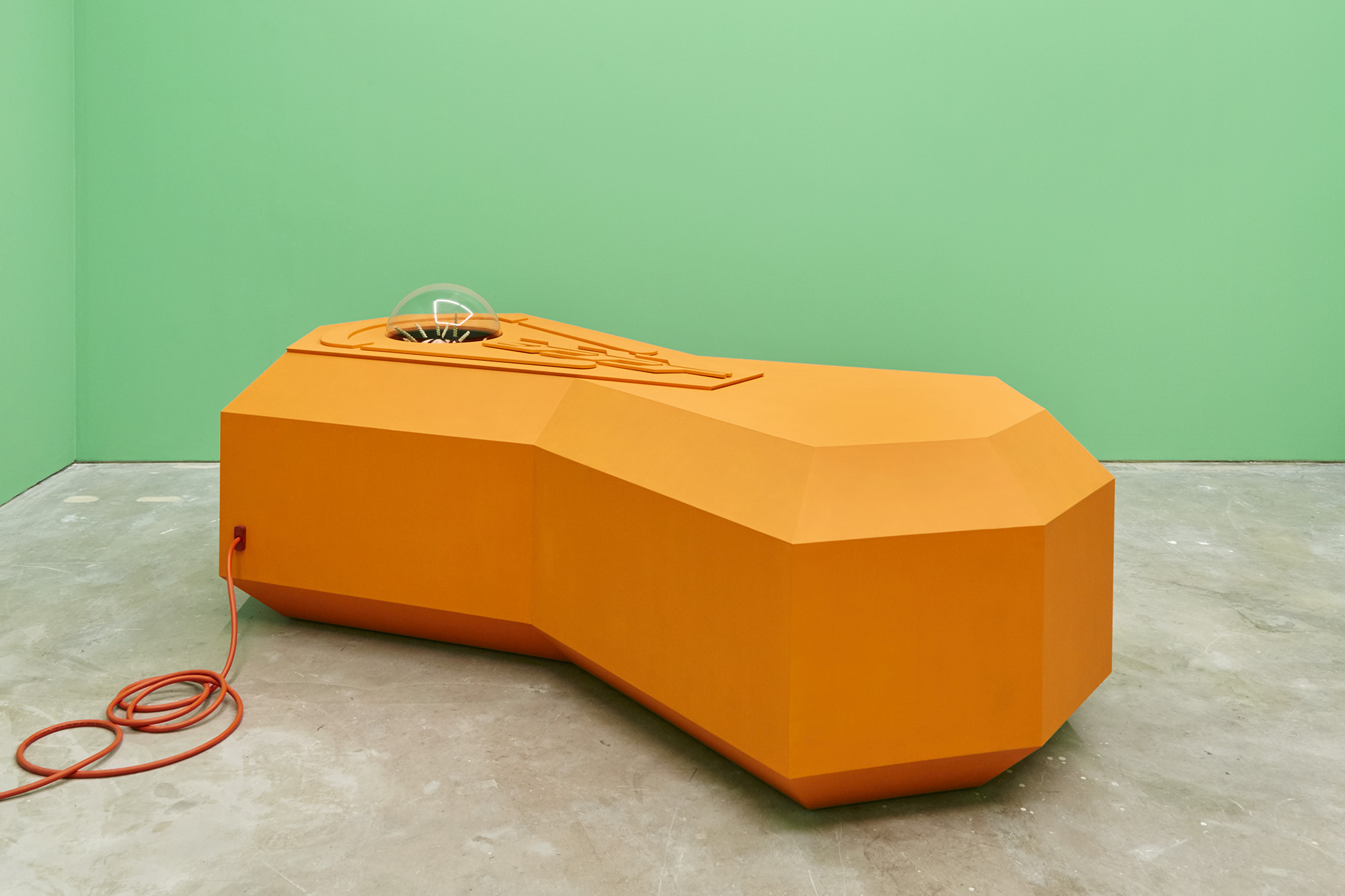 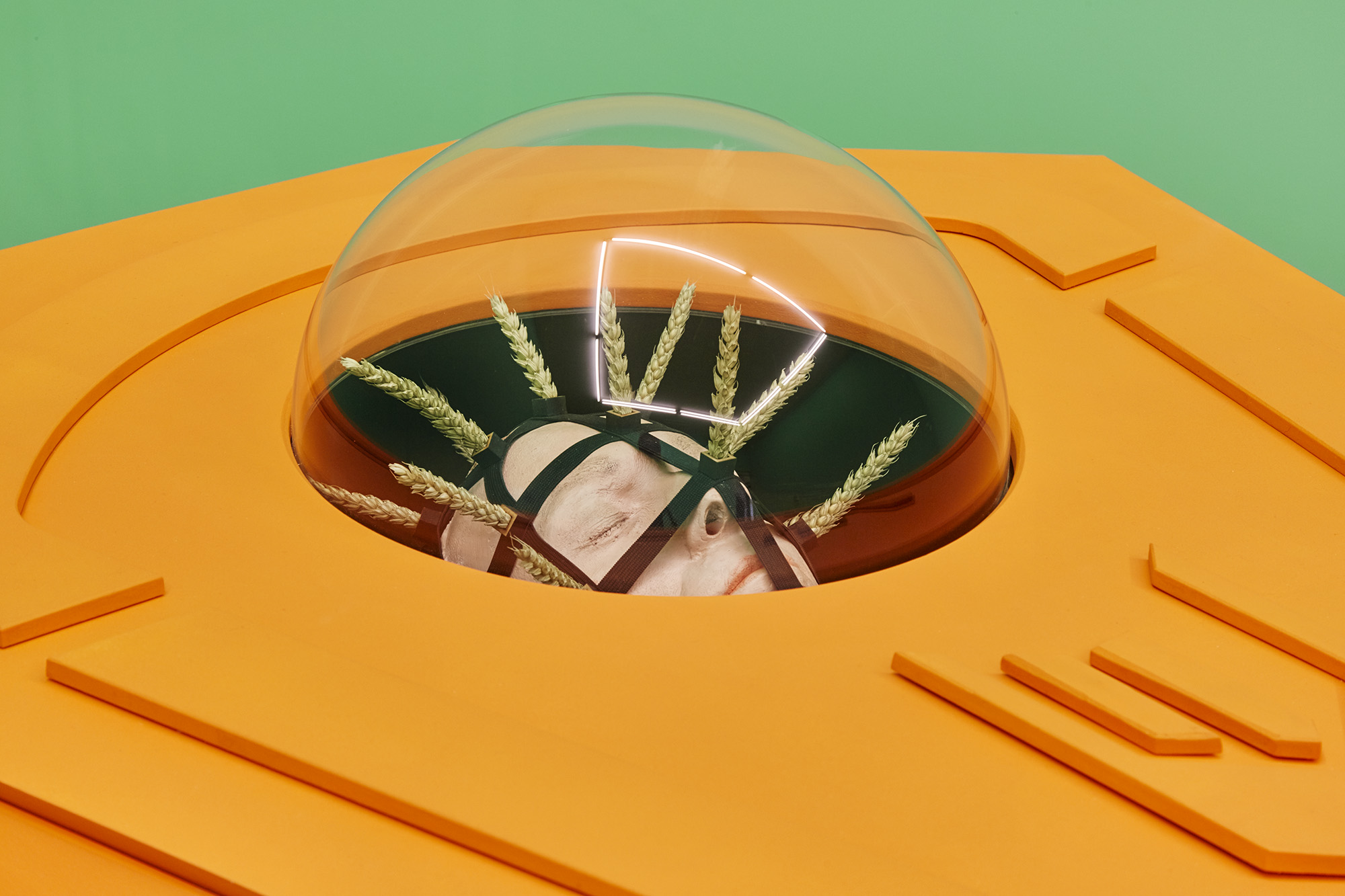 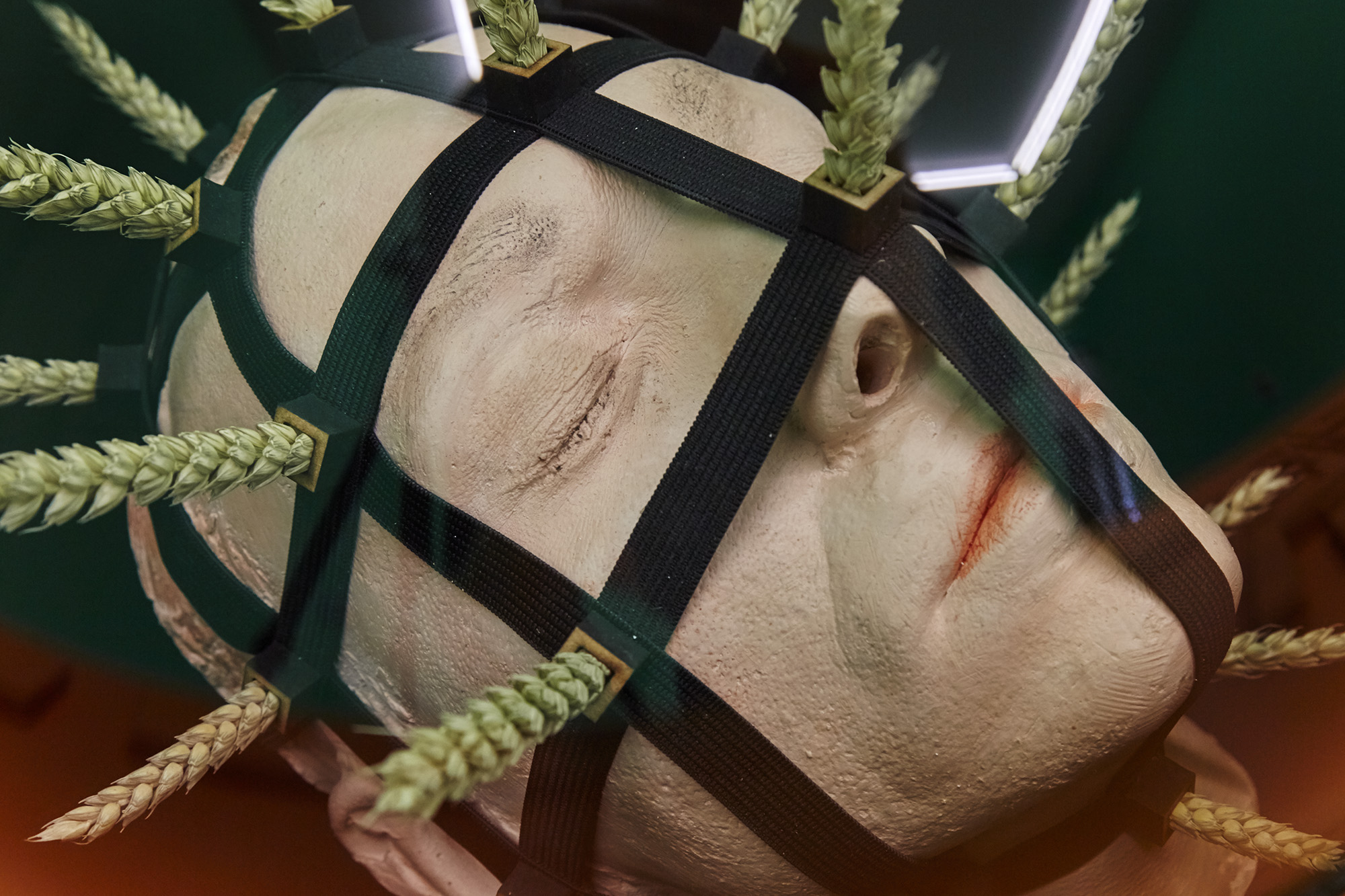 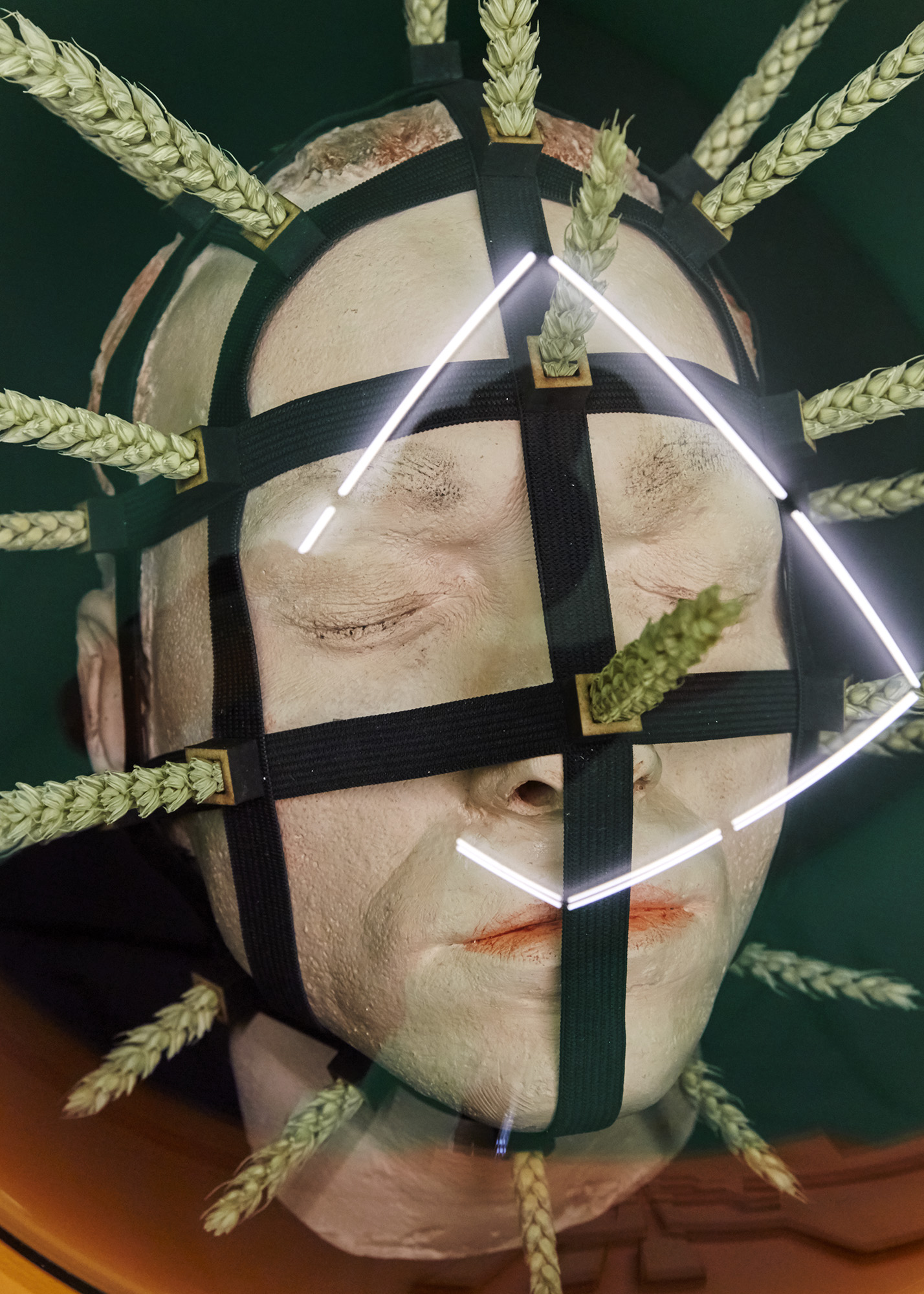 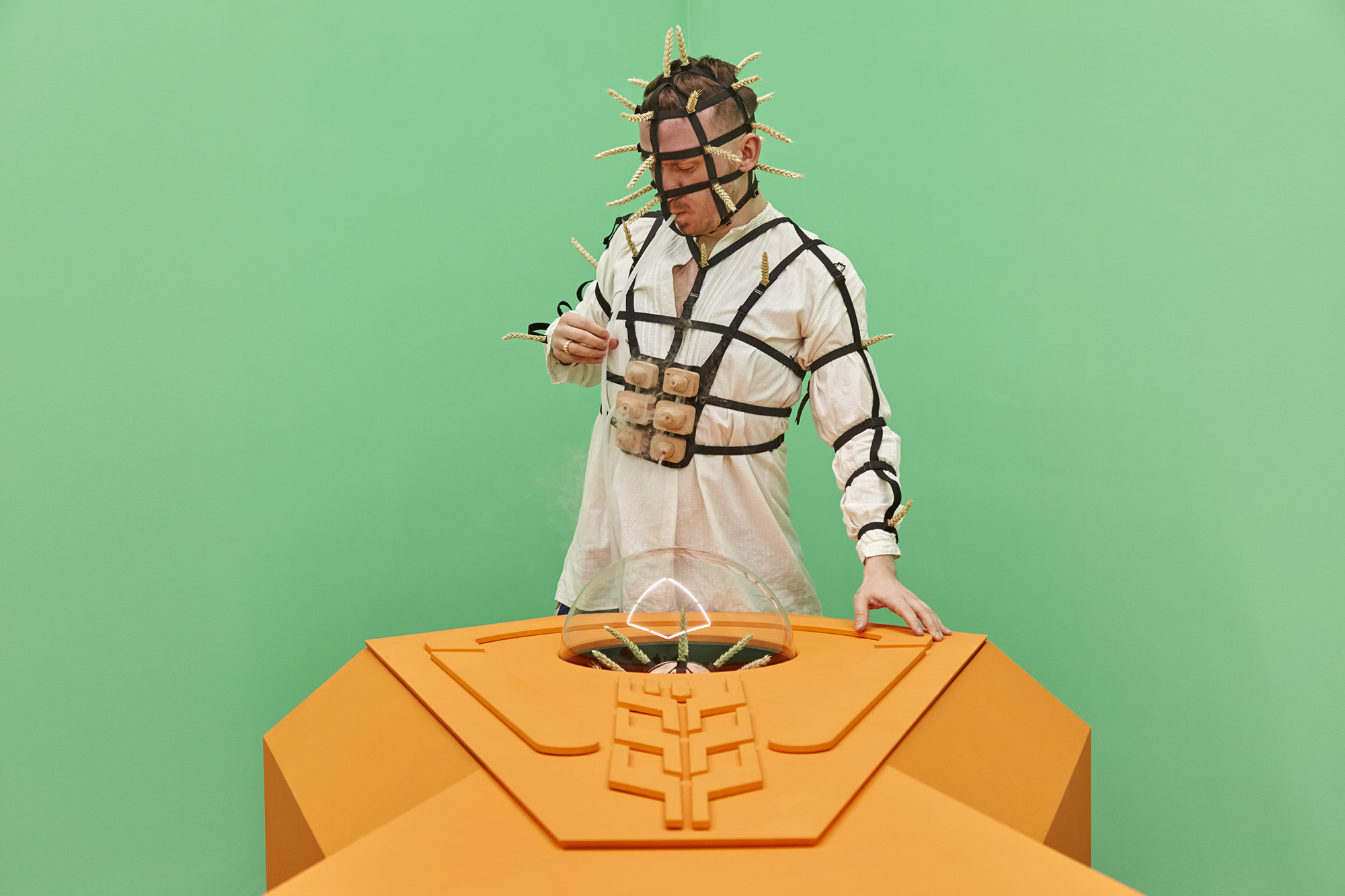 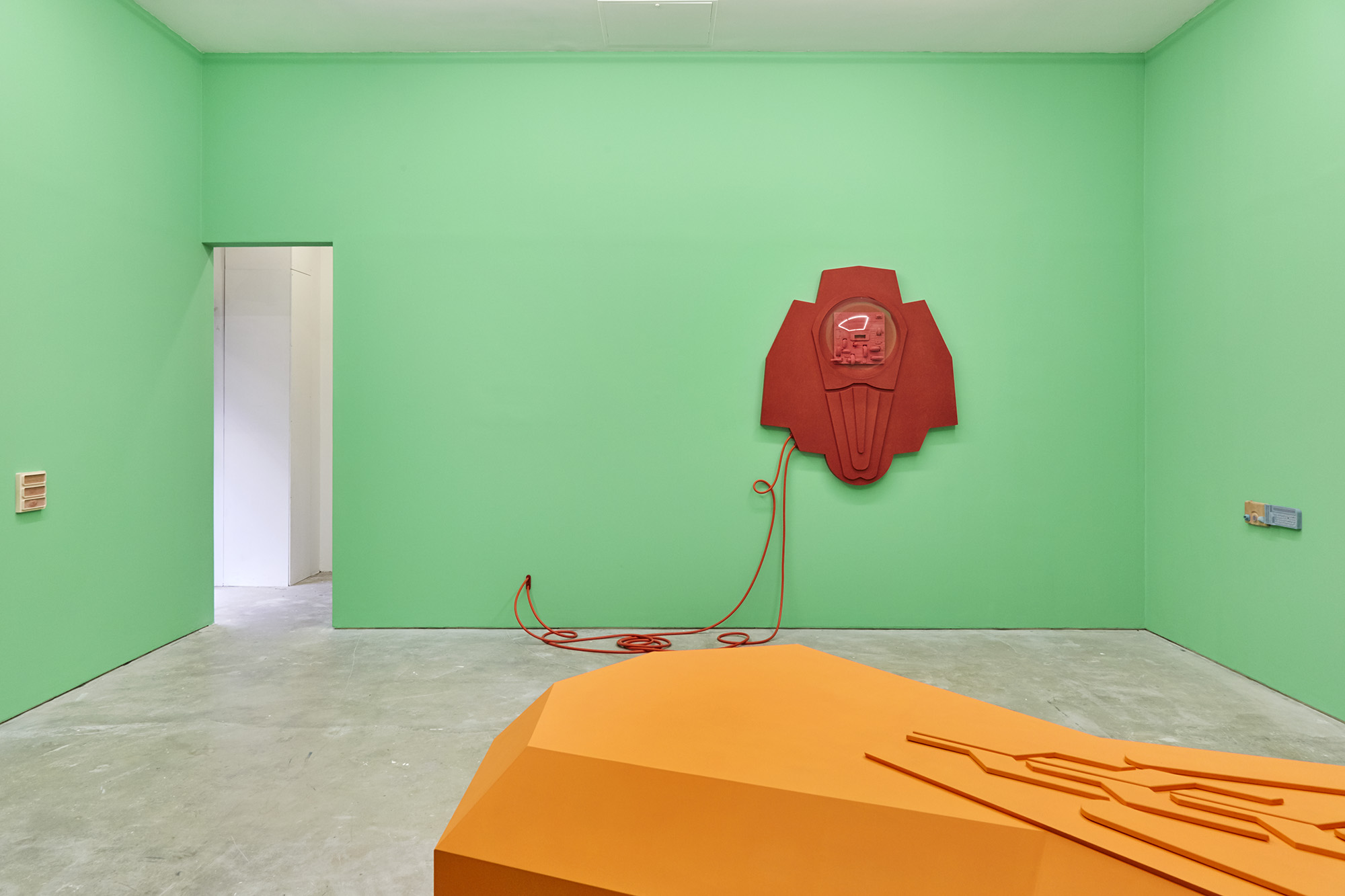 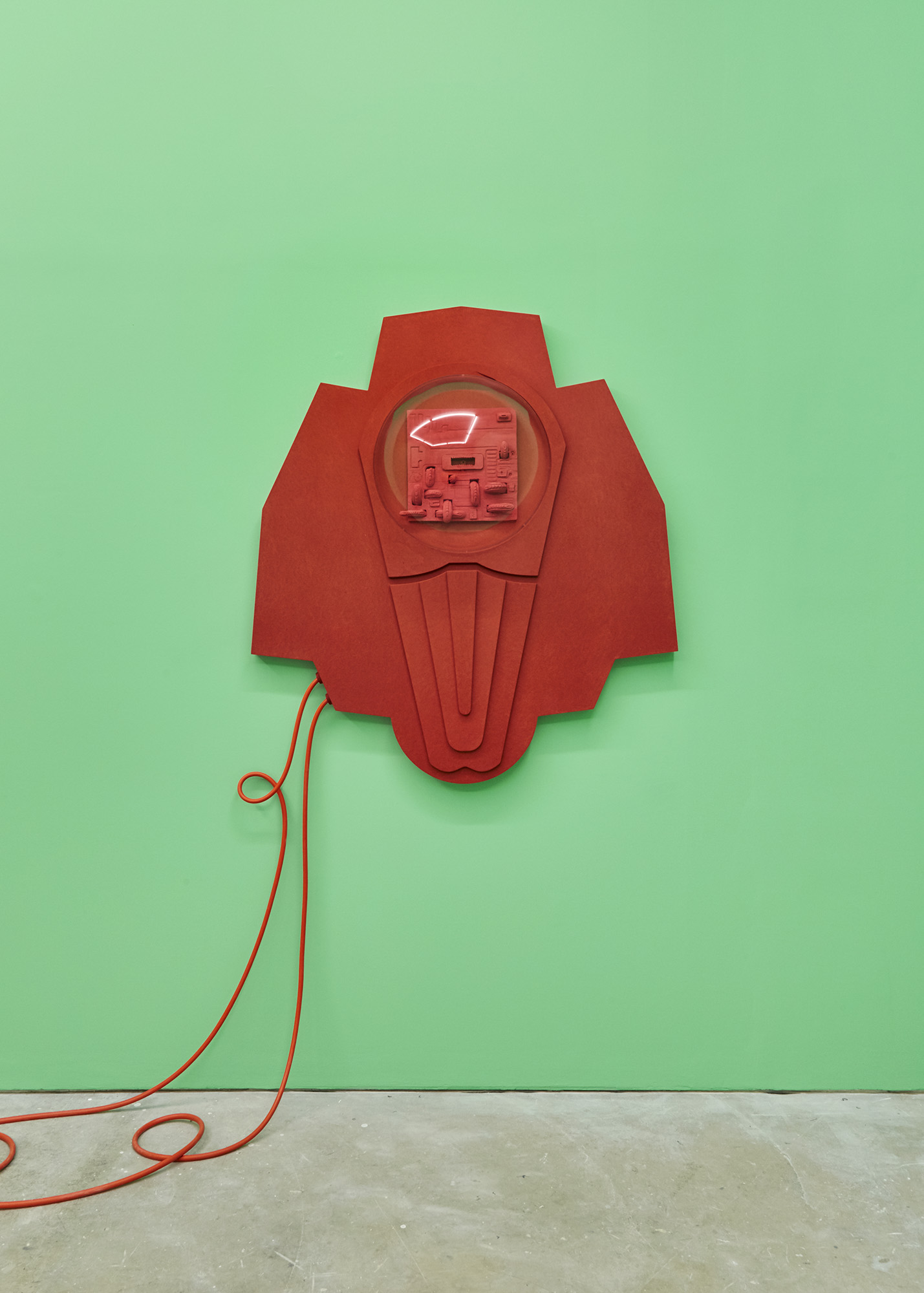 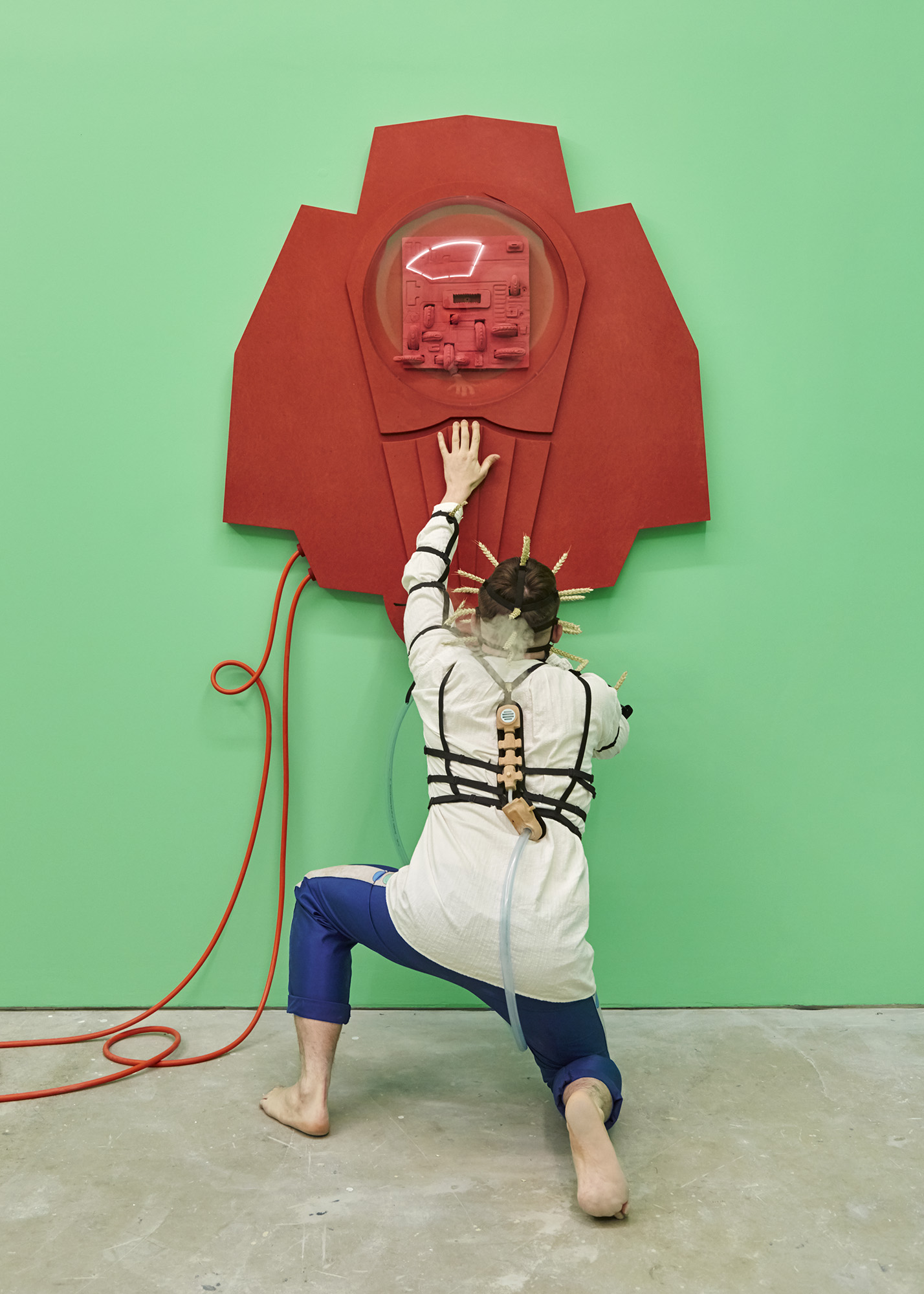 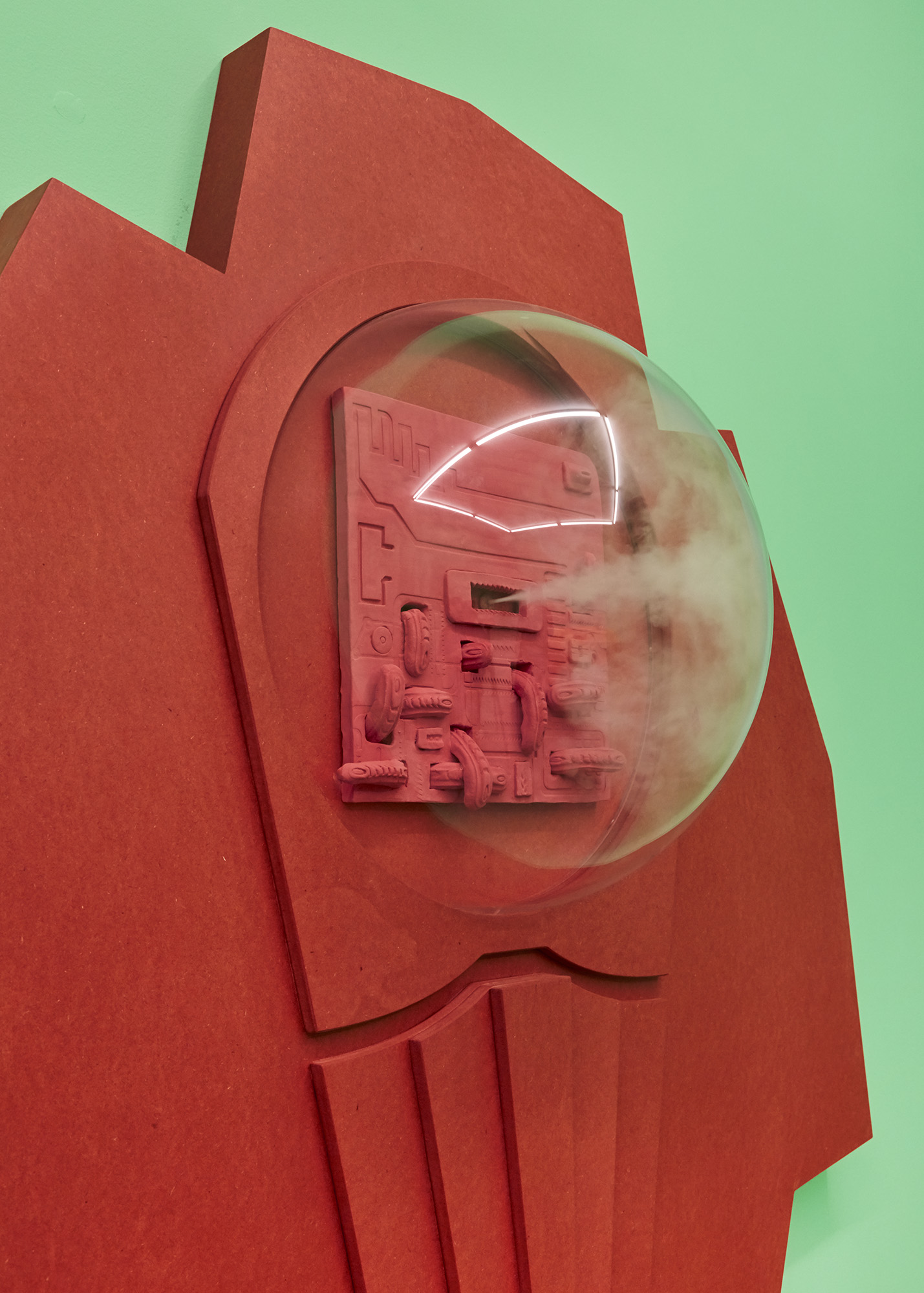 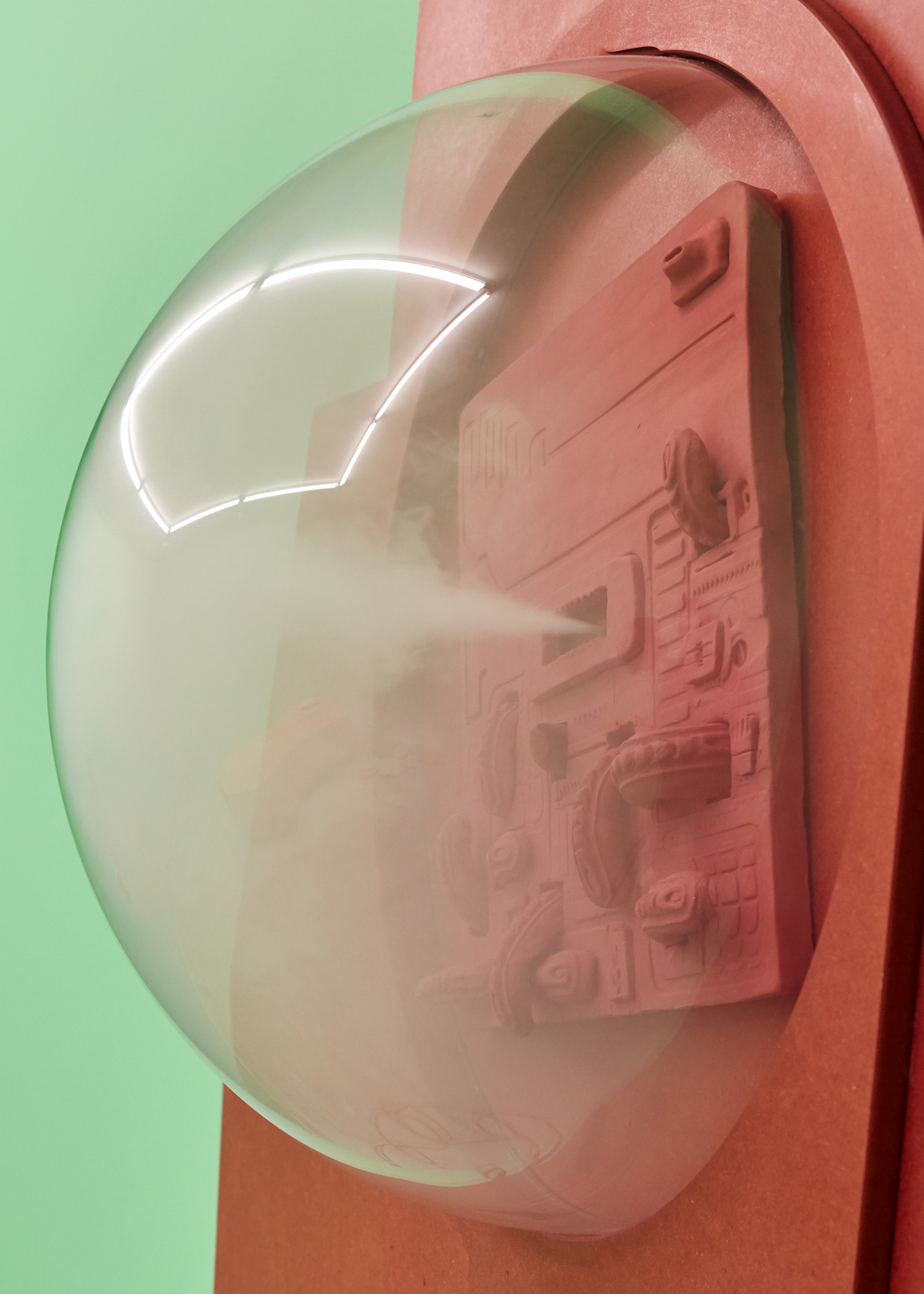 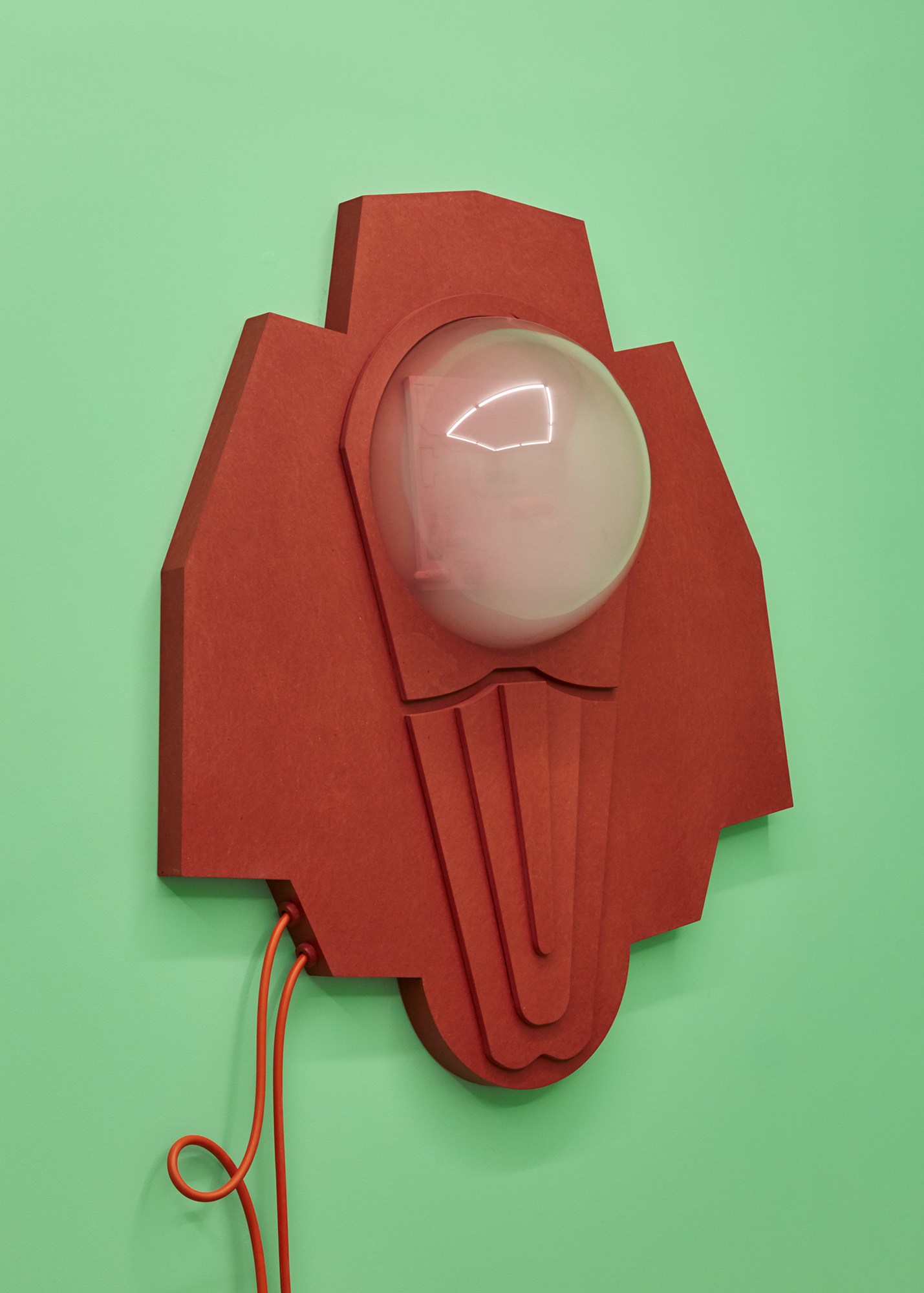 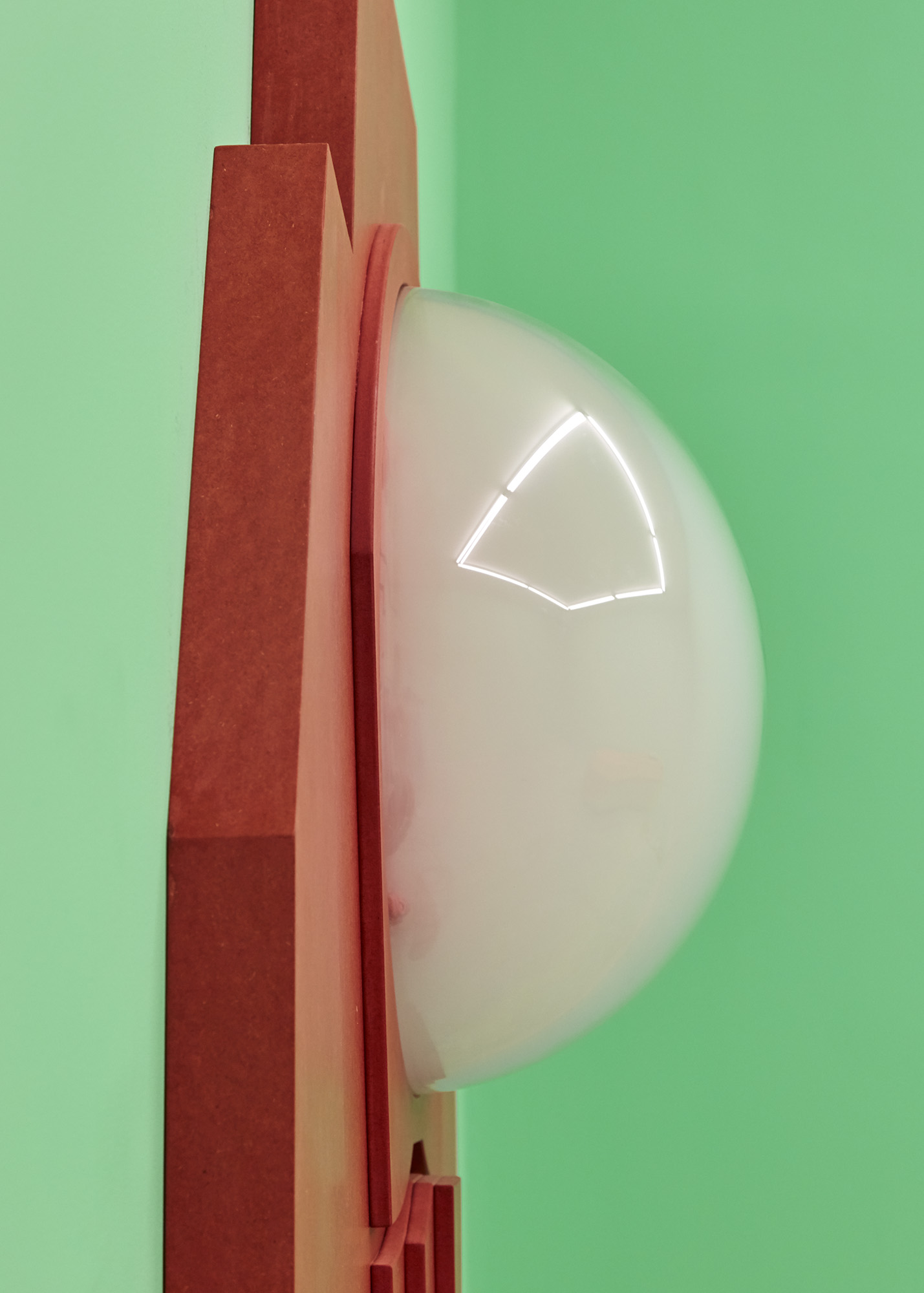 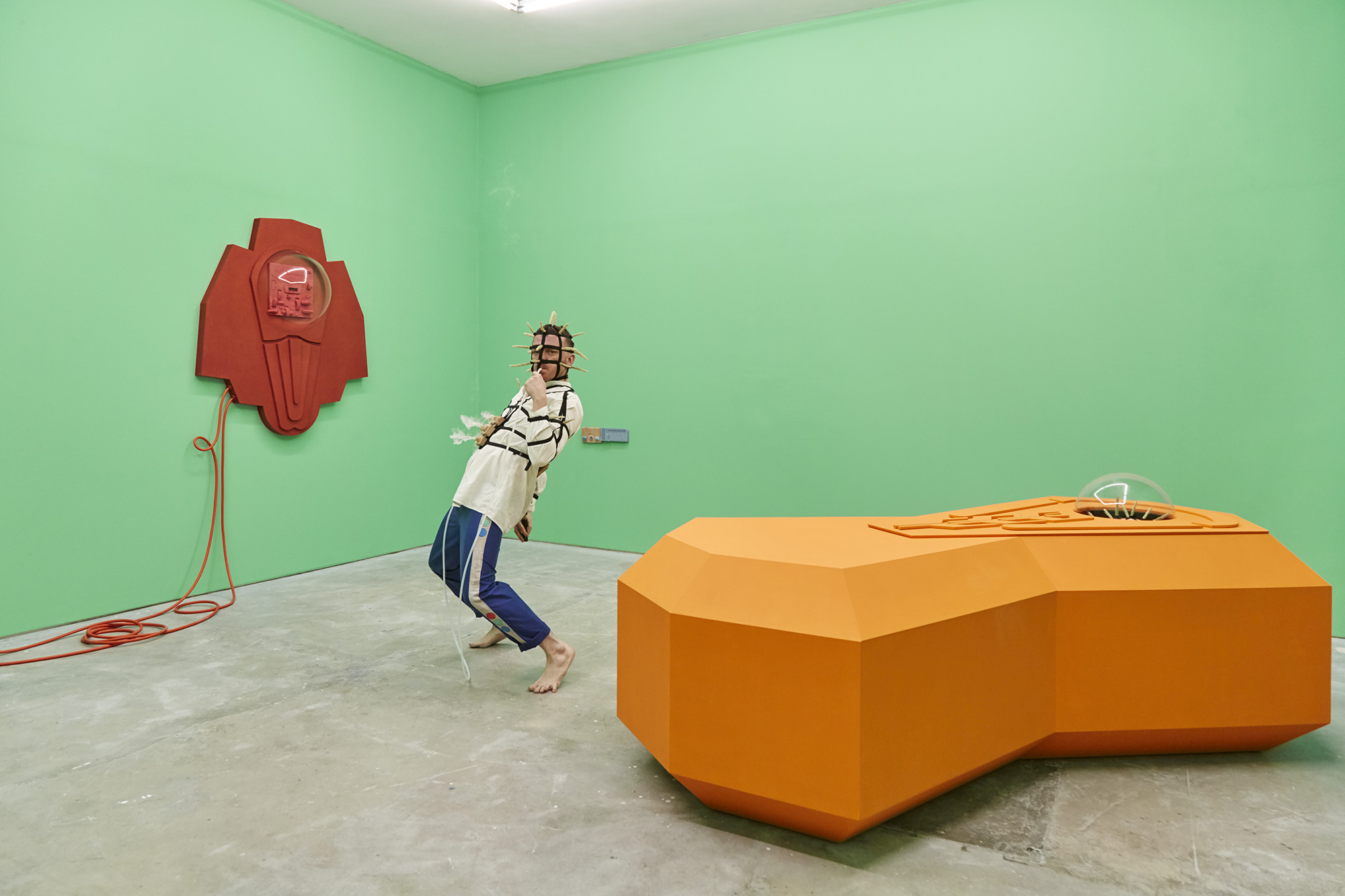 Installation view with Zajko as Chochol 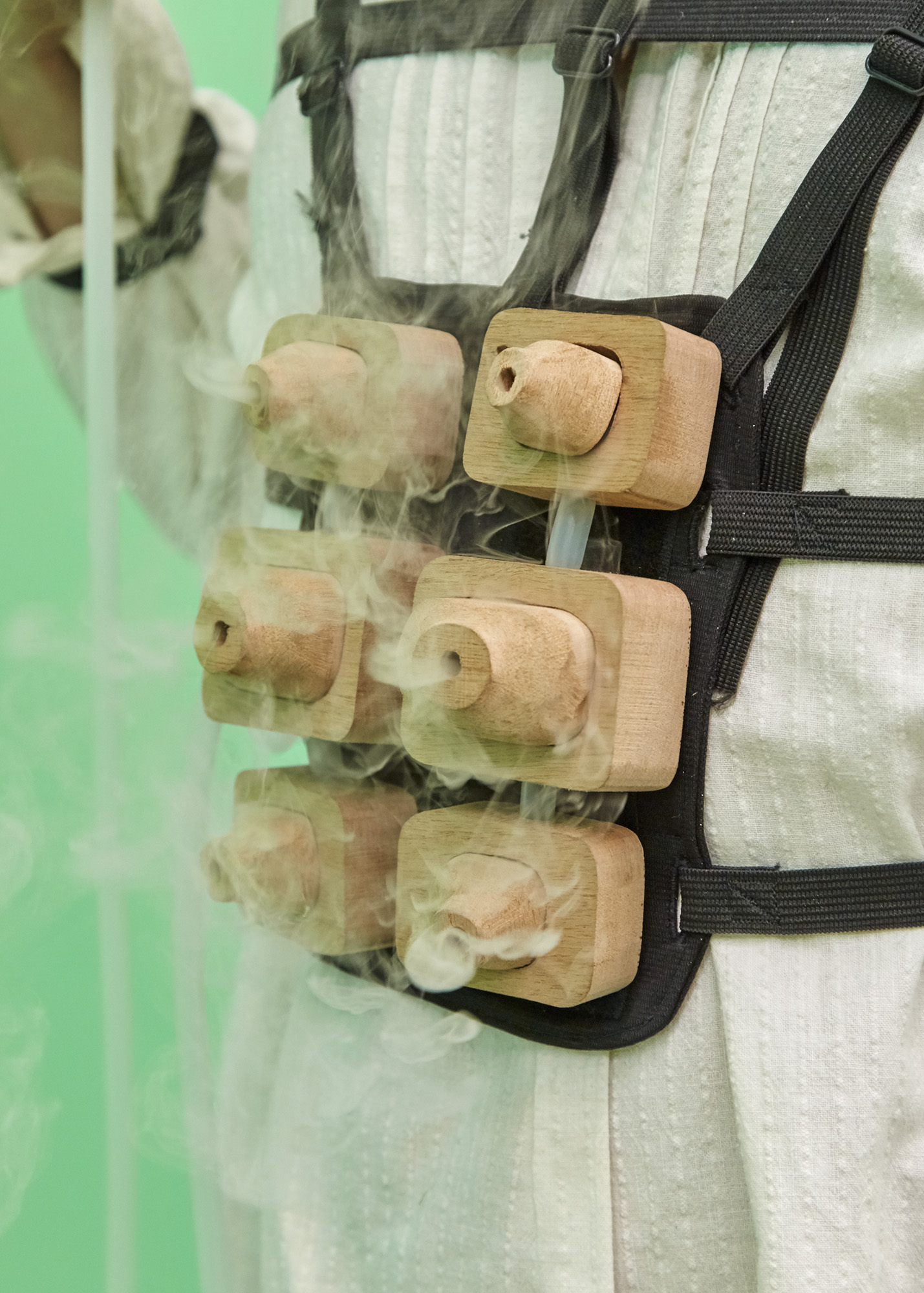 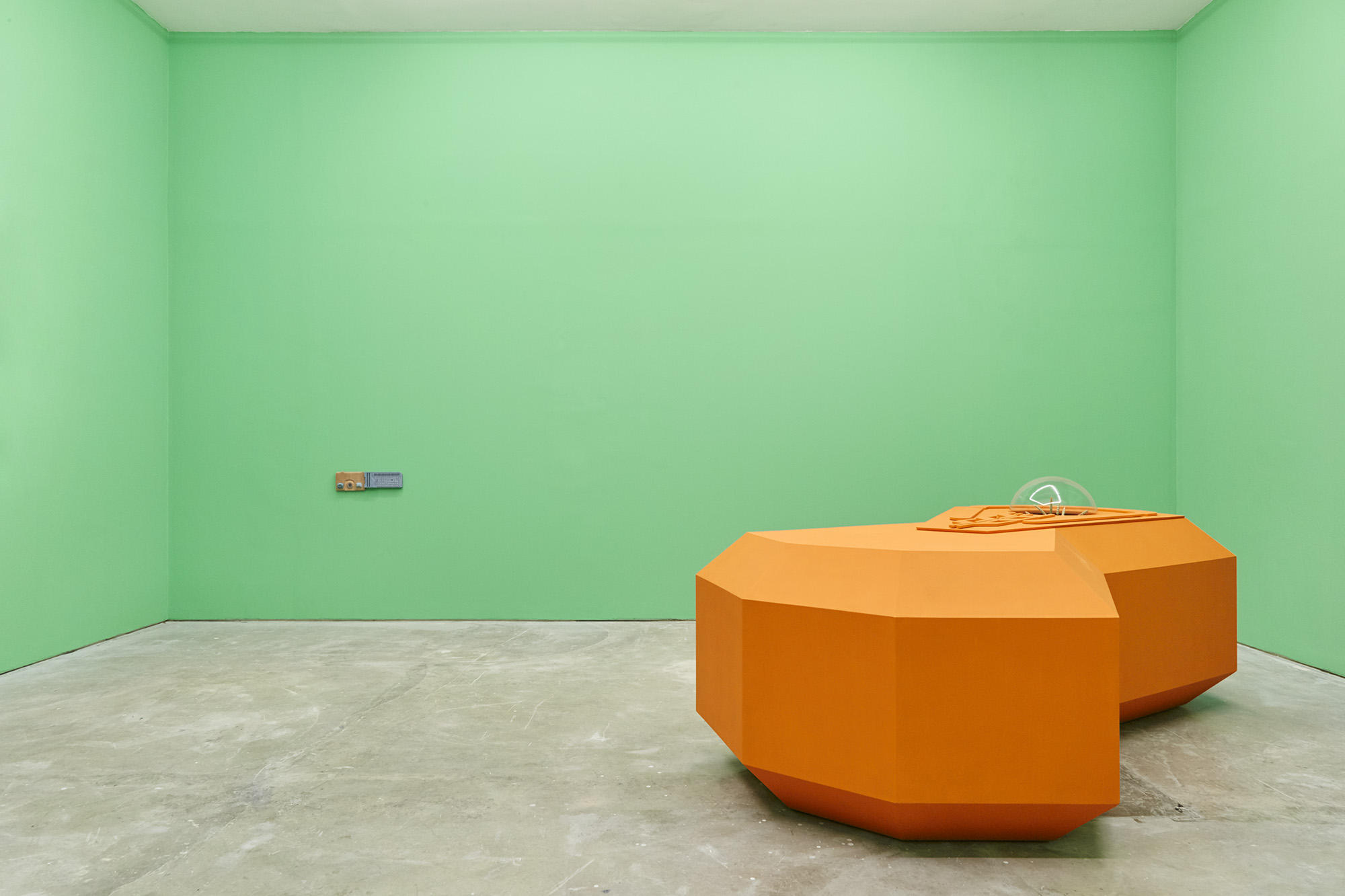 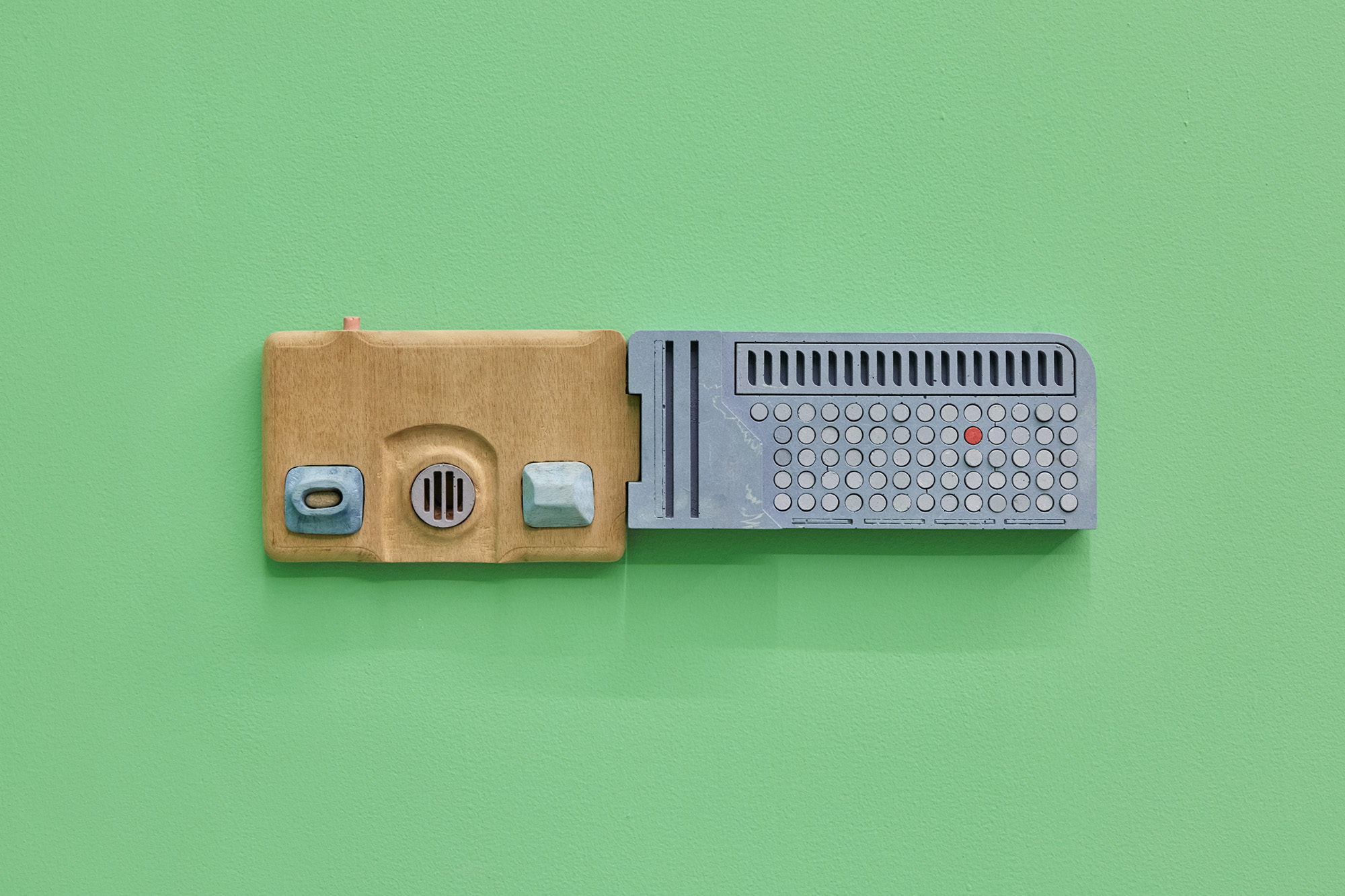 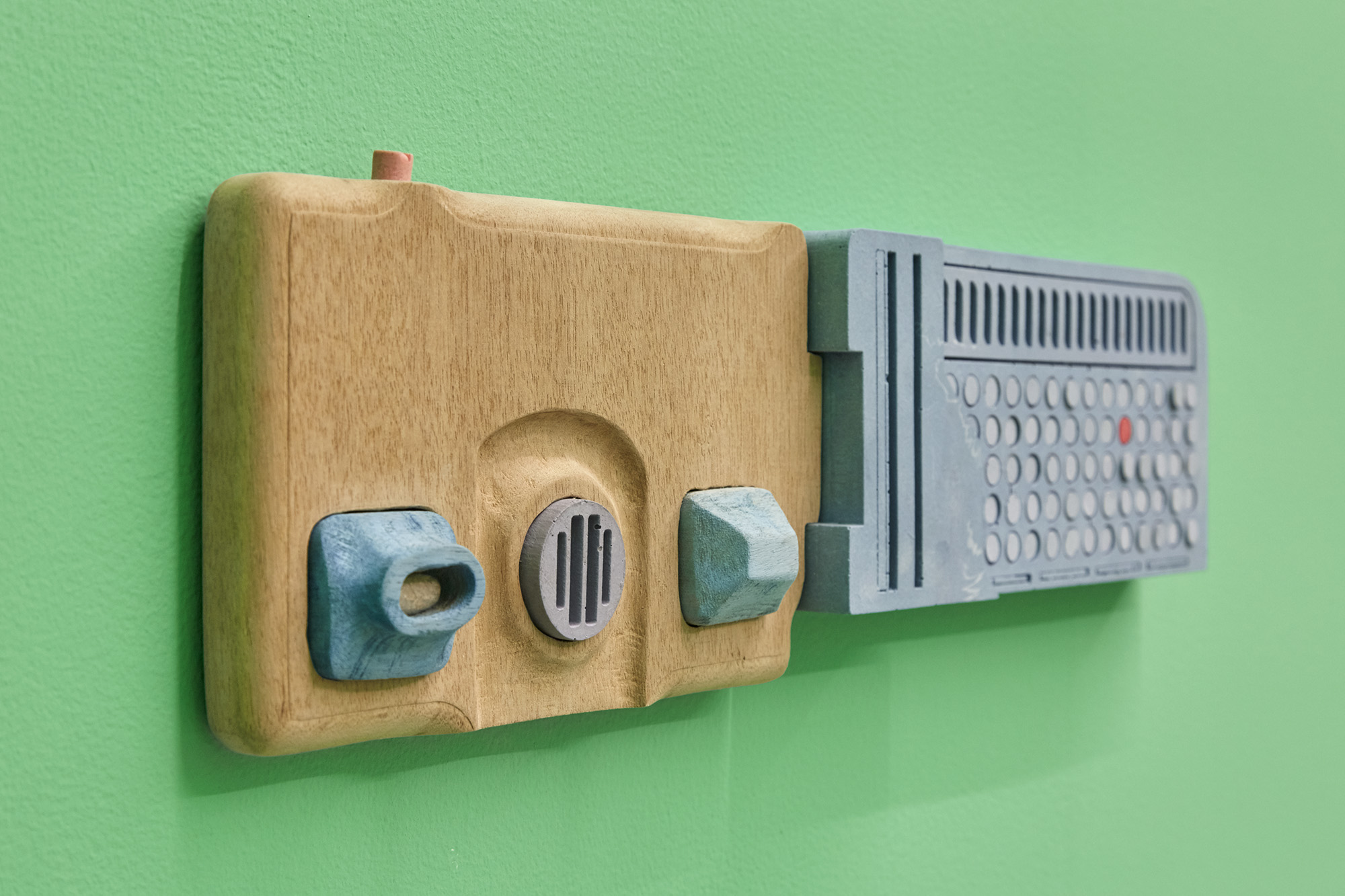 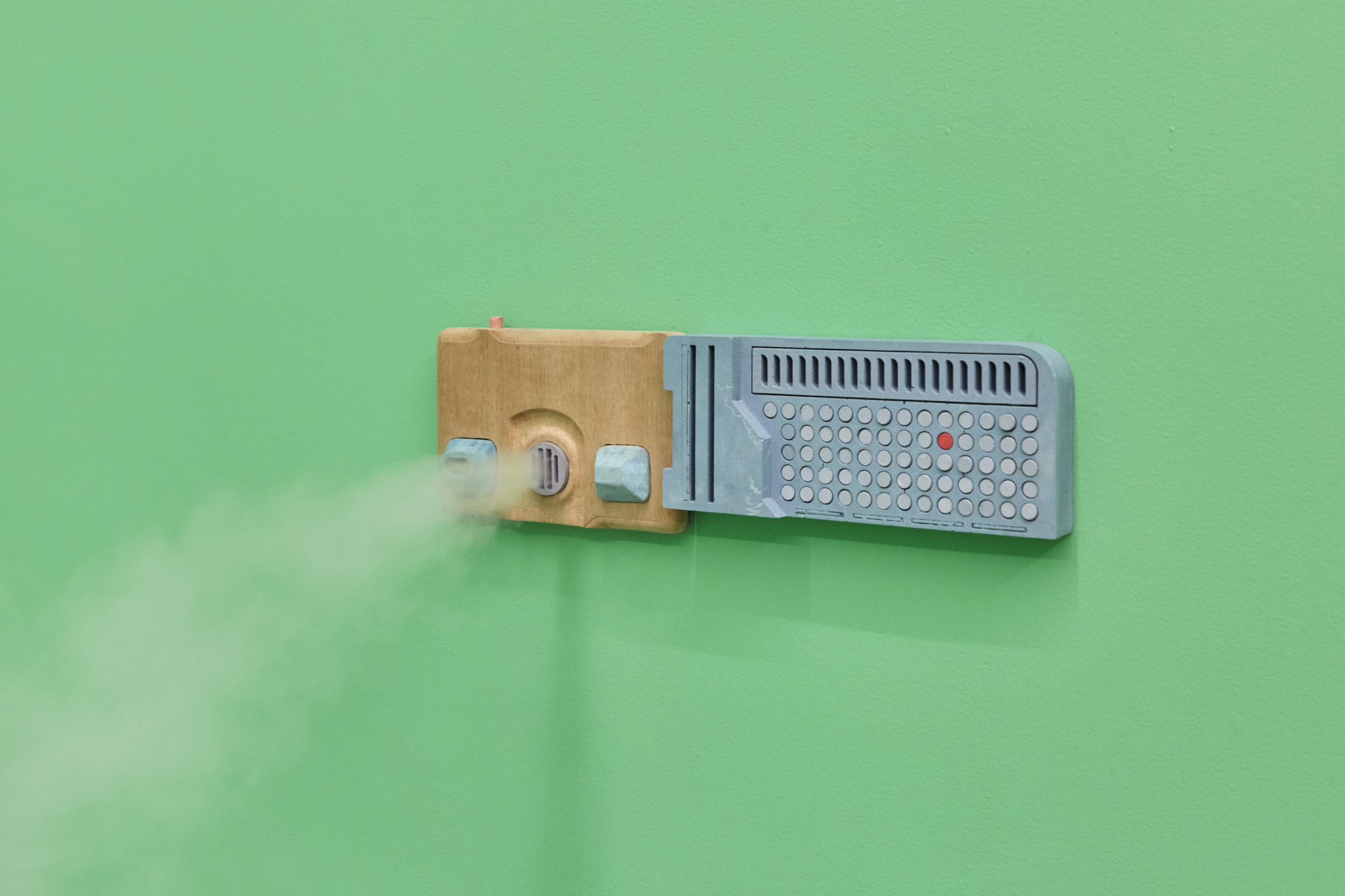 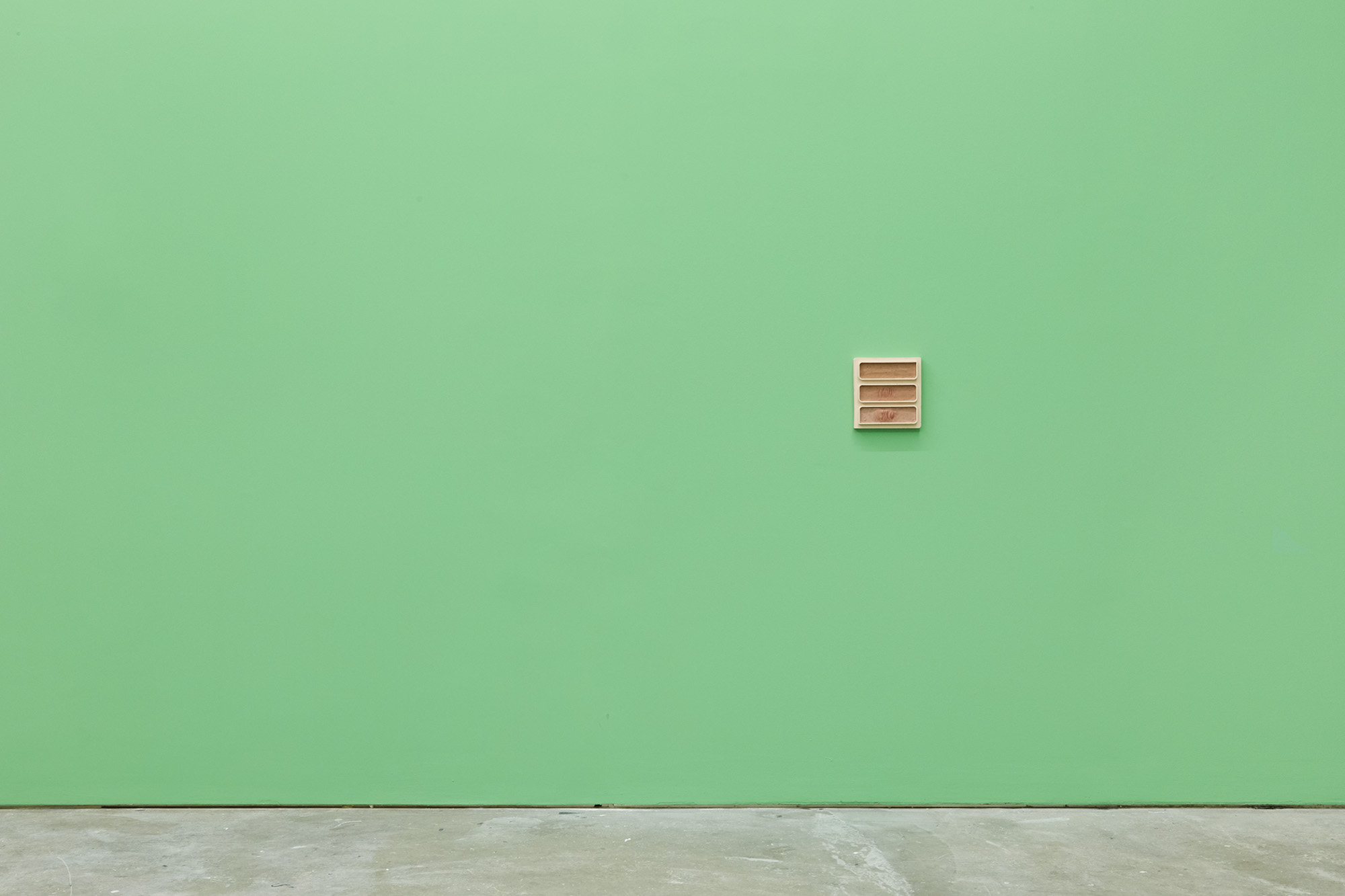 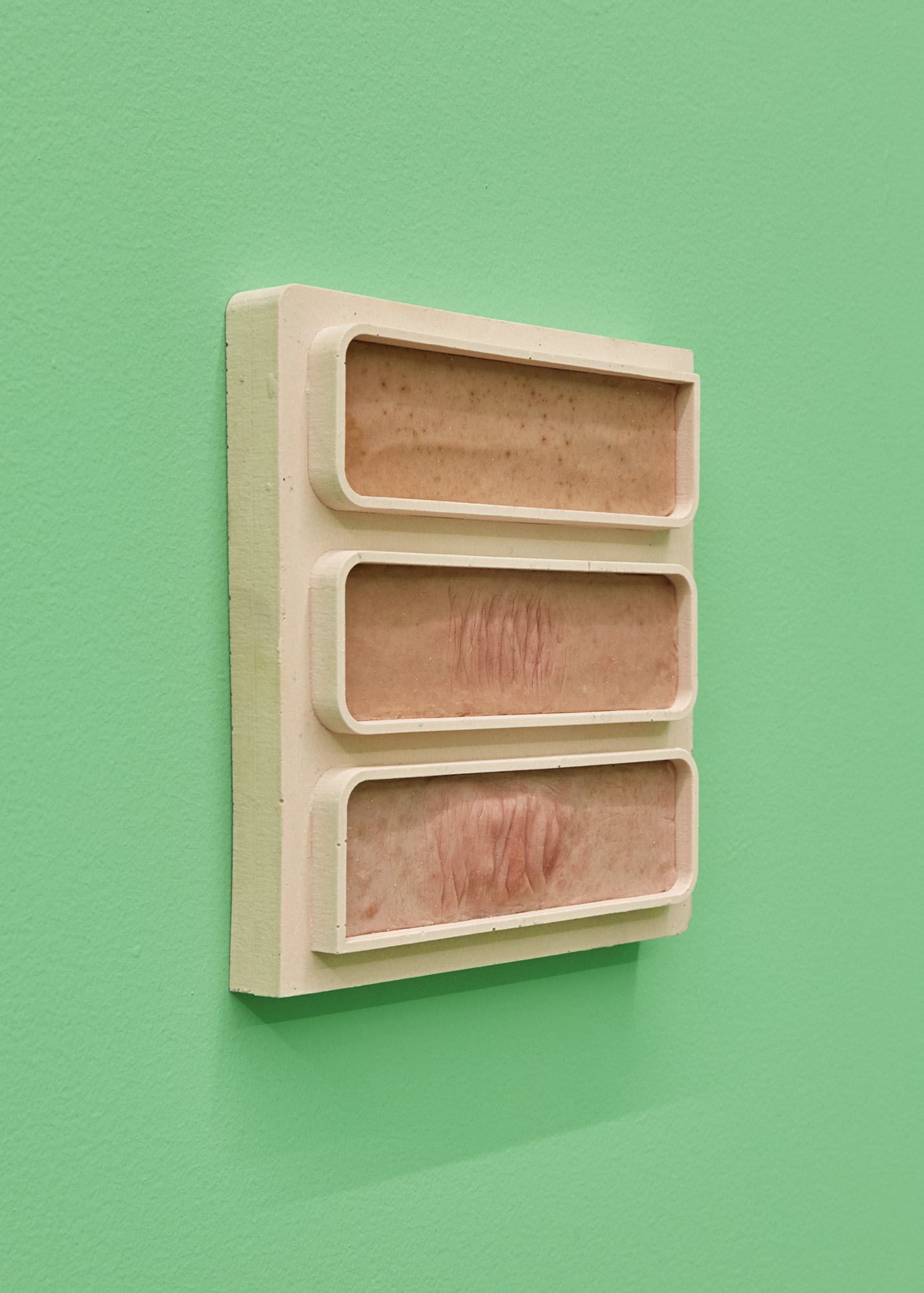 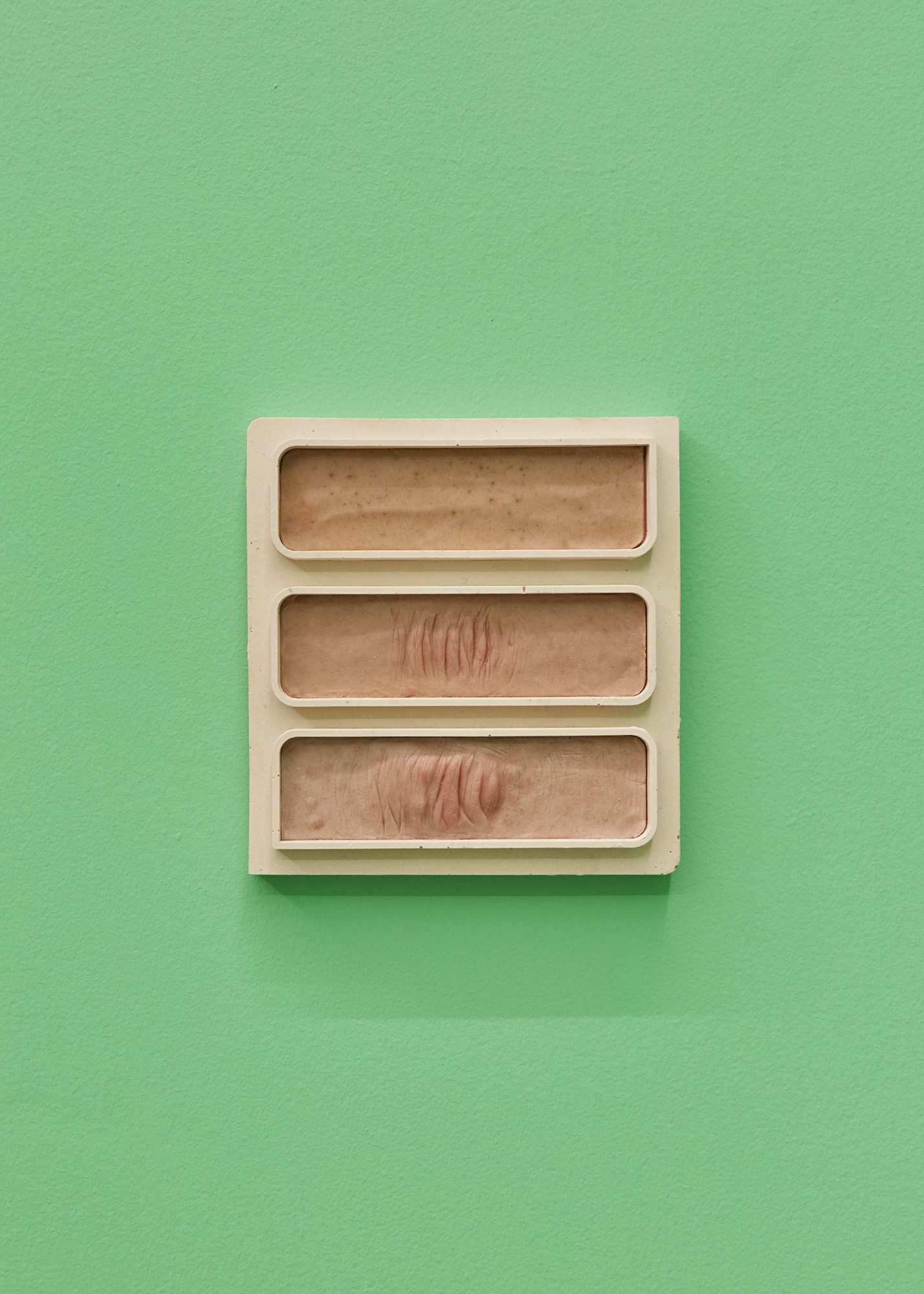 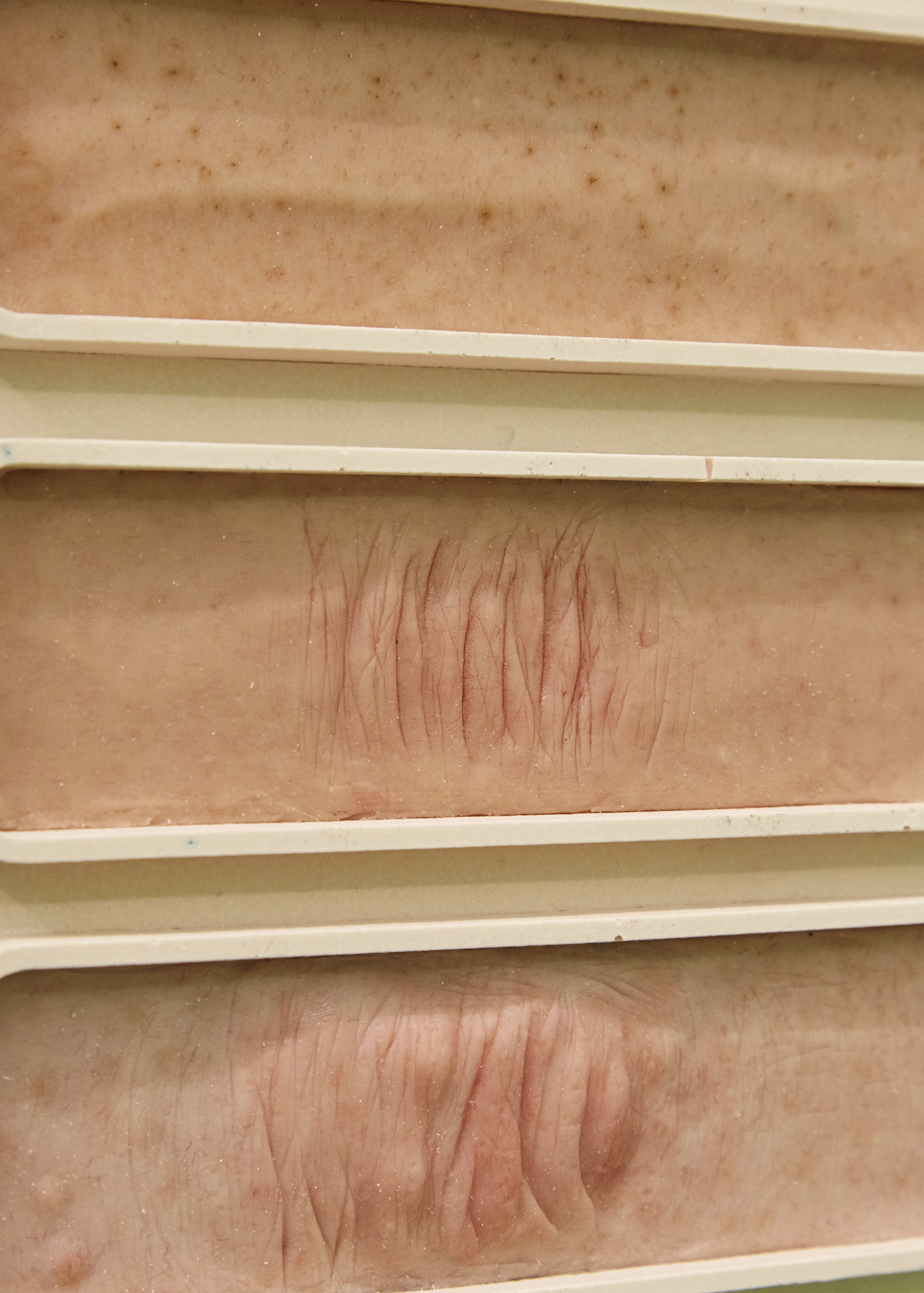 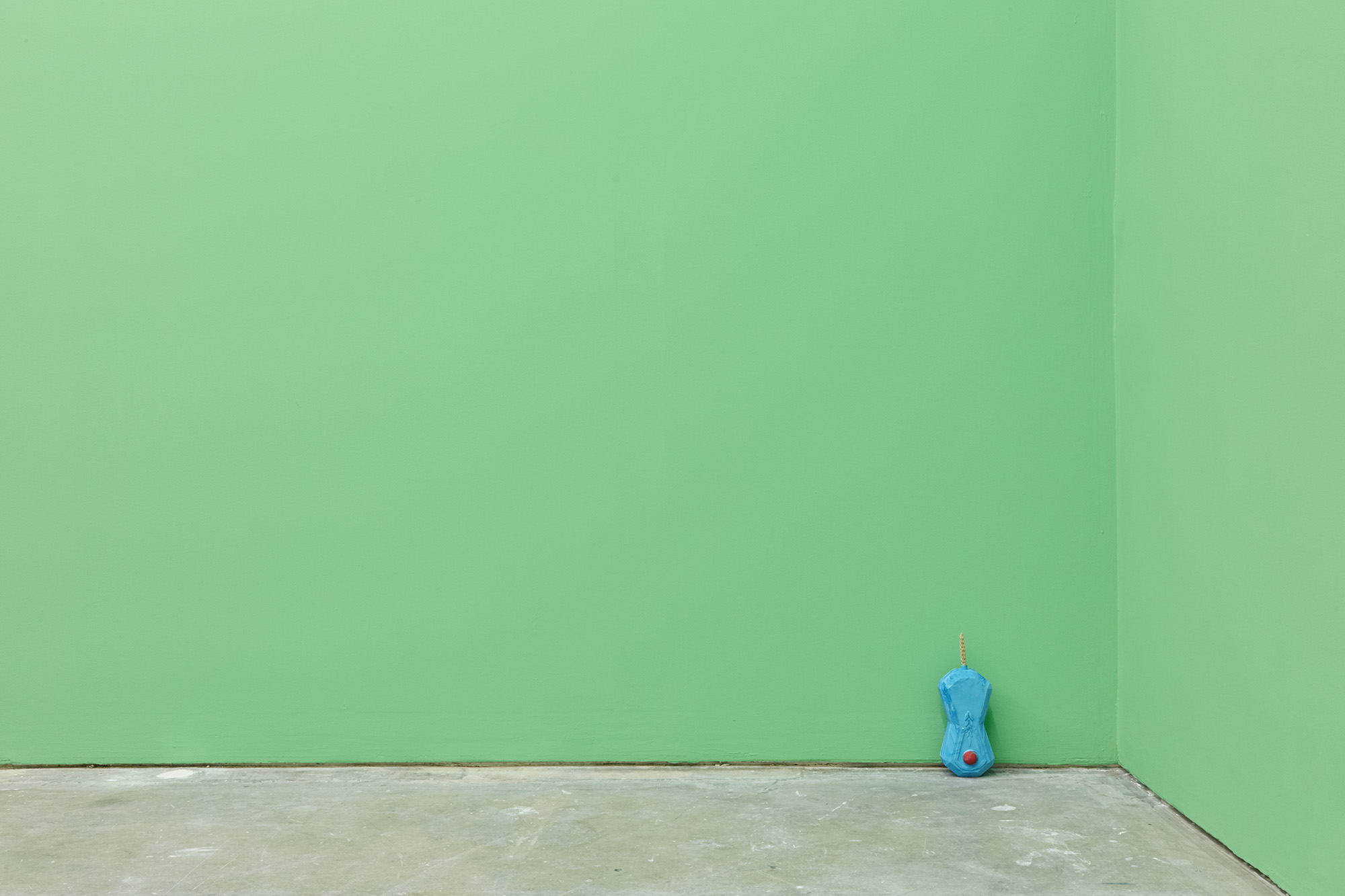 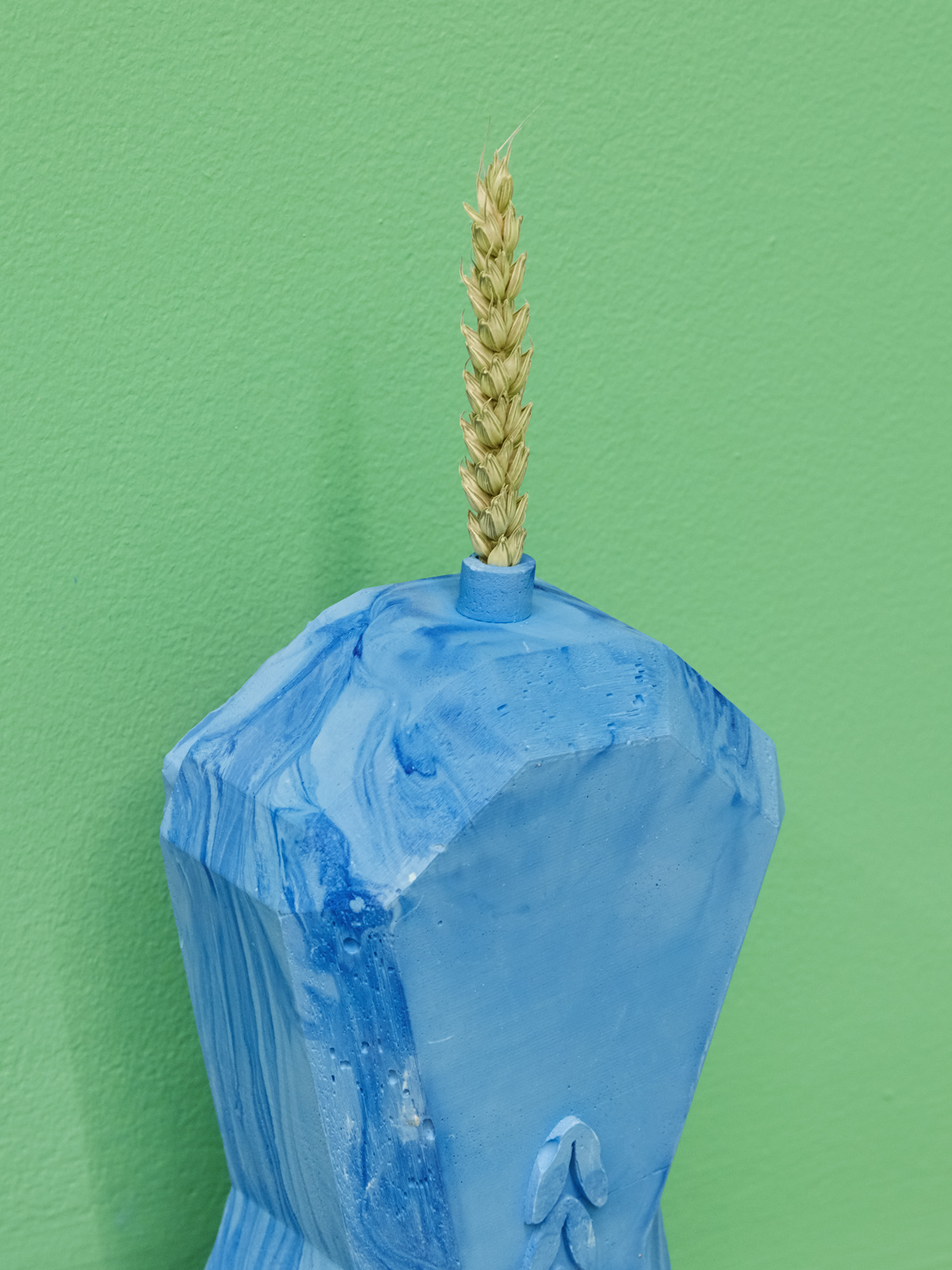 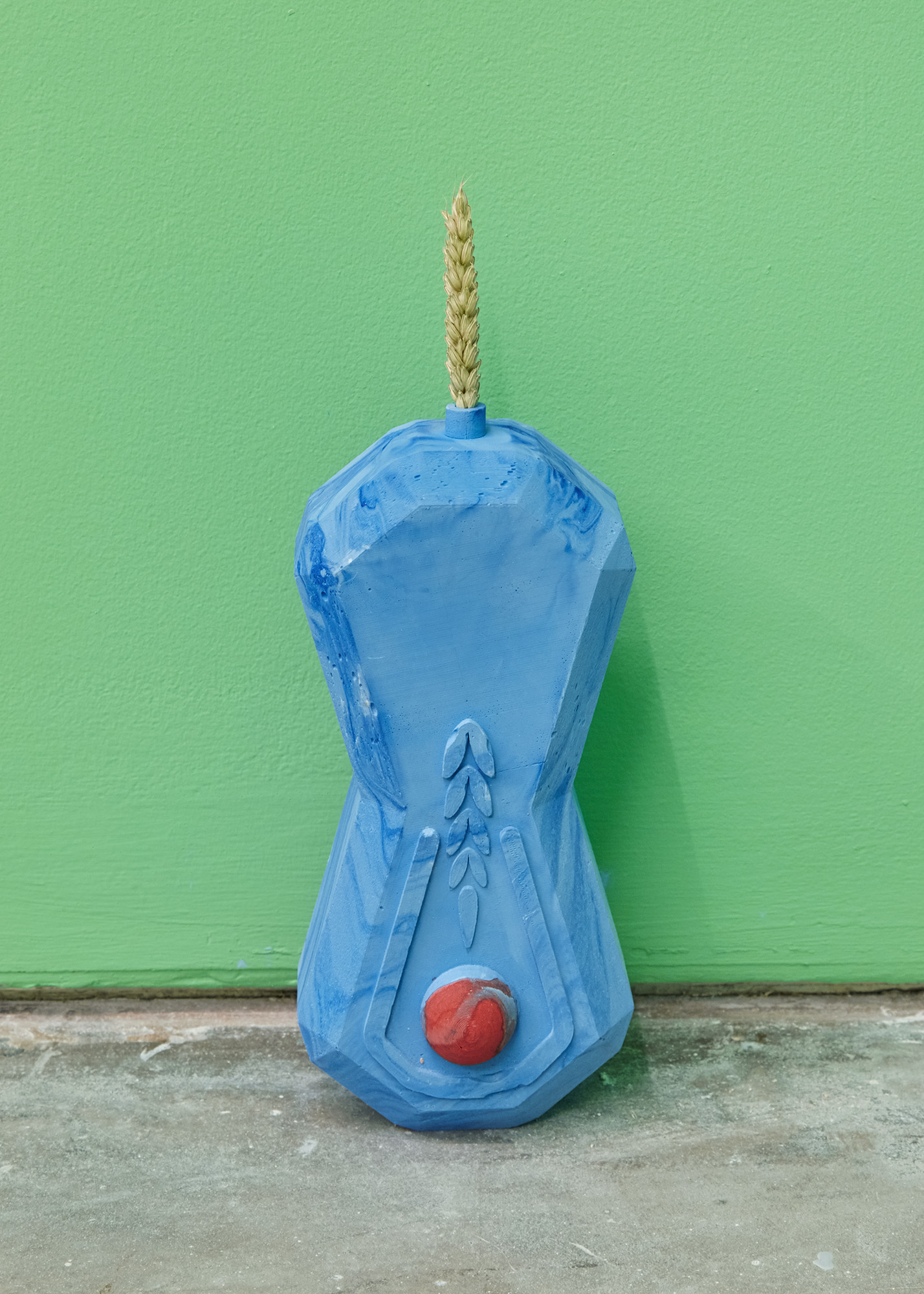 Resuscitation is a form of artificial ventilation, through stimulating respiration in which a rescuer presses their mouth against that of the victim and blows air into the person’s lungs.

One could alternatively see resuscitation through the lens of prosthetics and extensions to the human body; breathing life into the inanimate object or with Mary Shelley’s chosen method, a bolt of lightening.  With the rise in body modifications, whether as an adaption in the functionality of the body through emergency intervention or cosmetic interference, the holy grail of eternal life is nearer our grasp than ever before.

Zajko sees the vape as a mirror to our times, a reinvented and repackaged version of a past we are told to no longer trust. As with the cyclical nature of life, we are so accustomed to being presented with new definitive truths, only for these to be disregarded in the next edition. Our lives seem to work in parallel with yesterday’s science fiction, from transportation to personal communication devices, whilst our vision for a future has been foretold, seen crumbling into nightmarish dystopias at the pens of Hollywood writing rooms.

Folklore seems to rarely exist outside of nostalgia, a once-yearly dance around a Maypole, or the spectacle of Morris dancers clashing sticks together in exchange for a dimpled glass pint of ale. Paganism and other beliefs can seem ostracized, only truly apparent when one digs deeper beyond the surface of convention. Yet as bombastic 1960's predictions of the future subside, our futures are now said to be informed by our past. One in which traditional values expressed by craft and folk could exist alongside our modern ways. One where a personal farmstead is seen as the greenest method of feeding one’s family over mass farming and warehouse megastores.

Here, Zajko looks to the past of his Polish upbringing through his take on the character ‘Chochol’ (pronounced ‘Hohou’), the personification of a straw structure positioned around rosebushes to protect them from harsh winter conditions. Chochol features in Stanisław Wyspiański’s 1901 novel The Wedding,  portrayed as a mischievous character causing havoc when ignored by the wedding guests.

One could look at Chochol as both a symbol of necrosis; dying skin and the decay from the winter, and as one of resuscitation; a harvest of vegetation as a means to give us life and the strength to function and grow. Whilst resuscitation and resurrection have crossovers, one is a medical term, the other more mythical. Wheat and barley come to symbolise the rebirth and resurrection, with bread representing the body of Christ during communion.

Within the gallery space sits a large sarcophagus which hosts the Chochol character within, keeping him alive, a familiar science fiction image, where the protagonist is protected during their journey to a new planet. Elsewhere in the space we see a wall-based sculpture outlined in the shape of the moth ‘Parastichtis suspecta’, last seen in the UK in 1962, and thought to be extinct until they were rediscovered in 2018.

Has humanity’s footprint on our planet sunk too deep? Have the scars caused by the towering chimneys of the industrial revolution left a wound which won’t heal? With yesterday’s optimism and signs of progress now reclassified as a form of self-harm to Mother Earth, are our efforts just too late?

Will we look to the theories of Nikolai Fyodorov and his belief that mankind would get more intelligent, happier and kinder, but only somewhere other than Earth? Passengers awaiting the 17:35 departure of Elon Musk™ SpaceX flight to Luna Base Echo should go to the departure gate now...


‍
Frieze - Behind Closed Doors Review
by Matthew McLean, Senior Editor, Frieze Studios
It being the first day I was told to work from home, I skipped the opening of Rafal Zajko’s ‘Resuscitation’ at Castor Projects – despite the proximity of the gallery from my flat. The Poland-born, UK-based artist’s show seems almost uncannily fitting for this moment: playing with ideas of culture, nature, threat and reinvention through the image of artificial respiration. Named for the biblical resurectee, a glass dome protruded from the wall mounted Lazarus (2020), periodically filling with vape fumes. The largest sculpture, Amber Chamber (2020), looked like an iron lung designed by Pierre Cardin, and housed a resting figure, surrounded by golden heads of wheat: like an ancient vegetation god become man-machine, air-sealed for an unknown future. In whatever ensues after lockdown, I resolve to make more effort with the local.

This is Tomorrow - Review
by Laura O'Leary
Breathing and the nature of our bodies as something that air passes through have never been considered so urgently as in this show. Rafal Zajko, a London-based, Polish artist, has been making wall-based works that look like vents for a year; a fact I discovered during a remote conversation with Zajko to discuss his exhibition, ‘Resuscitation’, at Castor Projects in London, which was open for just one day before its closure due to the COVID-19 pandemic.

‍At first glance, ‘Resuscitation’ appears as the set for a space-age laboratory in the form of a sculptural installation–we are clearly entering the future, with all the technological advancements that it brings. A large, vibrant orange tomb called ‘Amber Chamber’ (2020) takes centre stage, whilst other sculptures in bright, carefully considered colours are placed at varying levels around the room. Everything looks functional, clinically perfect almost–the words “don’t press the big red button” feel right at home here. The walls are dark green. Zajko lets me know that this colour is at once reminiscent of hospital scrubs, whilst also indicative of arsenic, referring to ideas of both healing and damaging in a binary act that recurs throughout this exhibition.

In the tomb, there is an artificial-looking male figure with his eyes closed. Only his head is visible, which is styled with a headpiece embellished with wheat, acting as a barrier, protecting him whilst simultaneously adorning. This is Chochoł (pronounced Hohow), from Stanisław Wyspiański’s 1901 play ‘The Wedding’: a mythological story from the artist’s youth in Poland. In the 1901 version, Chochoł was an anthropomorphic creature–think Cousin Itt from The Addam’s Family. The form of the character was inspired by the sheaves used to protect rose bushes in Polish fields against the winter frost, whilst warding off animals, and often mistaken for human figures. In short, the sheaves were a human intervention to keep something alive, much like the act of resuscitation.

In Rafal’s home province, Podlasia, you can find Bialowieza, the only medieval forest in Europe. Podlasia is also a place that has spiritual healers and herbalists, paganism mixed with religion. Catholicism was embedded in Rafal’s upbringing–he lets me know that the idea of “the breath of life” was a marker in his youthful thinking alongside folklore and mythical stories. Rafal had planned with Castor Projects to include multiple performative elements in the show, where he would breathe and re-breathe into the sculptures through a vape. There is something of a ‘good guy’ and ‘bad guy’ attitude here–breathing new life into these sculptures while emitting a gas that is scientifically unknown, resurfacing questions around the safety of vaping.

We can quickly look to ‘Lazarus’ (2020), a sculpture shaped like a moth that was believed extinct in 1962 until it was rediscovered in 2018. In this show, life is reappearing, much like the character of Chochoł. The costume worn by Chochoł is described by Rafal as ‘biological armour’; a merger of peasant and sports clothes, traditional and modern labour. The costume has wooden-carved abs and a protruding spine–a handmade aesthetic suggestive of how Chochoł was made in the woods.

Before the closure, Zajko performed a piece called ‘Interludium’ (2020). For this, he wore the same costume as the entombed Chochoł; embodying a character whose very matter is rooted in the earth, protecting the harvest. Zajko sung a traditional Polish funeral song; it was sombre, beautiful and filled the space with new meaning. Here, the artist as Chochoł laments the new realm he has entered; even in this futuristic, fictional world, things are not okay. The lyrics of the song speak of saying goodbye to the world and everything around you, welcoming a new planet and the promise it holds…

During Rafal’s performance, a vape sits on the ‘Amber Chamber’–the native gemstone of Poland. We discussed the meaning behind the vape and Zajko revealed how his work often cites the Industrial Revolution, typified by his earlier, concrete structures. The act of vaping is dramatic, like something static suddenly becoming active. Zajko referred to the steam rising from factories, an indication of progress as well as decline as ecosystems are consequently destroyed.

“Returning from the brink,” Zajko explained, was something that really struck him about this work. ‘Resuscitation’ could be seen as a funerary monument to the imagined future of the global eco-crisis, but with the hope that there is potential to return from the brink.