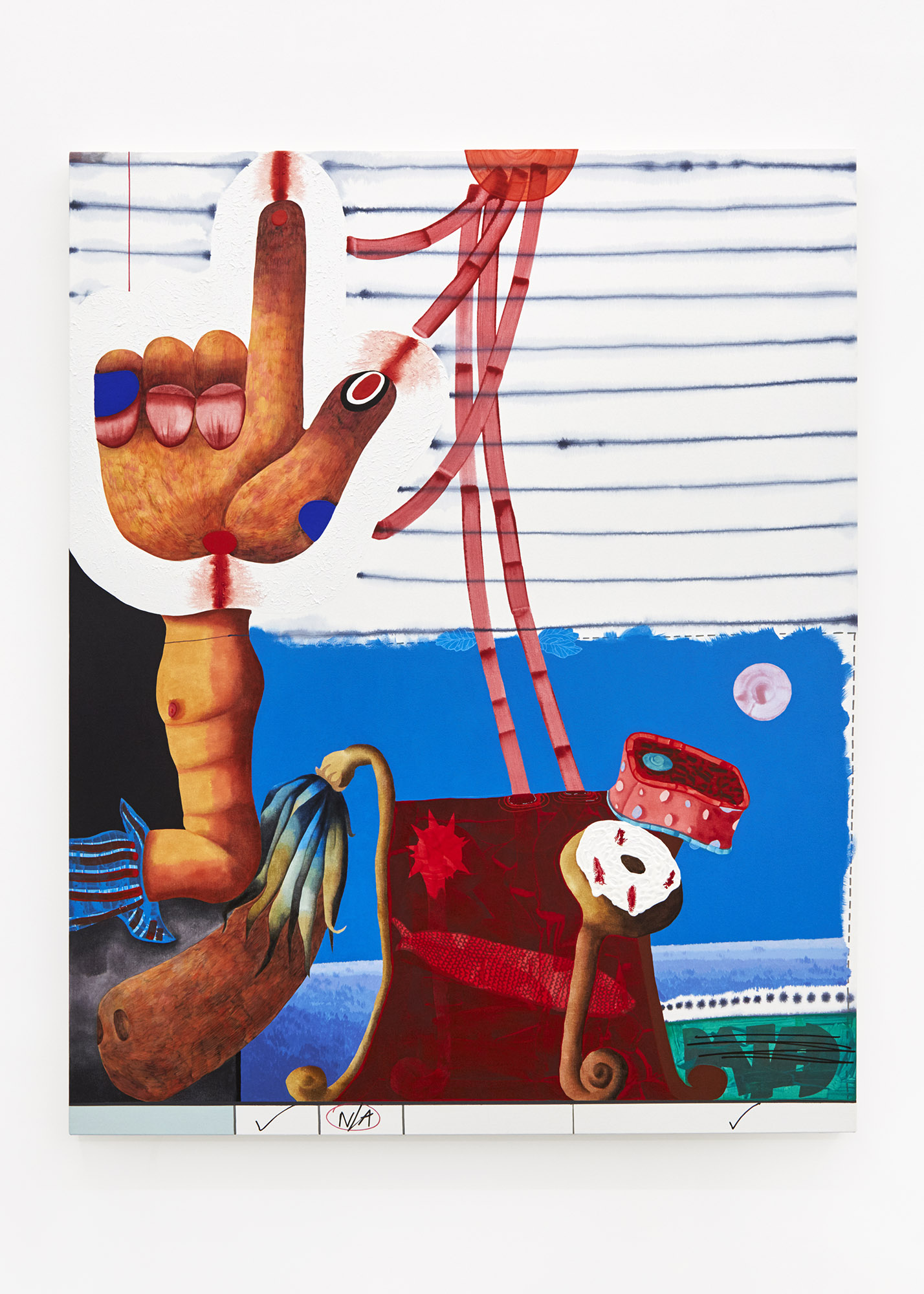 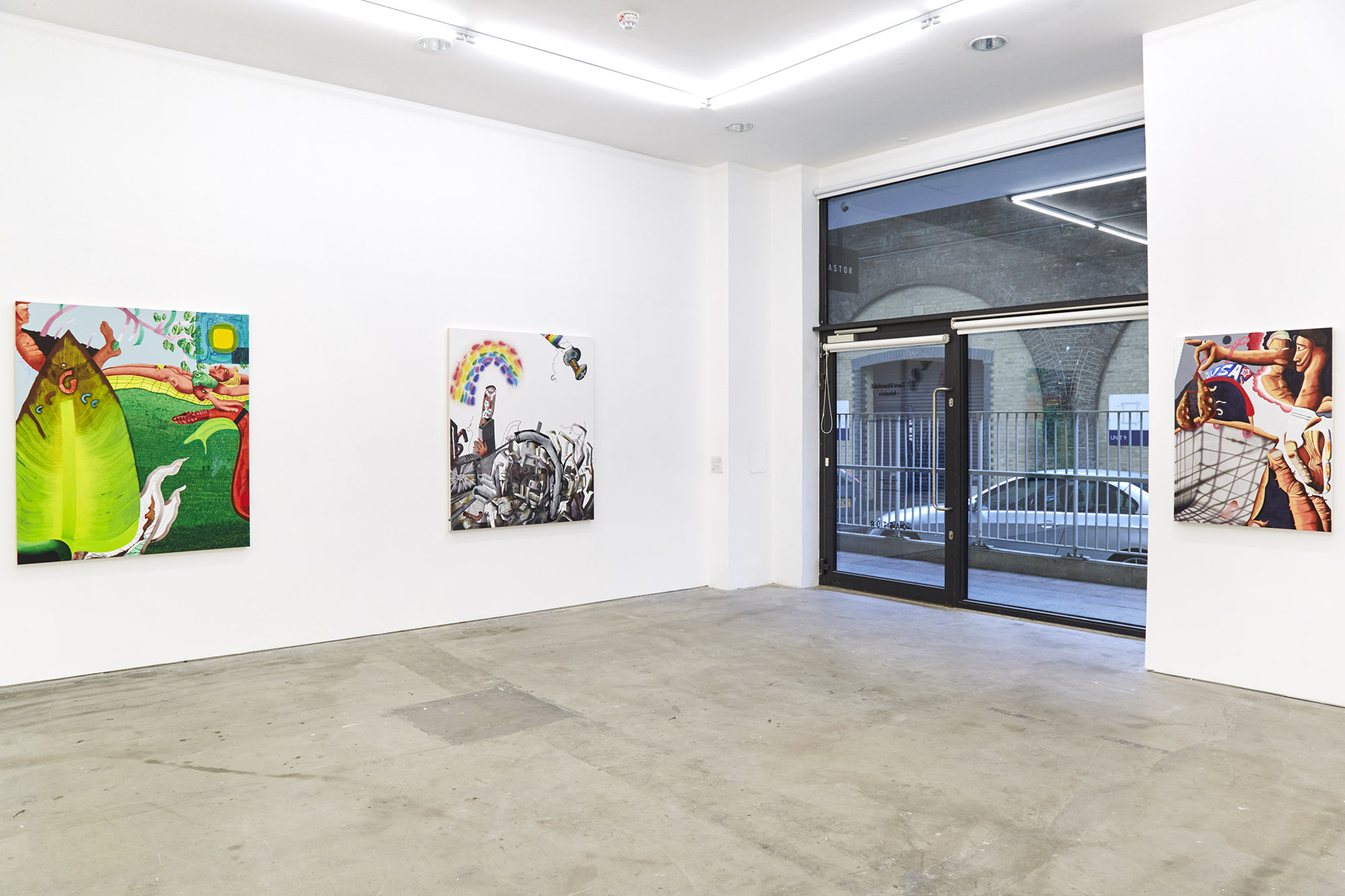 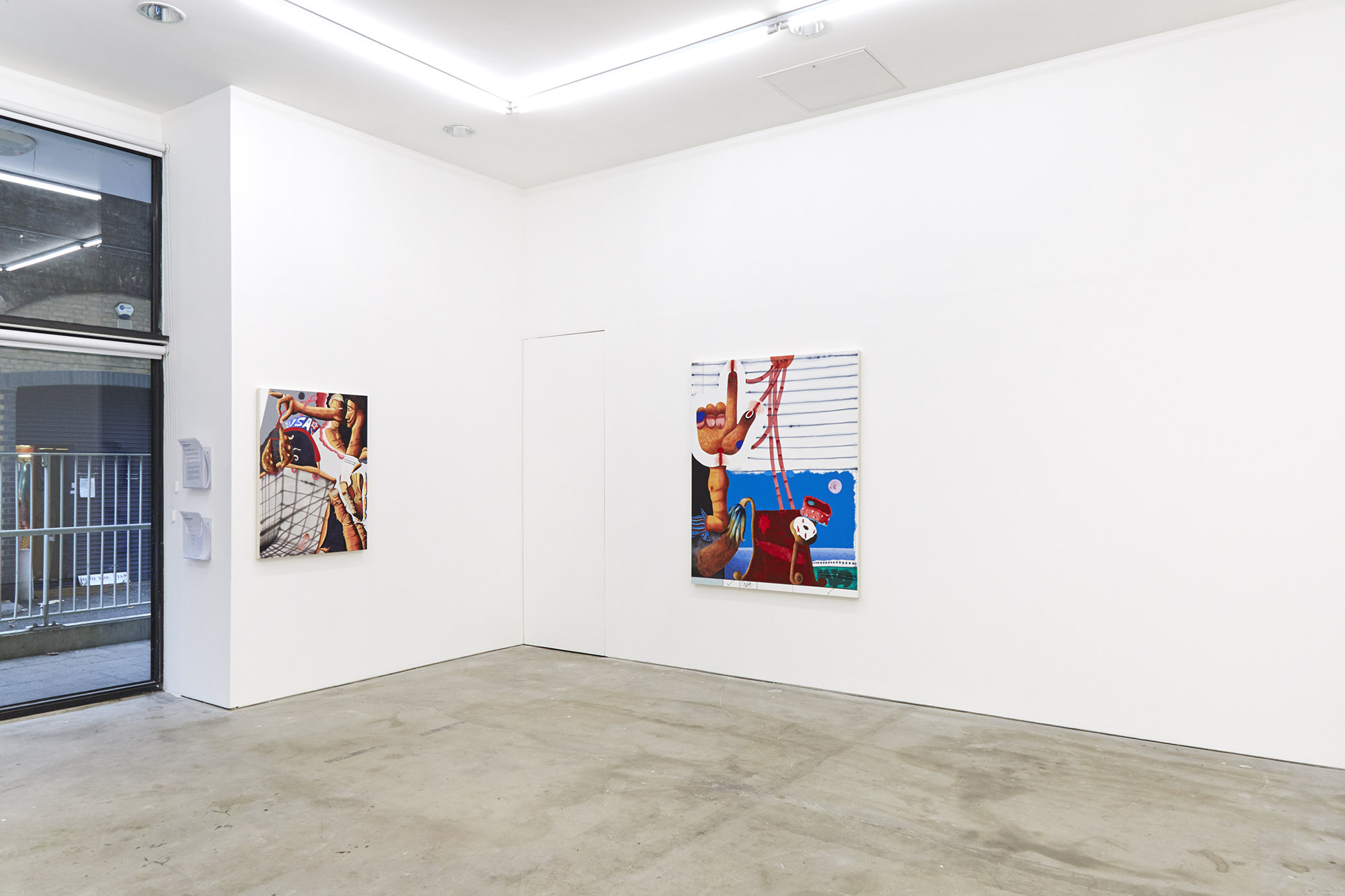 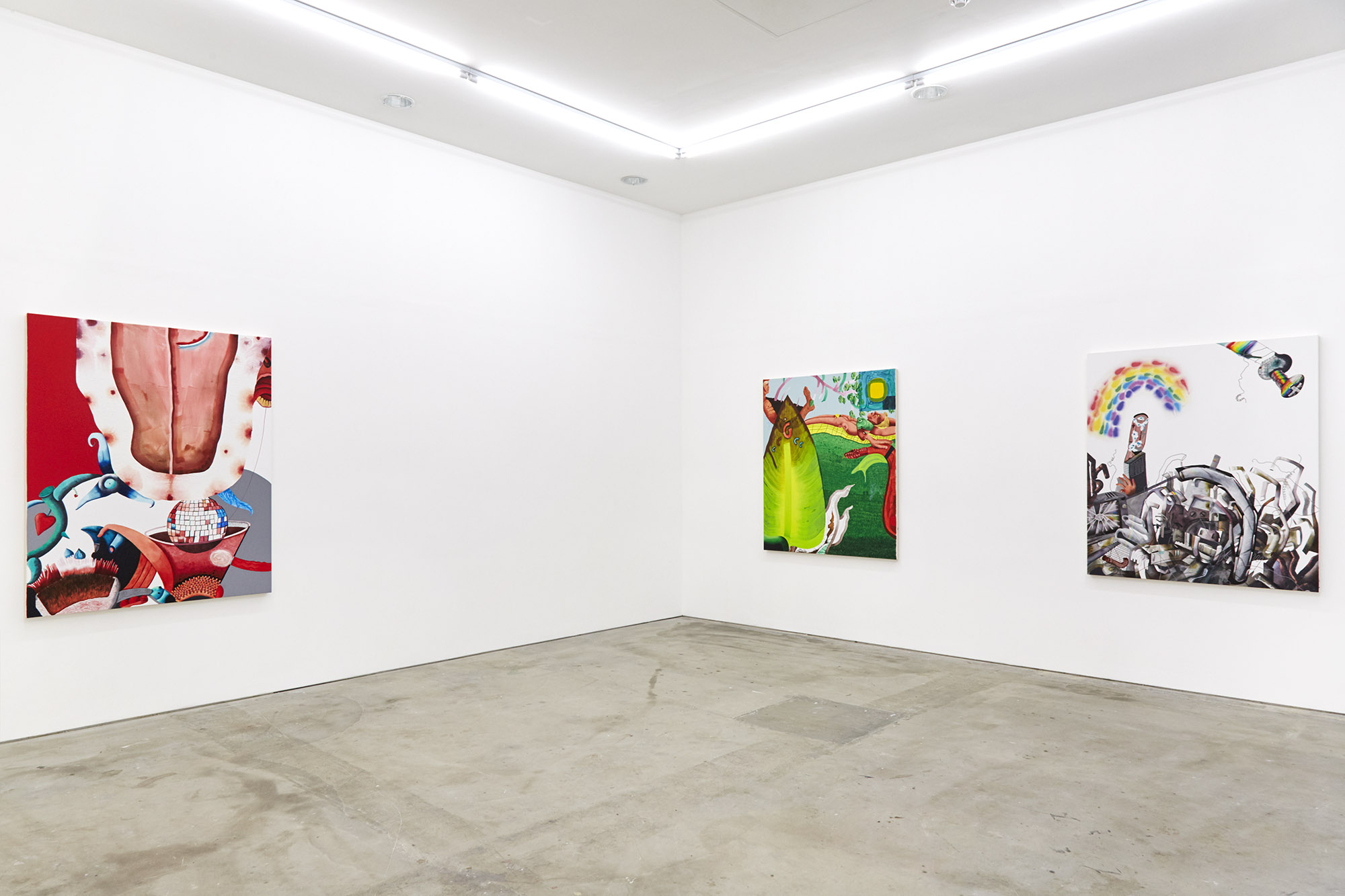 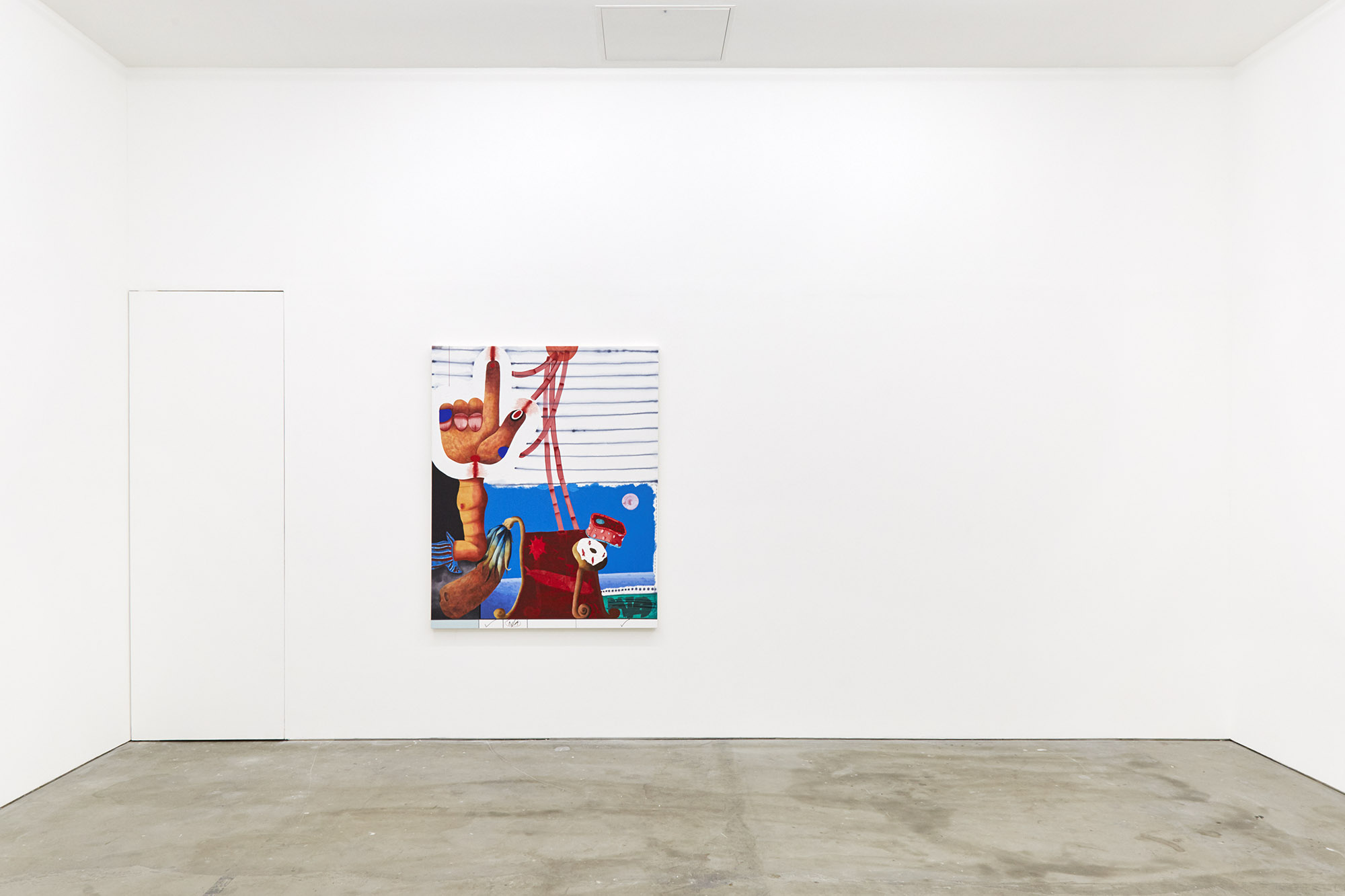 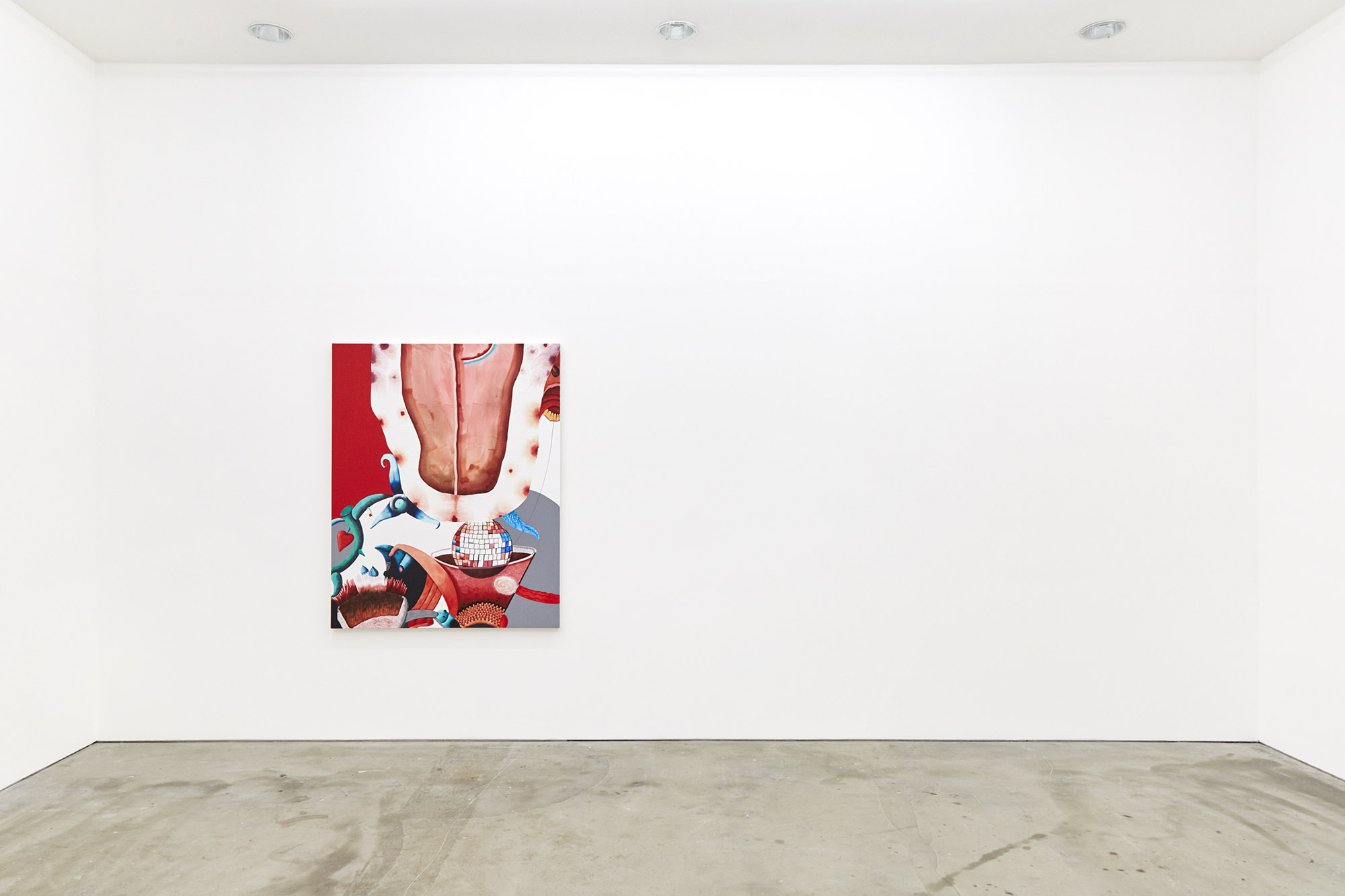 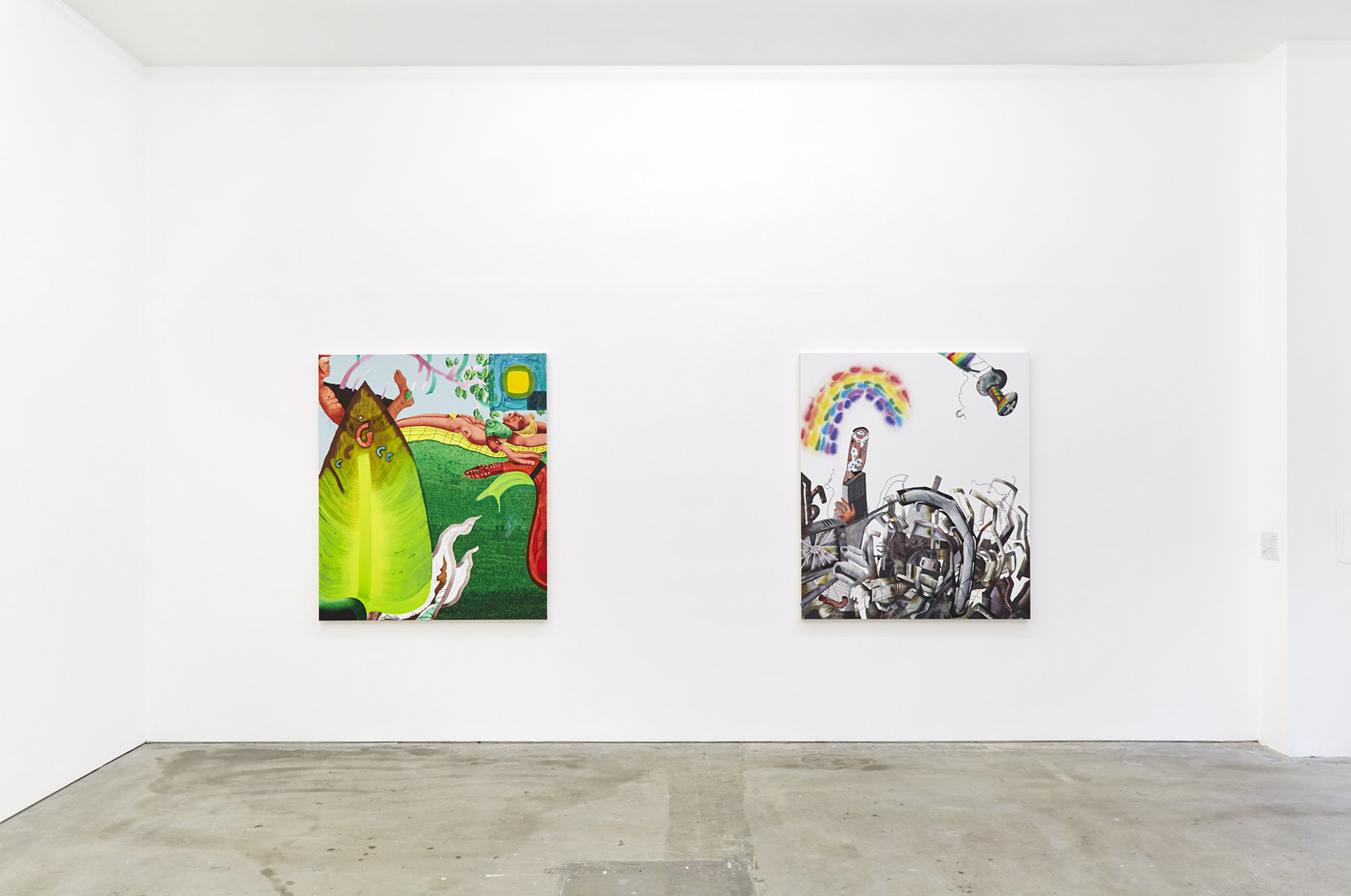 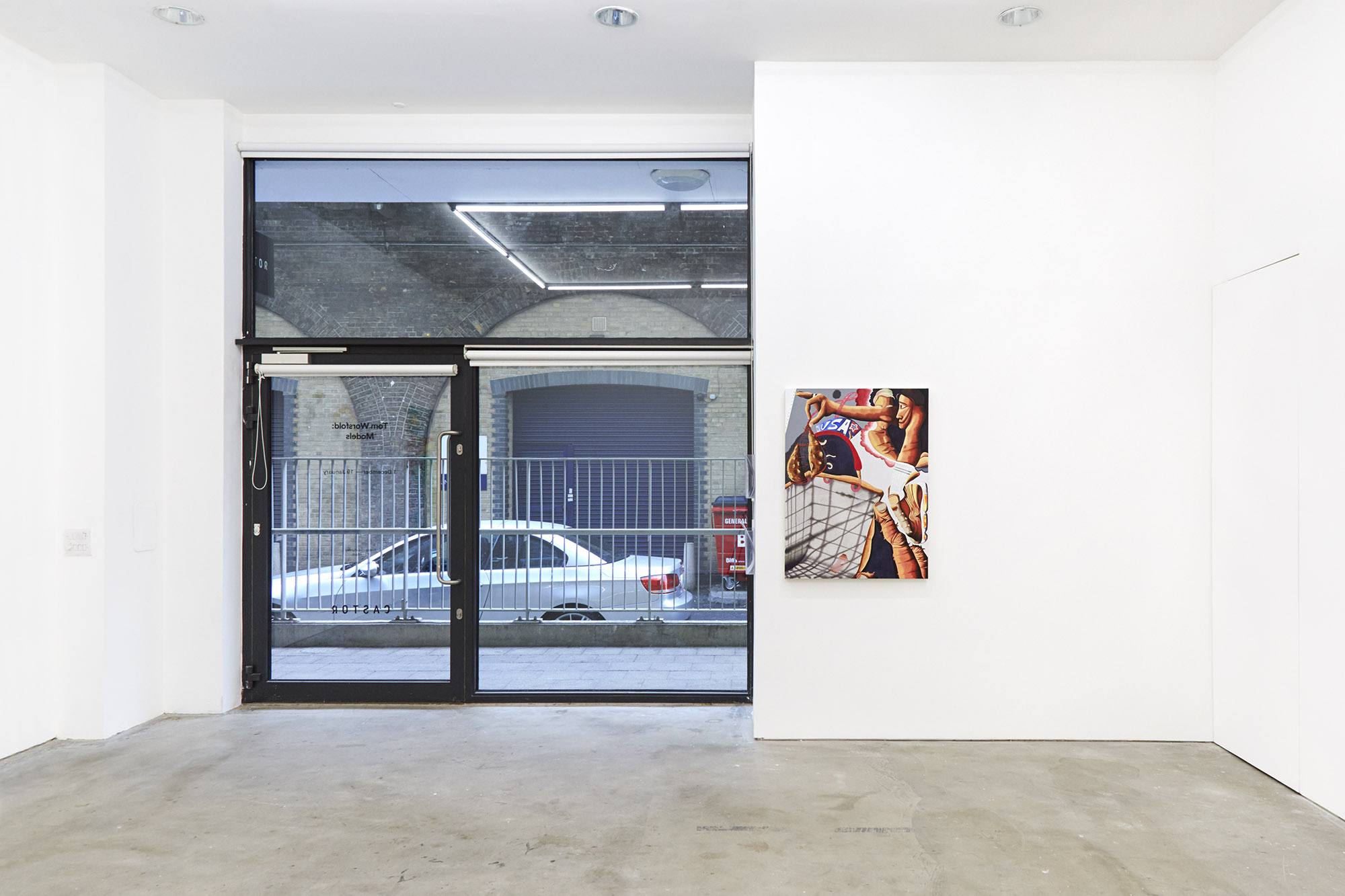 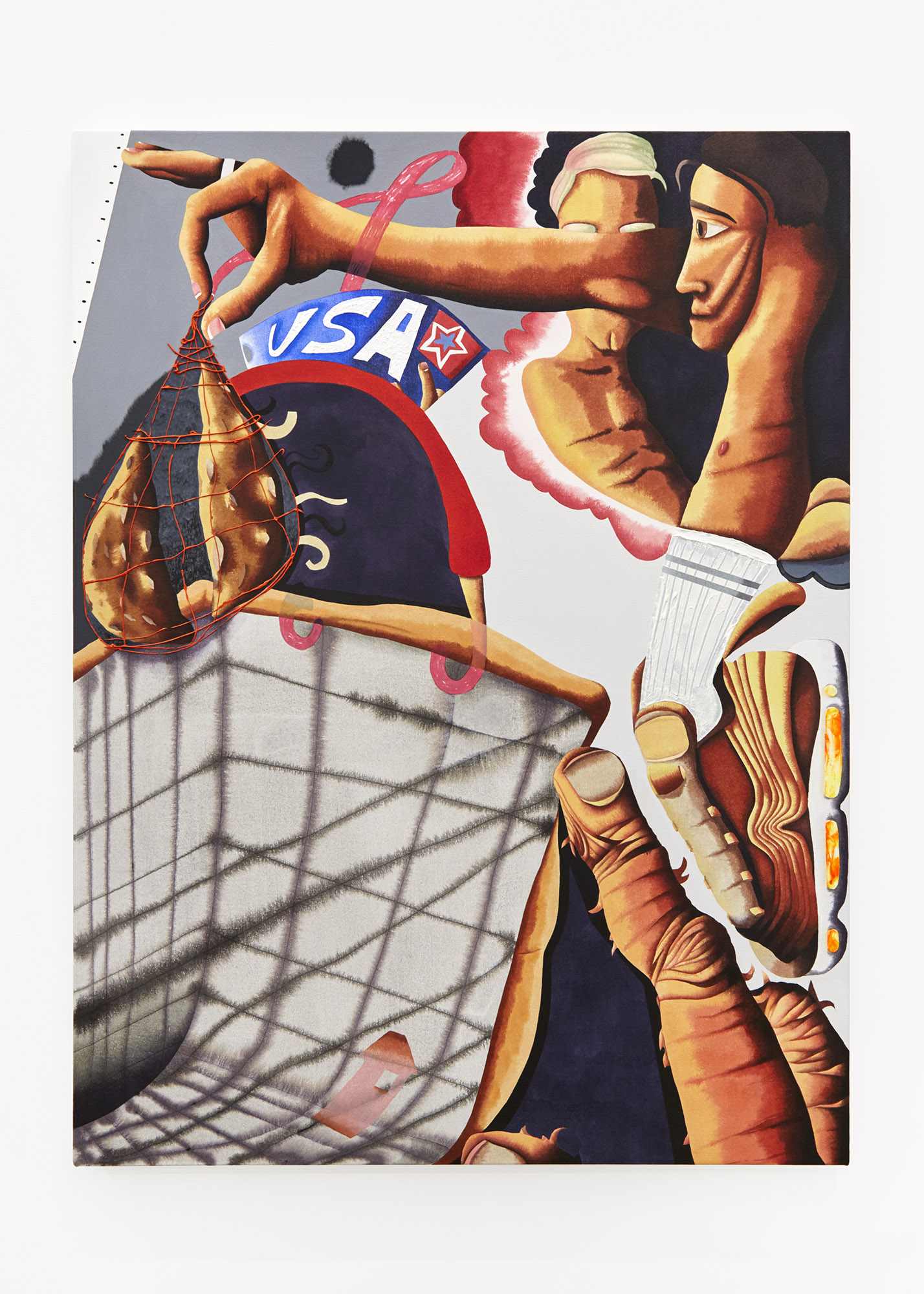 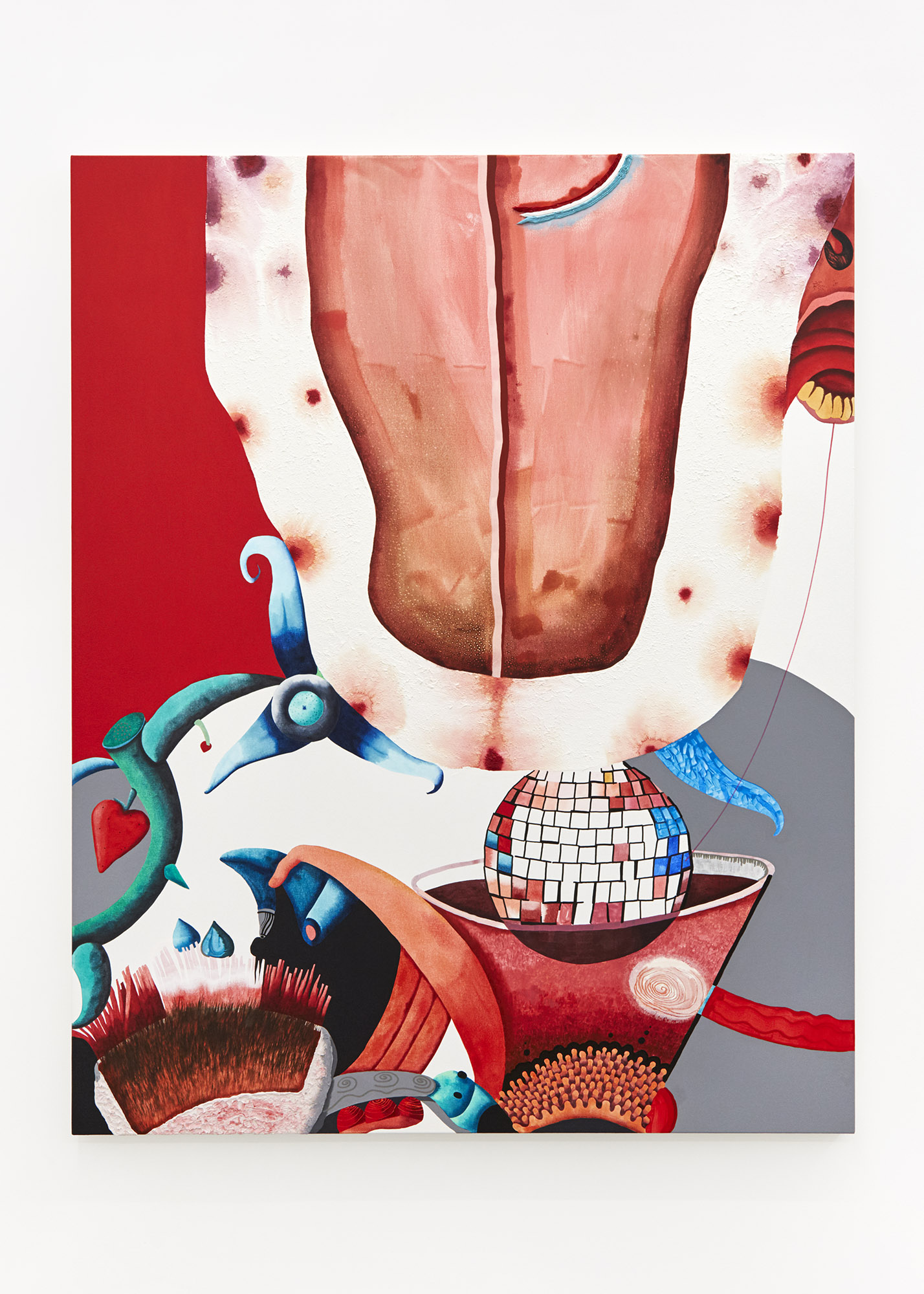 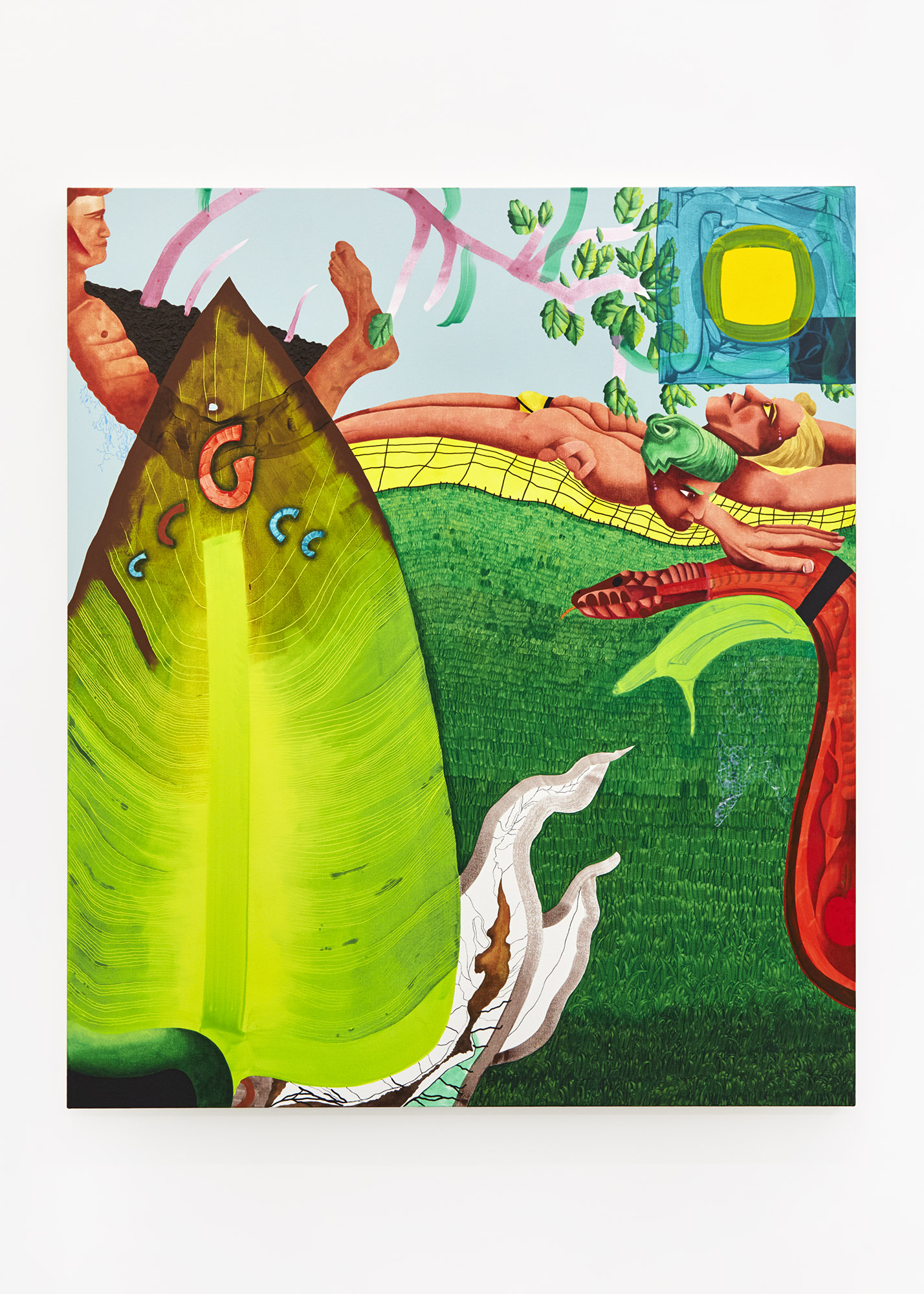 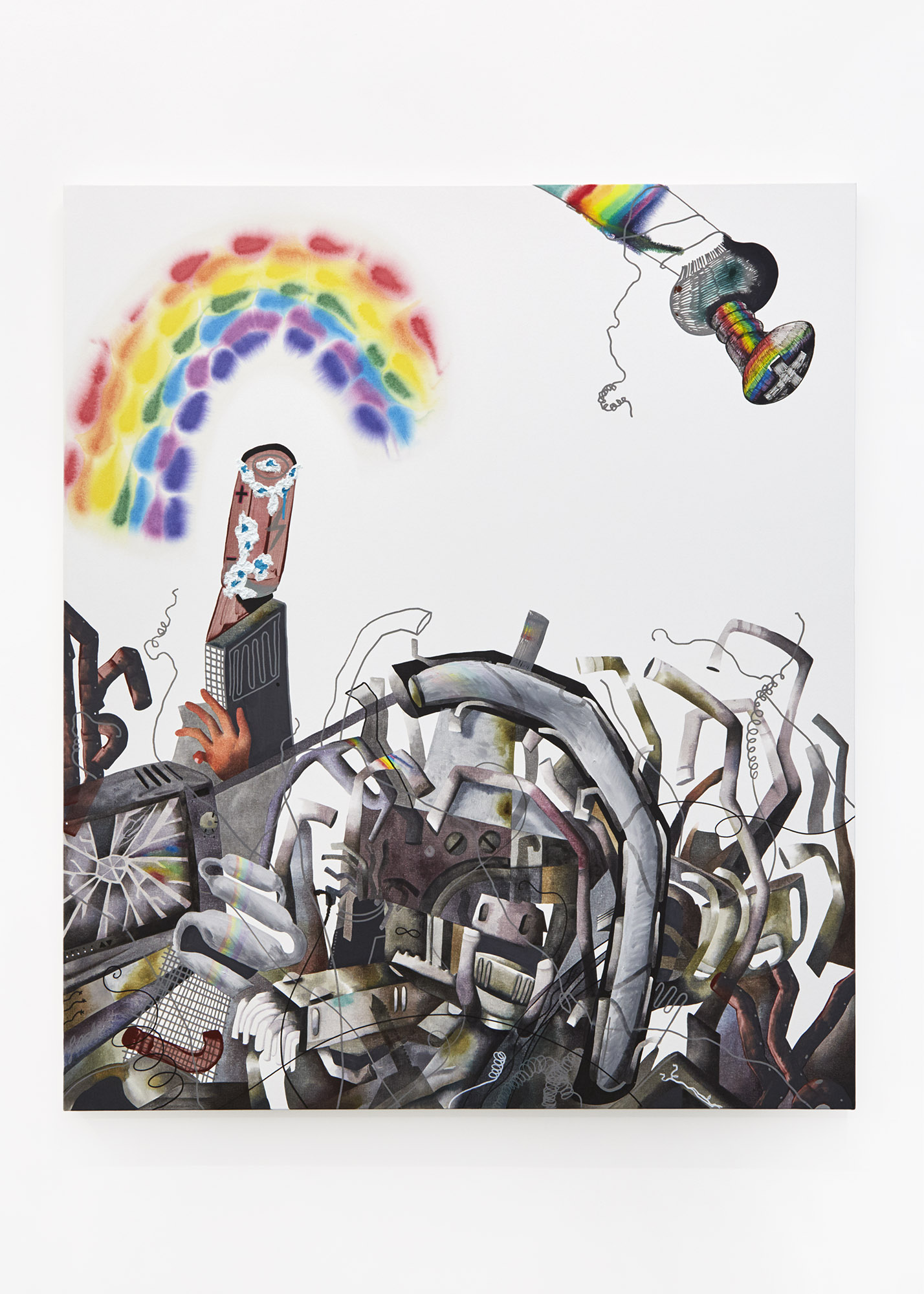 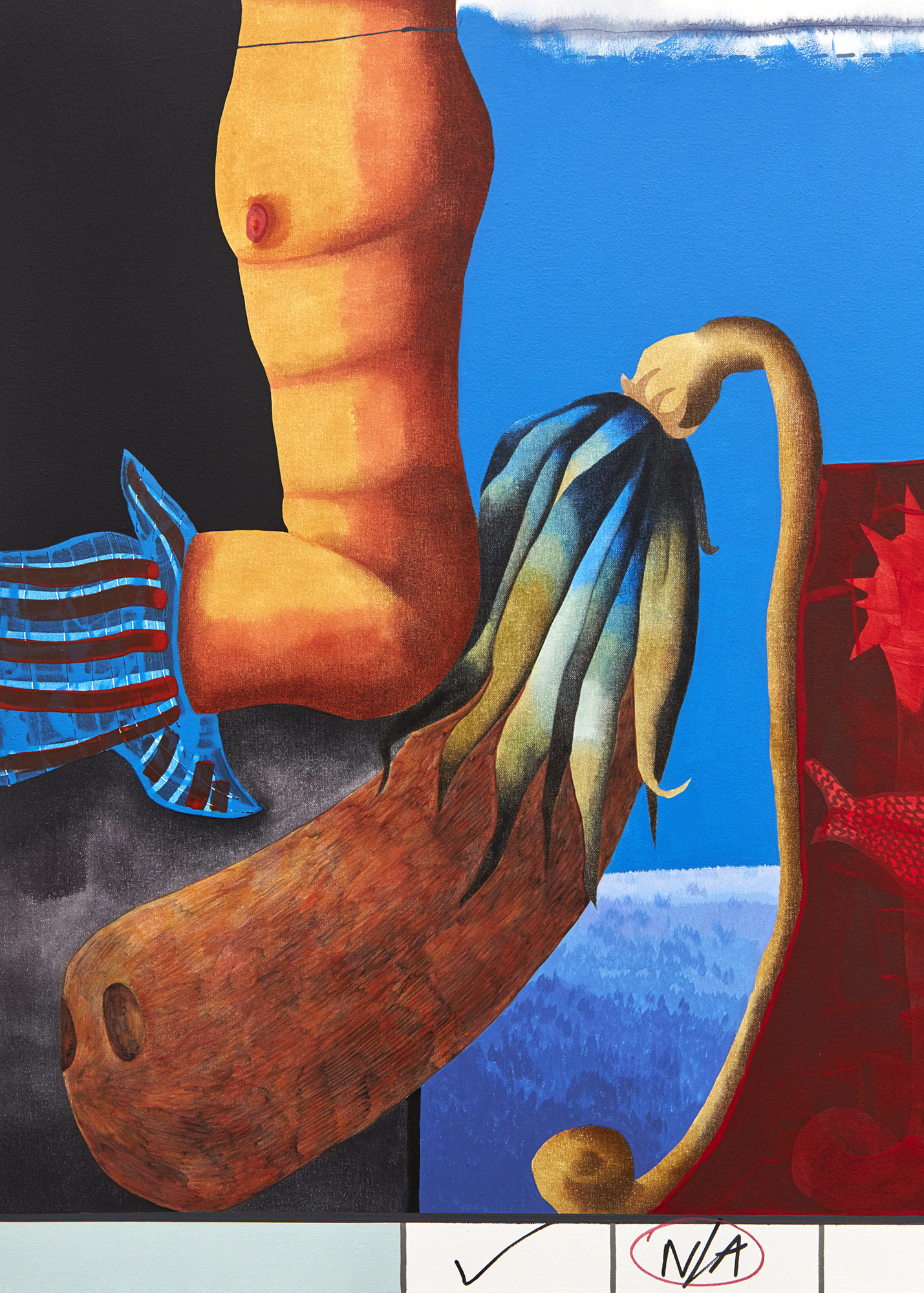 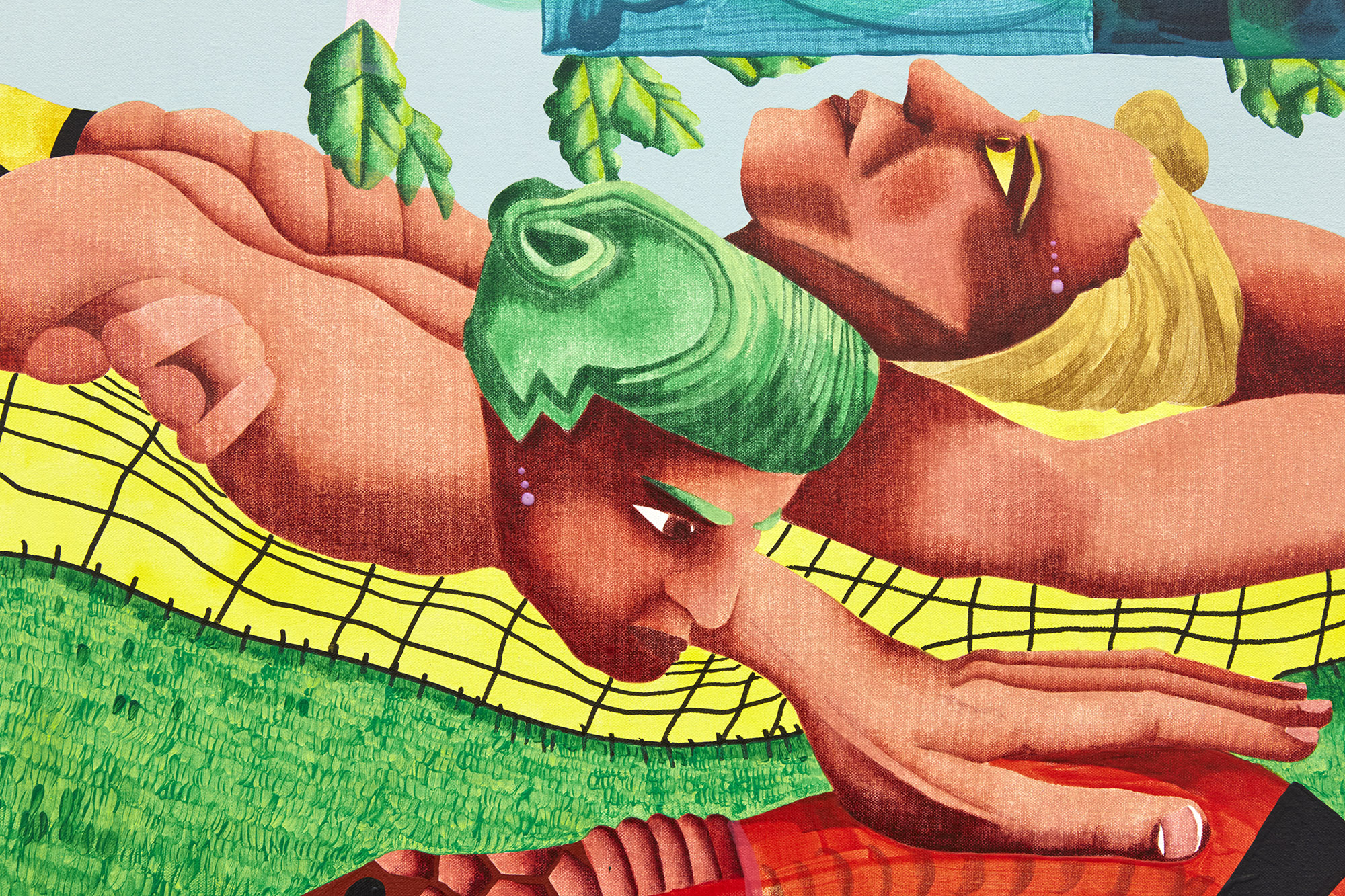 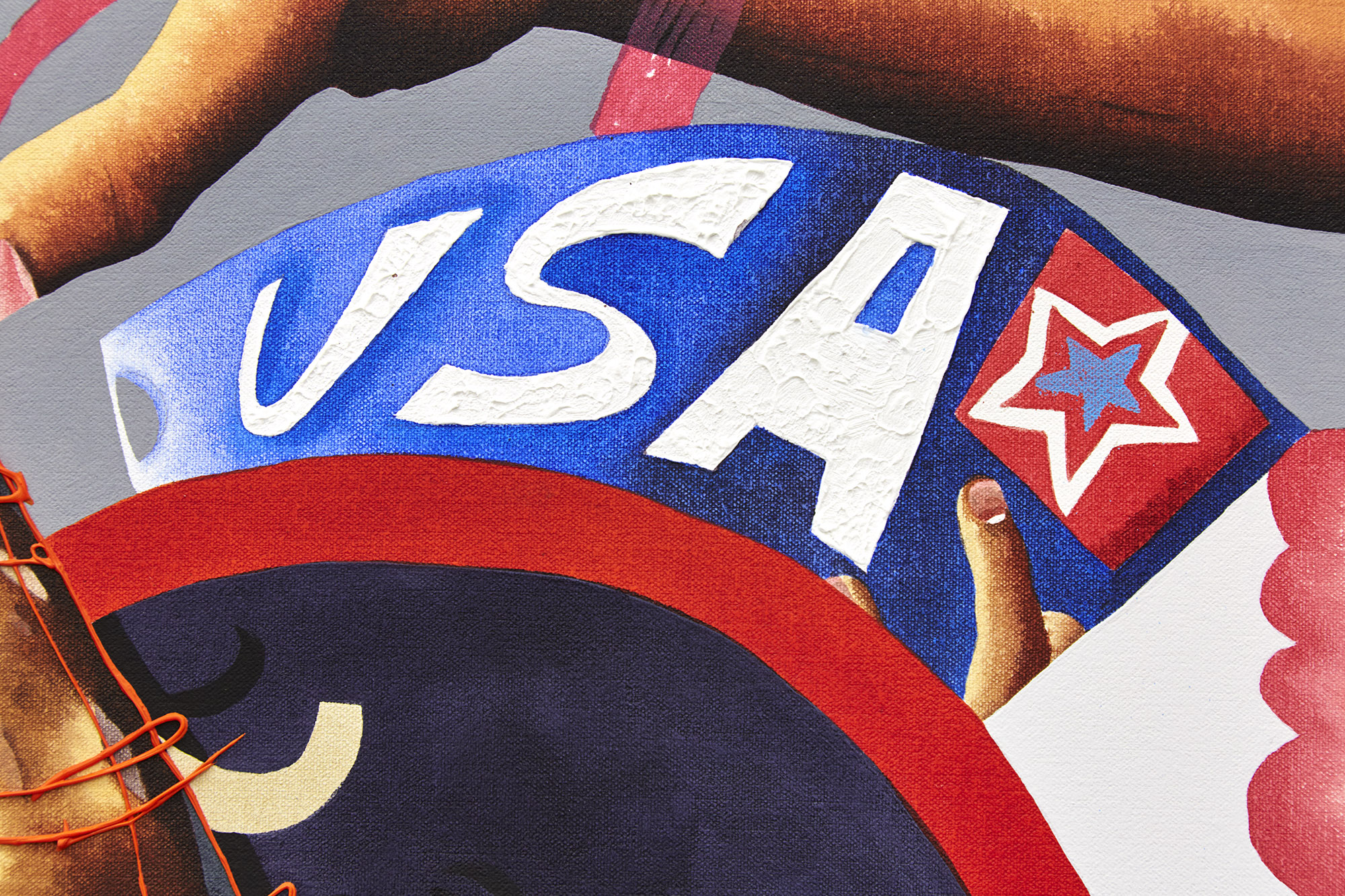 Shopping (detail)
Tom Worsfold starts painting without a plan, allowing objects to coalesce on canvas and conjuring range of possible worlds, memories and references. This text was written using a similar method.

Tom Worsfold’s paintings can be full or empty, quiet or loud. The canvas is either a figurative container for abstract ideas, or an abstract vessel for figurative schemes. There are baskets, bags, bodies being used as bags and forms being unzipped like bags. If this is sculpture as painting, the sculptures here are receiving an endoscopy.

In Worsfold’s paintings, complexity and simplicity occur in equal measure. Large objects, such as leaves and tongues slide into space and obstruct our view, whilst the innards of a snake are revealed in a graphic cross-section. We have no choice but to read it all simultaneously.

Olafur Elliason says that models are not representations of reality but that they are real. Models are activated by their users and no space is model free. The spaces within Worsfold’s paintings are full of physical, social and political models. They might be guides, archetypes and real.

A furry black line recalls Christopher Wool’s wirey spray paints. A blurred rainbow is all Morris Louis. Flat, sweaty pinks make me think of Phillip Guston. Worsfold’s paintings employ a range of motifs and references. This is not a checklist, a challenge or a role call. This is what paint has done and what painting can do.

Posterization is an effect in Photoshop. The continuous tonal gradation of an image is reduced to several areas of fewer tones, with abrupt changes between tones. Photographic images can appear like graphic posters in a few clicks. In basketball, posterized is a slang term. An offensive player dunks over a defensive player with such ferocity or elegance that it warrants the moment being immortalised into a poster. In both cases, images are made.

There’s a velocity to collage, an immediacy of legibility. The most obtuse objects come together with an economic, satisfying snap.  In Worsfold’s paintings, this process decelerates. Objects and forms converse, rather than collide. In screen-printing, the snap is the often-minute space between a screen and a surface. Many will only witness Worsfold’s paintings on or through a digital screen. For many, the snap will be more than a few millimetres.

A zip temporarily connects two fabrics, a hem prevents them unravelling and a seam is a line that shows they are joined.

A zip file compresses information into a single file, so that it occupies less space. Zip files require unlocking to reveal the contents.

Protruding in profile, bubbles in the soles of trainers are a seductive illusion. They speak of weightlessness, walking on air, supporting mass. A friend of mine once took a Stanley knife to a pair of Nike Air Maxes. The result was disappointing. The groggy exhale of reality.

A mirror ball, a rainbow and cracked television screen. Worsfold’s paintings speak of illusion, of optical architecture that surrounds us, seduces us and disappoints us.

For the artists of the Renaissance, painting figures exclusively in shades of grey evoked classical sculpture, a way of rendering three dimensions in two.

Pagan subjects were often painted in grisaille, distinguishing them from the religious in paintings. Grisaille thus allowed potentially subversive imagery to be simultaneously present and absent in paintings, part of a colourful, truthful, narrative, but distinct from it too.

Worsfold does not paint in grisaille, but the figures in his paintings are both there and not there. Sober sculptures in a hallucinatory space, or vice versa. Concrete recollections and real-time participants.

A recent Instagram post by Nigel Cooke highlighted the critical obsession with knowing when a painting is finished. He suggested that a more interesting question is: how do you know when it has started?