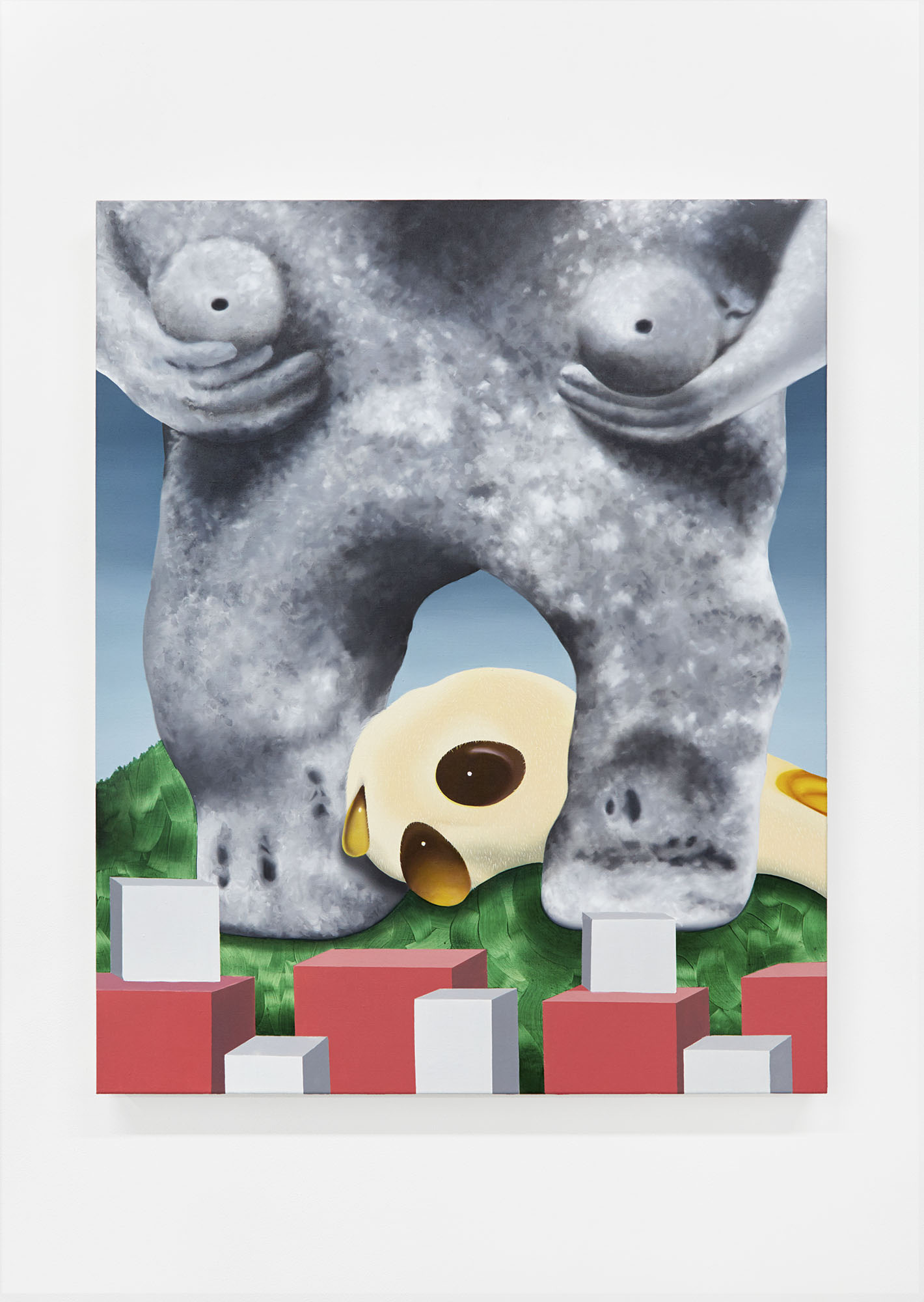 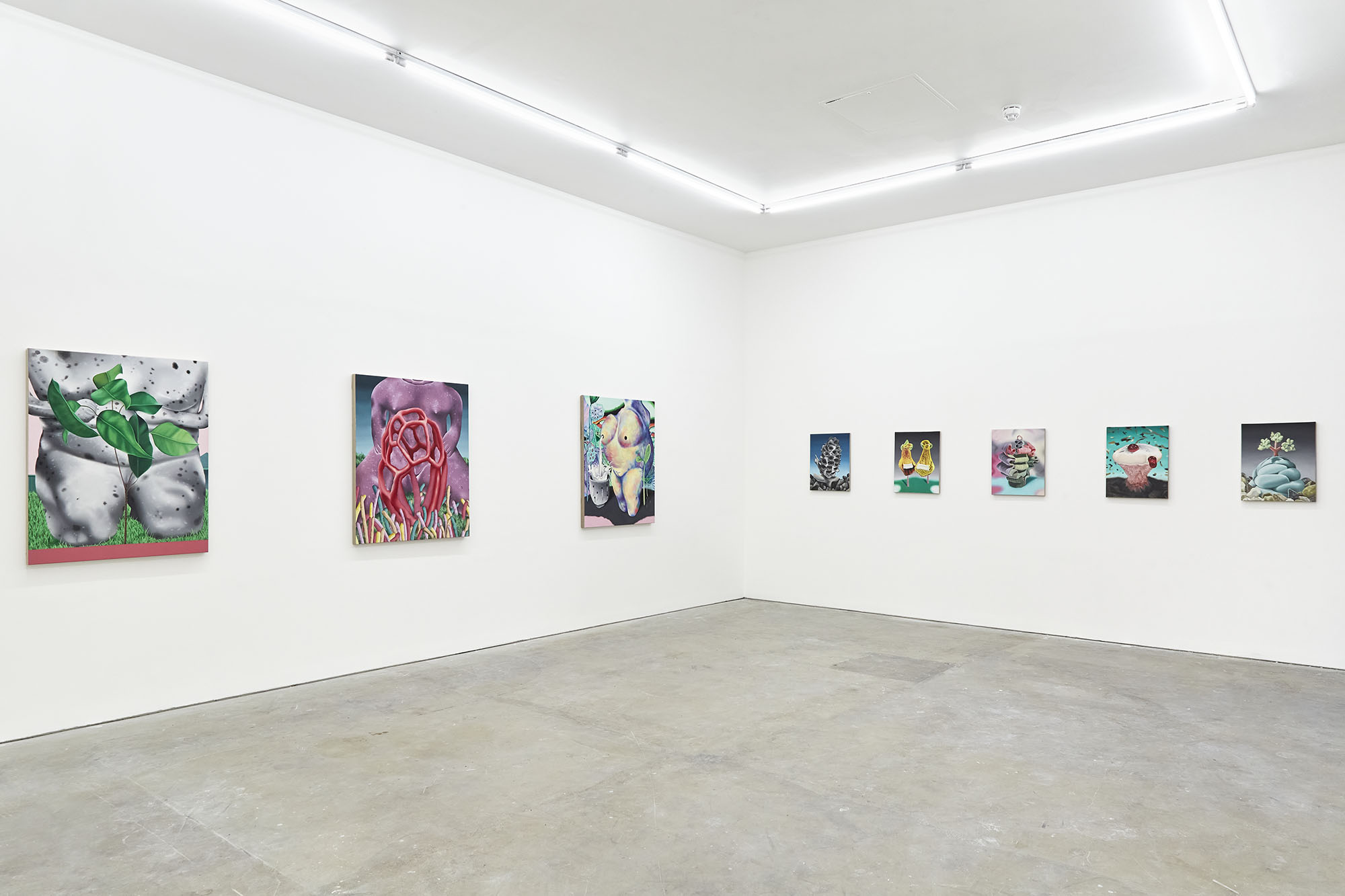 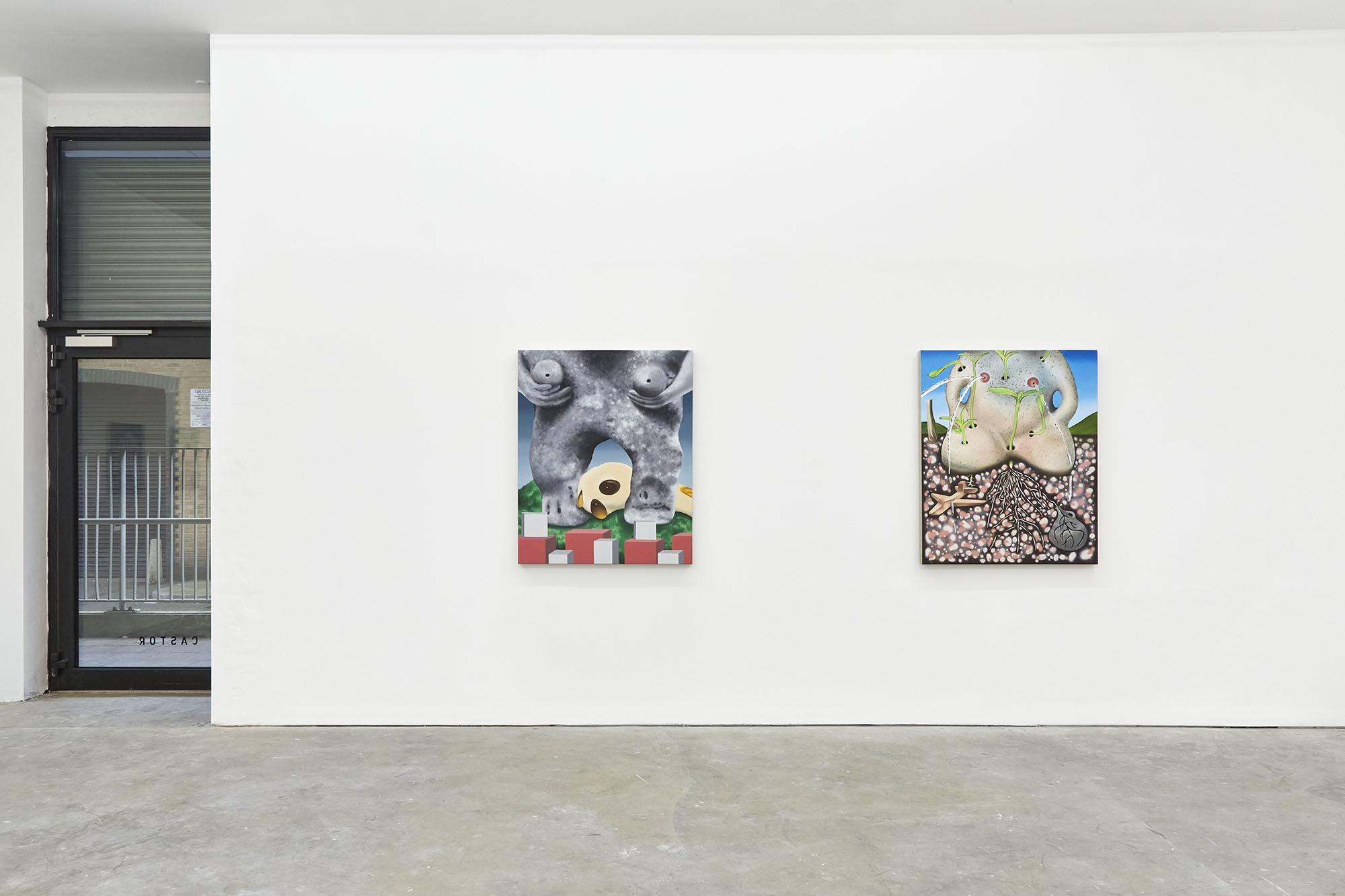 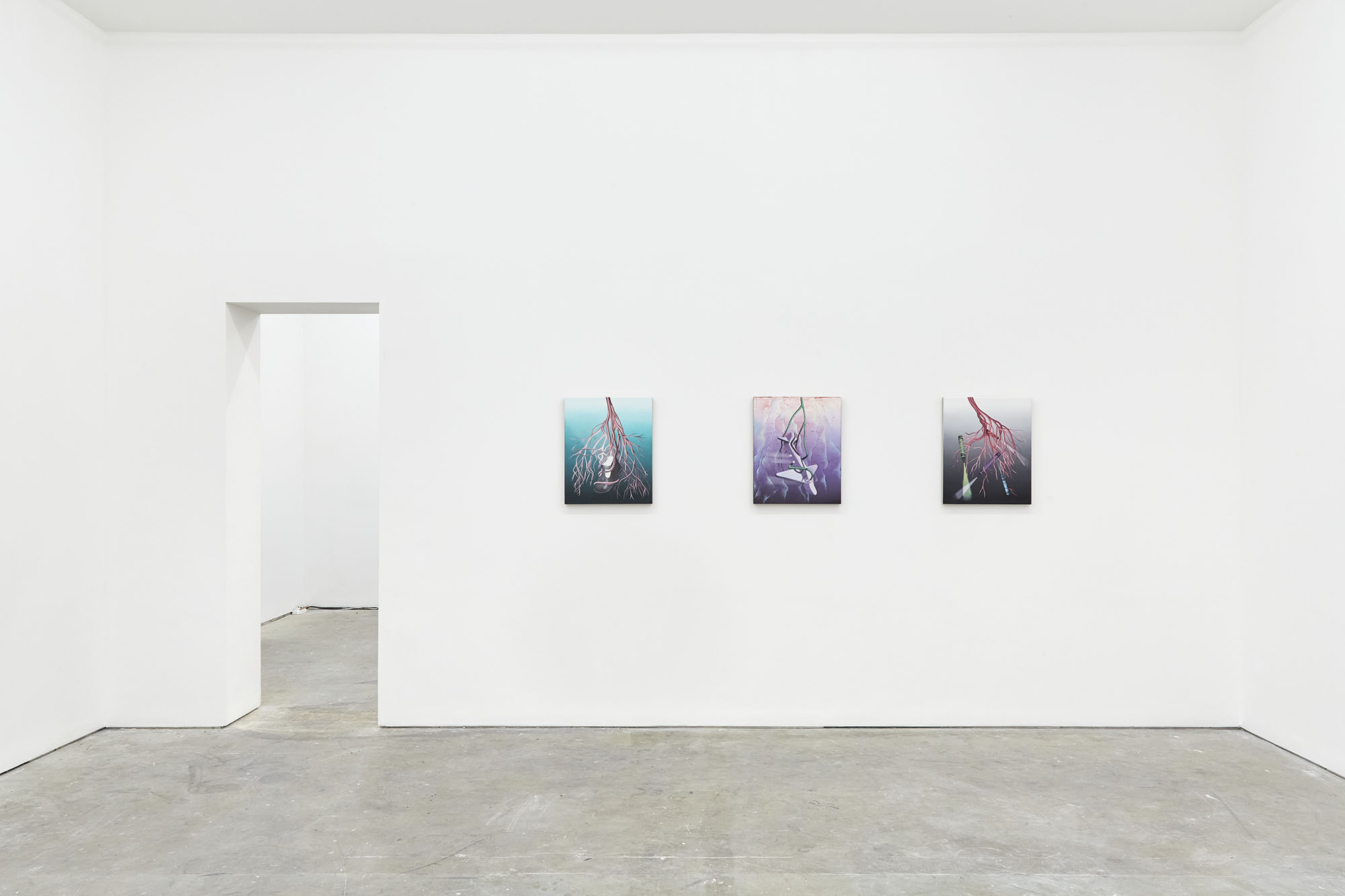 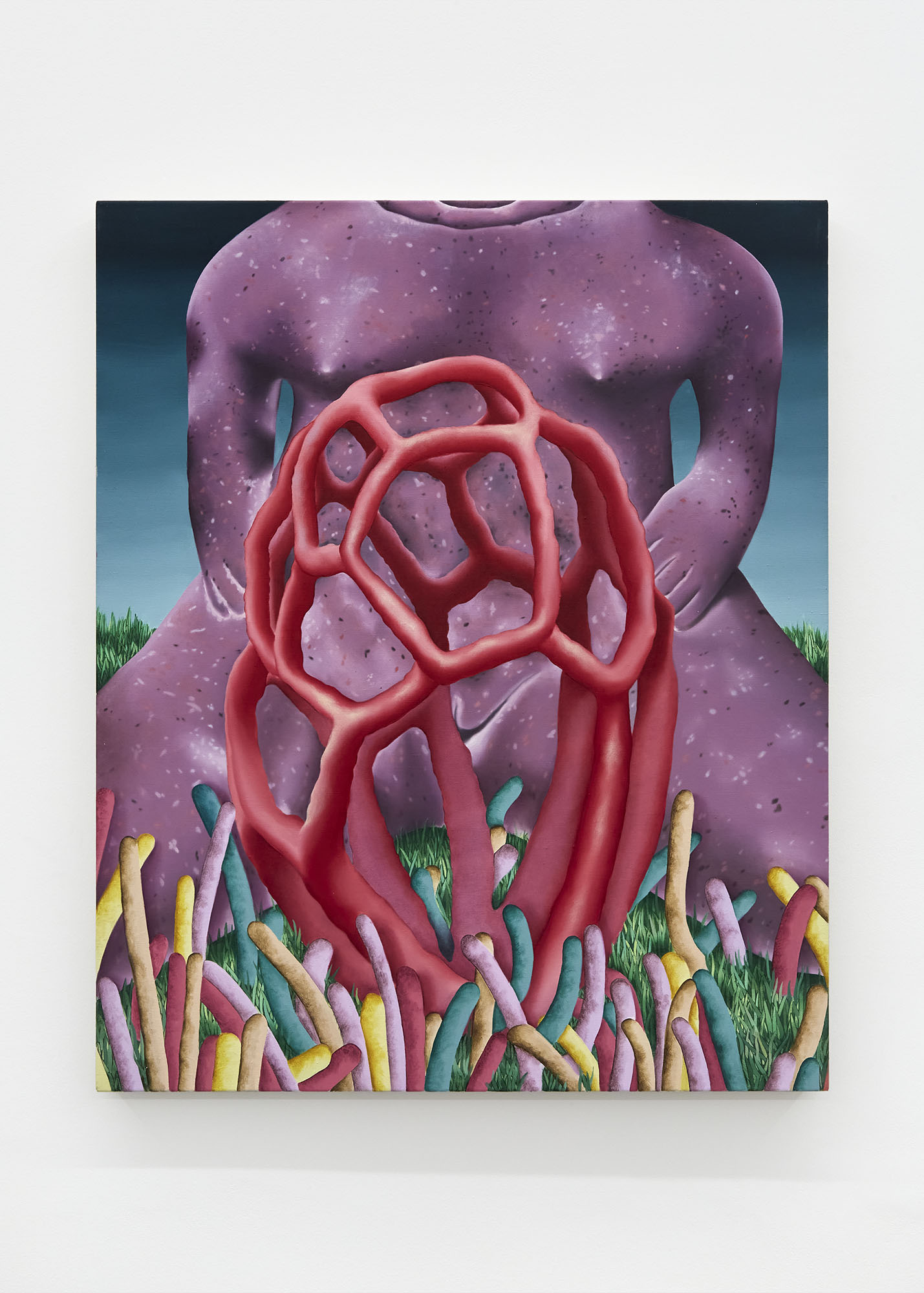 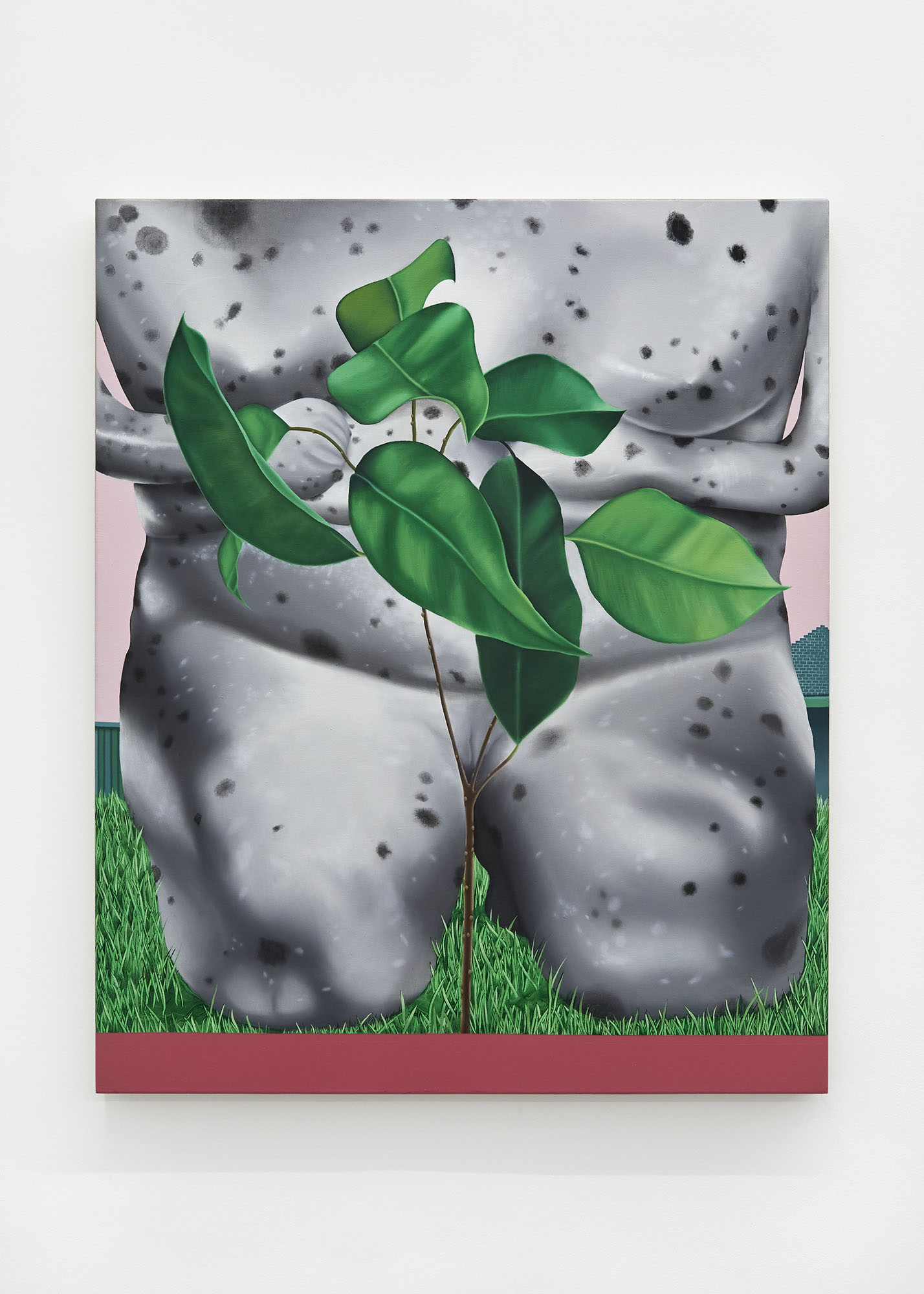 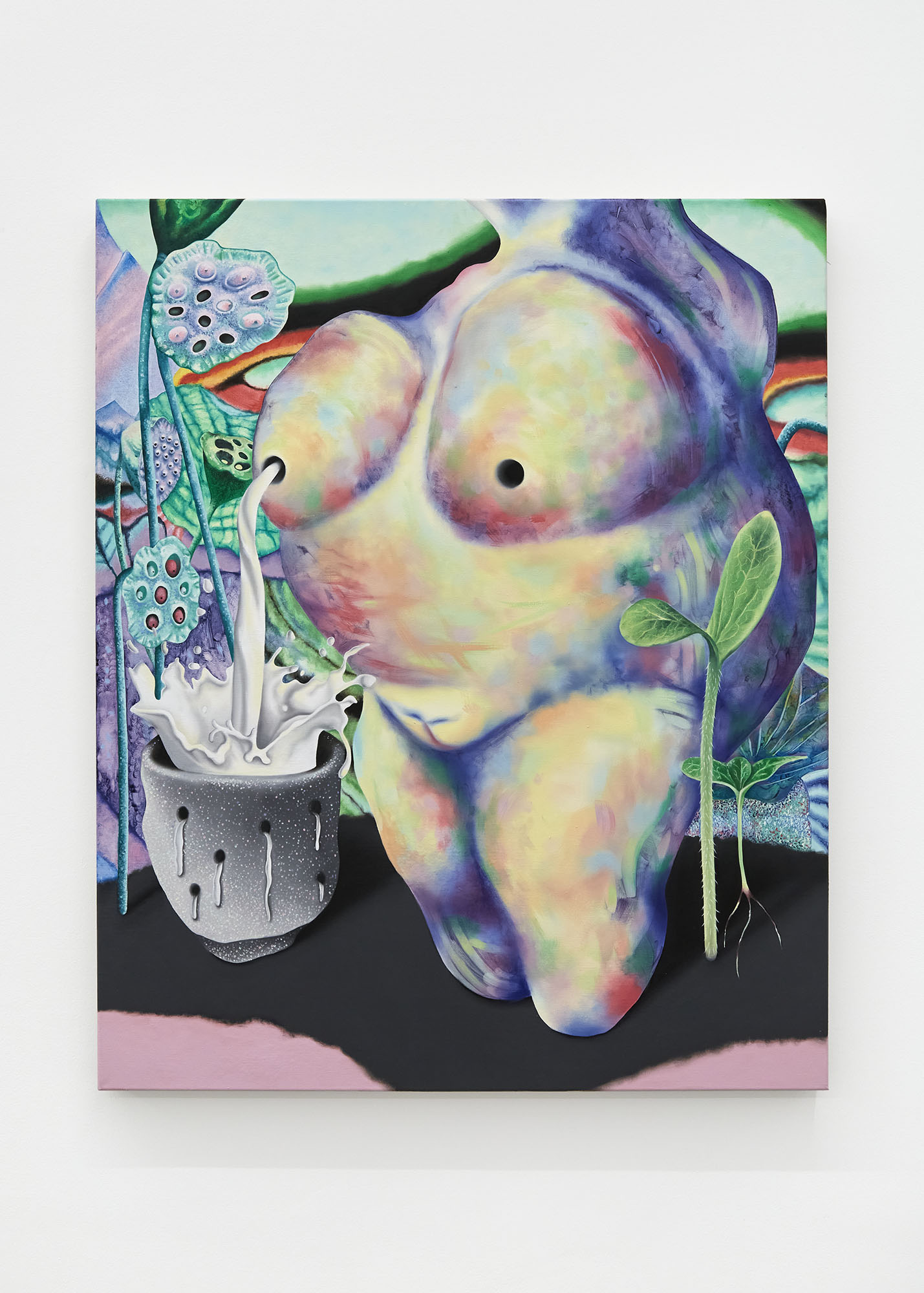 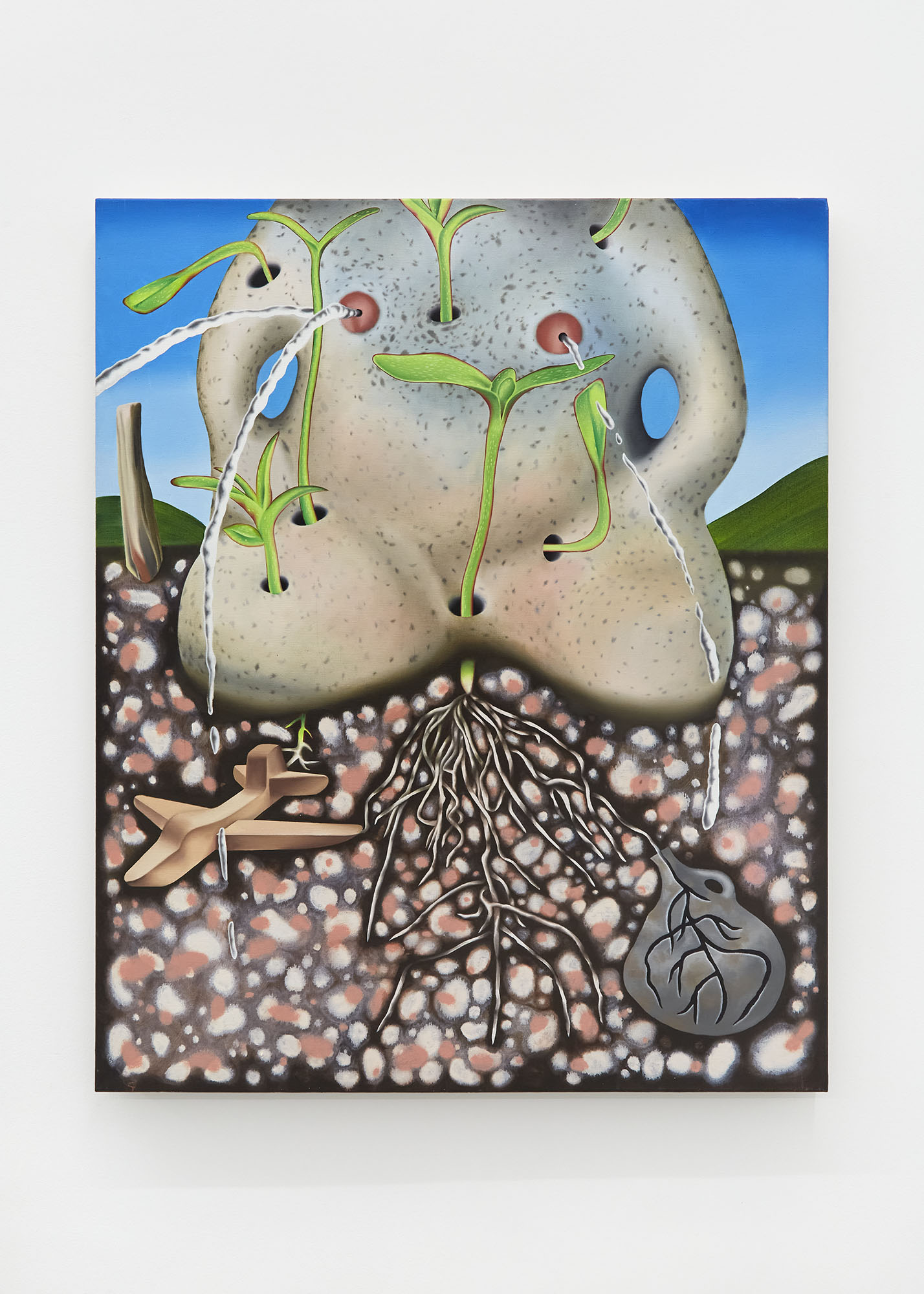 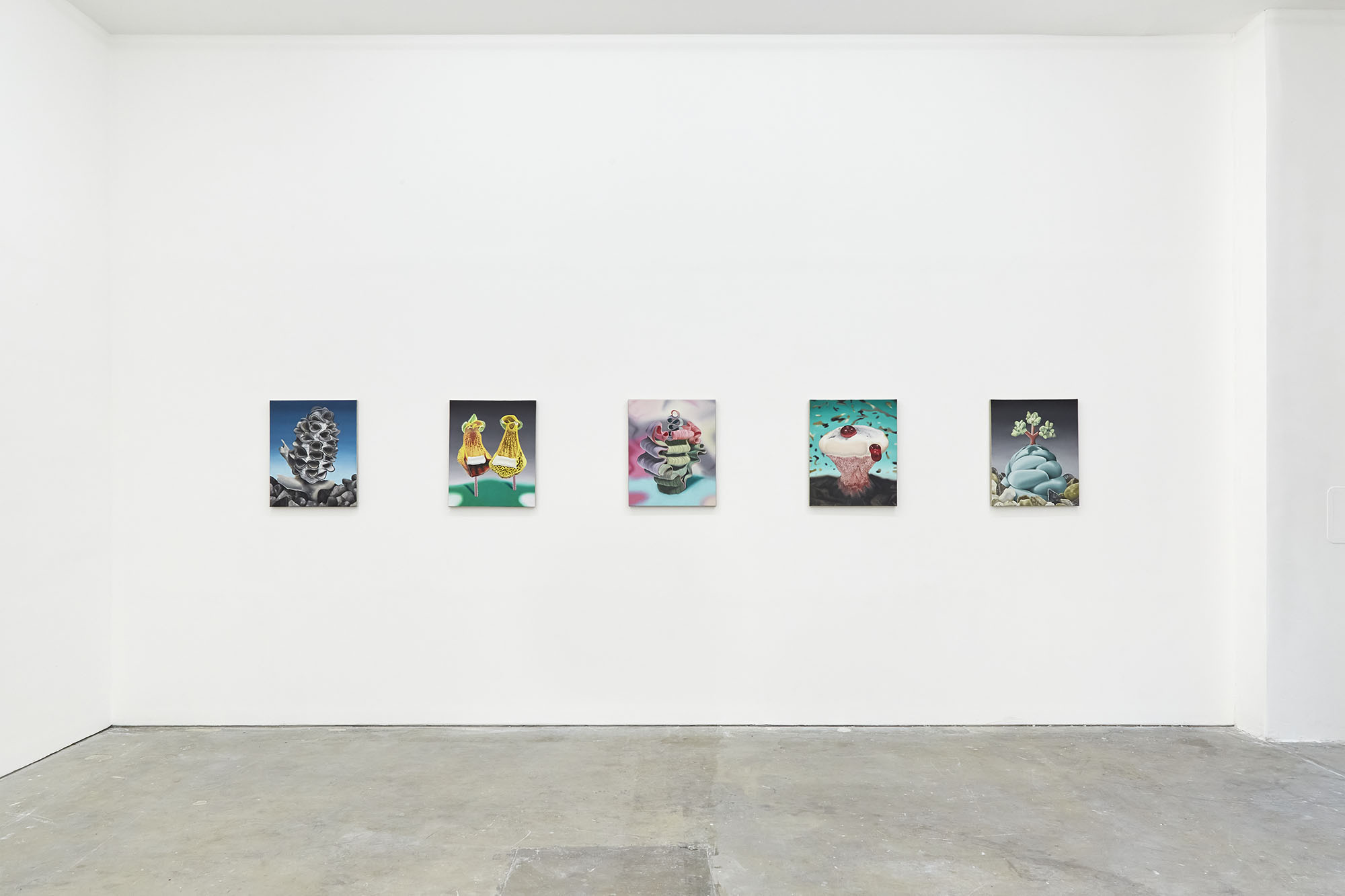 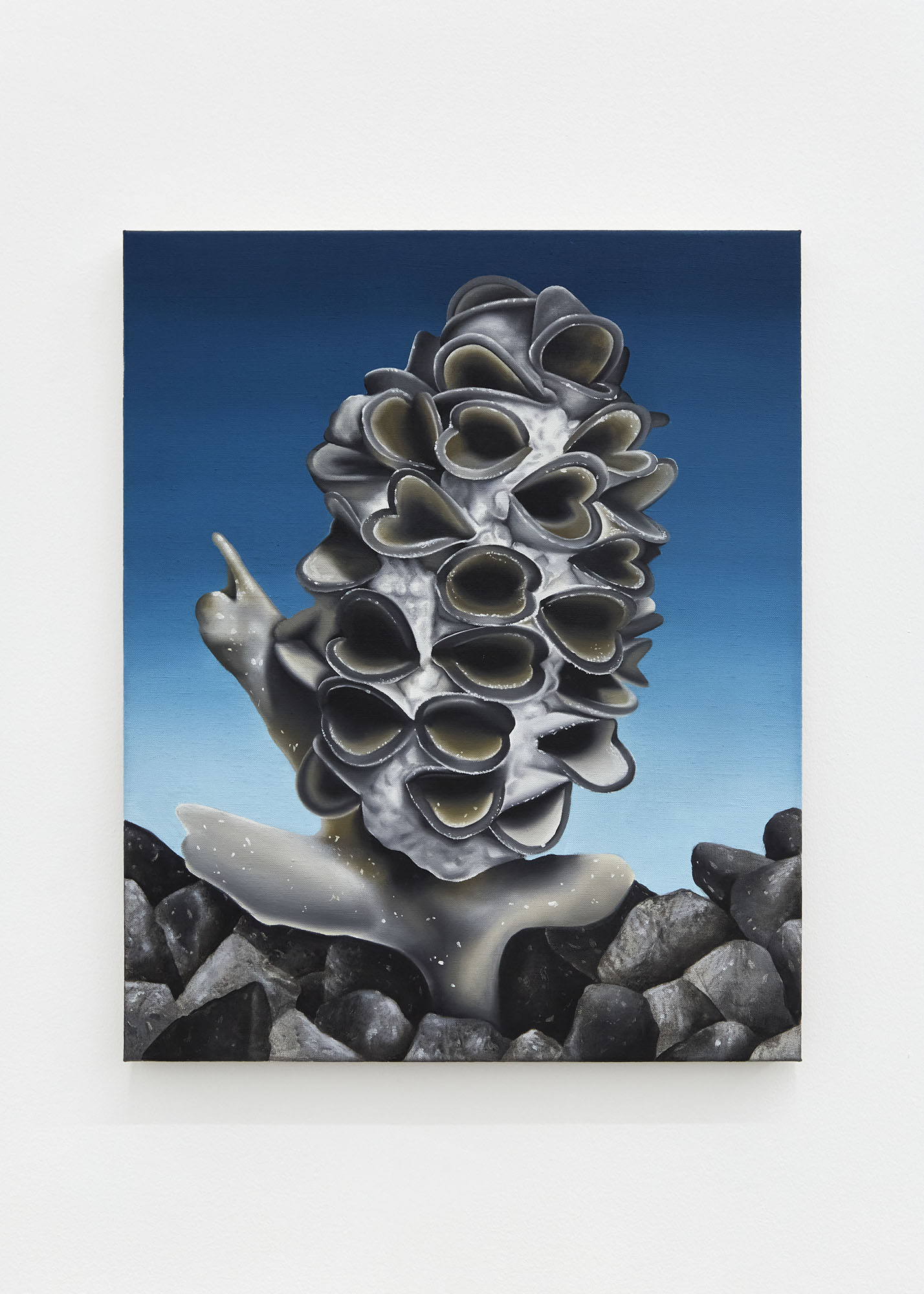 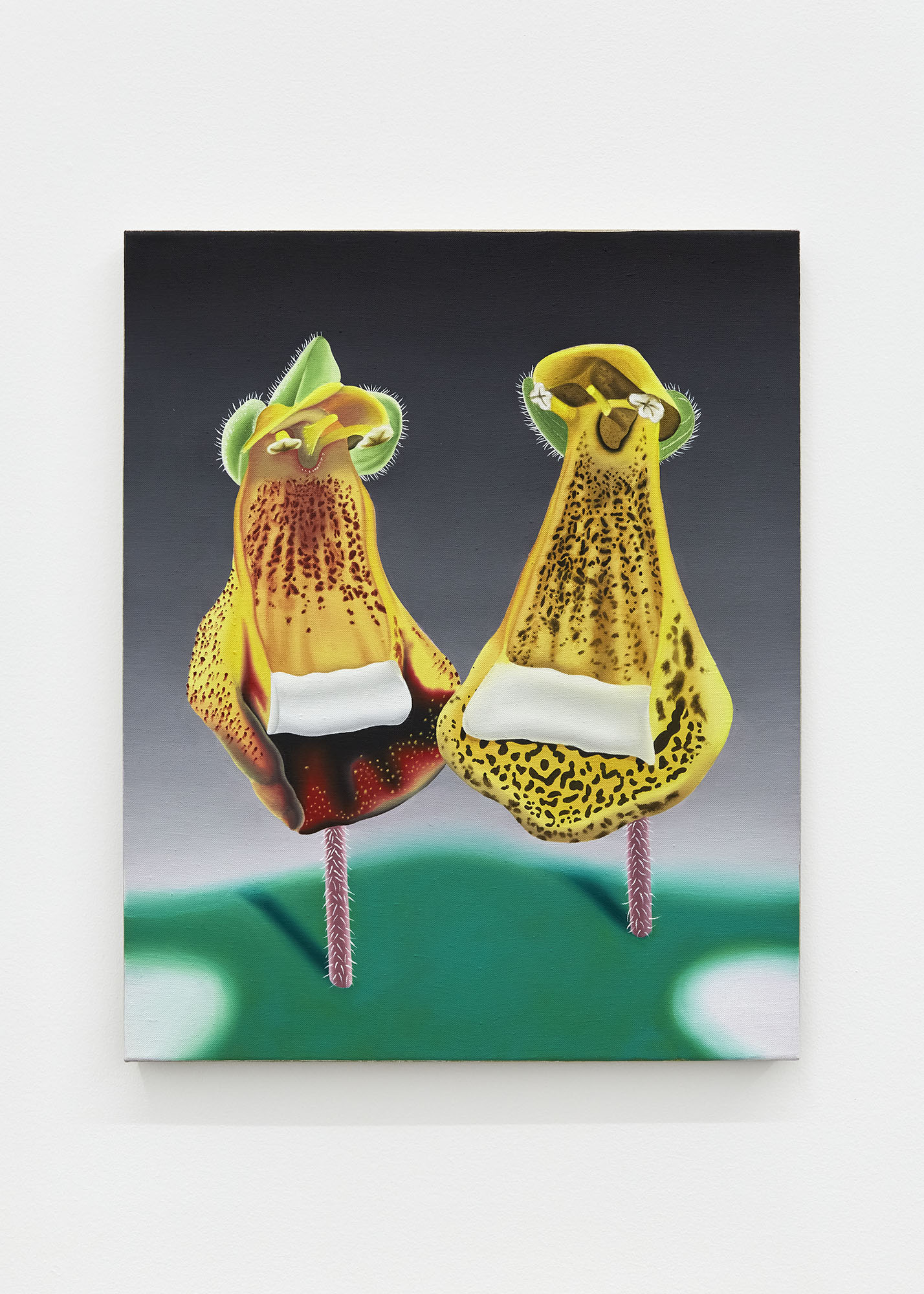 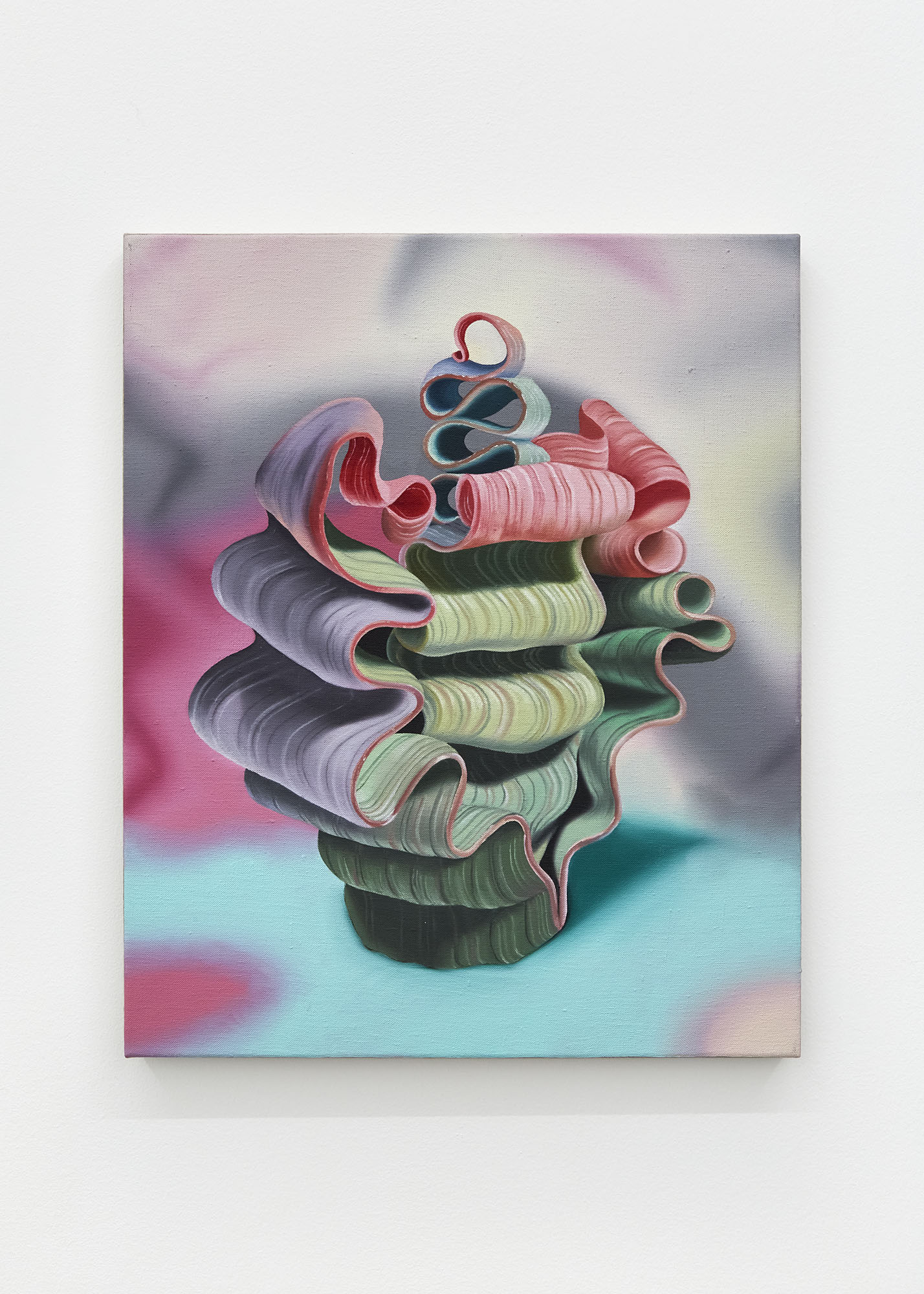 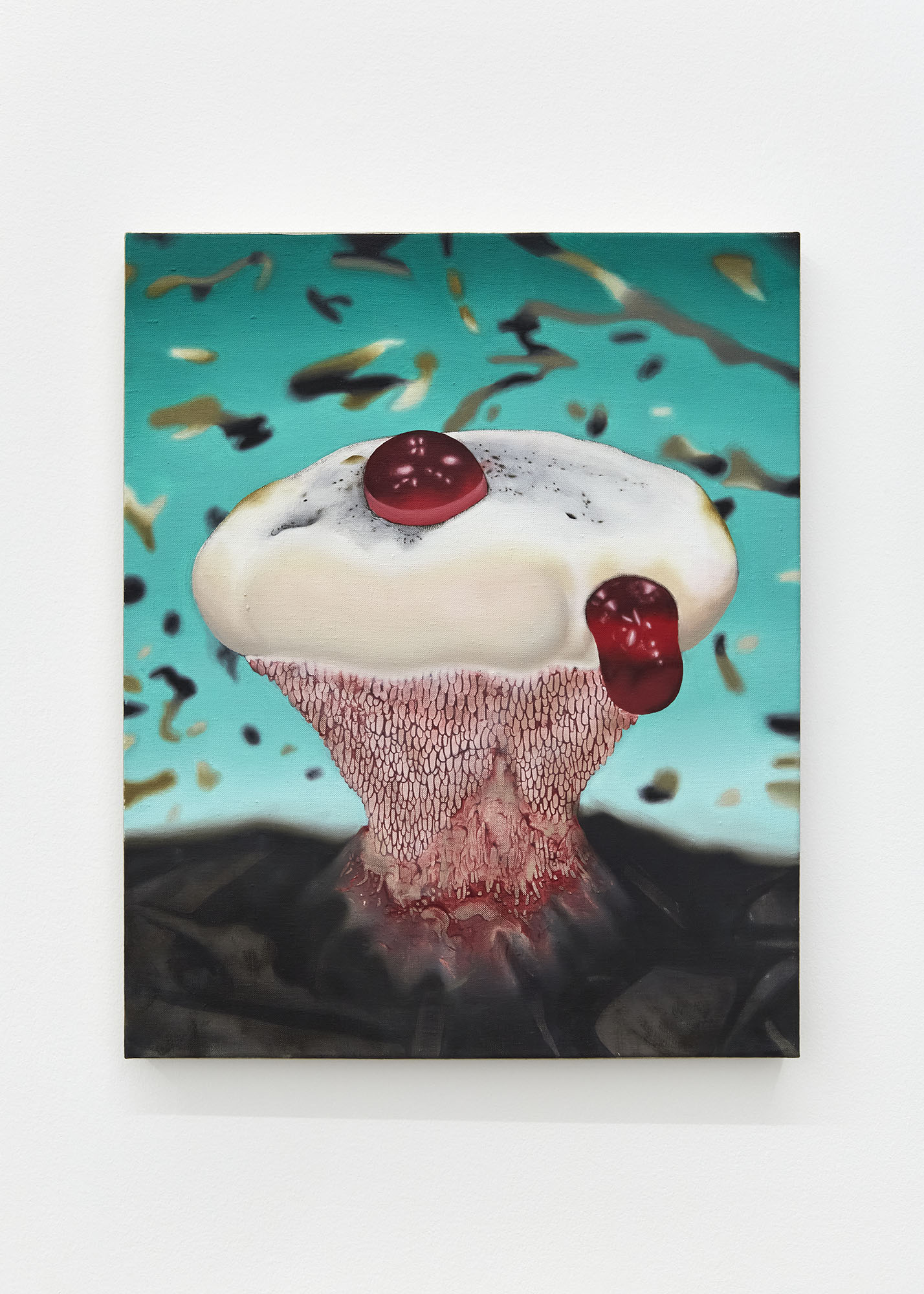 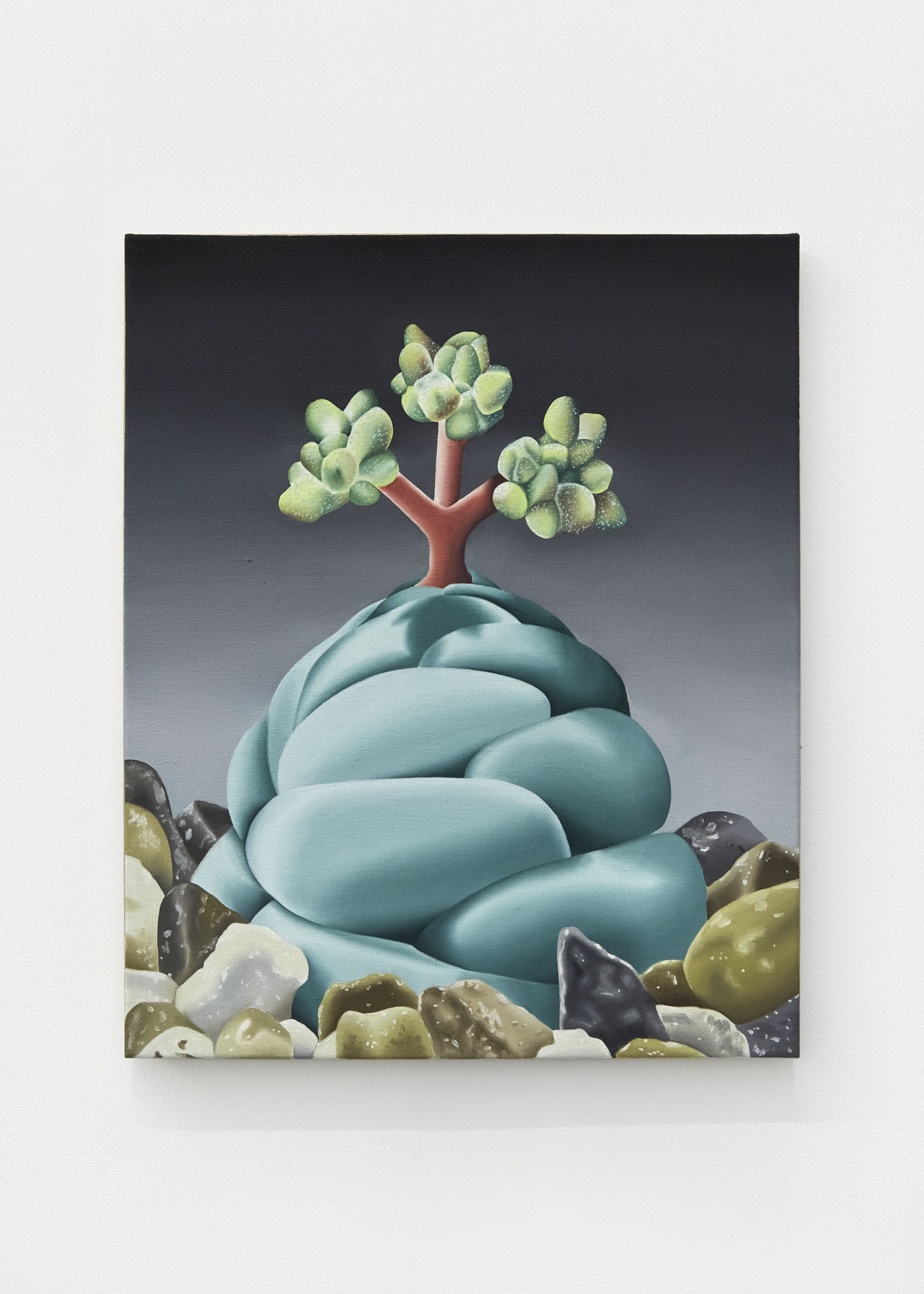 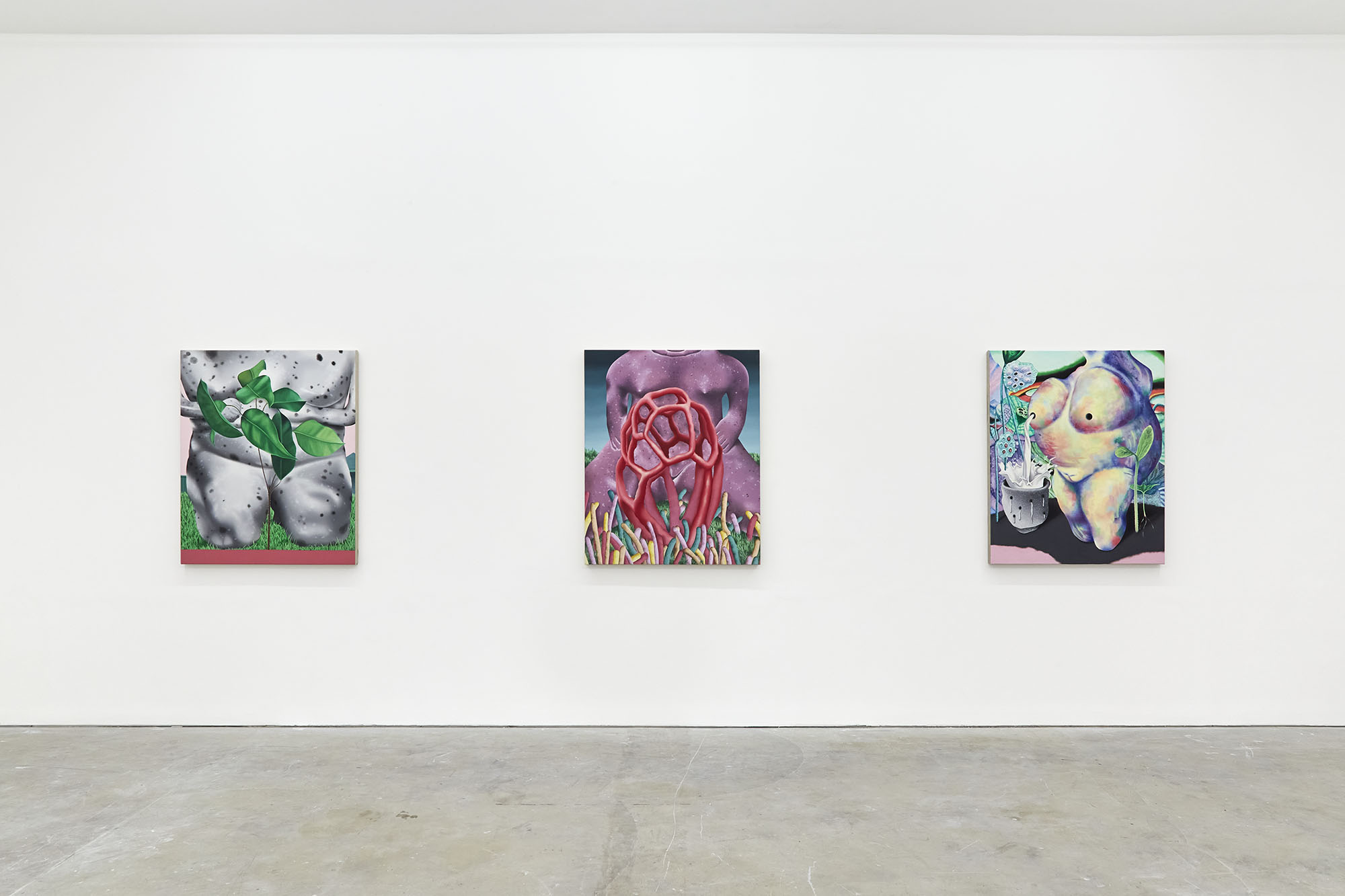 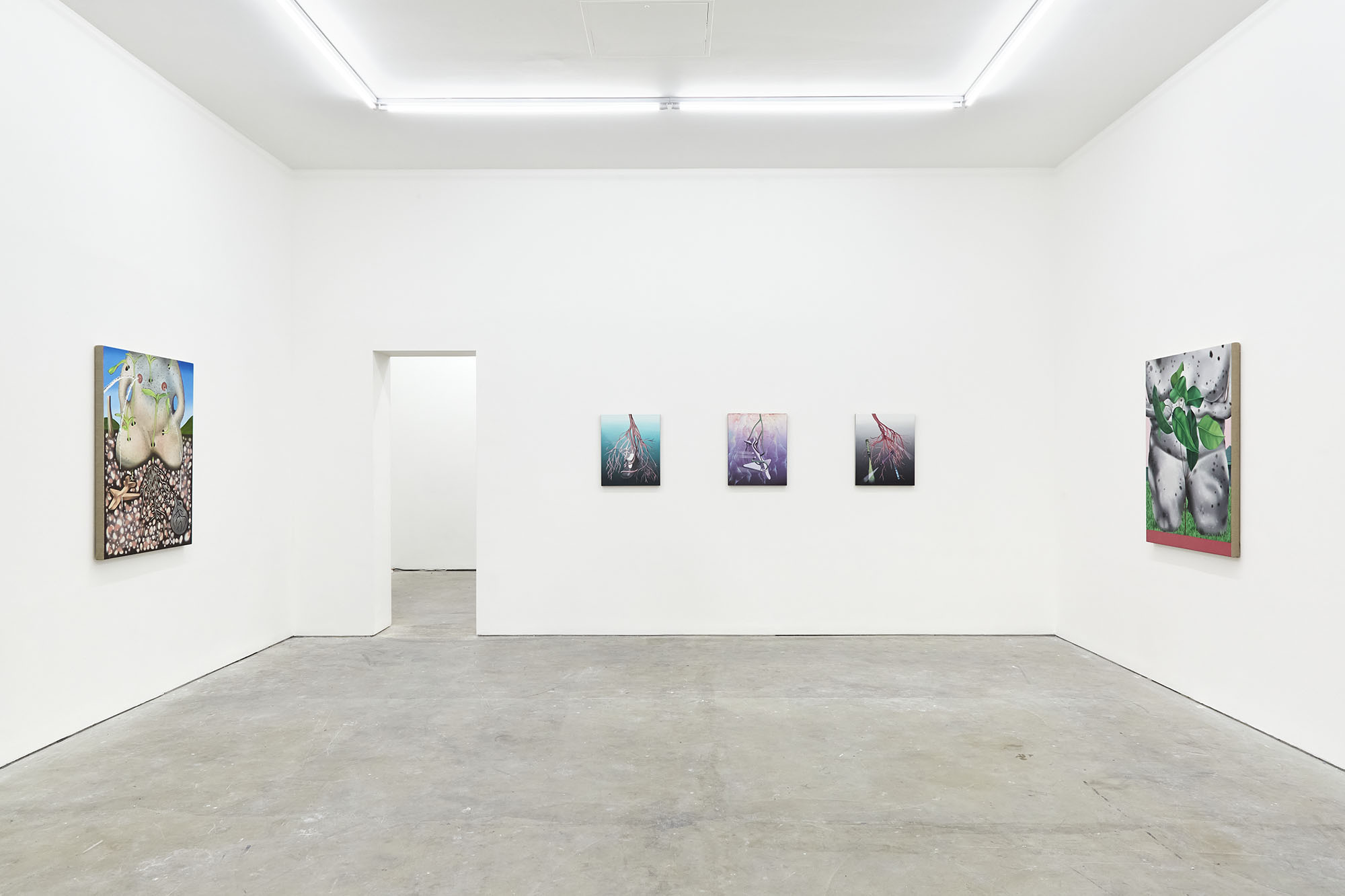 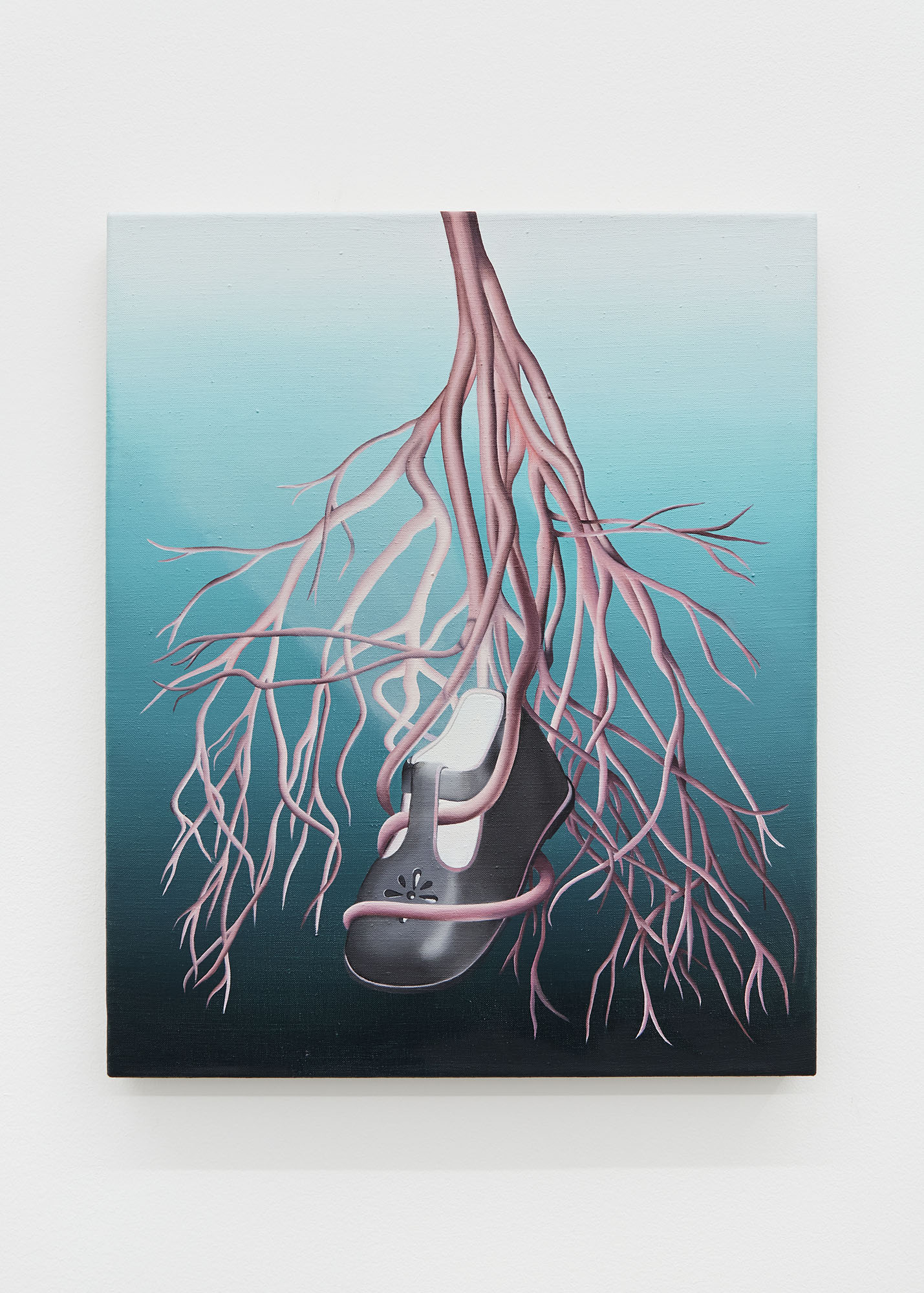 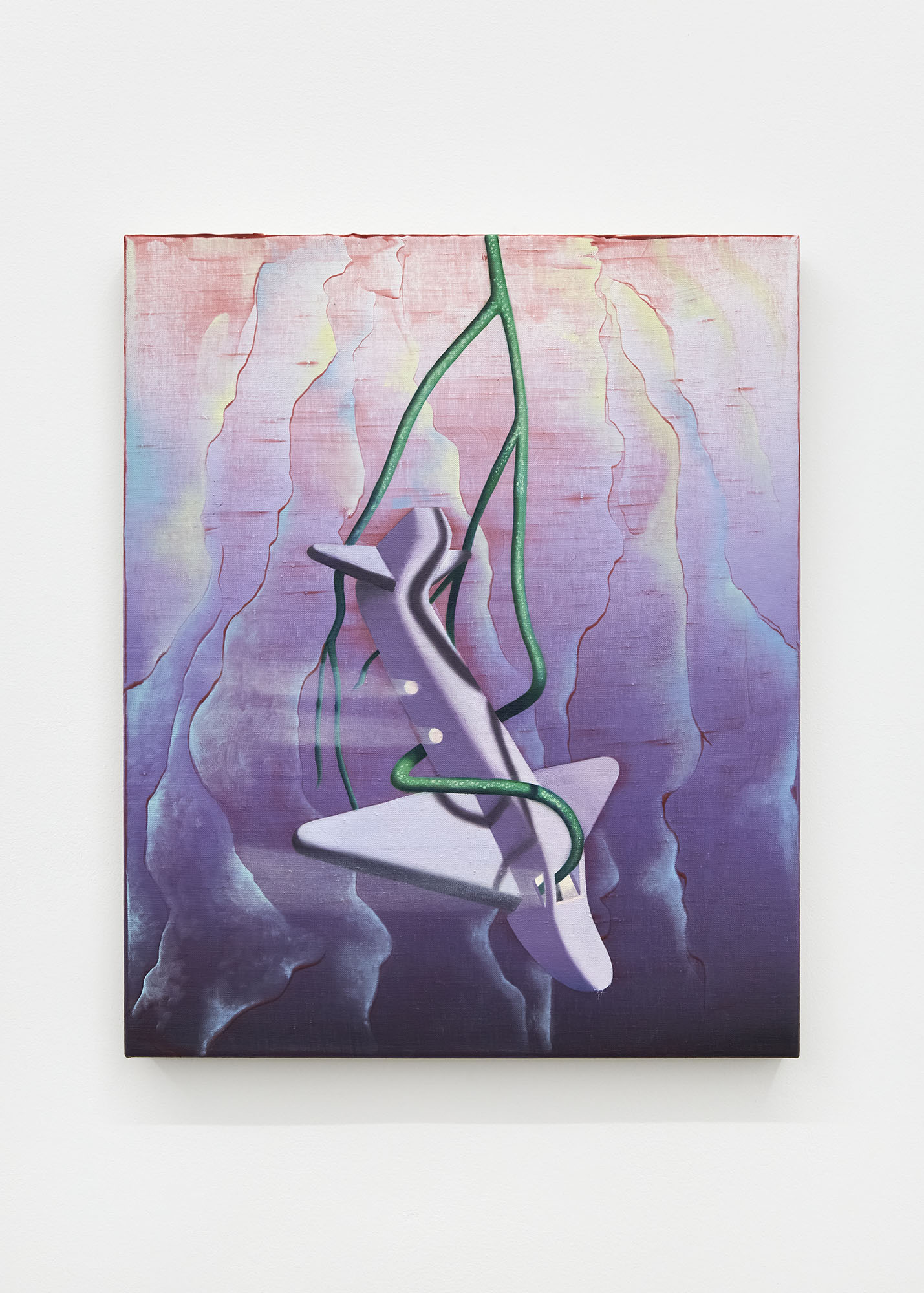 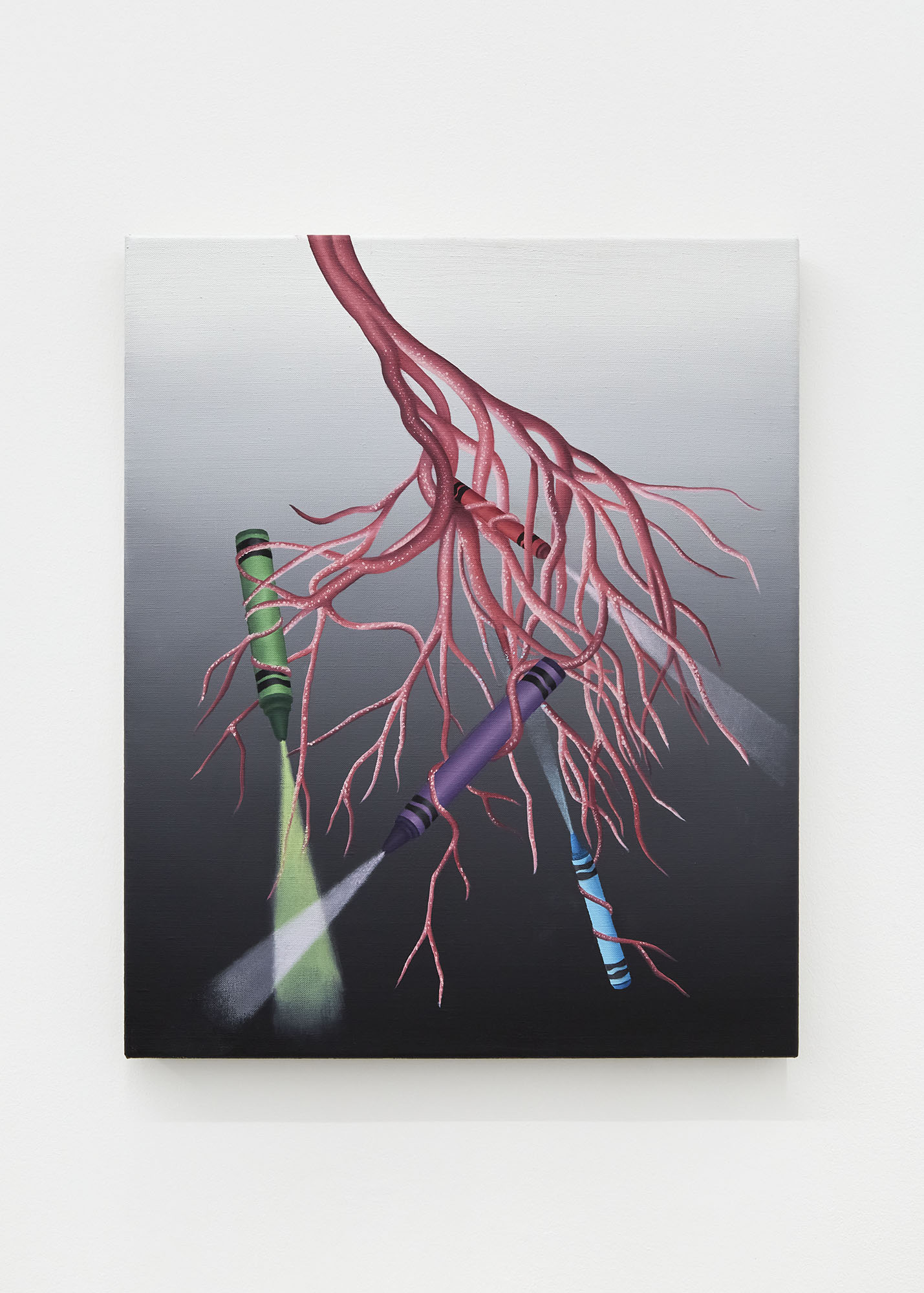 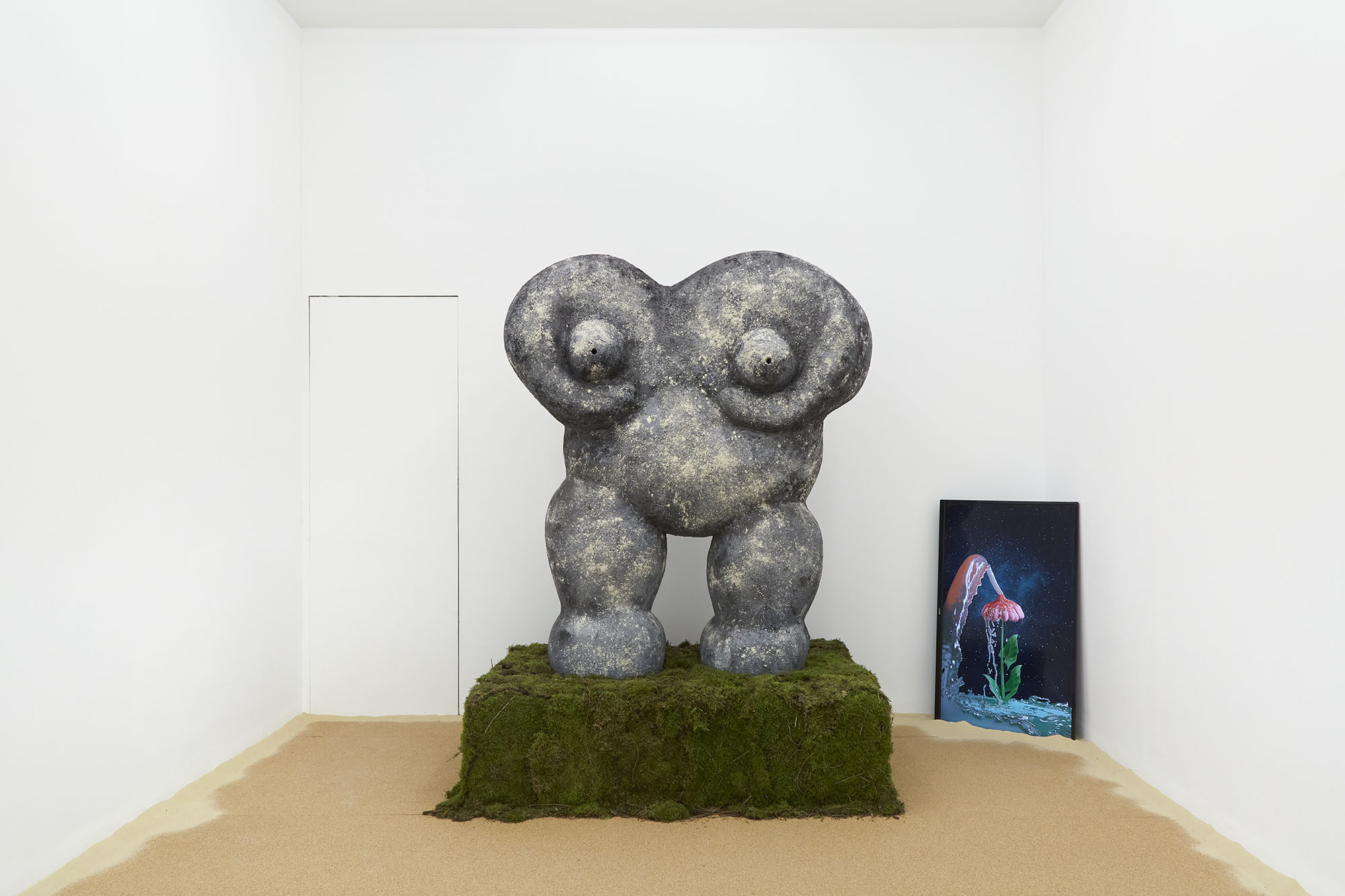 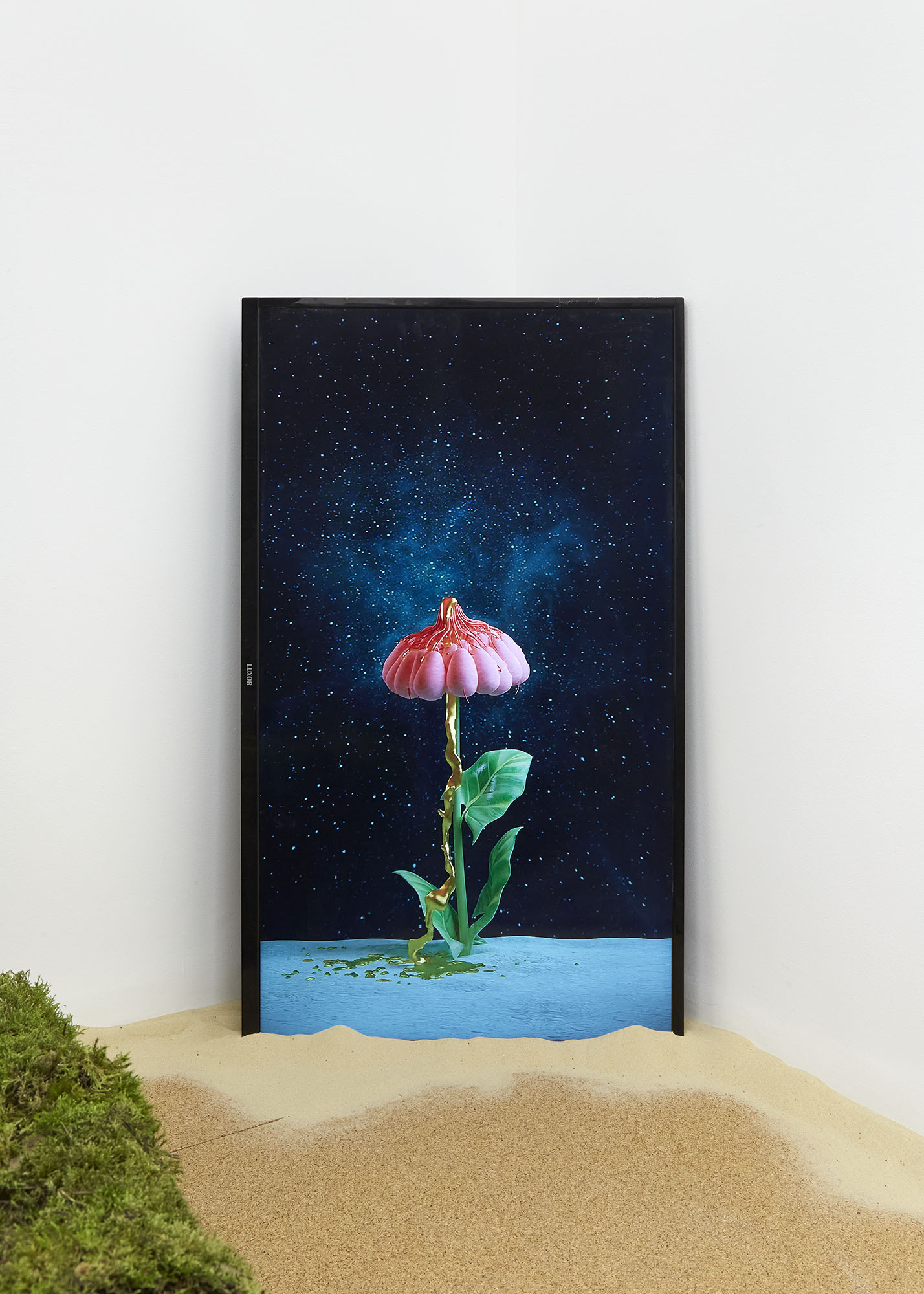 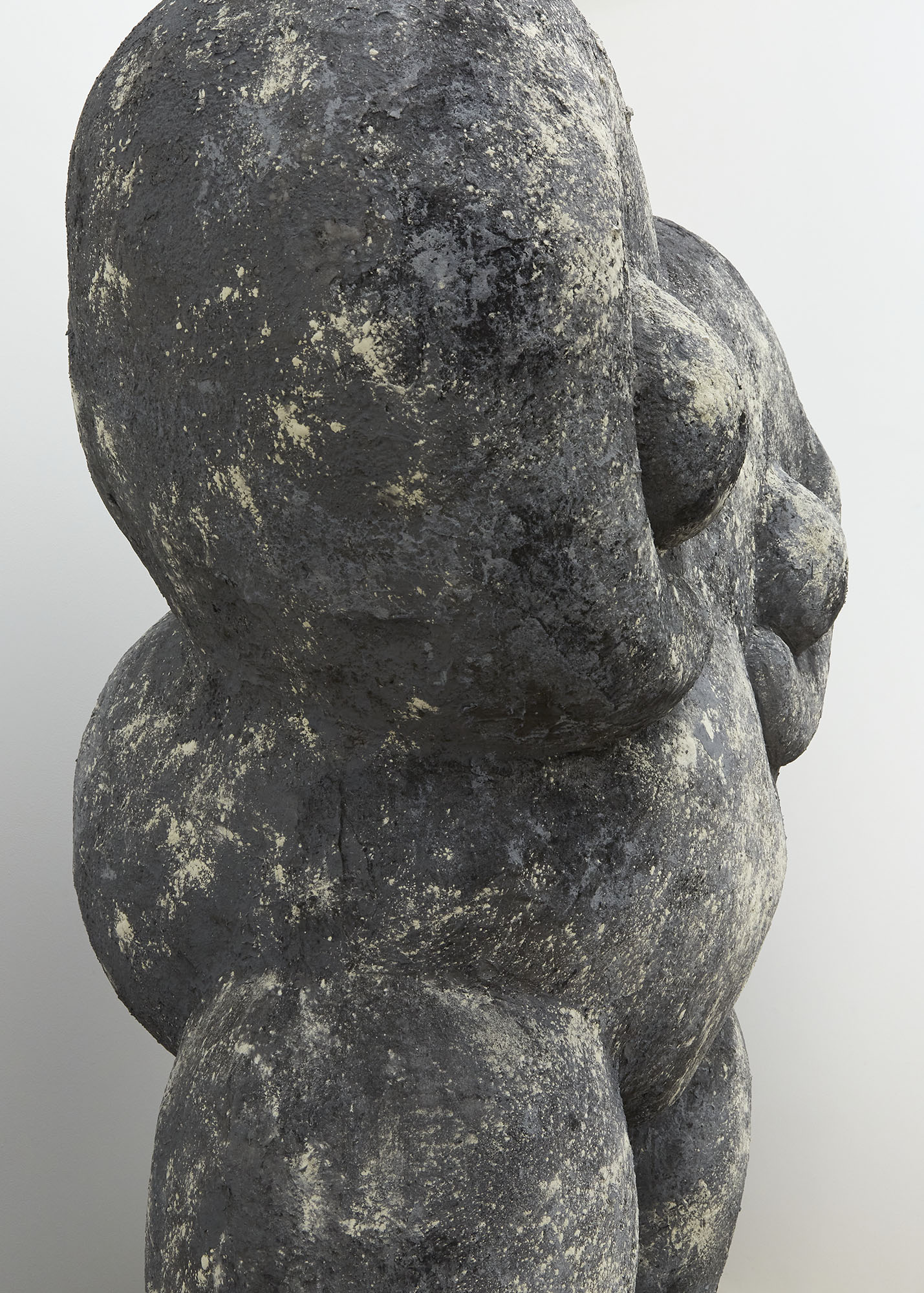 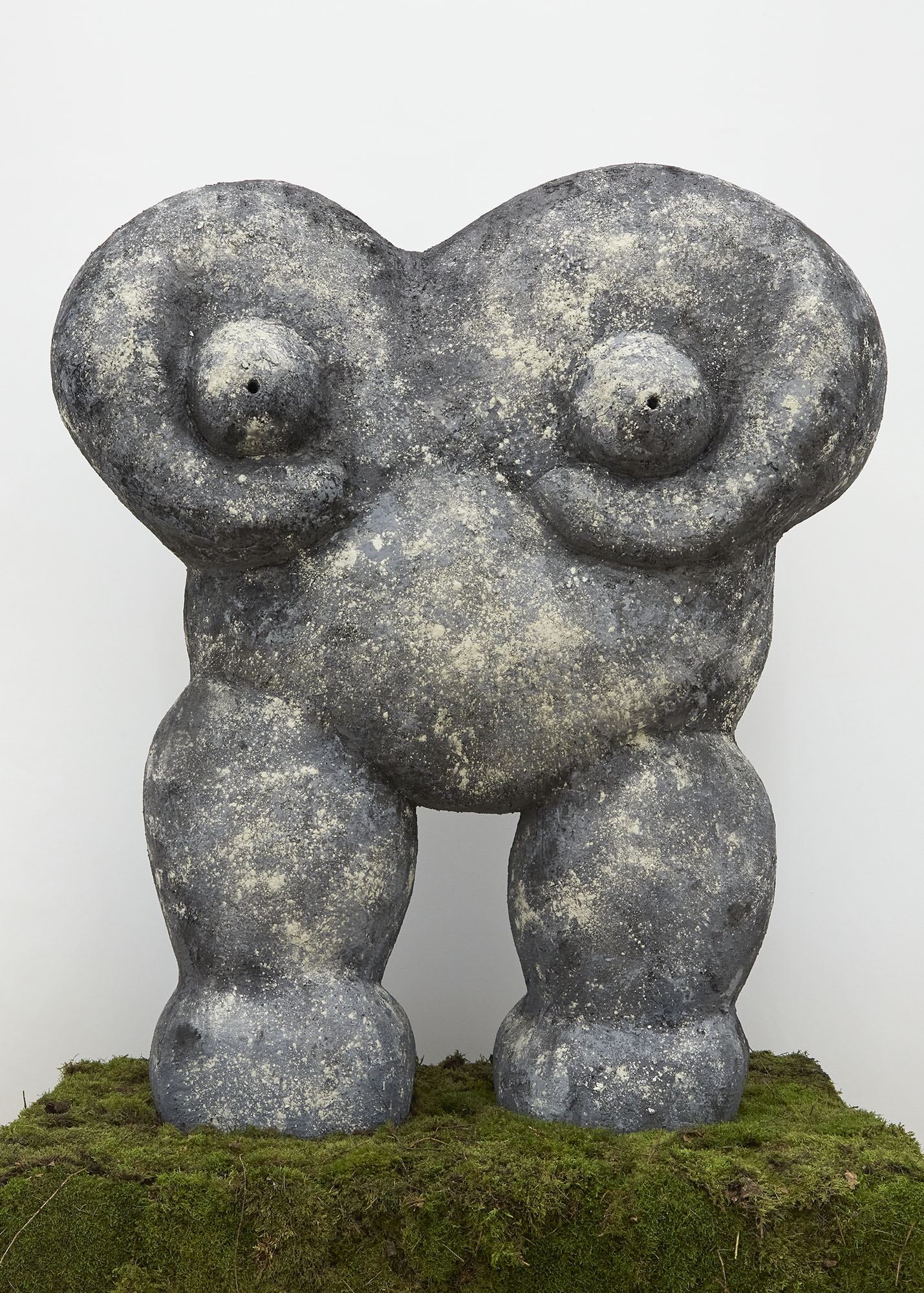 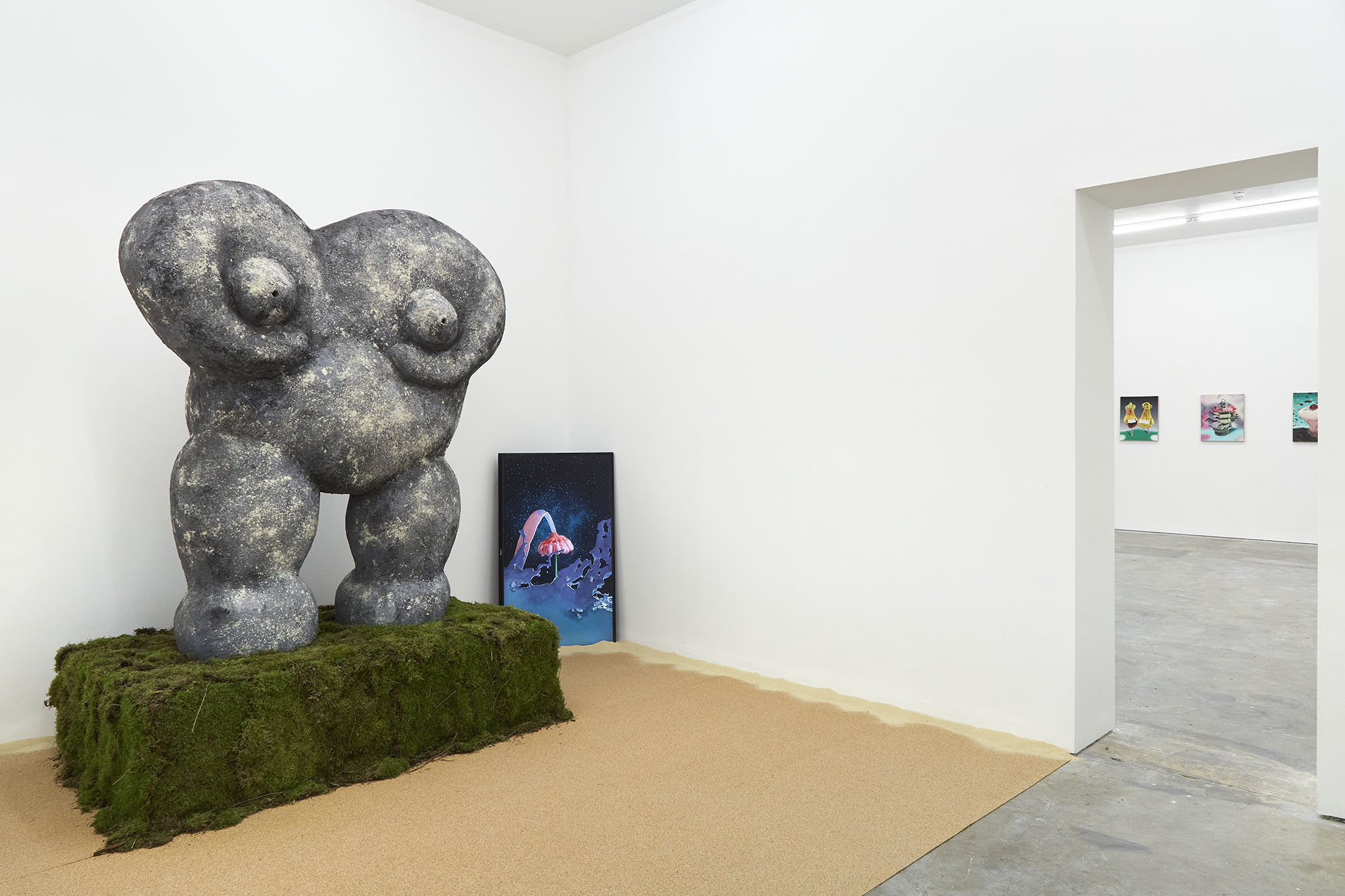 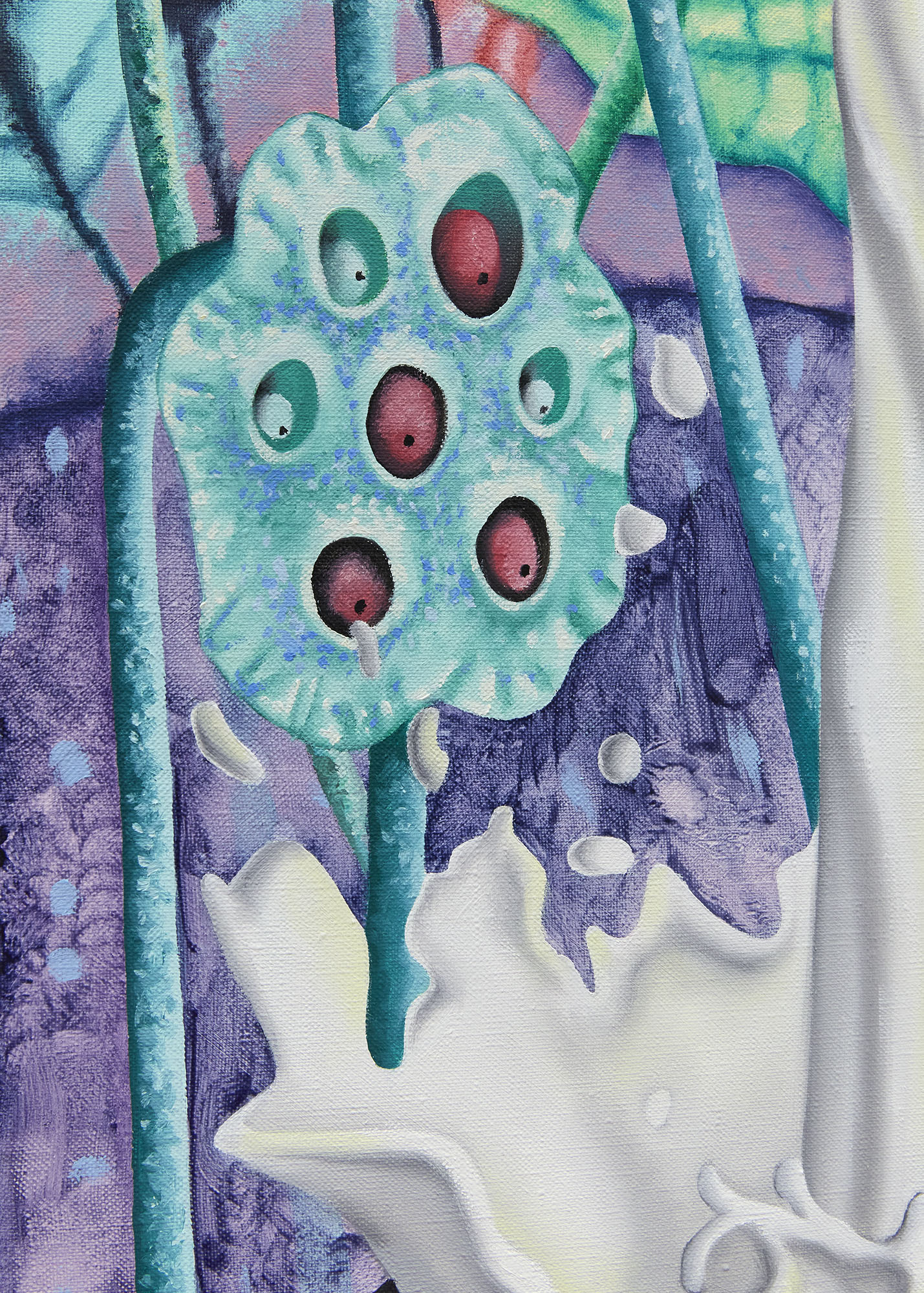 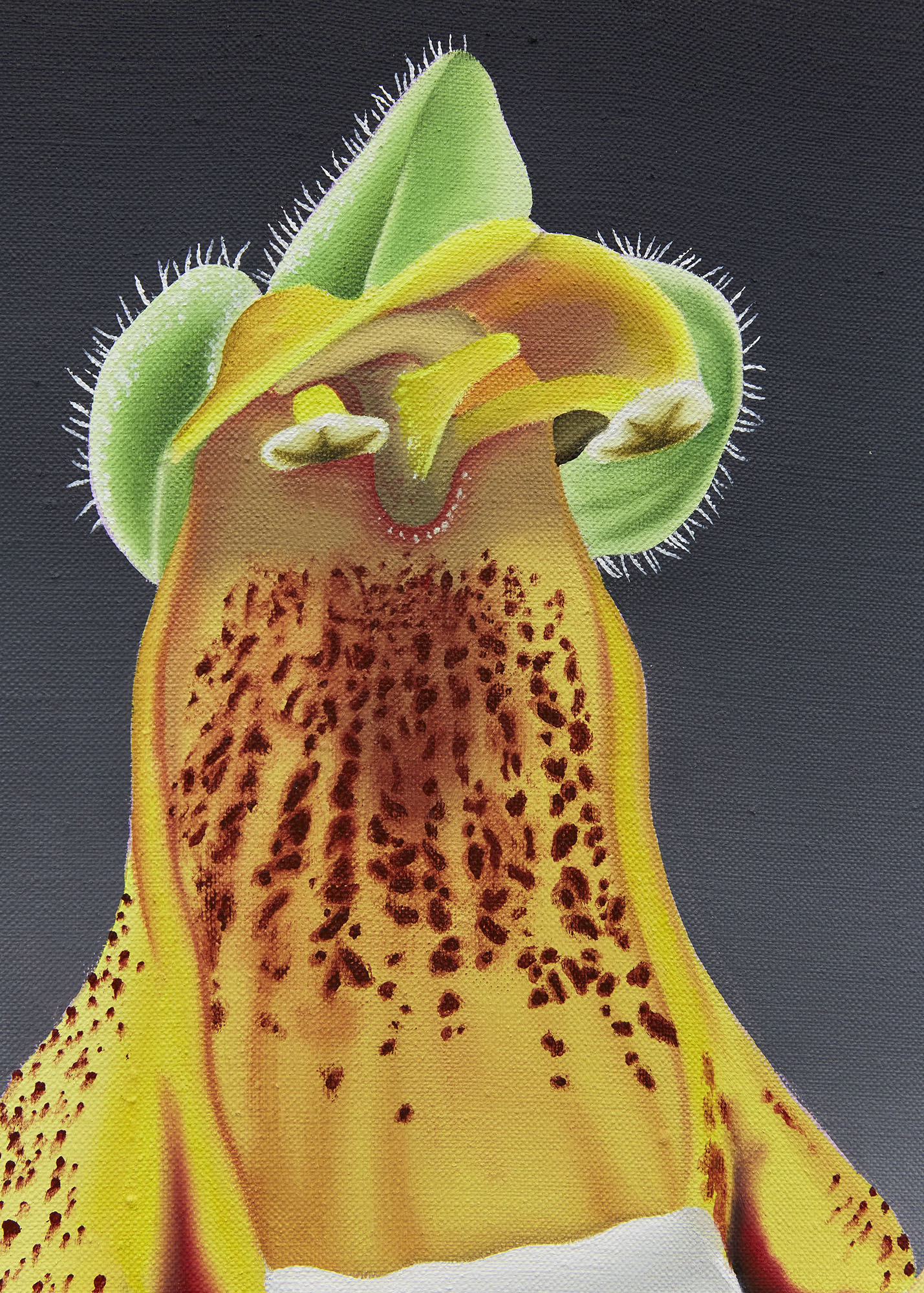 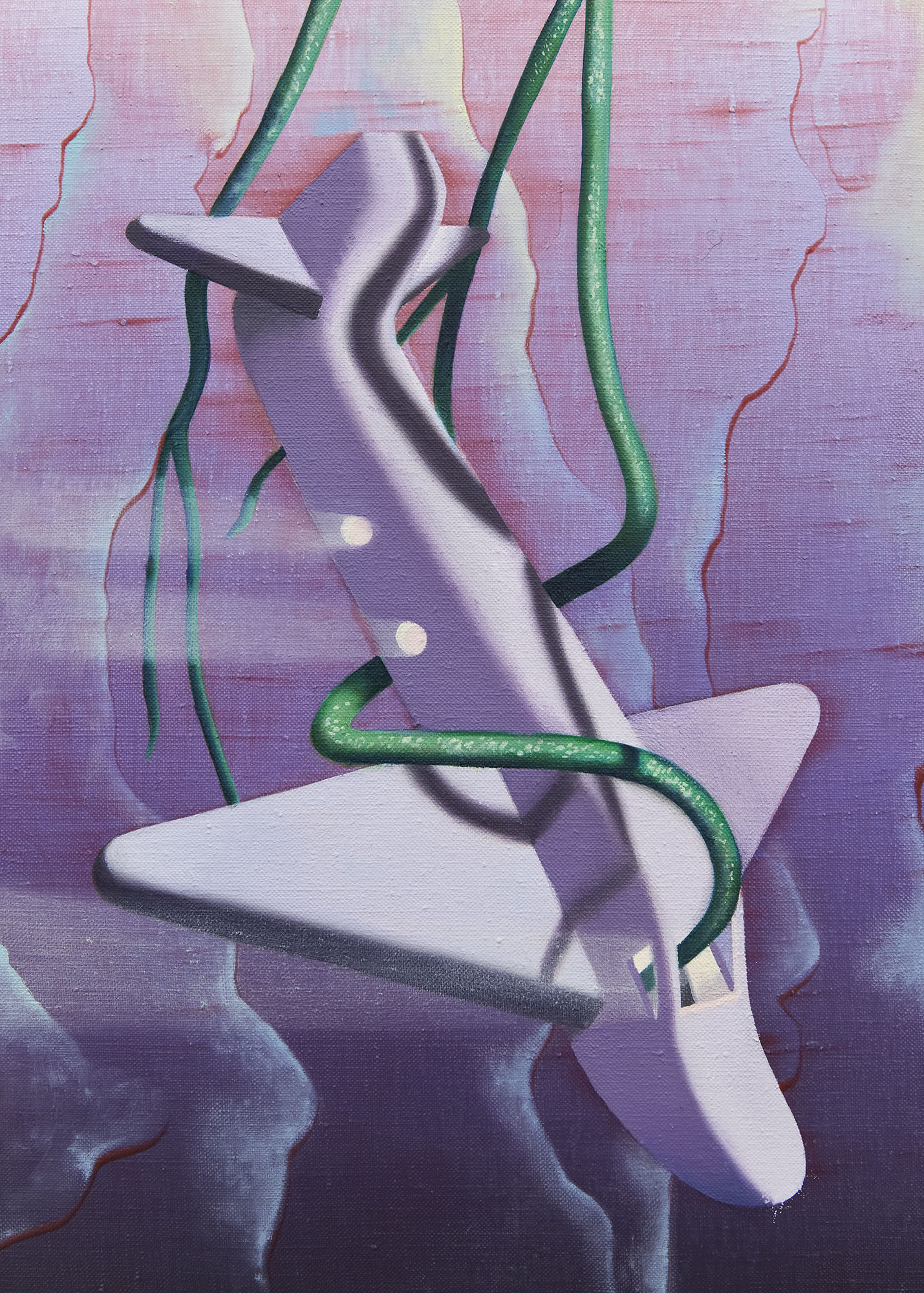 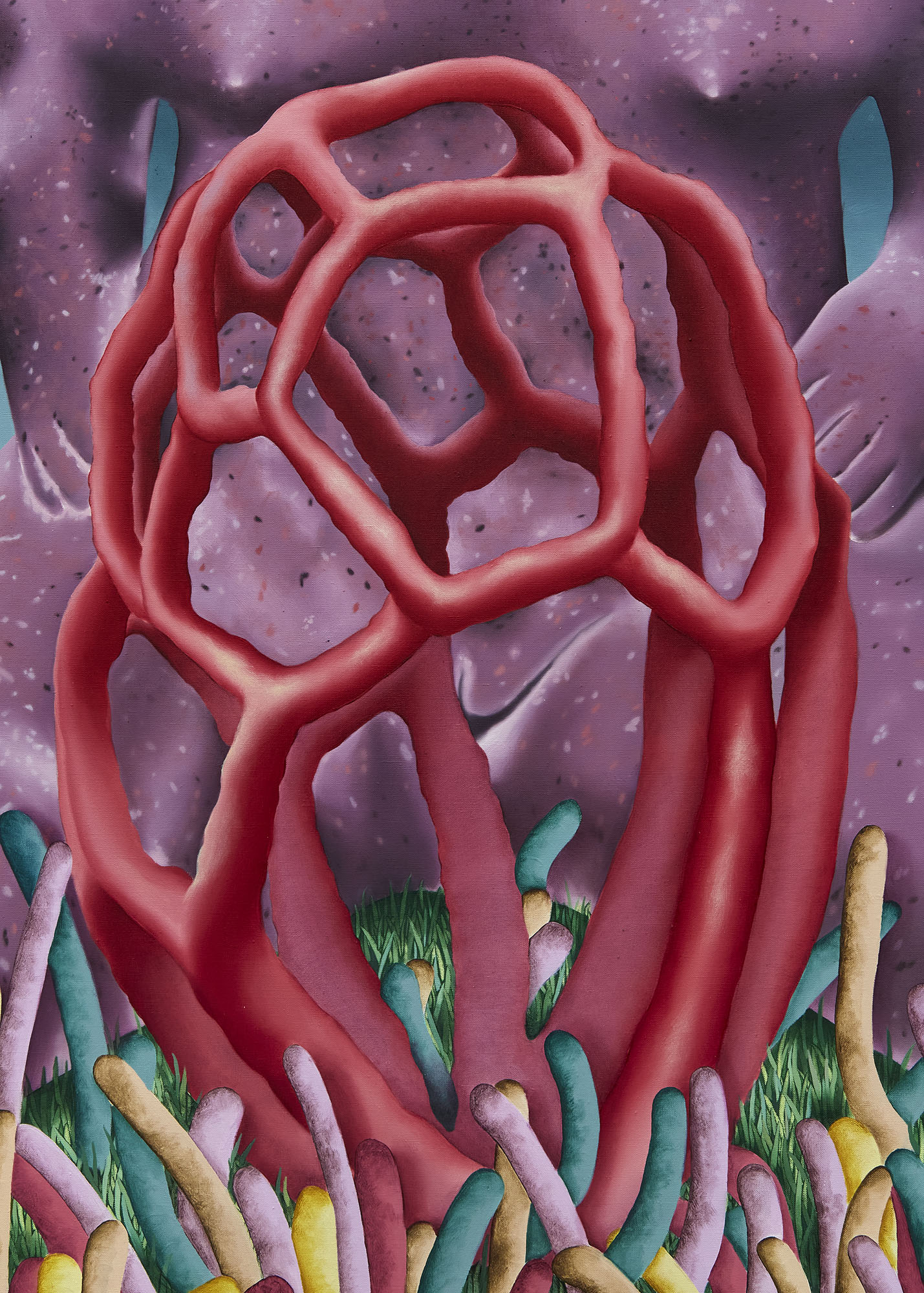 The Temple (detail)
Strange, wild, transformative
Philomena Epps
‍
‘Is there something inherently queer about pregnancy itself, insofar as it profoundly alters one’s “normal” state, and occasions a radical intimacy with - and alienation from - one’s body? How can an experience so profoundly strange and wild and transformative also symbolise or enact the ultimate conformity?’– Maggie Nelson, The Argonauts, 2015

Jane Hayes Greenwood’s exhibition at Castor Gallery, Garden of the Night, is comprised of three distinct series of paintings, executed in her characteristic high key and luminescent colour palette, and a sculptural installation and CGI video. The artist draws on her research into herbalism and botanical illustrations, specifically looking at obscure medicinal plants, in addition to primeval relics and cultural artefacts, such as Venus figurines, that allude to the discourse surrounding the symbolic visual representation of women over centuries.

The smaller-scale paintings in the exhibition derive from Hayes Greenwood’s extensive The Witch’s Garden series, first initiated in 2019. She refers to them as ‘portraits of dream-like plants’, inspired by herbal fertility guides and books on alchemy and magic. The other-worldly organism in I Look For You Underneath The Damp Earth (2021)is gelatinous and lava-like, with its forms like glacé cherries adorning a cup-cake volcano of red cells, while The Alien (2021) curls and ripples in its tightly bound, pastel-hued structure. Rather than floating in space, these surreal species push through and emerge, rupturing the earth with their advent, like the tree in The Revelation (2020), which has grown through a pile of rocks. Through the development of the series, the insinuation of conception is substituted by the evocation of new birth. The furry and freckled yellow flowers in Standing By (2020) appear to hold white pillows within their drooping bell-shaped folds, as if awaiting an arrival. In Clusterfeeder (2021), the mass of seedpods looks like the rasping open beaks of newborn chicks, plaintively chirping for their next feed.
‍
In the six large-scale paintings that comprise The Temple series, the natural world is represented as a fecund and maternal source, embracing a particular lineage of feminist art history in which the female body is shown to be spiritually connected to the landscape and other mythic sources of energy. Hayes Greenwood also draws from the voluptuous shape of pre-historic fertility and goddess statues, like the Venus of Willendorf, often headless with exaggerated breasts, abdomens, buttocks, and pudenda. The inferred corporeal abundance of these ancient totems is made explicit by Hayes Greenwood in her works which reference breast feeding. In The Milky Way (2021), the dappled breast is configured as a wellspring, with the milk pouring and splashing into a leaky vessel.  Akin to the multi-breasted Fountain of Nature at Villa d’Este, designed by Gillis van den Vliete in 1568, milk shoots from the nipples of the porous being in Supply and Demand (2021), as if watering the young green shoots that are growing through its body, sprouting from the soil.
‍
The ample stone-coloured figure from In the Garden of the Night (2020) has also been realised as a larger-than-life sculpture, which stands on a moss-carpeted plinth. It is accompanied by a video showing a CGI rendering of a breast milk duct tissue, which is visualised as a claret red flower with fibrous petals, releasing an endless spray of gold and mercury milk, creating a slowly rising pool of glistening viscous liquid.
‍
Hayes Greenwood’s most recent series of paintings, Rooting, could be framed using Jungian psychoanalysis, notably his theory of the ‘nigredo’, where he used the alchemic metaphor as a way to describe the psychological task of ‘navigating the dark night of the soul’. While her previous works illustrate life on the earth’s surface, Rooting goes underground, portraying various objects caught within a matrix of roots that exist within a subterranean, watery environment. If the earlier paintings convey the experience of pregnancy and post-partum as a physical process of unruly bodily metamorphosis, these later works iterate a similar psychic upheaval, profoundly strange, wild, and transformative.
‍

‍
Jane Hayes Greenwood was born in Manchester and now lives and works in London. She studied MA Fine Art at City and Guilds of London Art School 2013 - 2015. Alongside her practice Hayes Greenwood is the co-founder and Director of Block 336.
‍
Recent solo exhibitions include The Witch’s Garden,  Gig, Munich, 2019 & Lead Me Not Into Temptation, Block 336, London, 2017.
‍
‍