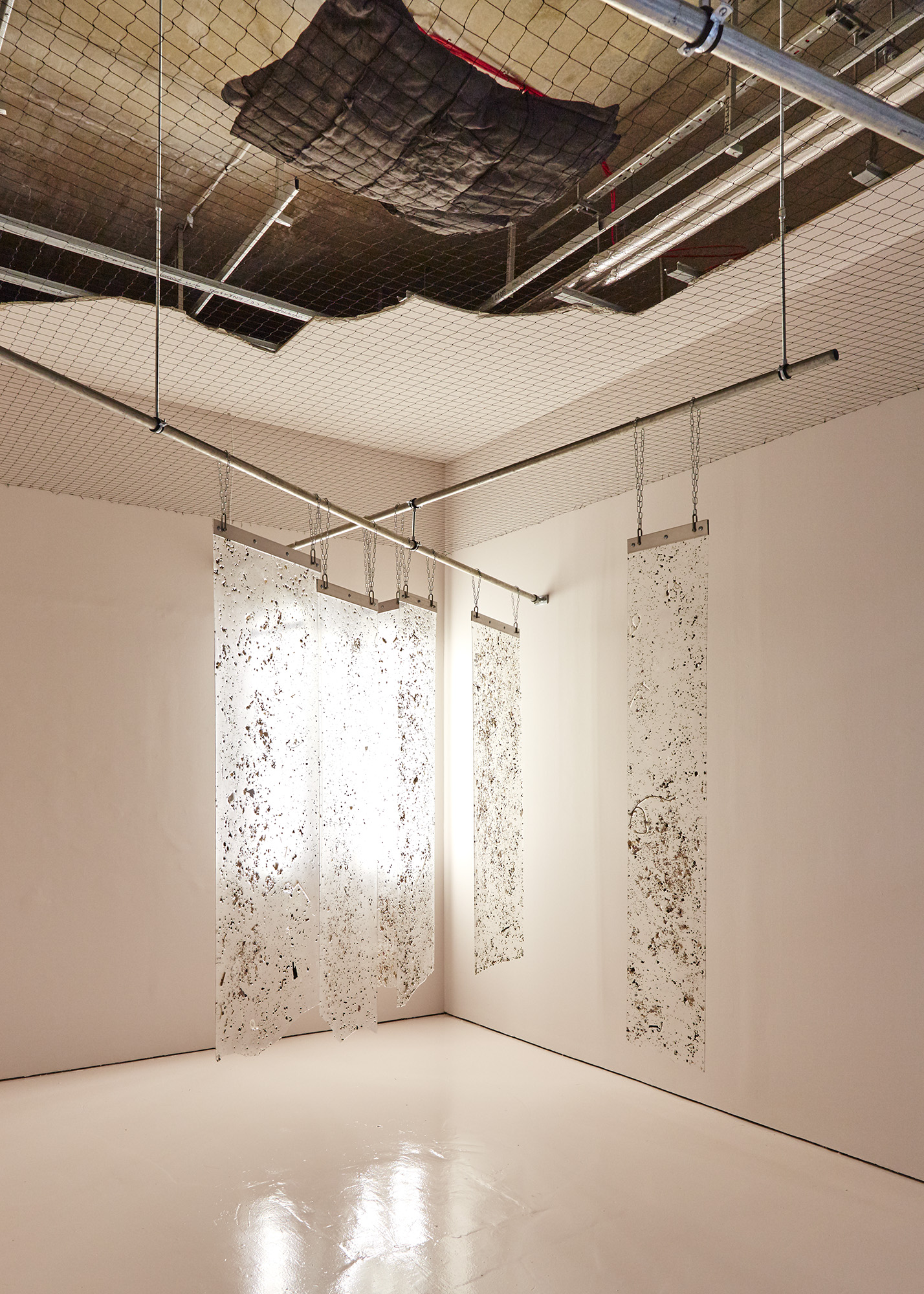 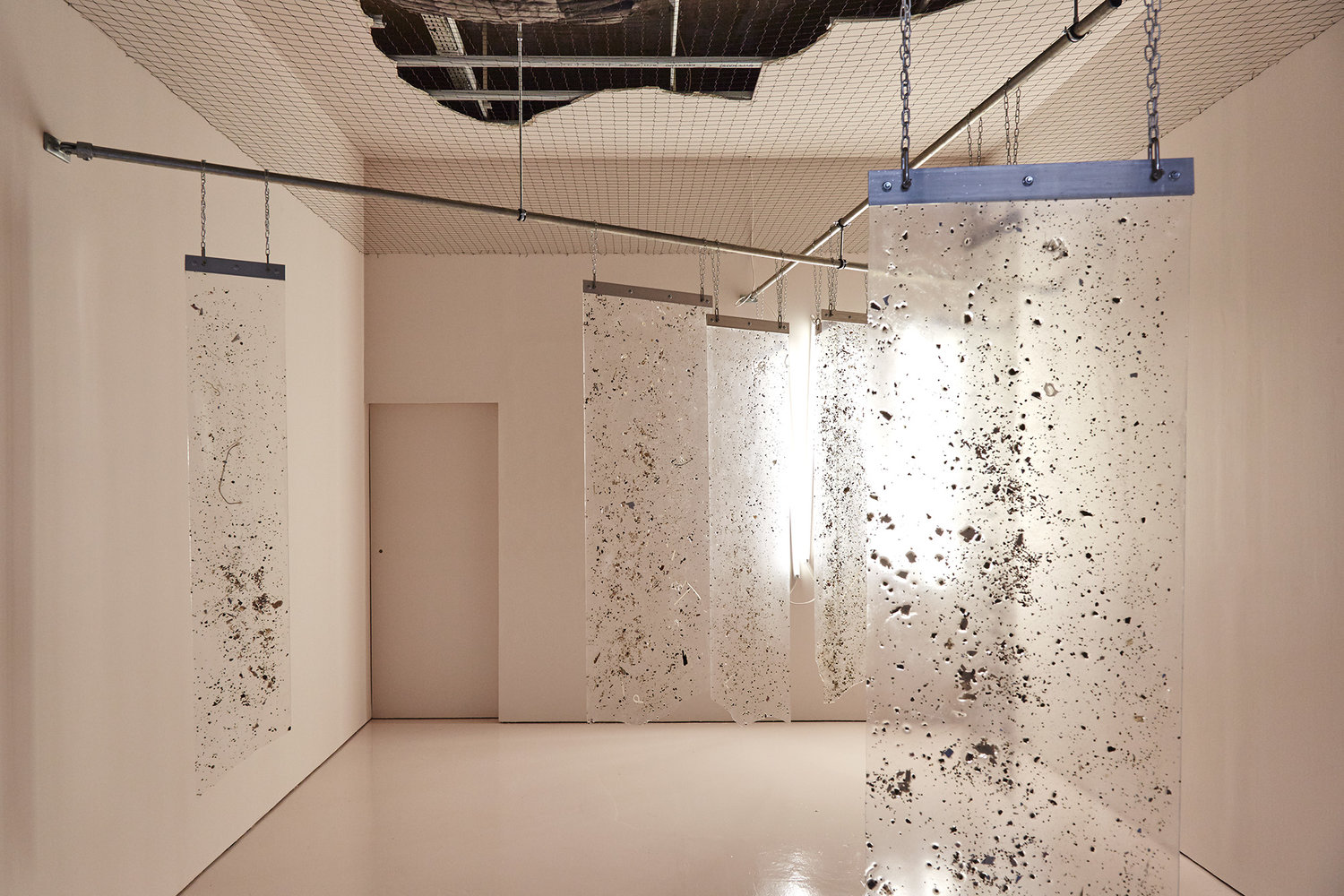 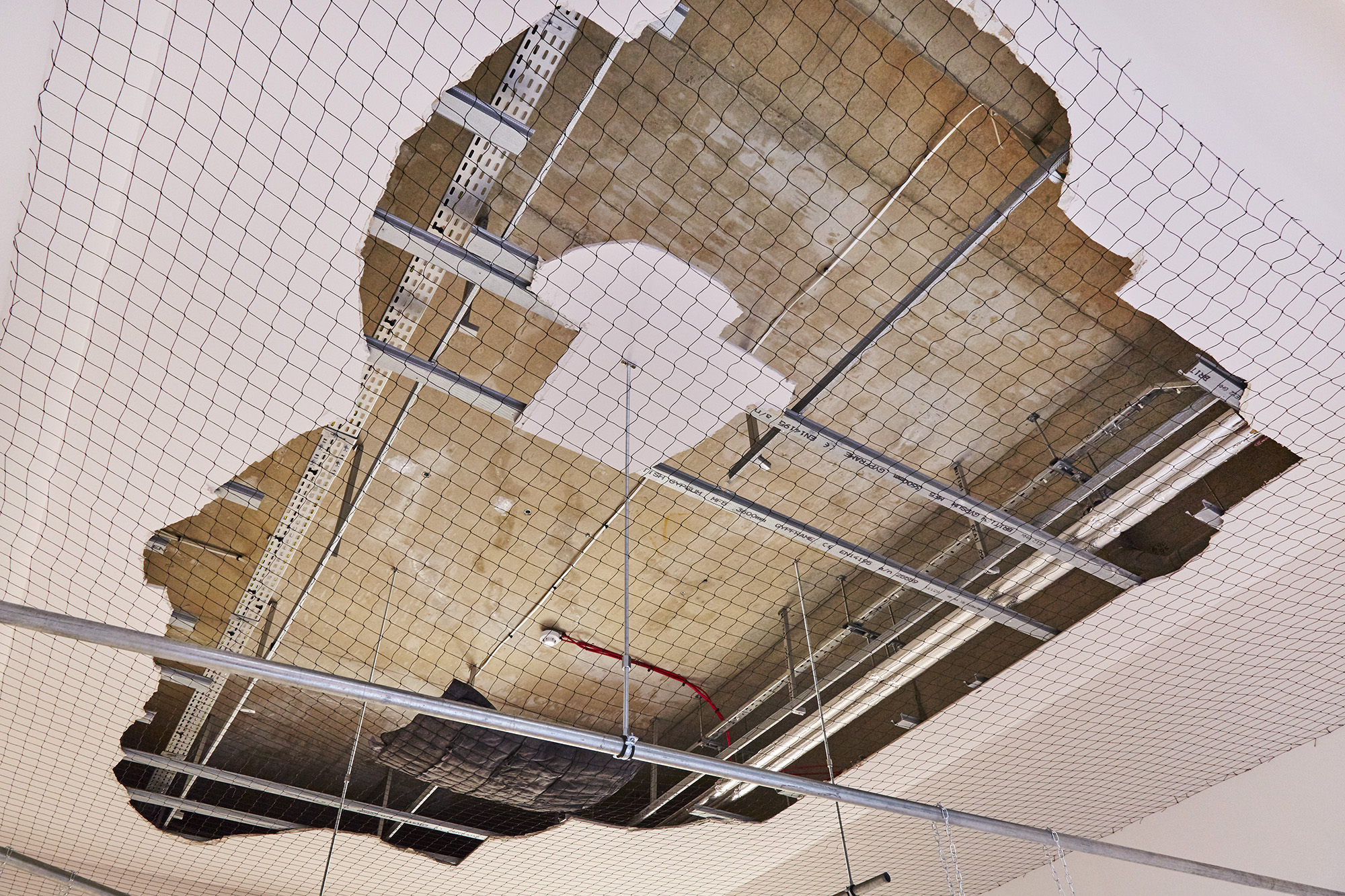 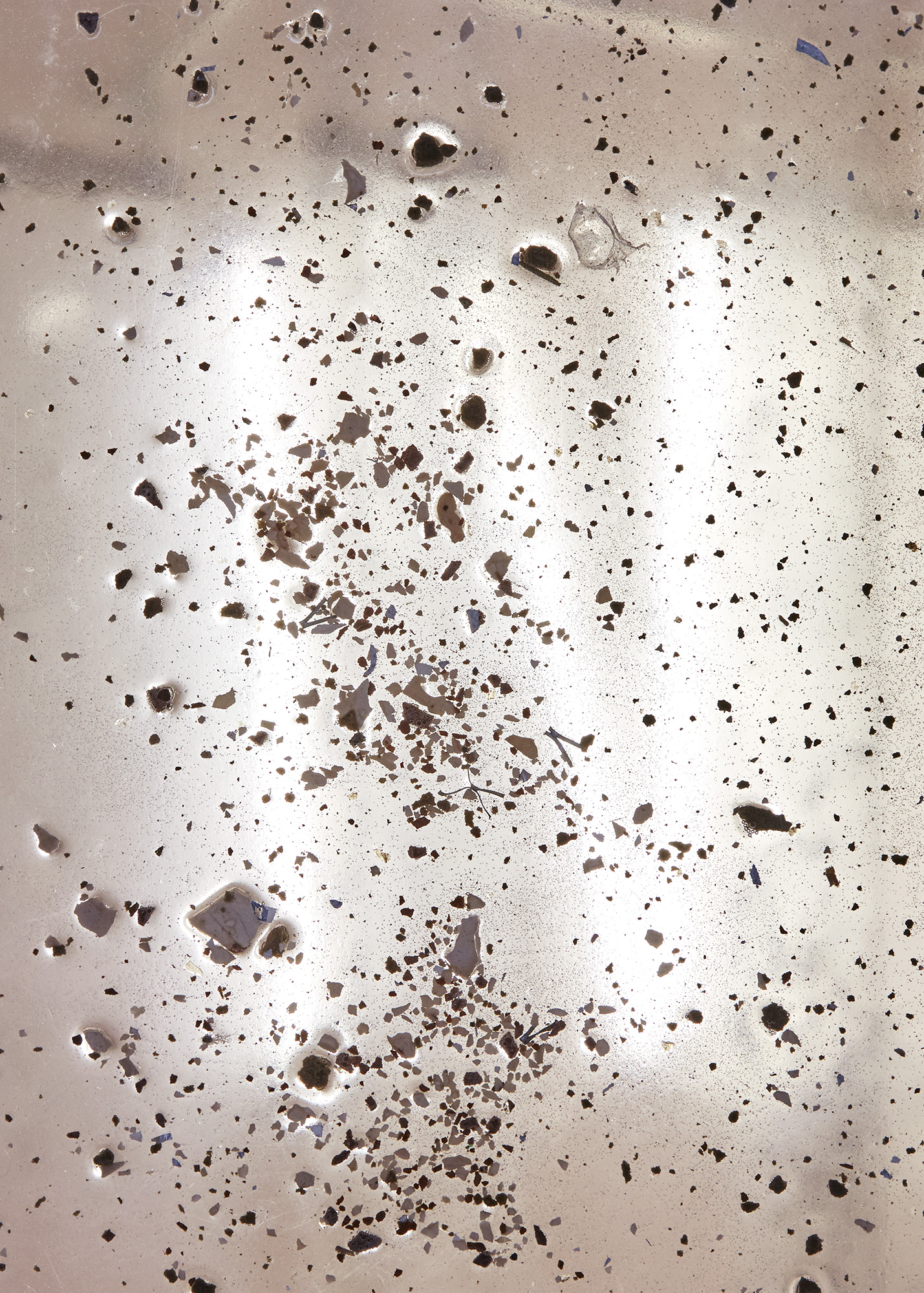 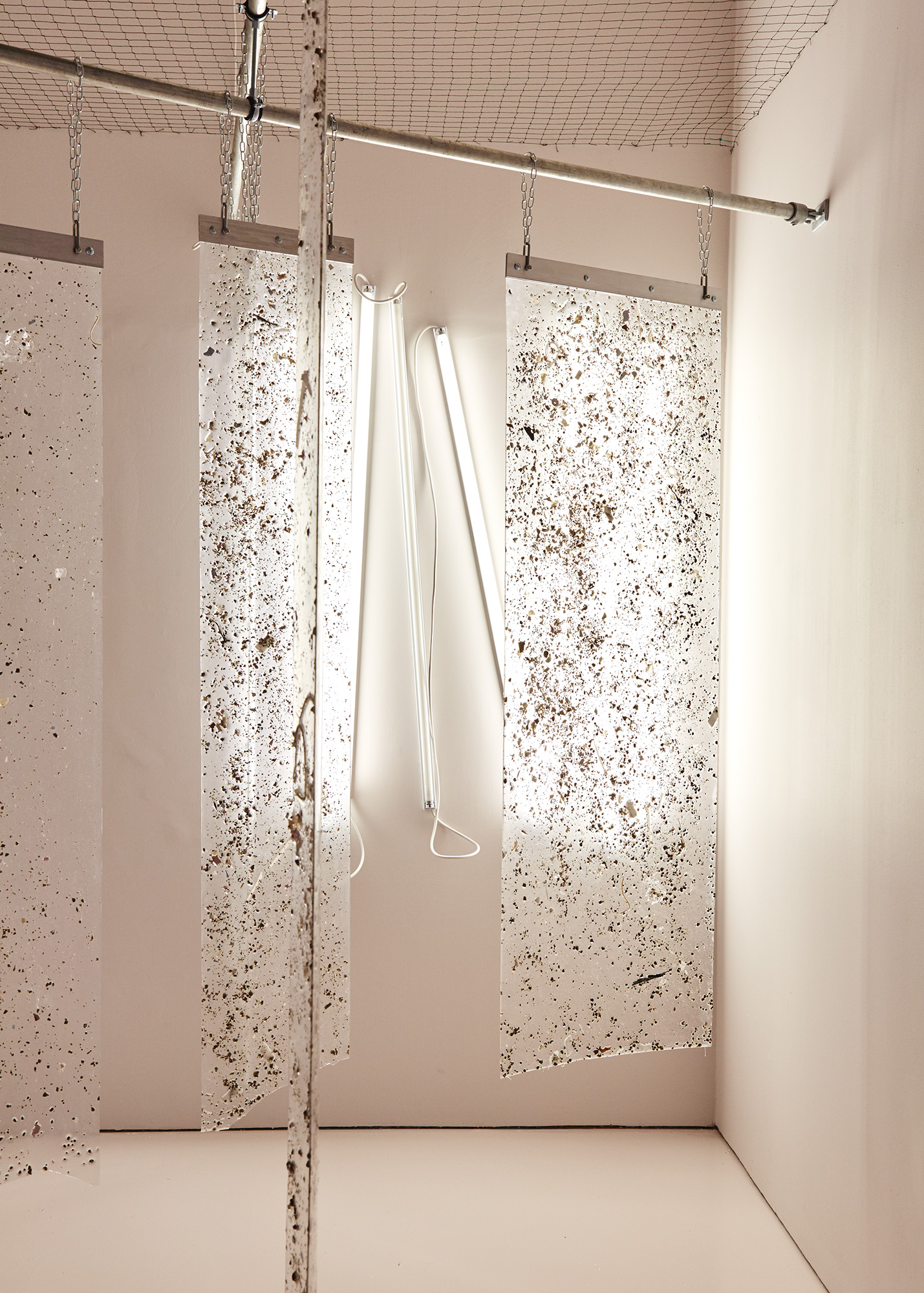 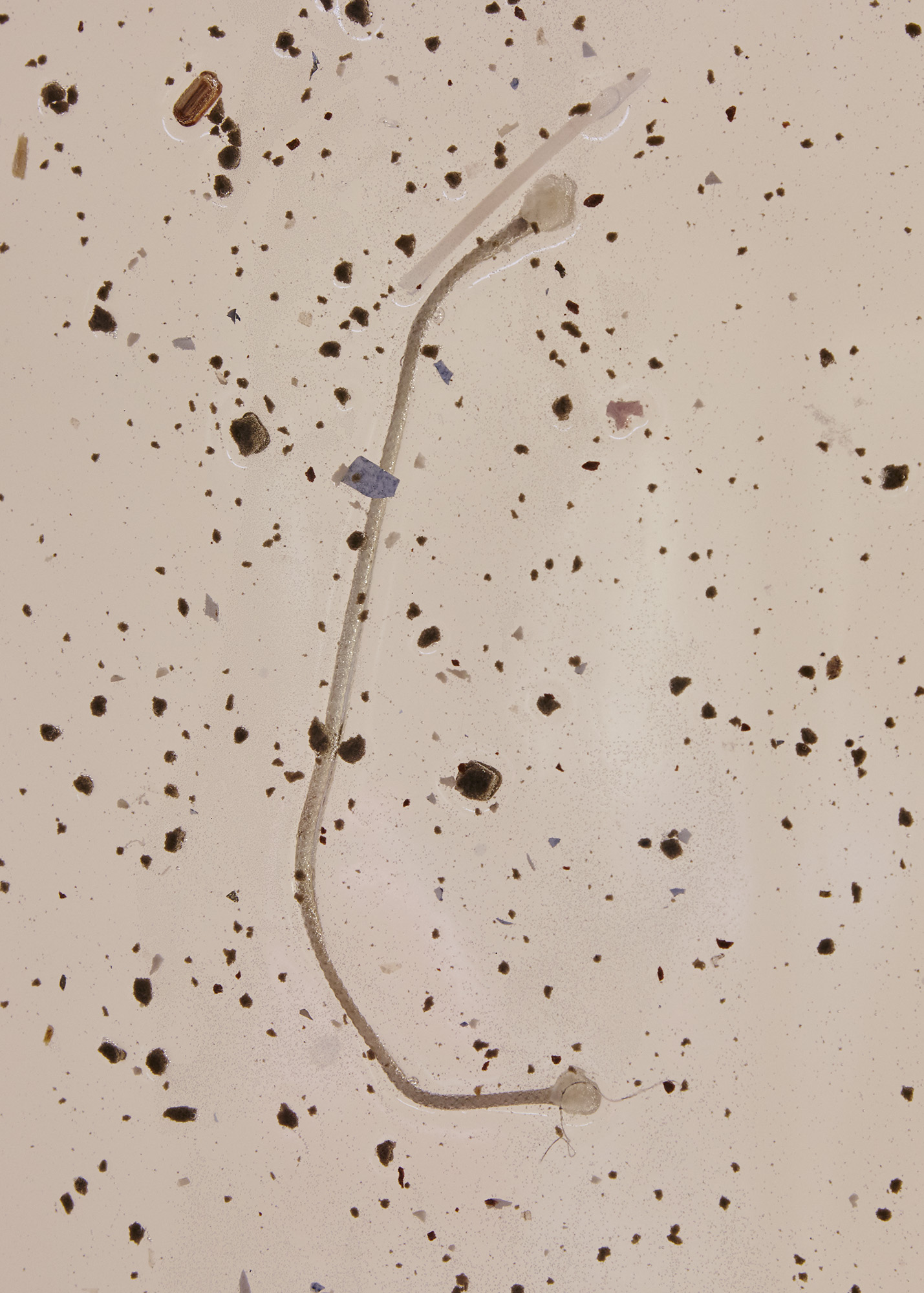 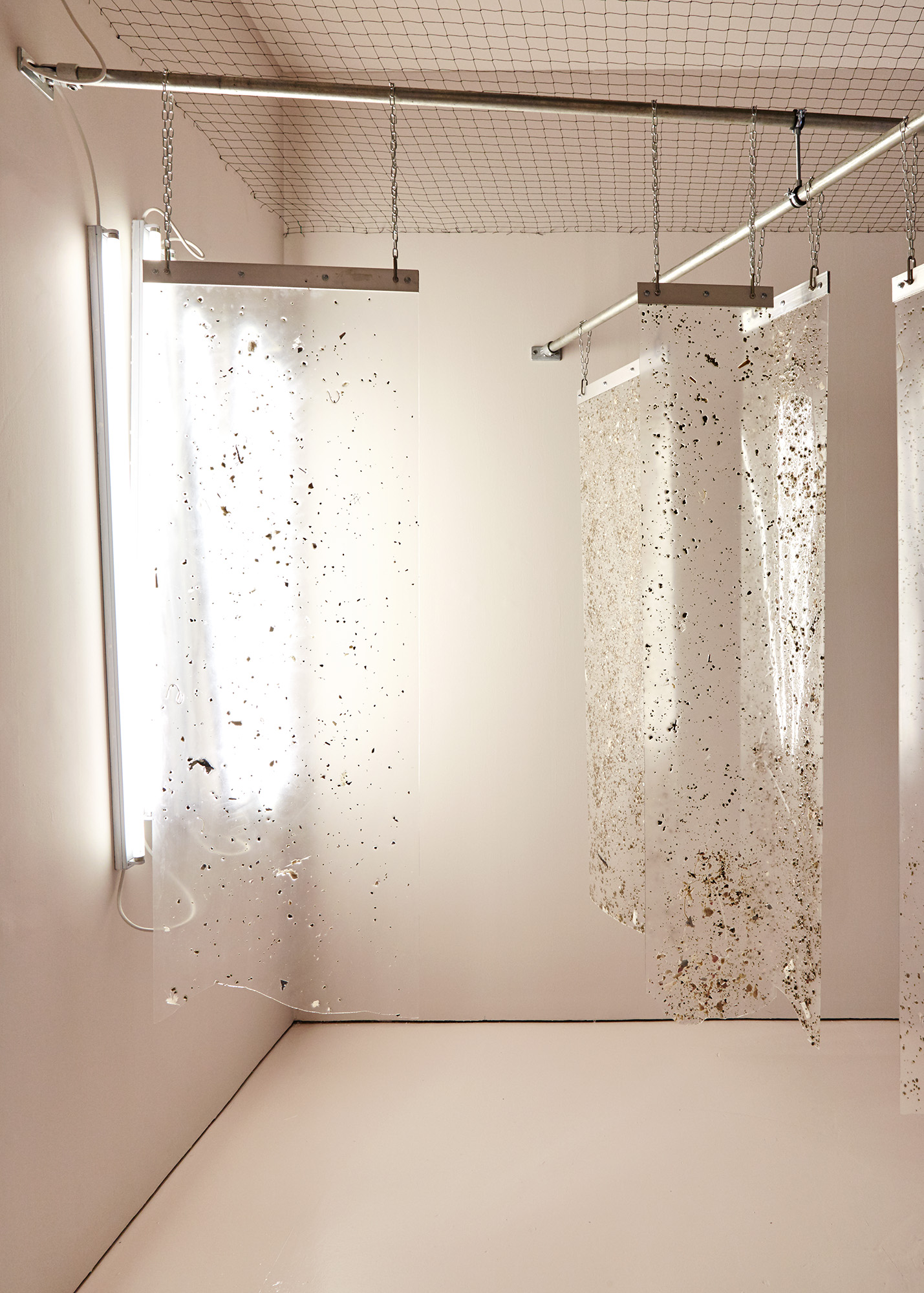 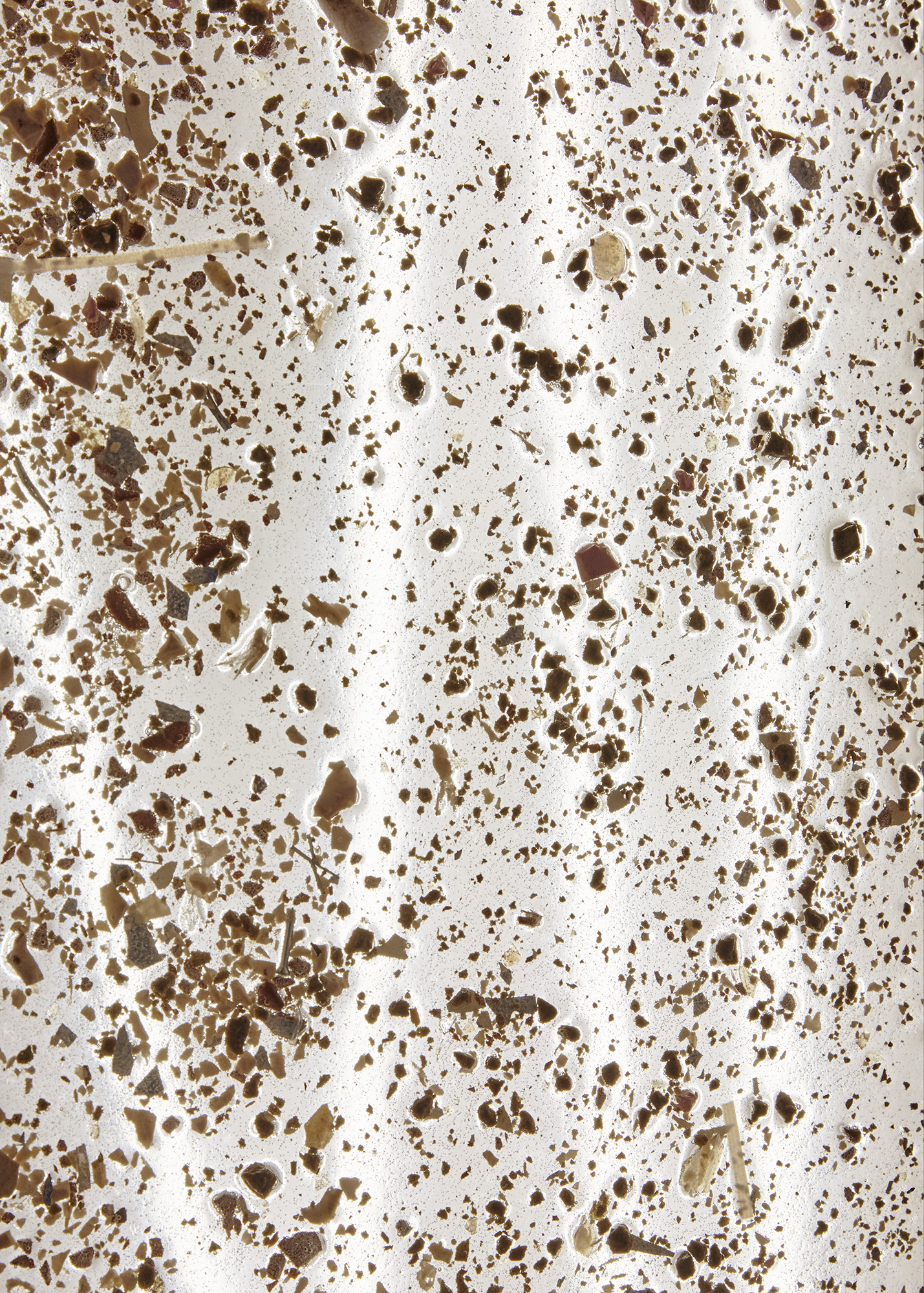 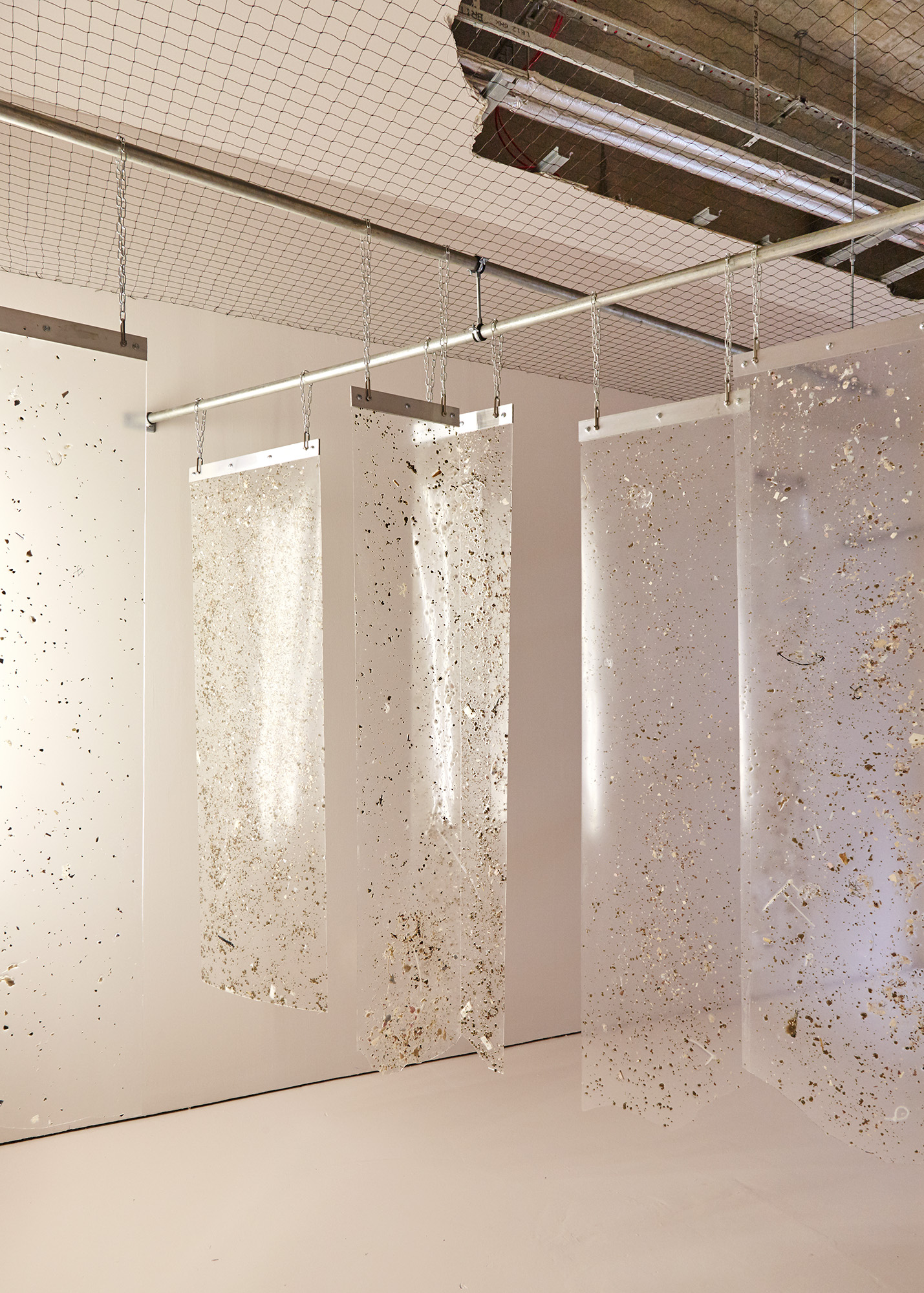 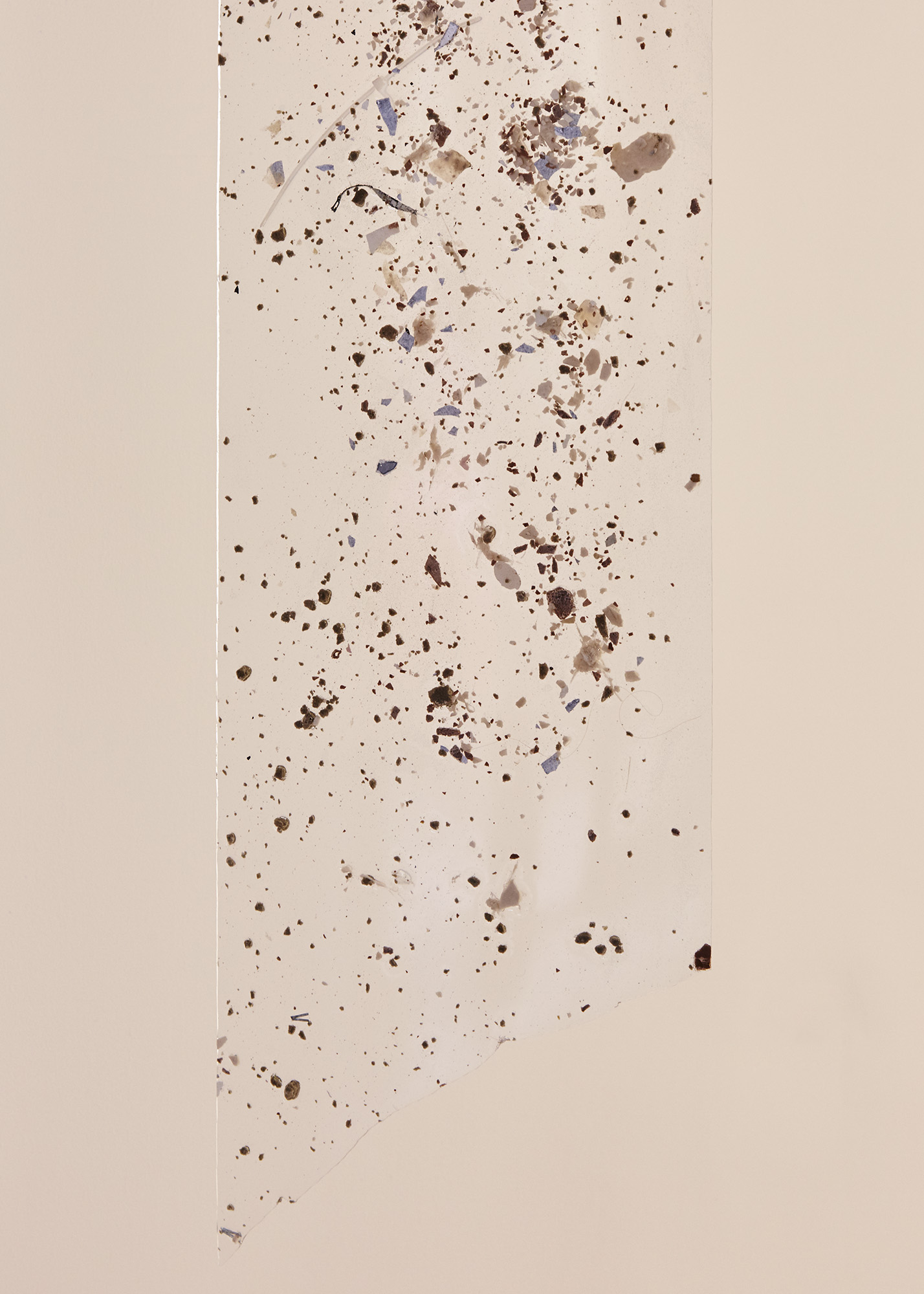 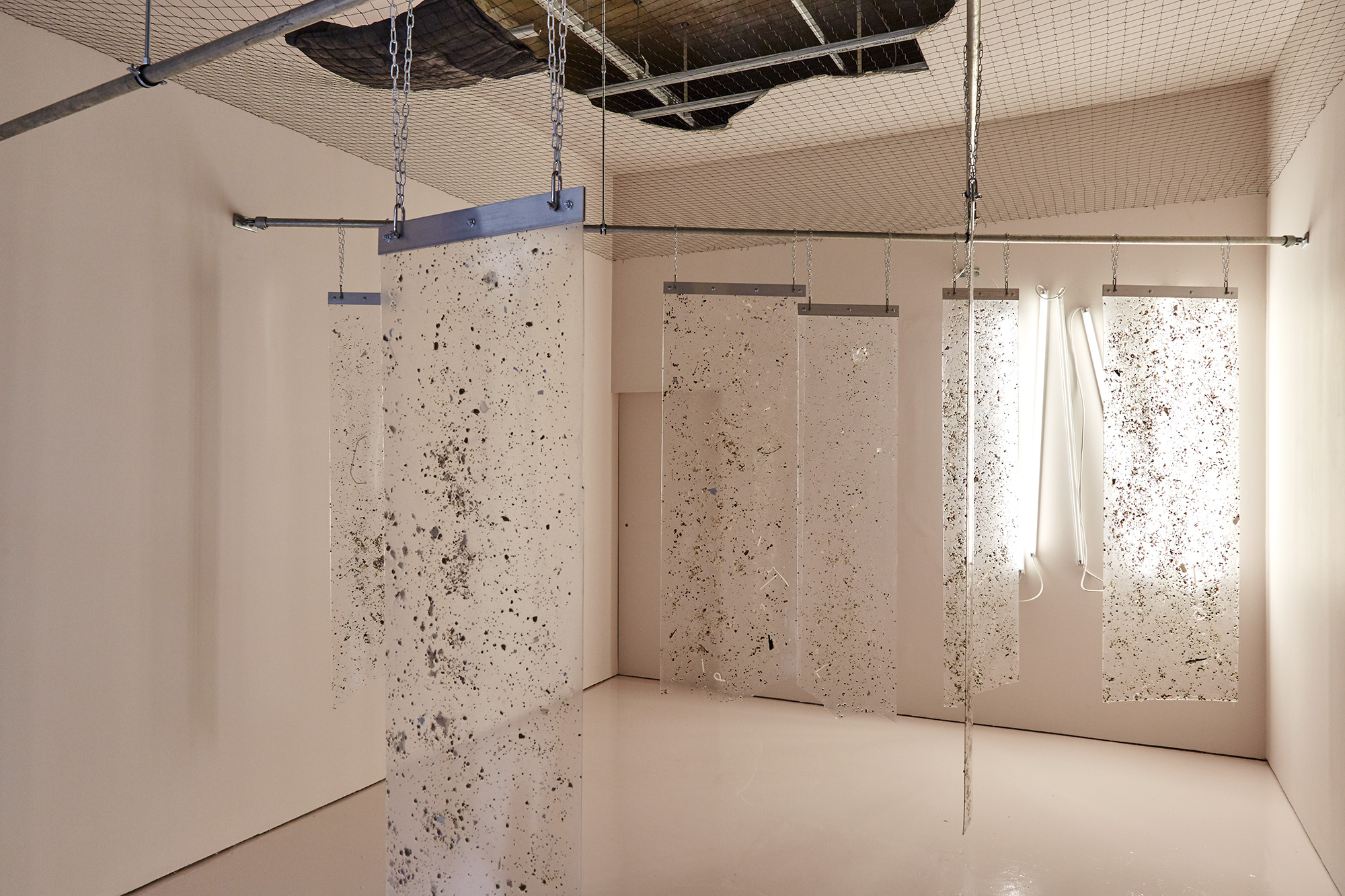 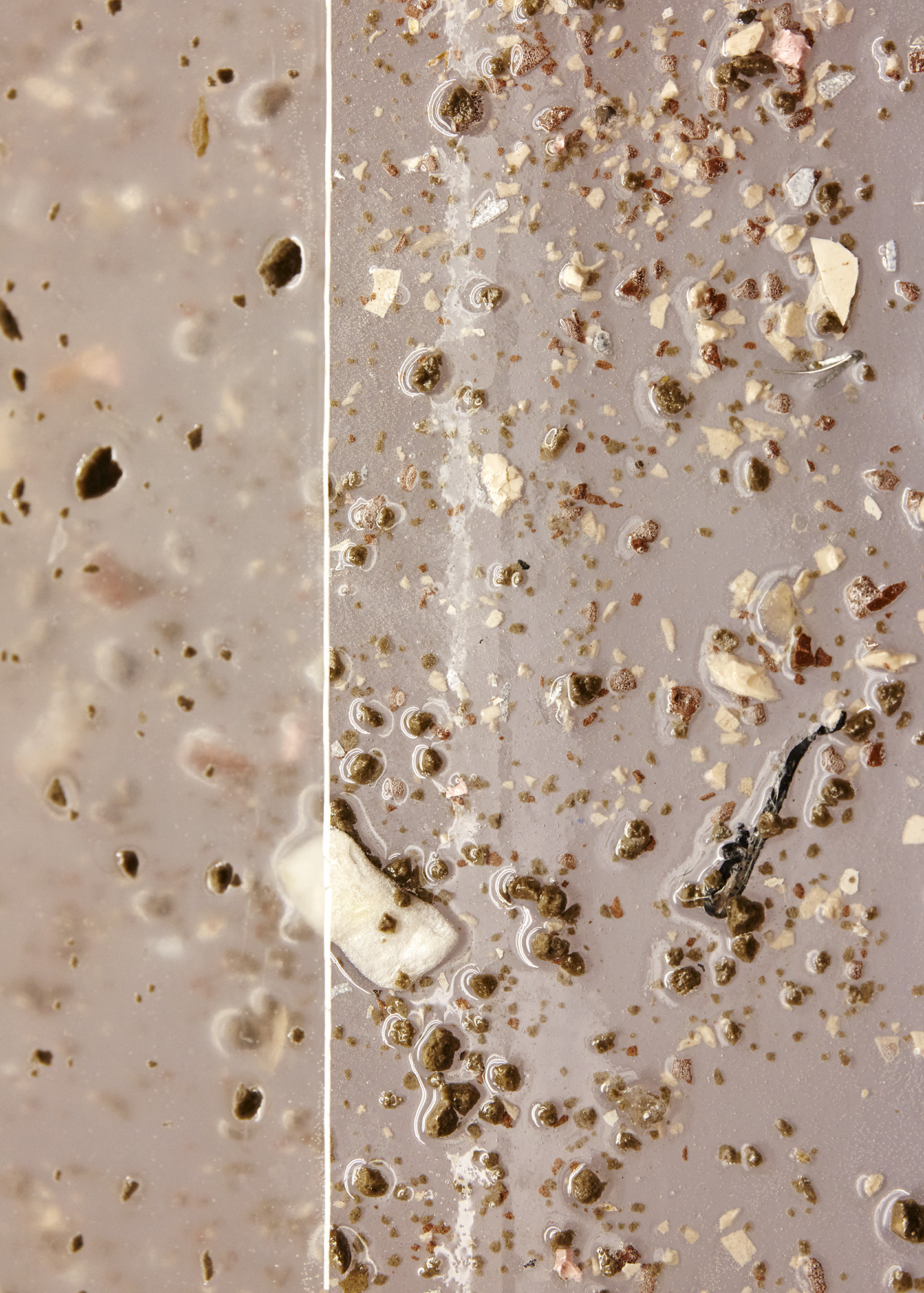 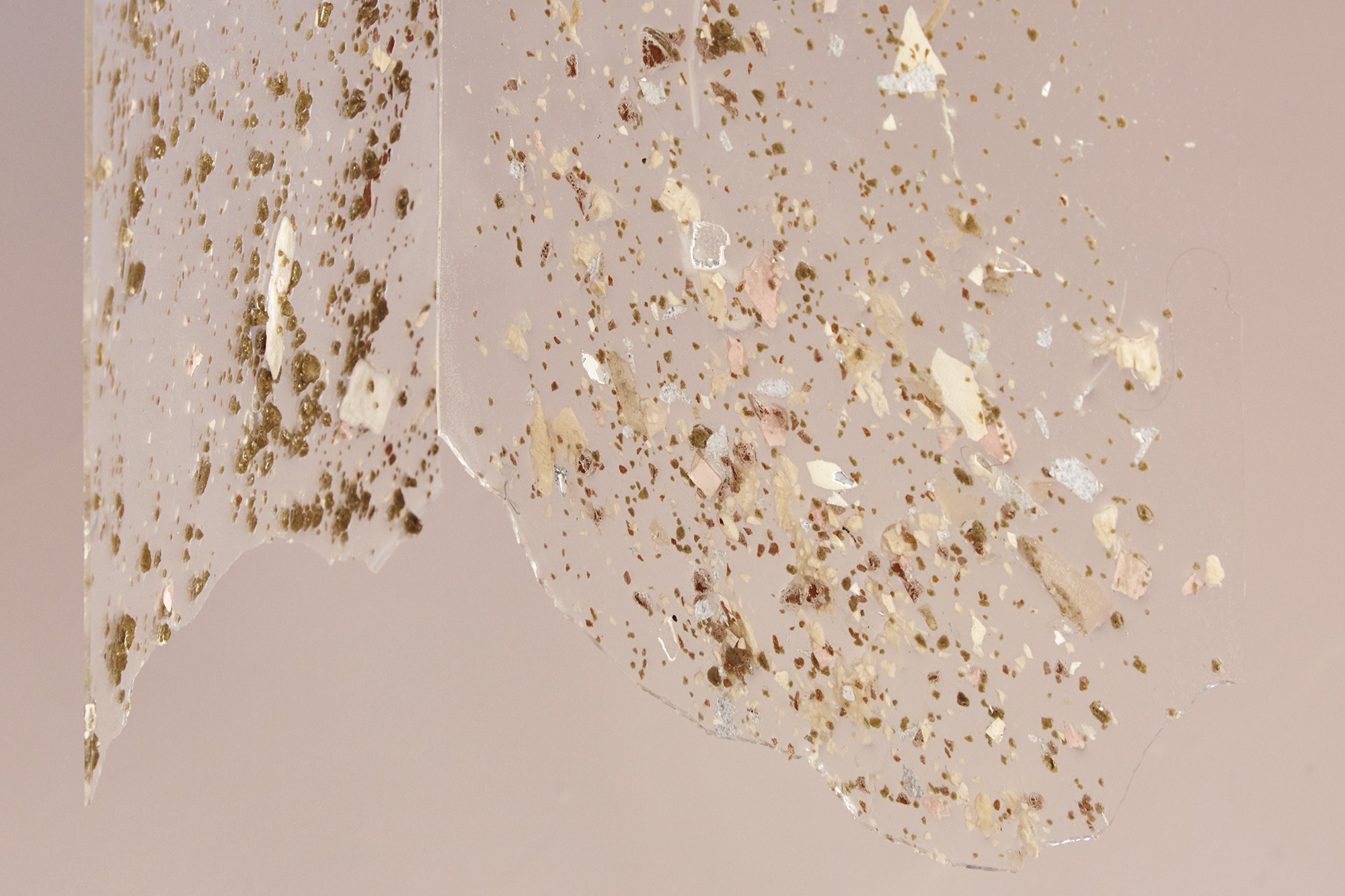 In From The Light is a site specific installation that continues Simon’s practice of deconstructing exhibition spaces and using the residual material to make the work.

Simon grew up on the Isle of Wight where the Victorians made postcards – illustrations of the Island – from the coloured sands at Alum Bay, and it is from early encounters with these objects that he says material and place have become inseparable.

Having previously filled glass tubes and bottles with materials collected and broken down at his studio, Simon traps the same material and that of the exhibition space into rubber screens at Castor.

When entering the space the viewer is immediately confronted by these screens. Looking closely the inclusions are the kind of material you will see in many artists studios. Cable ties, chalk, fiberglass, jesmonite, plaster, string and wire, alongside plaster from the Castor ceiling which has been removed for the exhibition.

The ceiling has been ripped out to reveal the electricity cables and plumbing, things which are typically hidden and provide the space and greater building of accommodation above, with its utilities. Like the material collected in the studio and trapped in rubber, these normally unseen things are the bits that make things happen.

Walking around and in between the screens we notice that some are full of material whilst others contain very little. The scale of the inclusions requires us to get up close to take a better look, but we may not like what we see. Trapped in the rubber the material occasionally blisters or breaks out of the surface, and sometimes drawn toward an area, it overlaps clumsily.

The Castor lights which usually run in banks of three either side of the space have been pulled from the ceiling and relocated to the back wall where they are attached to make a single light source. It is important that the light is not an even covering for ease of examination, but it illuminates some areas, perhaps showing us more than is comfortable to see, whilst others remain obscured by both shadow and the installation itself.

Looking up toward the ceiling is a textile that rests inside the exhibition space. It is an ongoing series of self-portraits that are manipulated to fit into different spaces. Made from cotton studio rags, the making is a process of both collection and accumulation similar to the rubber screens.