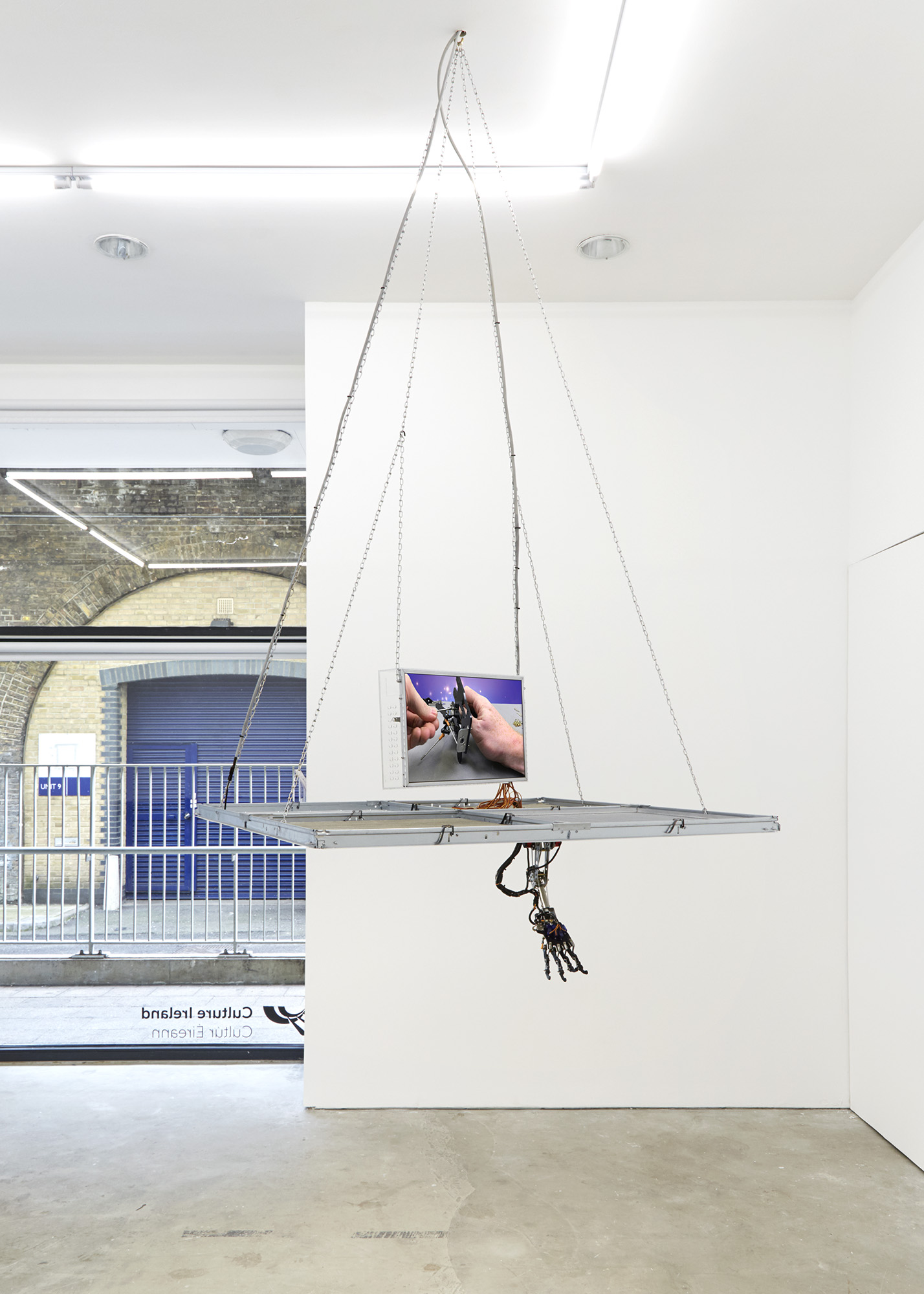 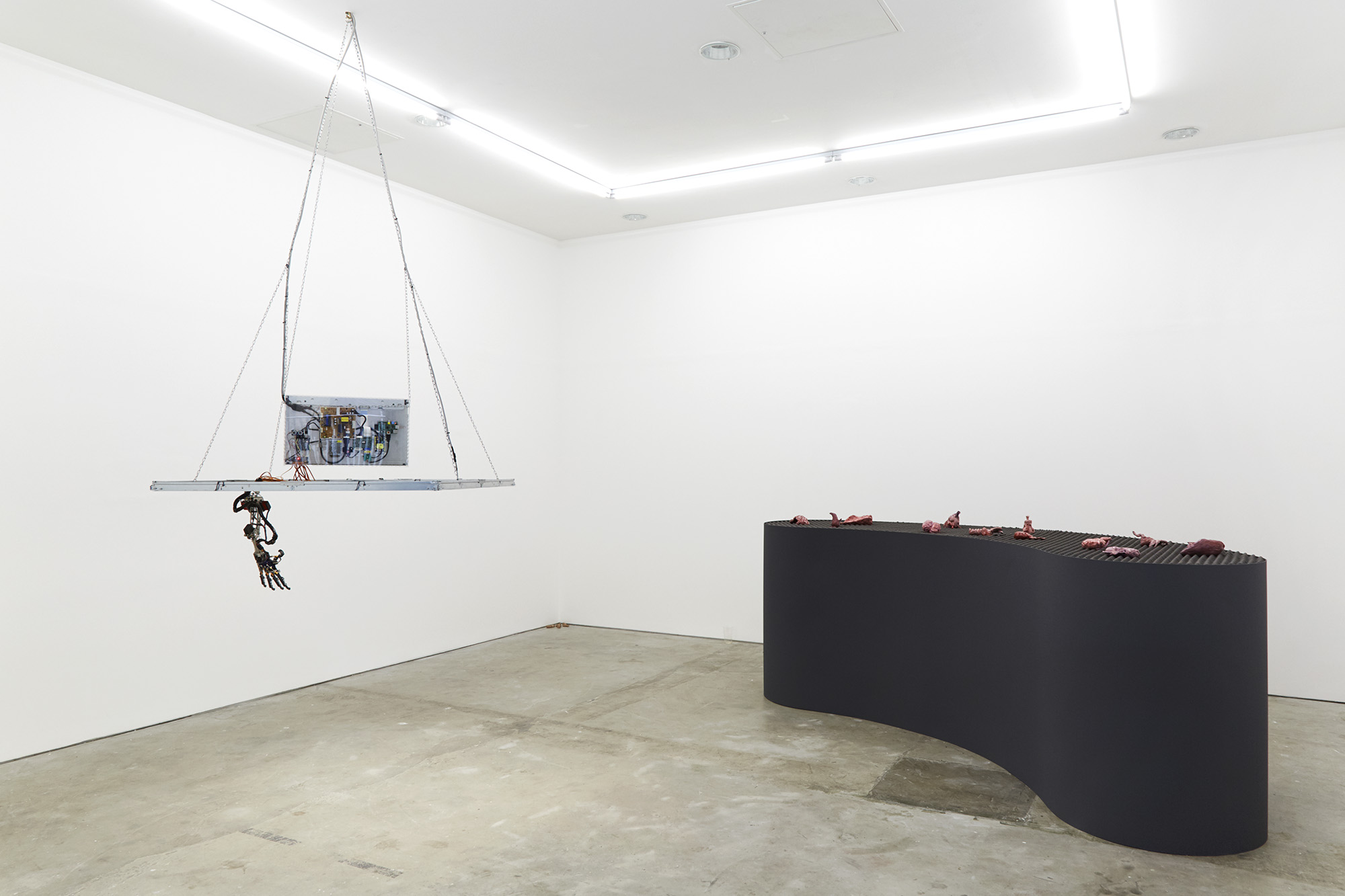 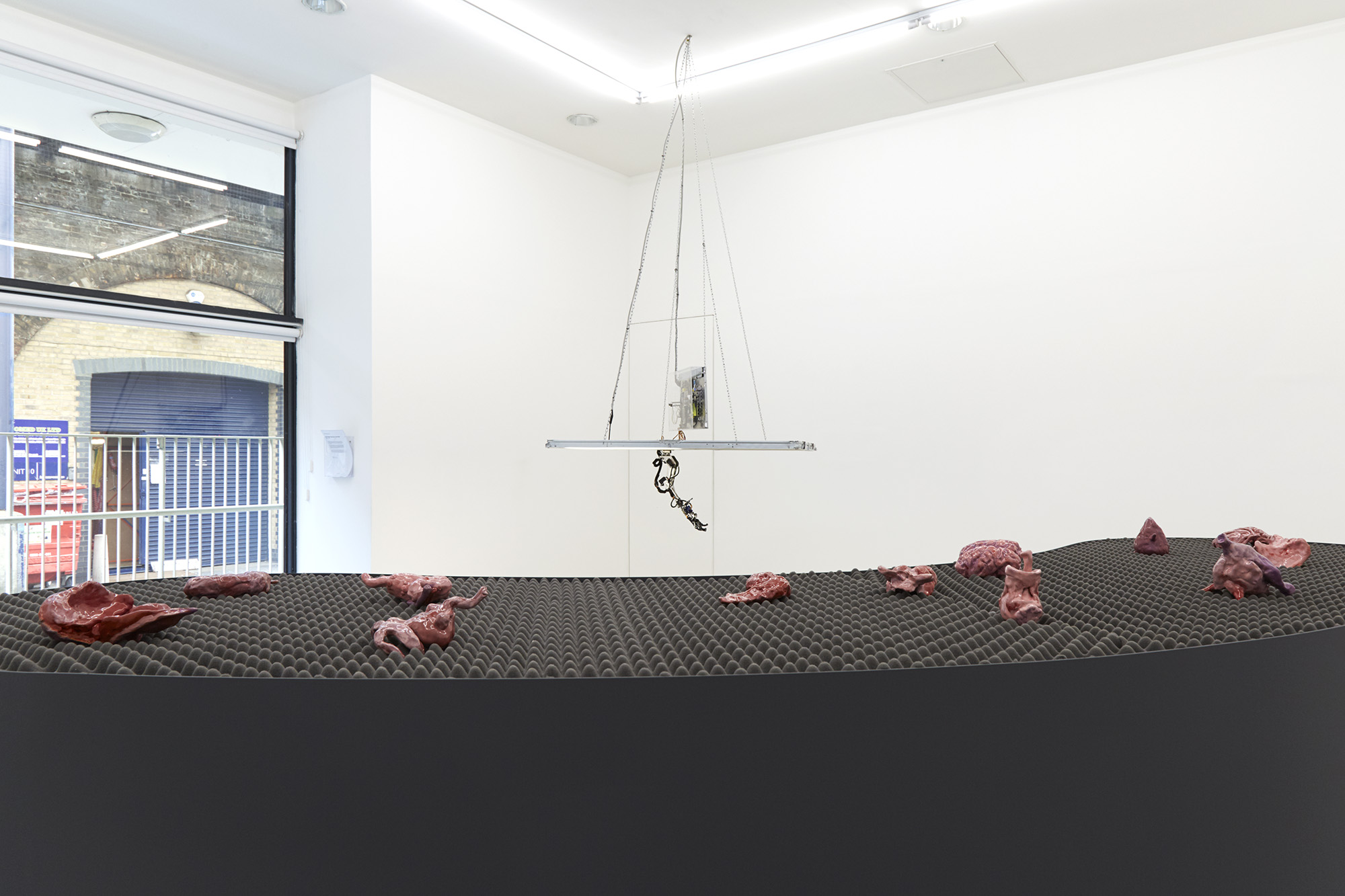 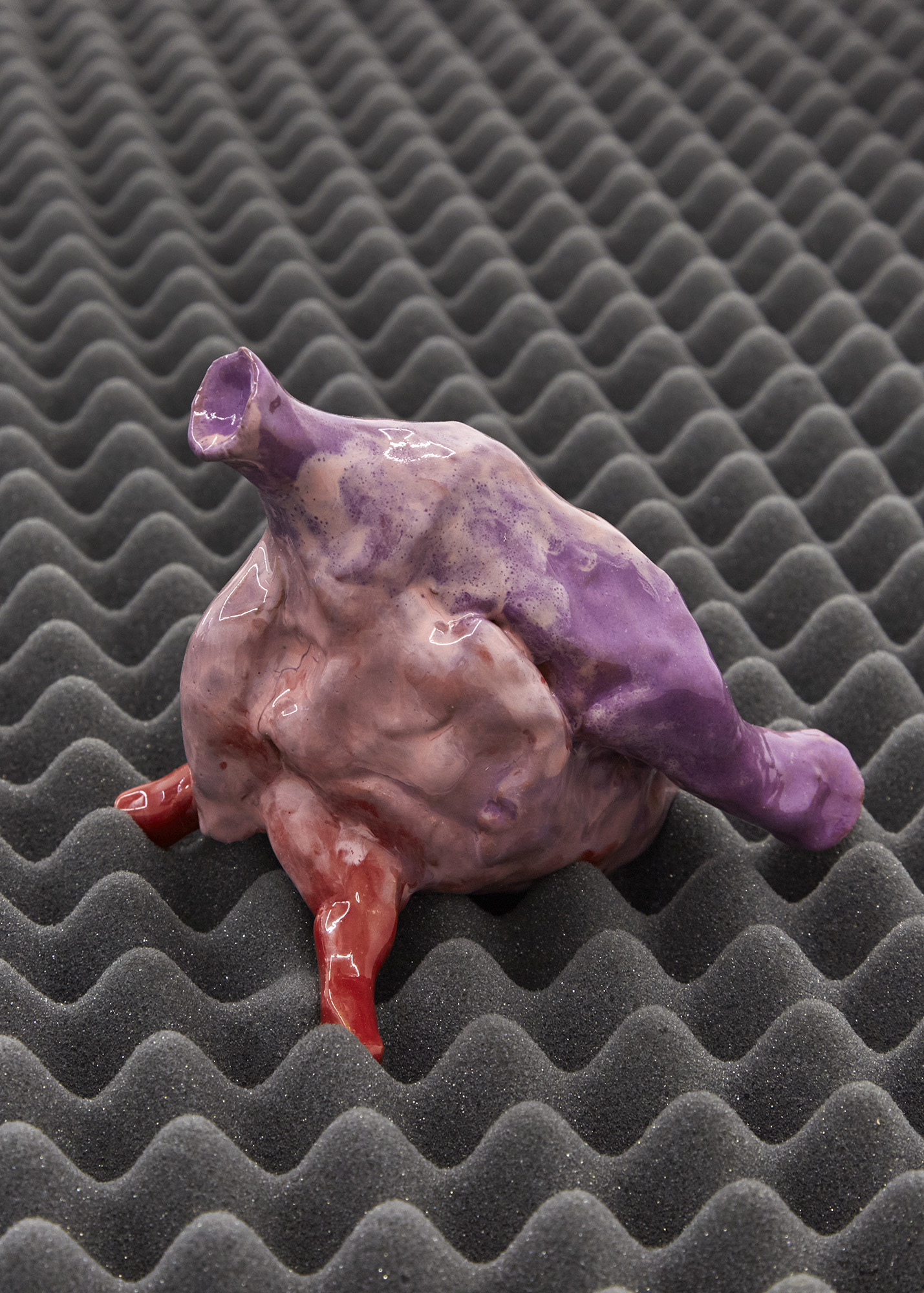 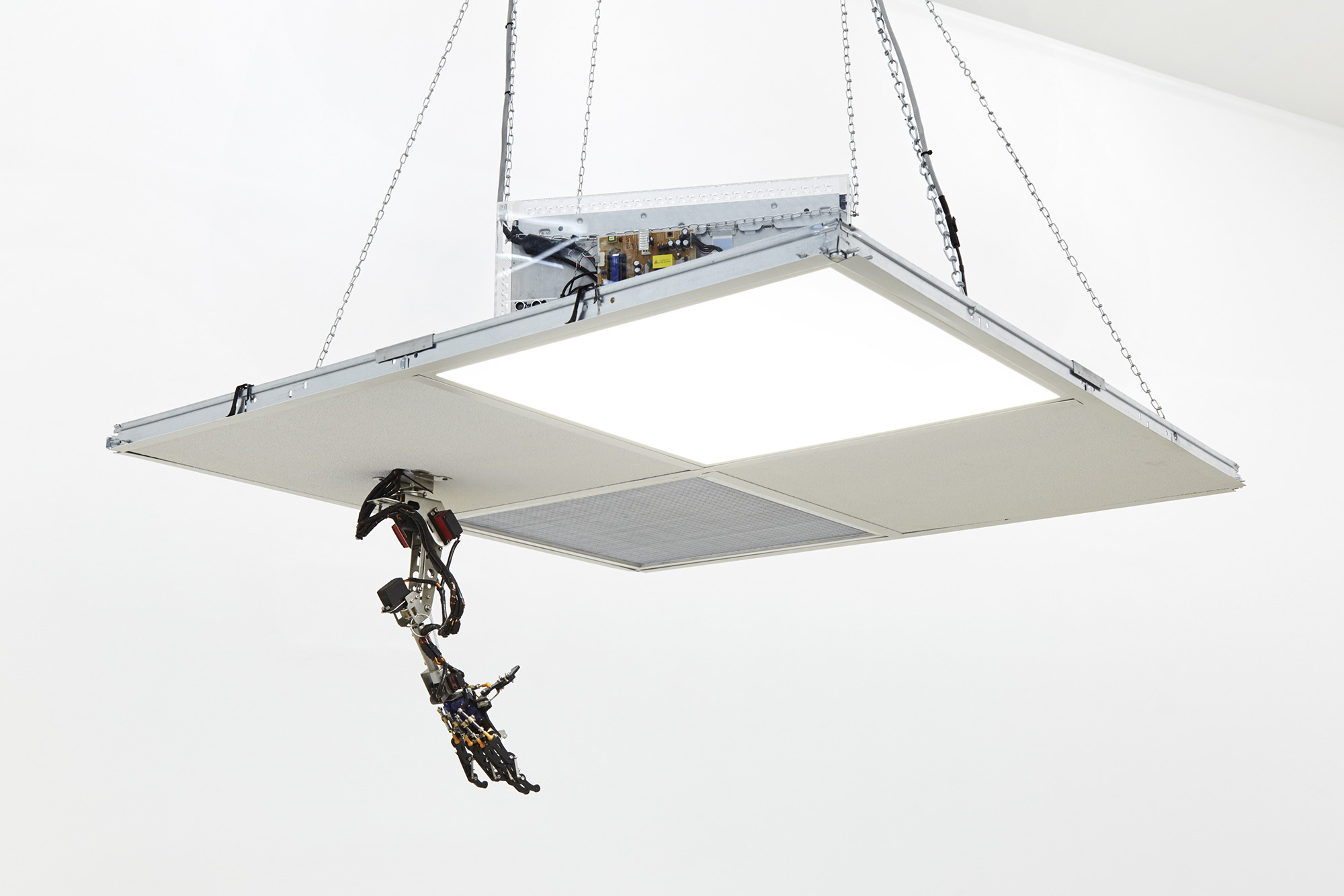 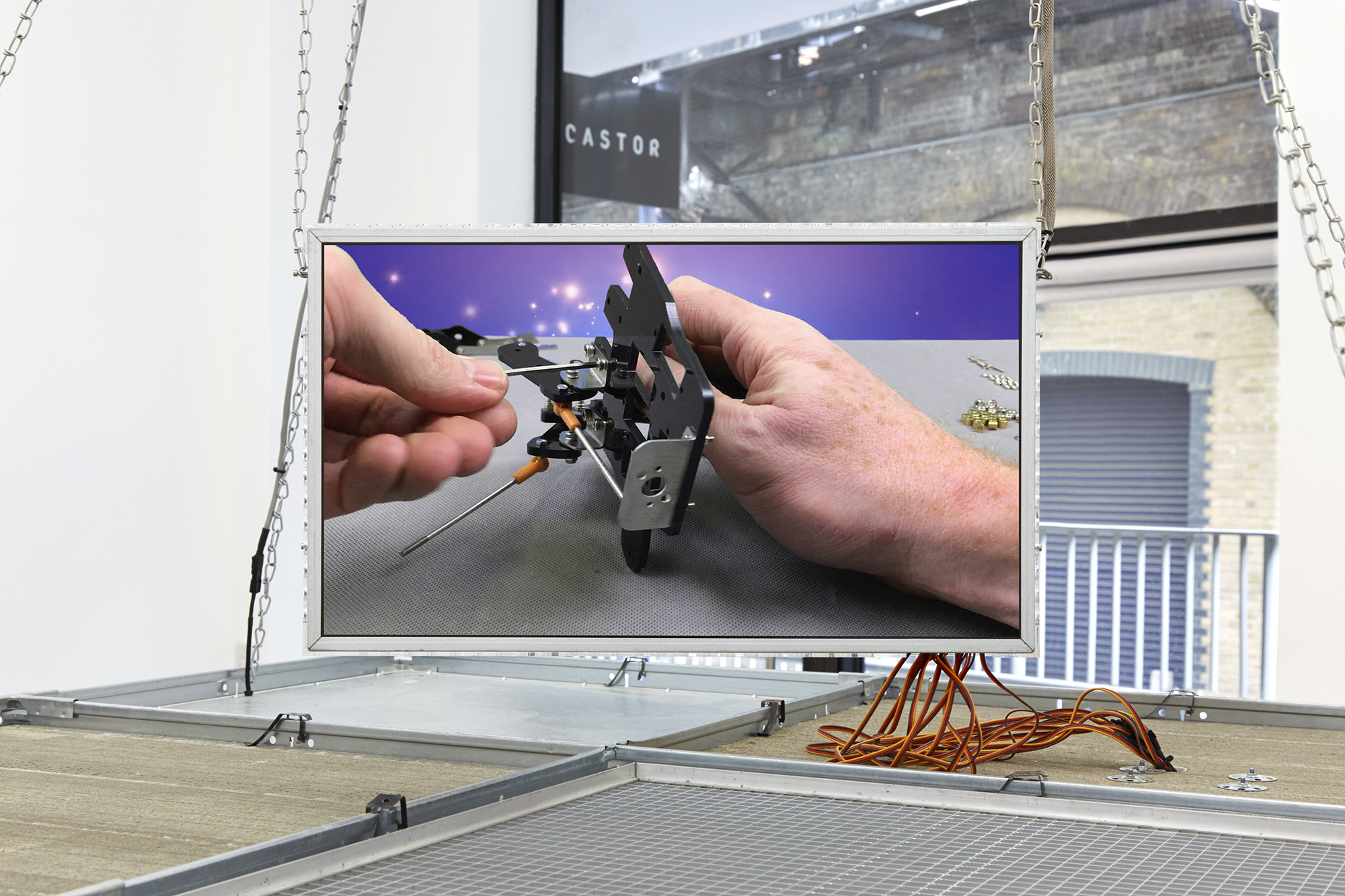 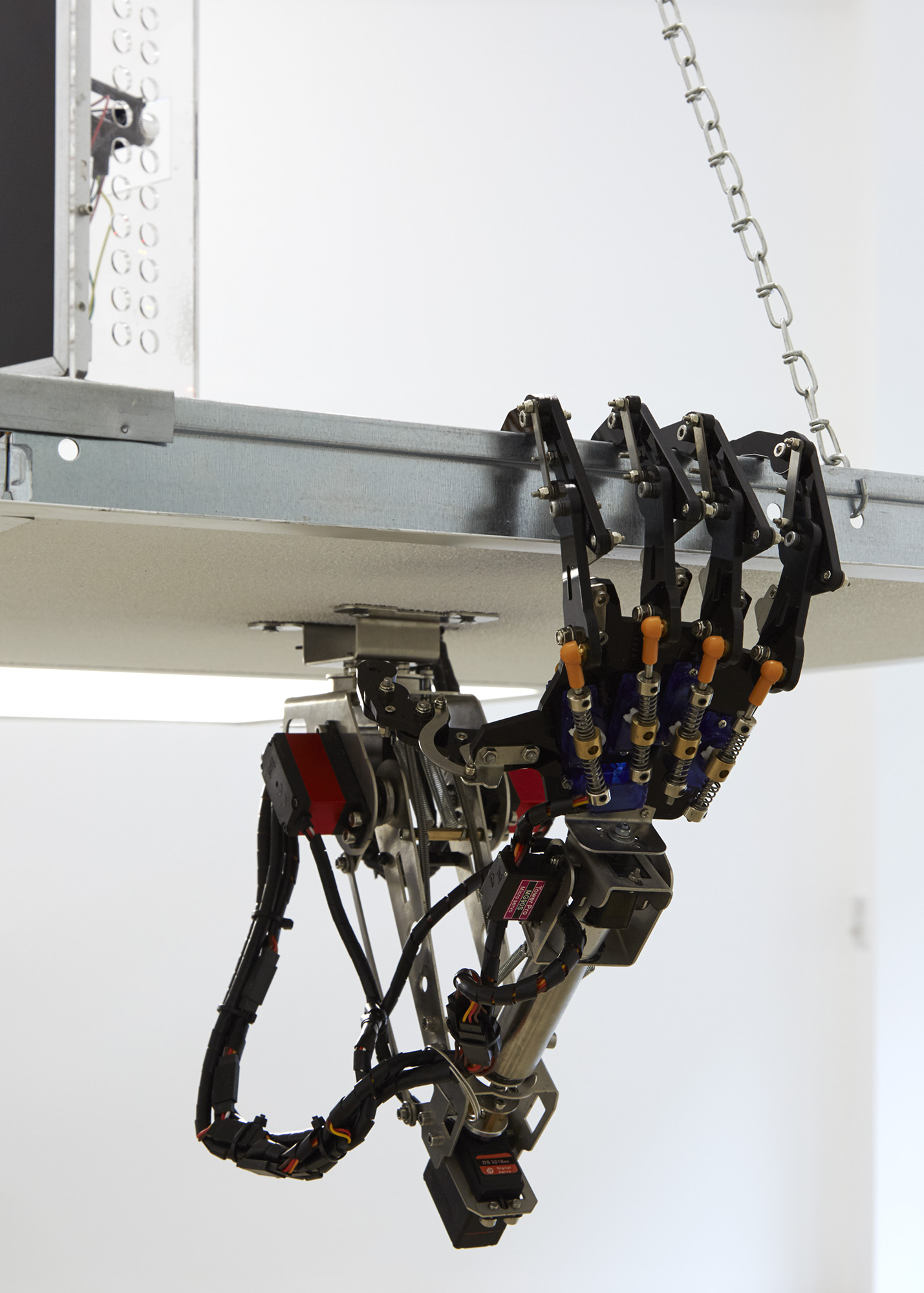 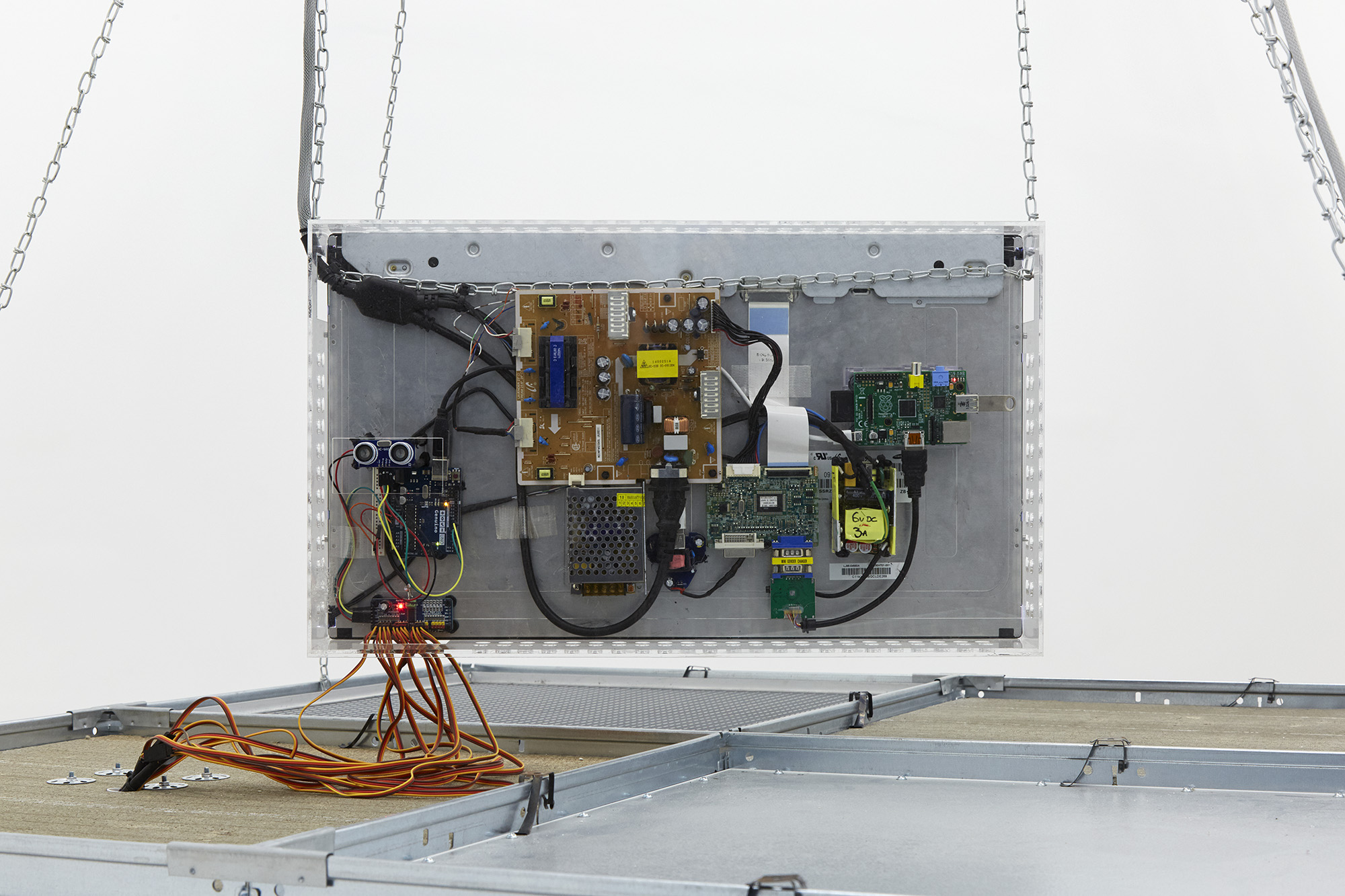 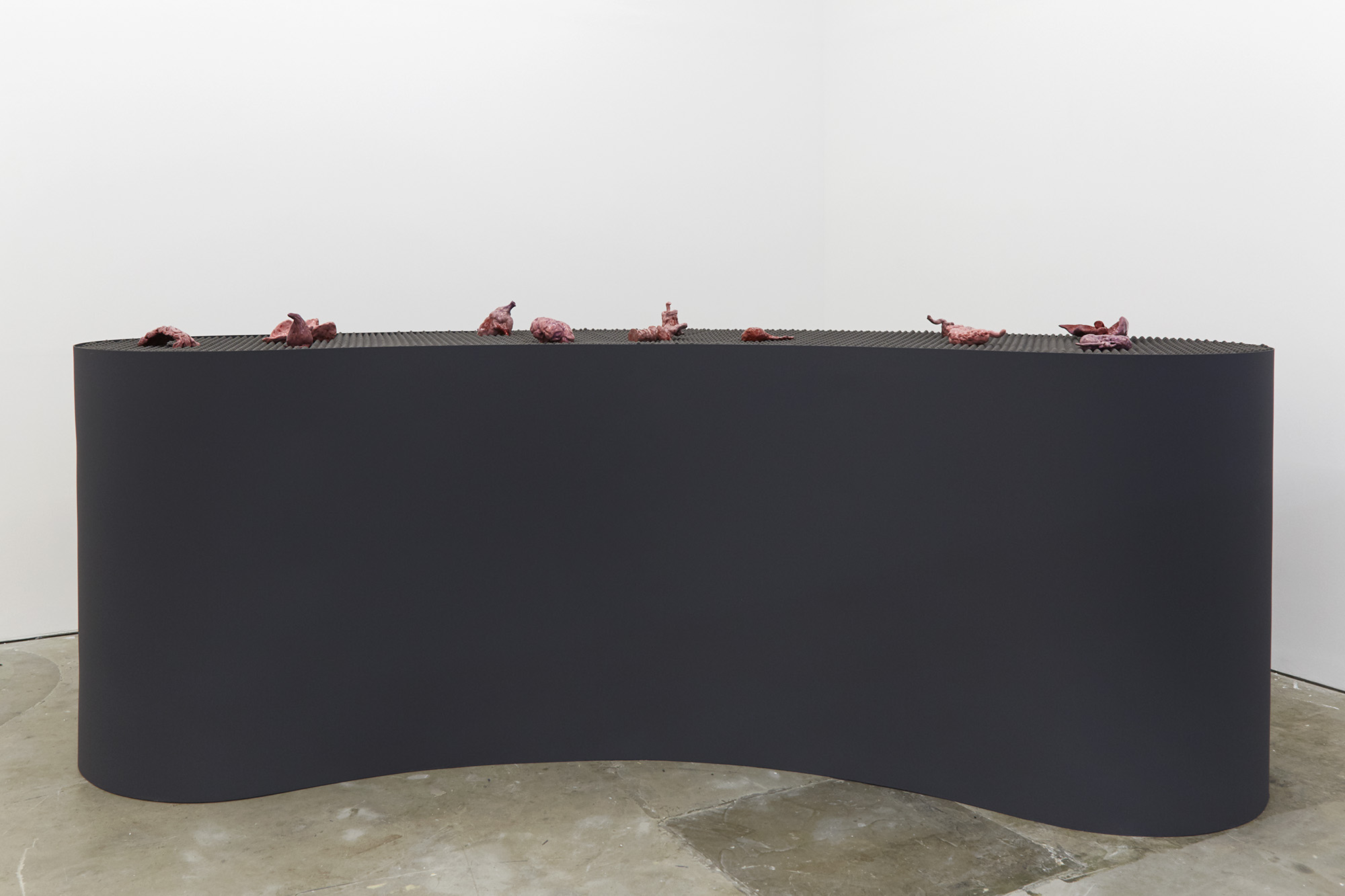 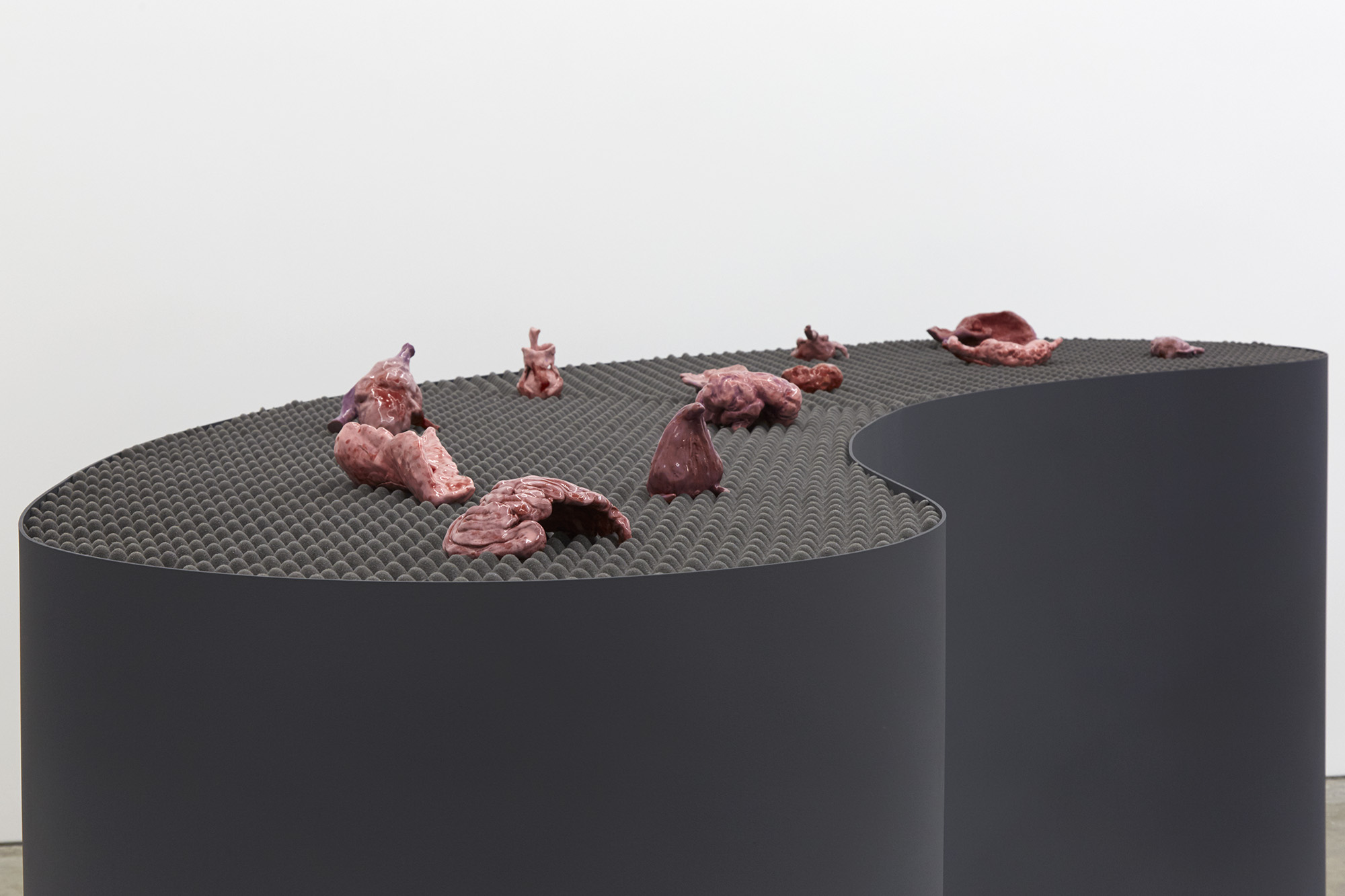 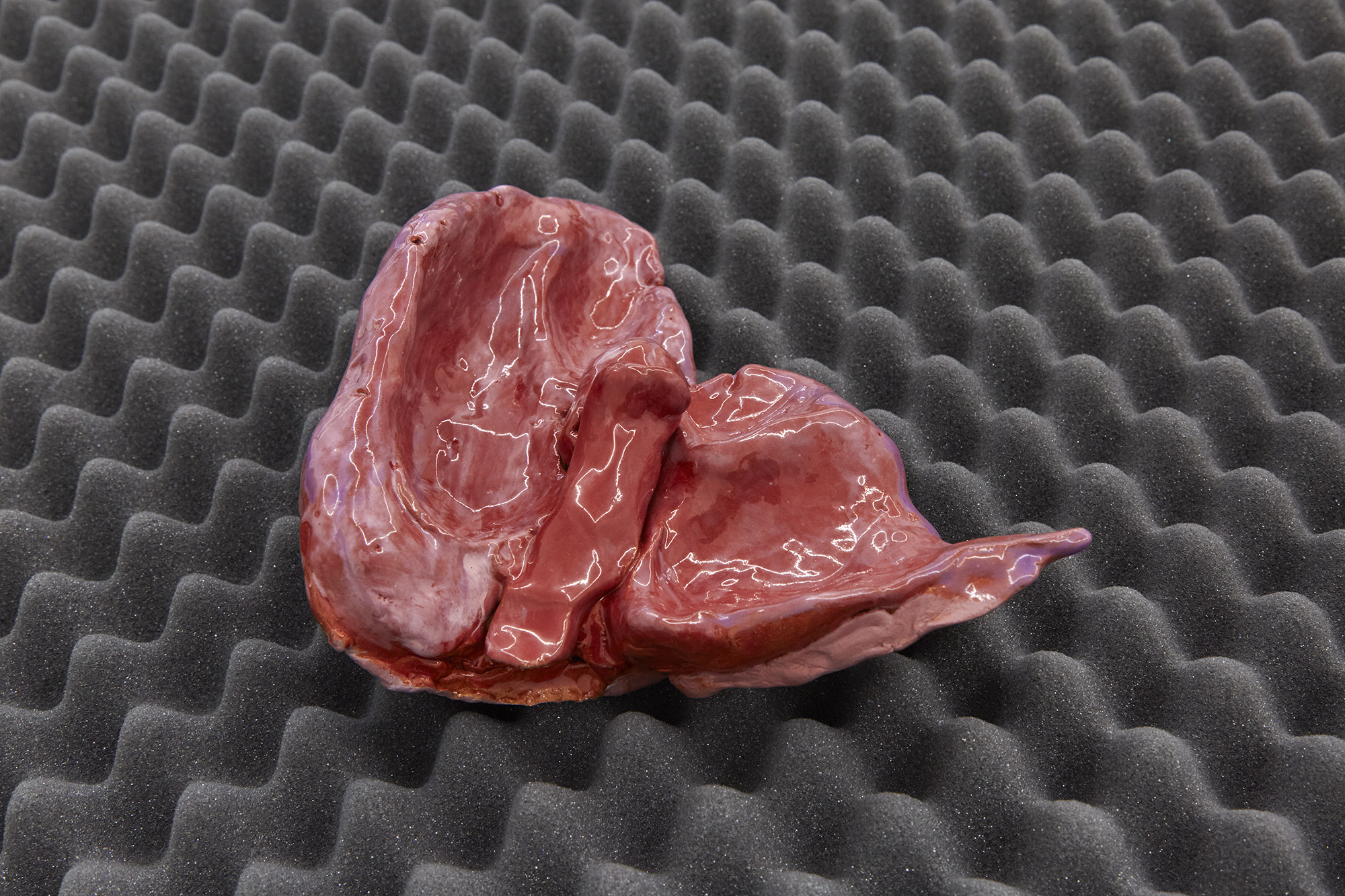 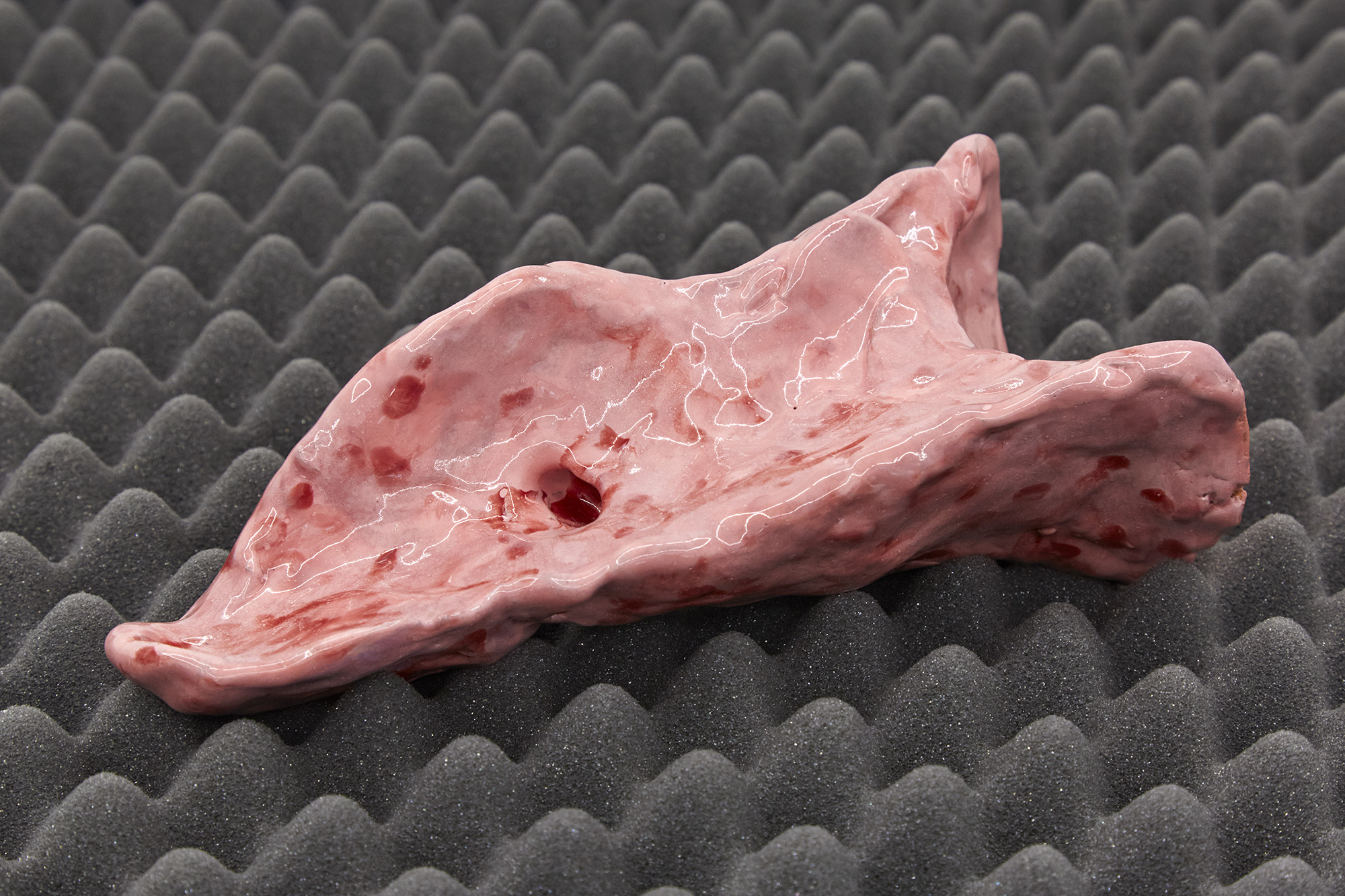 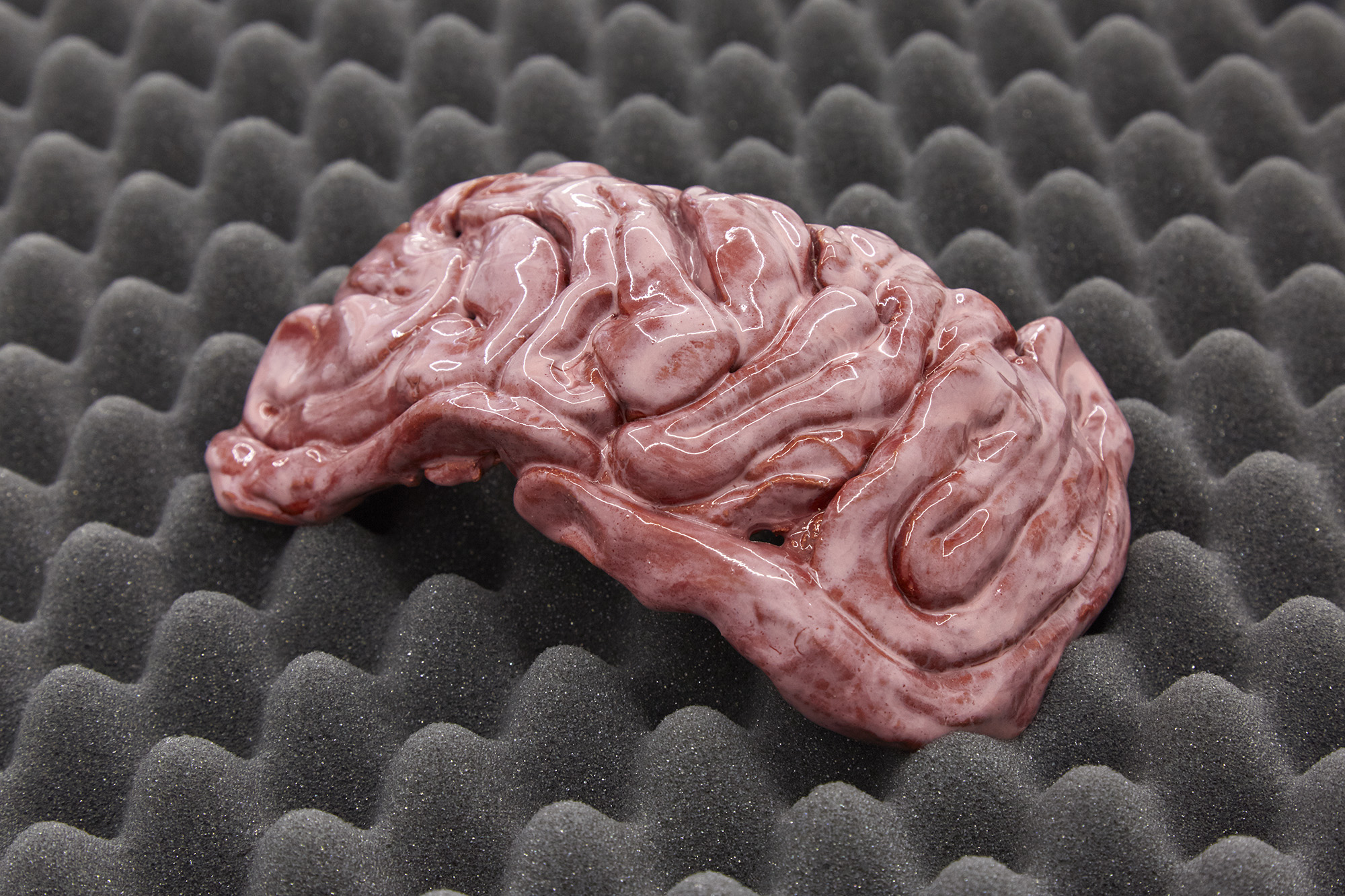 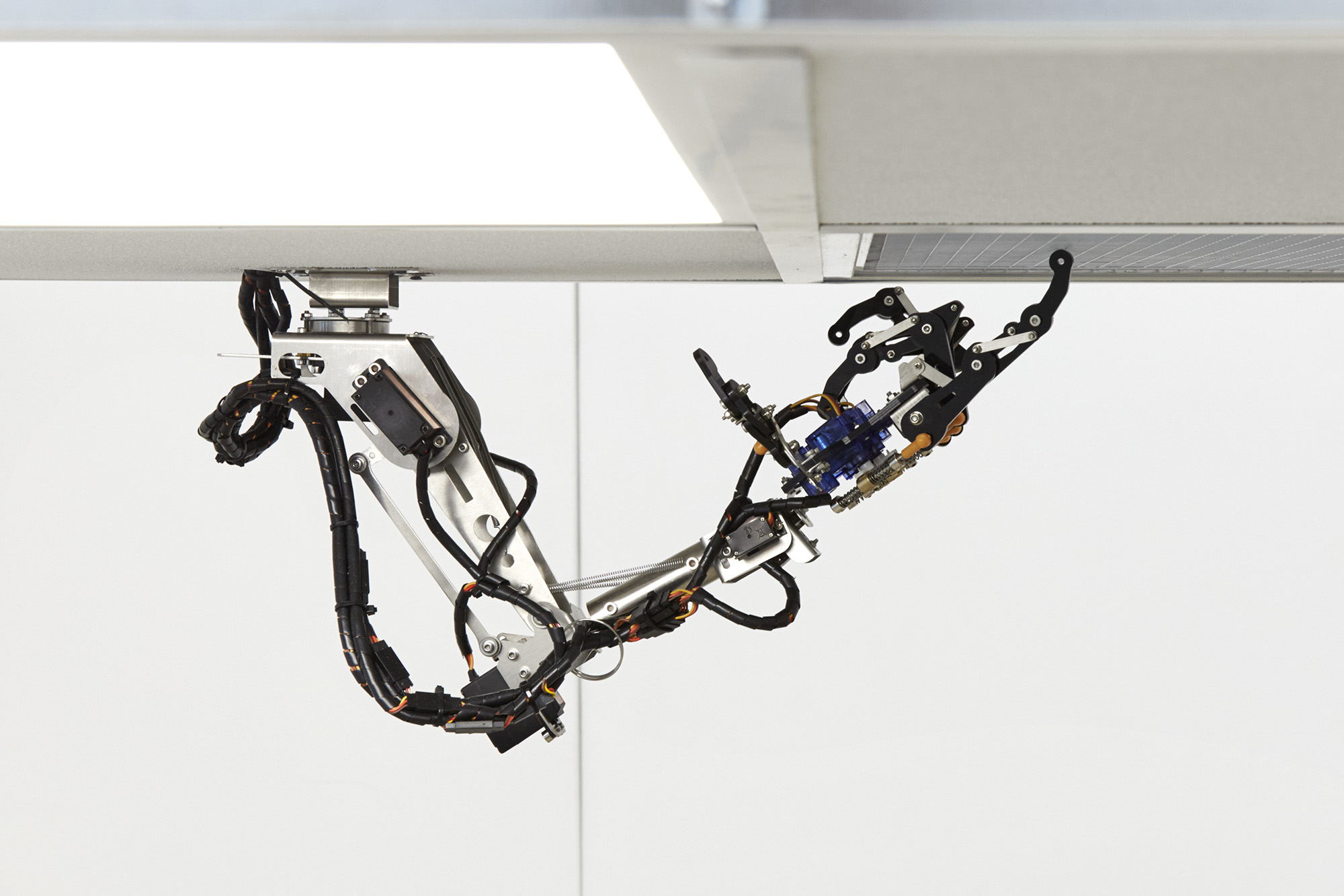 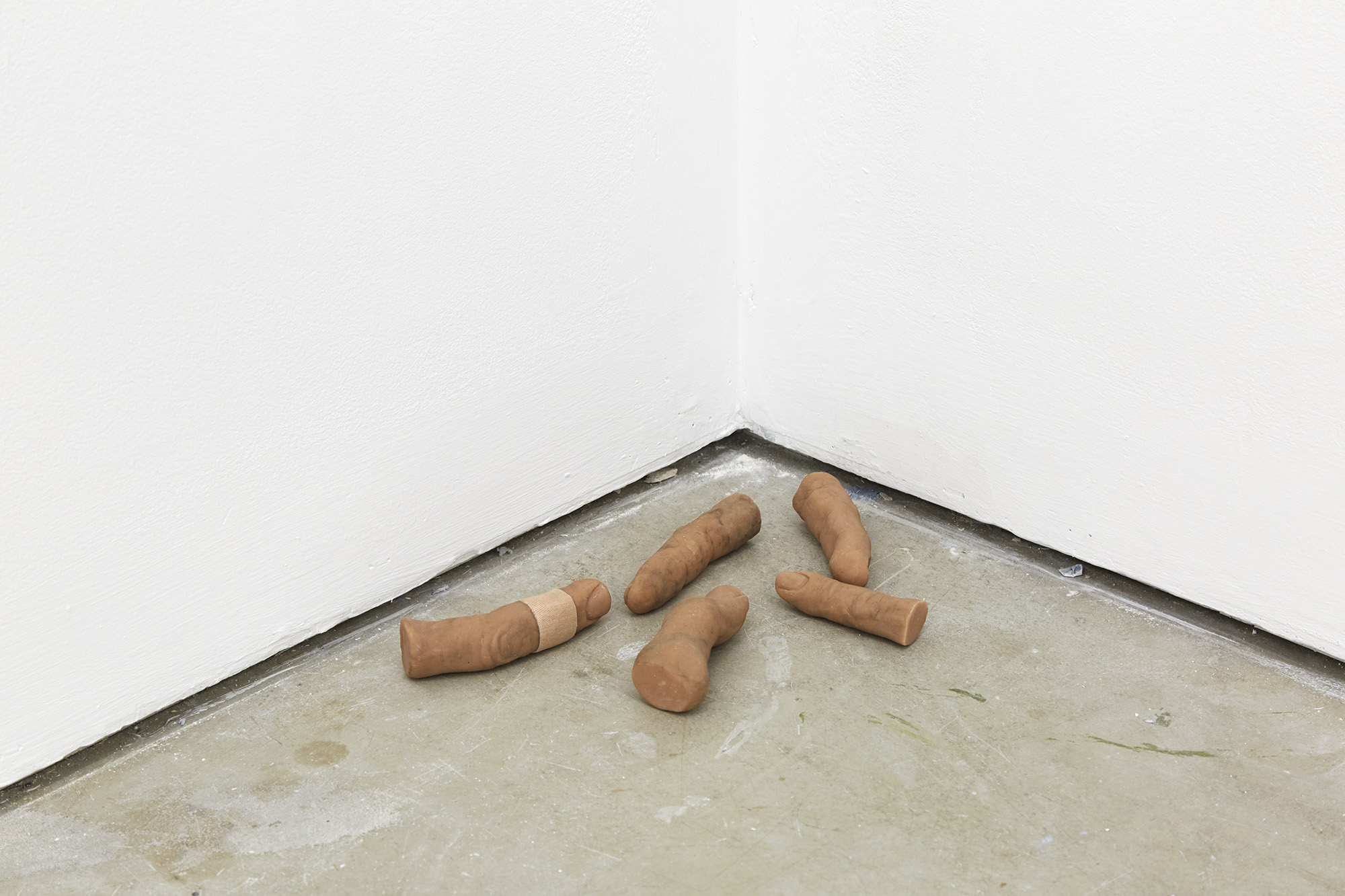 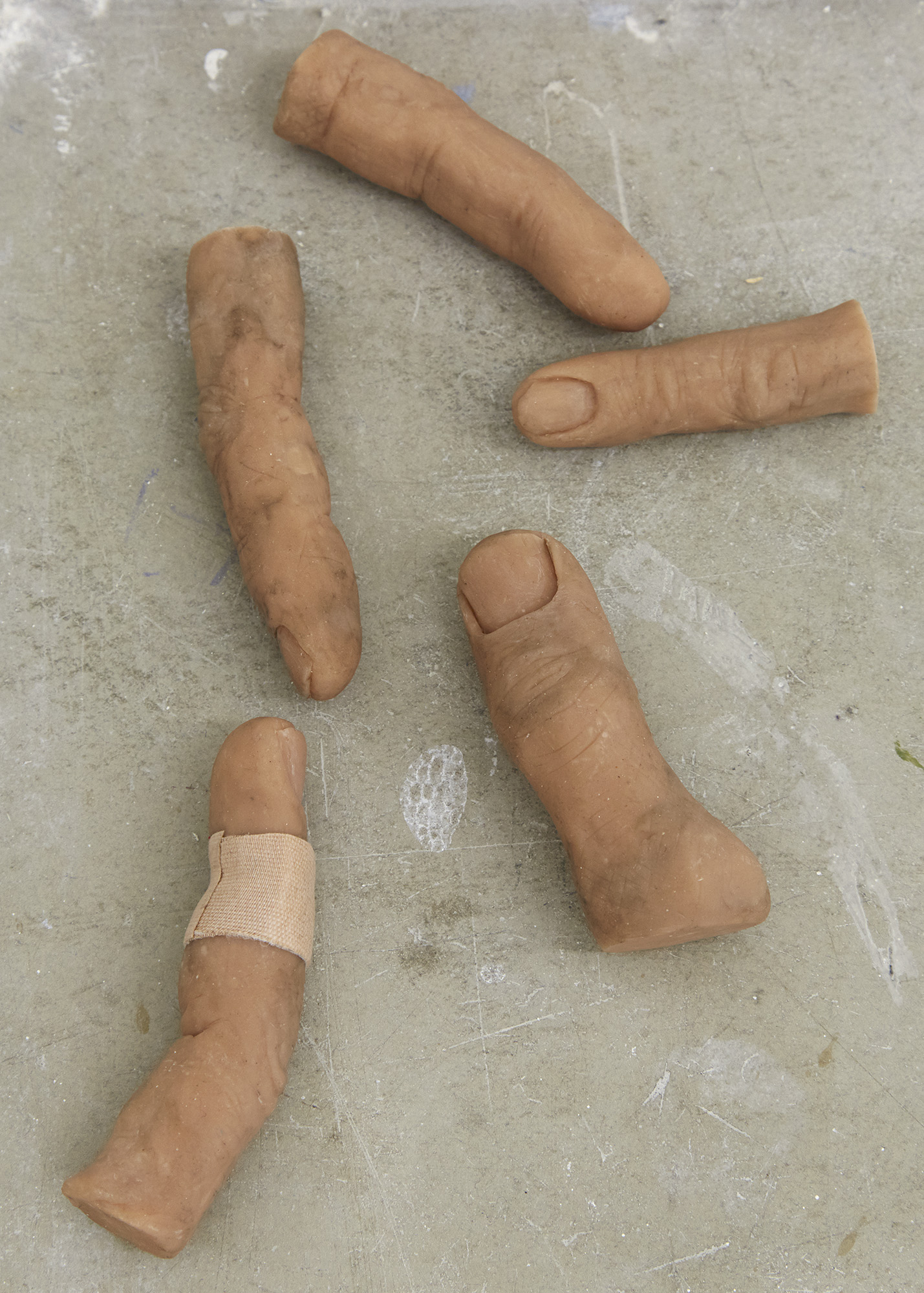 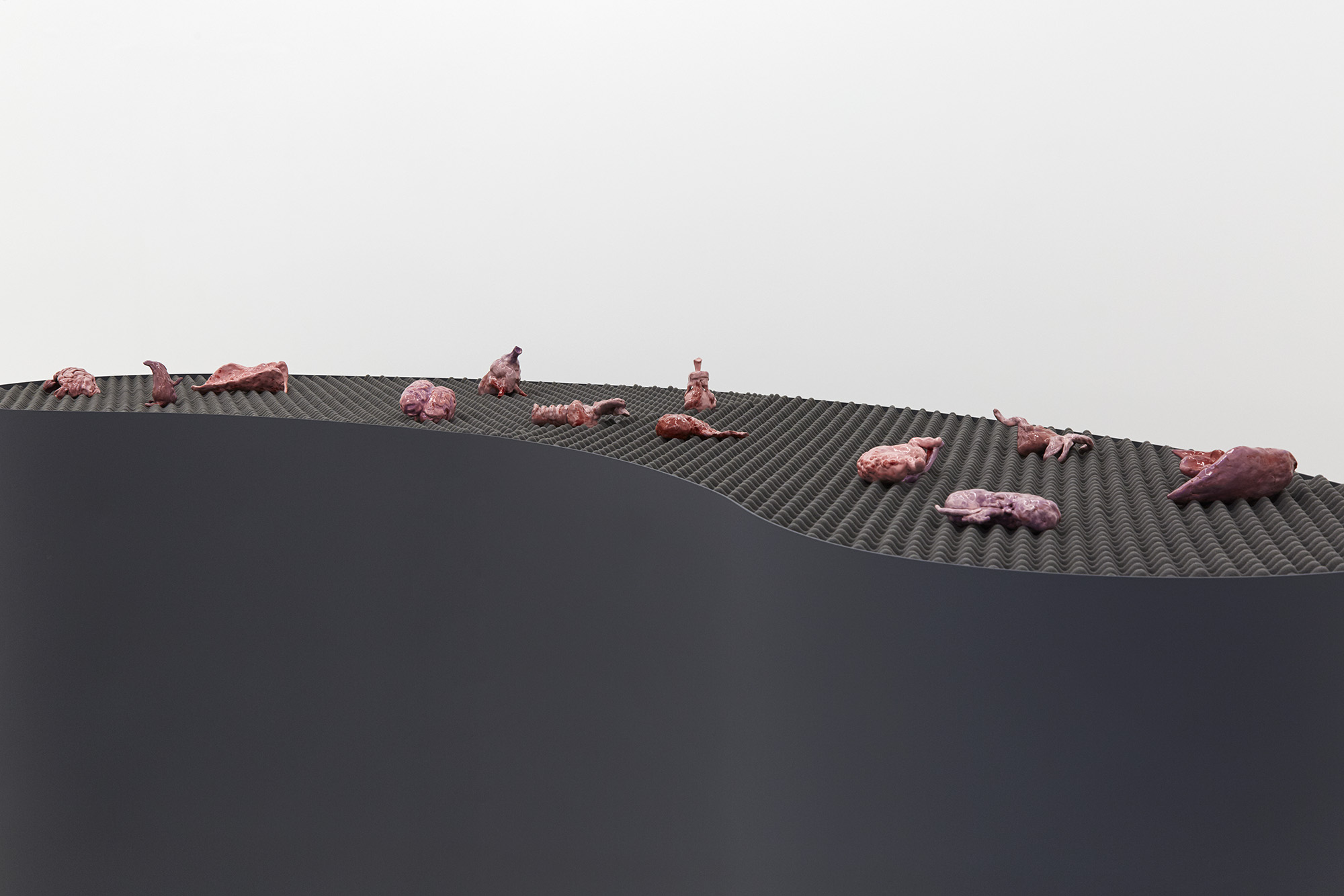 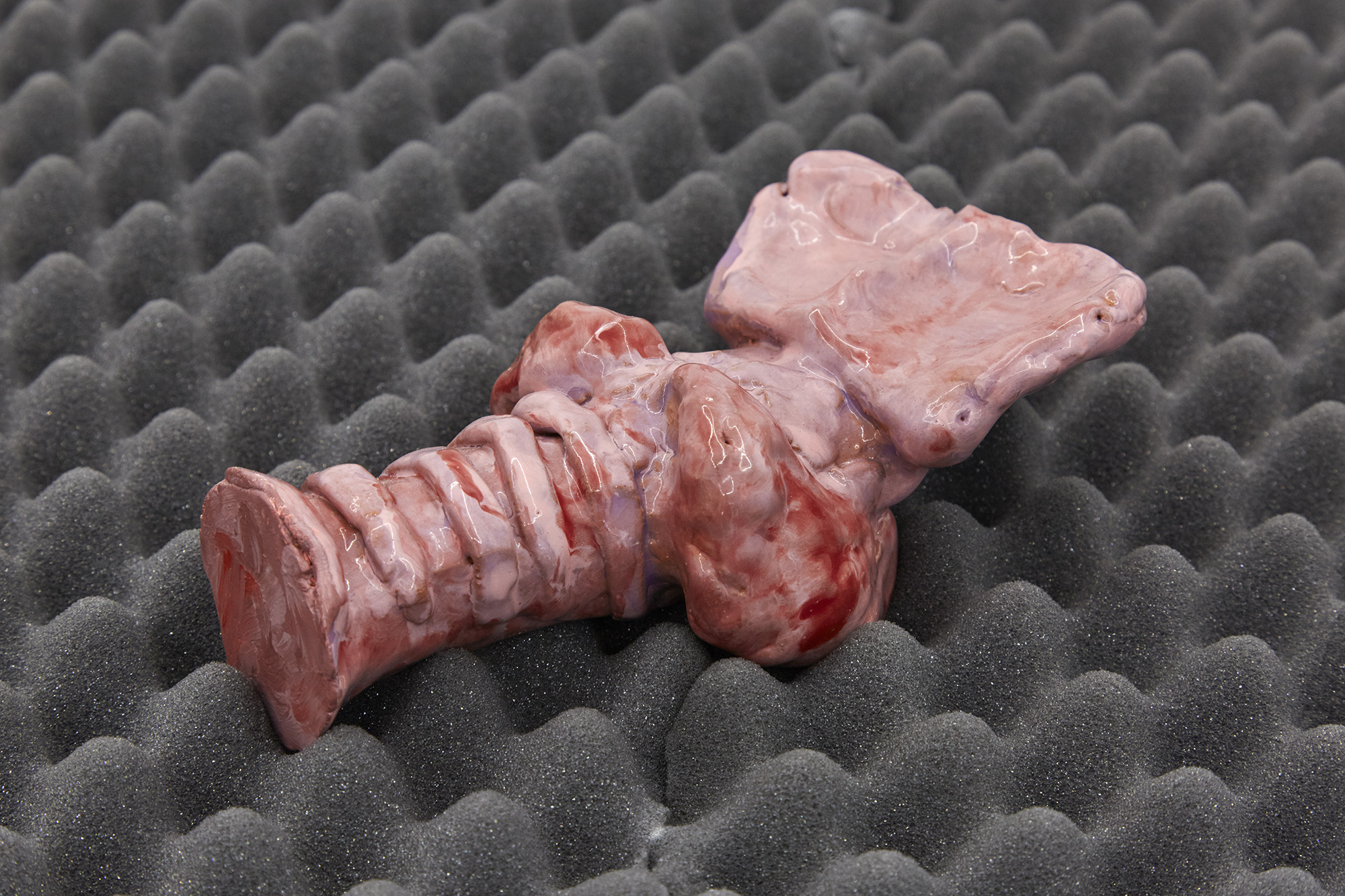 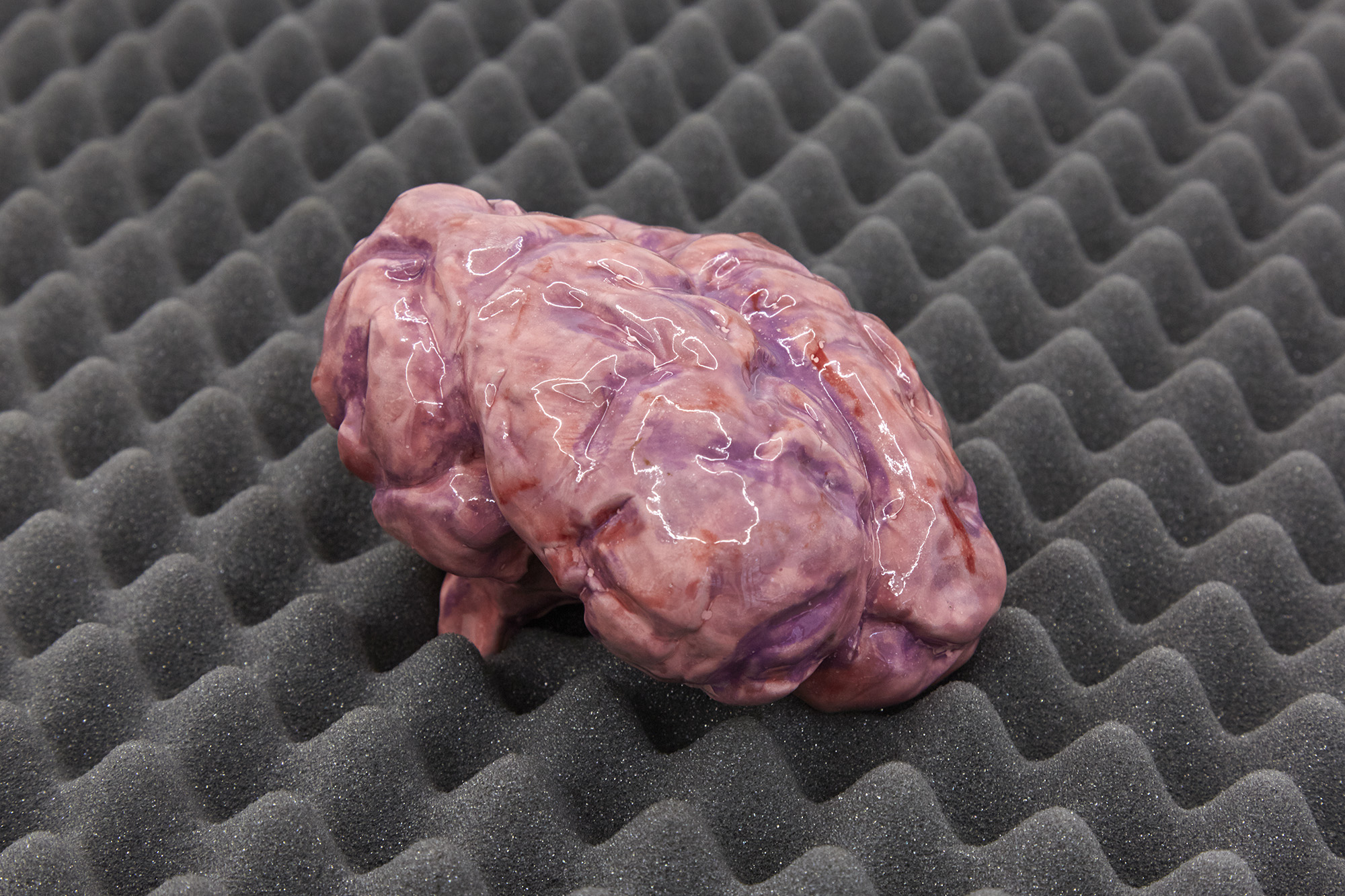 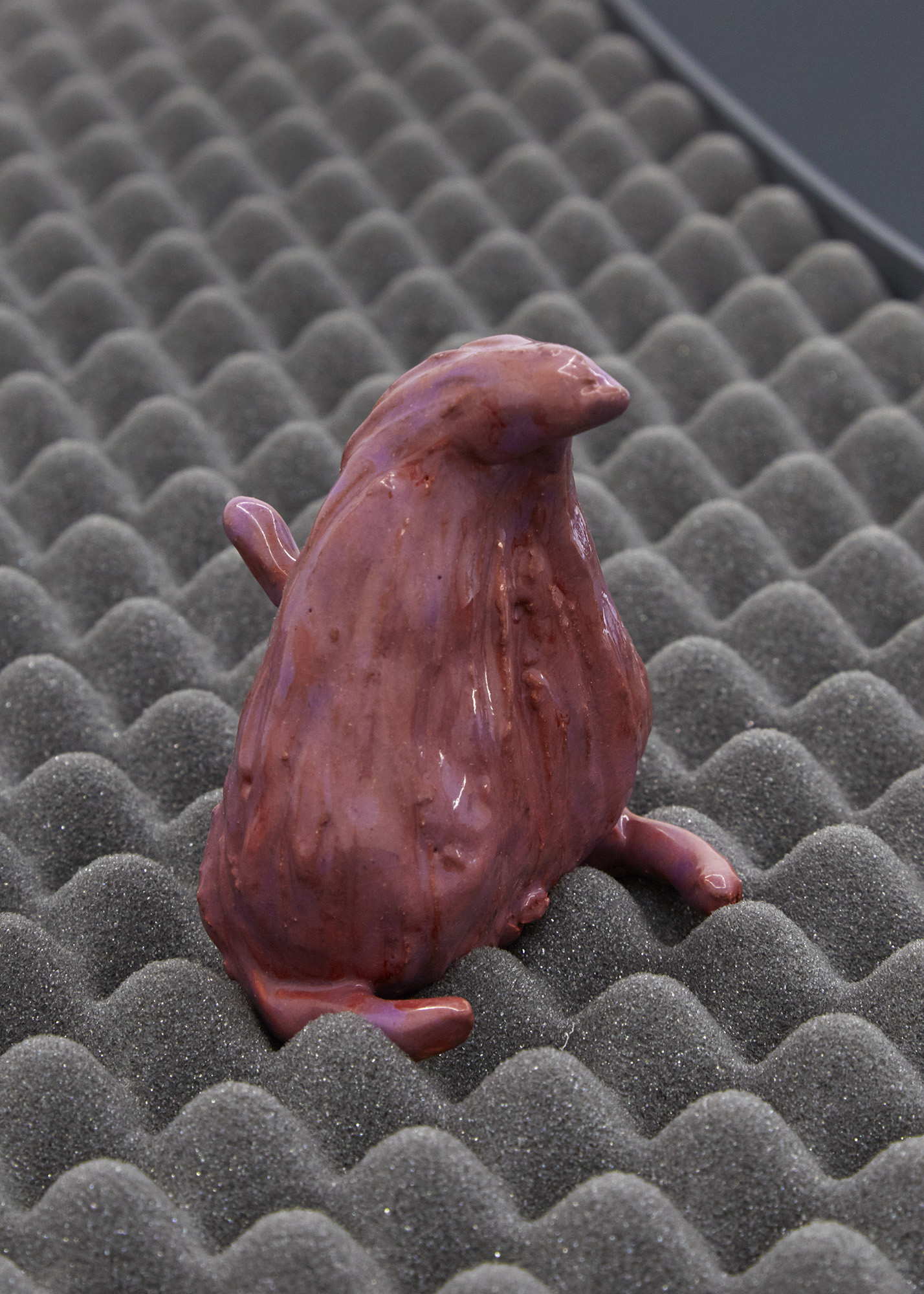 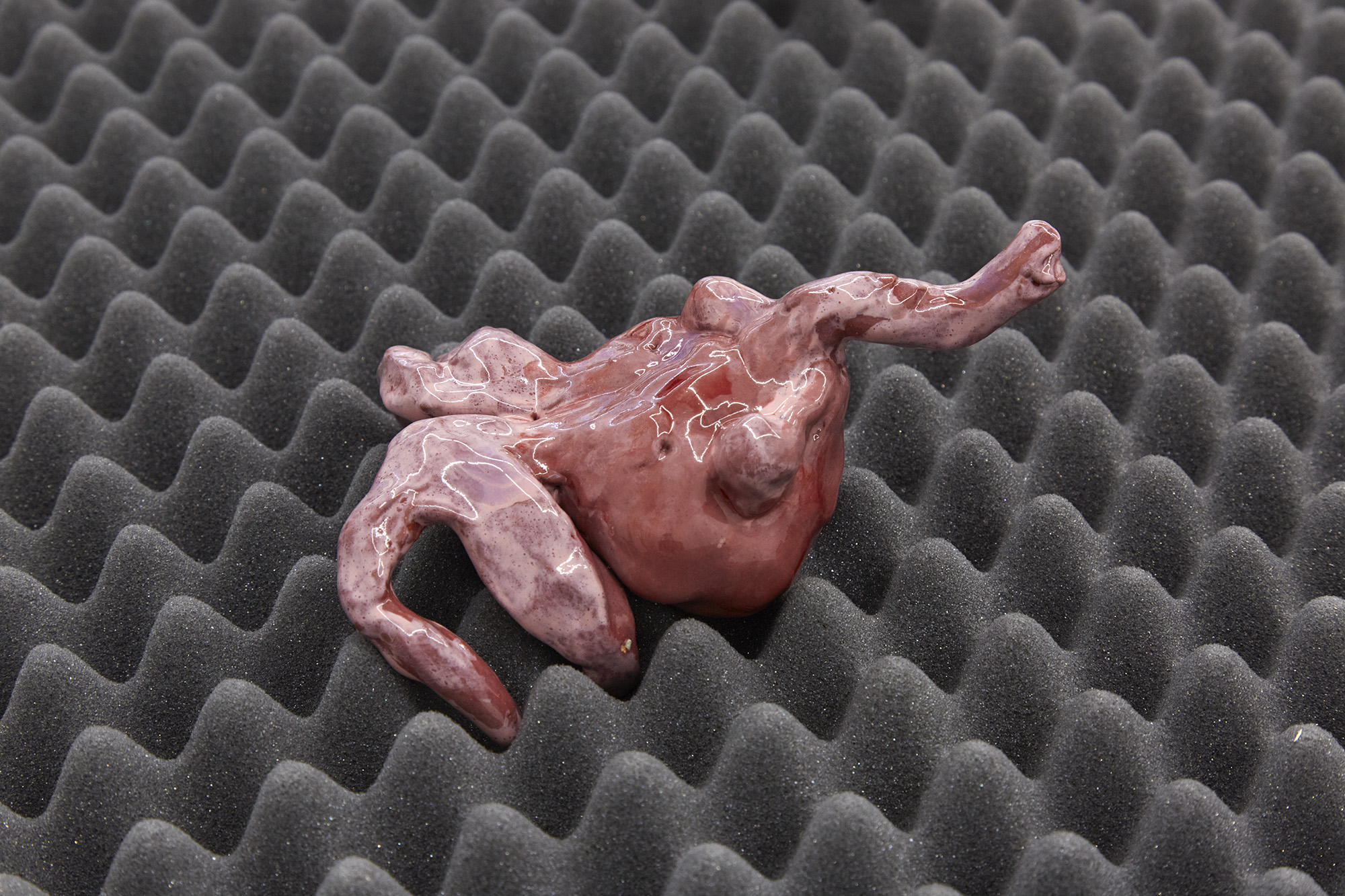 Immaterial Organs: Prostate - Glazed ceramic, 2019
Castor is pleased to present Alan Magee’s second exhibition with the gallery; Data Dust, Dust Data, developed during his residency at The Fire Station Studios, Dublin. Encompassing a diverse range of processes, from Virtual Reality, Robotics, Video and Ceramics, this exhibition explores ideas of technology, materiality and the agency of the labouring body.

Data Dust, Dust Data evolved from a broader exploration around the social and cultural role of technology and the value of labour. Noting, that as technological advancements in AI and Automation increasingly become the dominant mediators of human experiences and practices, our direct engagement with materiality inversely decreases. As such, a focal point of this show is the exploration between the handmade and automated or the virtual and the material.
Kindly supported by

Review by Rebecca Morrill for this is tomorrow
Periodically, in curatorial and museological circles, studies appear and debates rage about why an exhibition visitor is more likely to turn left or turn right upon entering a gallery space. Some believe the decision to be driven by an individual’s innate predisposition or their cultural background, while others think it is dictated by the display itself – the curator’s choice. Upon entering ‘Data Dust, Dust Data’, Alan Magee’s second exhibition at Castor Projects, the visitor is immediately confronted by two contrasting artworks: go left towards a hanging, high-tech exhibit that includes a tangle of wires and exposed circuitry and a motionless robotic arm, or right towards a chest-height, curvilinear plinth topped with black foam and displaying a dozen small, pinkish objects. While I know from experience that I naturally tend to go left in galleries (as a former curator, I pay attention), and don’t normally consider myself a technophobe when it comes to art, on arrival I find myself hesitant about engaging with the mess of electronics, and move slowly towards the lower-tech offer: the more obviously ‘traditional’ work in the show.
‍
That there are two such differing options is not untypical of Magee, whose artistic practice is described by his gallery as crossing many disciplines. The artist’s website reveals the material variety of his work, which includes objects crafted in wood, intricate pencil drawings, moving-image pieces and sculptures composed of manipulated everyday items. Recurrent in his recent work, however, has been an exploration of the subject of labour in the contemporary world.

A closer look at the pink sculptures reveals them to be glazed ceramics, the size and shape of twelve internal organs – heart, brain, lung, kidney and so on. The glazing, in swirling, coagulating tones of reds, pinks and purples, makes them appear convincingly and unnervingly life-like: wet and raw, as though lifted from a human body just moments earlier and carefully laid out – perhaps for immediate transplant into a needy recipient, perhaps for some other, more sinister purpose. Their placement onto black, textured shipping foam, rather than the sterile stainless-steel surface of an operating theatre, prompts my thoughts to wander to illicit organ harvesting and the underground trade in healthy organs for financial gain. The sight of the brain, in particular, makes me shudder, bringing to mind a story about a surgeon who recently claimed to have successfully transplanted a human head from one corpse to another. Perhaps I should have started with those electronics after all.

I move towards this second piece. Despite the jumble of wires on one side, the front of the screen is functioning normally, a reminder that we are no more used to seeing the internal workings of a computer than we are our own bodies. The screen shows a video resembling an amateur instructional film, the type you might watch on the Internet to show you how to make something. In it, a pair of man’s hands grapple with Meccano-like components: connecting and tightening (and sometimes dropping) tiny screws, nuts and bolts to metal plates, wires and plastic parts. Like an aspiring YouTube star, the maker has edited the film to add a moving starfield background, as though undertaking this task in deep space. It soon becomes apparent that he is building a robotic arm and hand – perhaps the very same one hanging limply from the horizontal panels suspended beneath the monitor. Just as I make this connection between on-screen and real life, the robotic hand whirs into life, jerkily swinging and grasping at the air around it in an unnervingly aggressive manner, as if it has suddenly become aware of my presence and is asserting its territorial rights. I feel vindicated in my initial wariness around this technology: those bloodied organs might be been viscerally repellent, but at least they weren’t out to get me.

My heart-rate returning to normal, a few minutes later, the hand moves again. This time it seemed more pathetic than malevolent – grasping the ceiling panels from which it is suspended as though trying to pull itself up. A few minutes later it moves again, but this is now more gentle, and subtle. Perhaps it was warming to me after I had initially startled it – as much as it startled me – and now we could be friends. Sure, I know it is just a robot, with a pre-programmed set of actions, coded to be random and probably triggered by some motion detector, and evidently made by human hands – yet I can’t quite shake the thought that it might have its own consciousness. This anthropomorphism is further reinforced in a captivating moment in the video, when the maker’s hand cradles the metal hand: the fingers of both curling inwards at once: human and robot in synchrony. In this most elemental of human gestures – the grasp reflex, one of the first movements a newborn makes has, in fact, already begun in utero – the robotic hand appears more familiarly human than a disembodied internal organ.

The dichotomy of humanity-versus-technology is central to Magee’s exhibition, which he has entitled ‘Data Dust, Dust Data’. The word ‘Data’ is common computer terminology for immaterial information, while ‘dust’ is more connected to earth, to clay and to the ultimate destiny of every human body: ‘ashes to ashes, dust to dust…’ In its repetition and, the title also sets up two concepts: ‘data dust’ / ‘dust data’ – which came first? Intangible thought or physical matter? What is the dust of data? Is there data in dust?

Such duality is also present in the configuration of the hanging piece, ‘Celestial Machines’. Four square panels, suspended so they hang 137cm from the ground, are the generic type found in offices worldwide, a drop-ceiling system created to hide from view the functional guts of the building – pipes, cables, etc. – much like our own internal circulatory, respiratory and digestive systems beneath the skin. In showing a section of ceiling at this lower height, Magee offers the viewer an angle not normally seen, revealing dual worlds simultaneously: above and below, heaven and hell, human and robot.

In the gallery’s office, a third part of the exhibition is displayed. Another video, this one simply titled documentation film, as though it is merely supplementary. Yet this piece is actually key to understanding how the disparate aspects of Magee’s exhibition come together. The video shows the same man’s hands, but here they are crafting a form out of clay, one of those ceramic organs (the liver, I later find out, having been unable to identify it for certain: another reminder of how much more alien are our own interior bodies than so much of the world around us). He is moulding the clay by touch, his eyes covered with a VR headset. A large projection behind him shows what he sees: a 3-D visualization of the liver, which can be manipulated to present different angles by movement of his head. Without sight, the task of working the clay is clearly arduous and challenging, and as fiddly as building the robotic arm. It requires extreme concentration to hold onto the mental image of the overall shape and its every detail, and his face wears a stern expression. Eventually he removes the headset and looks at his handiwork: a slight smile flickering across his face as he sees the result to be not entirely inaccurate. The whole sequence brings to mind the use of technology in contemporary medical settings, where a specialist surgeon might direct an operation remotely, connected in real-time to give instructions to others, or indeed control a robotic surgeon, one that is capable of far more precision than even the most skillful and steady human hand. Perhaps human hands are outdated technology.

Returning to the main gallery space to examine the ceramics once more, I notice an element I had missed the first time. In the back corner, on the floor, lies what appears to be five life-sized fingers: severed, but not gruesomely so (no hints of blood or gore on these), these were cleanly cut and cast to one side, as though simply no longer required. In a near future where the human body can be reduced to a set of saleable organs, the hand – with its species-dominating opposable thumbs – seems set to be superseded by a superior, artificial version. It may replicate our five-fingered form, its movements may initially ape something recognizably human, but eventually it will take over, humankind replaced by the very artificial life we ourselves have created, and so the archetypal dystopian Hollywood scenario plays out.

Yet Magee’s exhibition doesn’t offer any such dramatic or conclusive endings. In ‘Data Dust, Dust Data’ the artist examines rather the current moment, where the future is not yet predetermined. He poses questions rather than jumping to conclusions about our shared destiny: Is this where the world is heading? Won’t the imperfect handmade creation also always have a place? Isn’t that what defines humanity and elevates it above artificial intelligence? Won’t some of us always choose to move towards the ‘traditional’ before the technological?We are in an age where yet more people’s jobs are being replaced by machines, some individuals are rejecting automation. We are all too familiar with supermarket self-scan tills that pointlessly say ‘hello’ and ‘goodbye’ in the same pitch and tone to every customer, but can choose to go to a real cashier, where we can comment on the weather, complain about the prices, share a joke. For all the emotion and personality that the viewer might project onto Magee’s robotic hand as it whirs and swings and grasps, what is ultimately more memorable is the small smile on the artist’s face when, freed from the mask of technology, he first sees his own handiwork in clay.